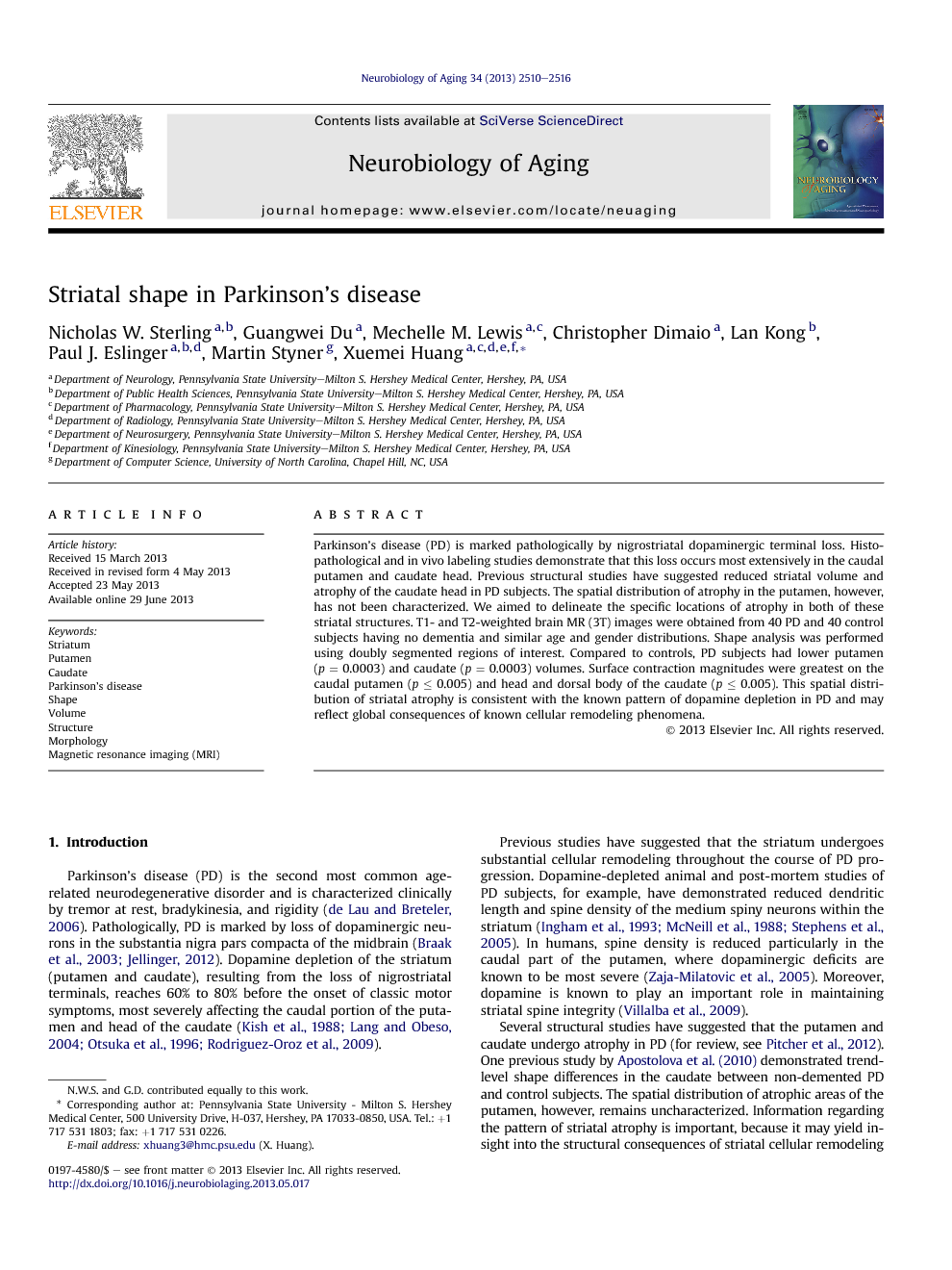 Parkinson's disease (PD) is marked pathologically by nigrostriatal dopaminergic terminal loss. Histopathological and in vivo labeling studies demonstrate that this loss occurs most extensively in the caudal putamen and caudate head. Previous structural studies have suggested reduced striatal volume and atrophy of the caudate head in PD subjects. The spatial distribution of atrophy in the putamen, however, has not been characterized. We aimed to delineate the specific locations of atrophy in both of these striatal structures. T1- and T2-weighted brain MR (3T) images were obtained from 40 PD and 40 control subjects having no dementia and similar age and gender distributions. Shape analysis was performed using doubly segmented regions of interest. Compared to controls, PD subjects had lower putamen (p = 0.0003) and caudate (p = 0.0003) volumes. Surface contraction magnitudes were greatest on the caudal putamen (p ≤ 0.005) and head and dorsal body of the caudate (p ≤ 0.005). This spatial distribution of striatal atrophy is consistent with the known pattern of dopamine depletion in PD and may reflect global consequences of known cellular remodeling phenomena.

Parkinson's disease (PD) is the second most common age-related neurodegenerative disorder and is characterized clinically by tremor at rest, bradykinesia, and rigidity (de Lau and Breteler, 2006). Pathologically, PD is marked by loss of dopaminergic neurons in the substantia nigra pars compacta of the midbrain (Braak et al., 2003 and Jellinger, 2012). Dopamine depletion of the striatum (putamen and caudate), resulting from the loss of nigrostriatal terminals, reaches 60% to 80% before the onset of classic motor symptoms, most severely affecting the caudal portion of the putamen and head of the caudate (Kish et al., 1988, Lang and Obeso, 2004, Otsuka et al., 1996 and Rodriguez-Oroz et al., 2009). Previous studies have suggested that the striatum undergoes substantial cellular remodeling throughout the course of PD progression. Dopamine-depleted animal and post-mortem studies of PD subjects, for example, have demonstrated reduced dendritic length and spine density of the medium spiny neurons within the striatum (Ingham et al., 1993, McNeill et al., 1988 and Stephens et al., 2005). In humans, spine density is reduced particularly in the caudal part of the putamen, where dopaminergic deficits are known to be most severe (Zaja-Milatovic et al., 2005). Moreover, dopamine is known to play an important role in maintaining striatal spine integrity (Villalba et al., 2009). Several structural studies have suggested that the putamen and caudate undergo atrophy in PD (for review, see Pitcher et al., 2012). One previous study by Apostolova et al. (2010) demonstrated trend-level shape differences in the caudate between non-demented PD and control subjects. The spatial distribution of atrophic areas of the putamen, however, remains uncharacterized. Information regarding the pattern of striatal atrophy is important, because it may yield insight into the structural consequences of striatal cellular remodeling and also may provide region-specific biomarkers that reflect PD disease progression. In this study, we aimed to characterize these atrophic sites using a state-of-the-art protocol for segmentation followed by shape analysis using spherical harmonic point distribution models (SPHARM-PDM) (Styner et al., 2005). The present study included only non-demented subjects to avoid potentially confounding influences of dementia-related neuropathology. We hypothesized that striatal shape differences would be greatest in areas that are known to be affected most severely by dopamine depletion and consequent striatal spine pathology in PD, namely, the caudal portion of the putamen.