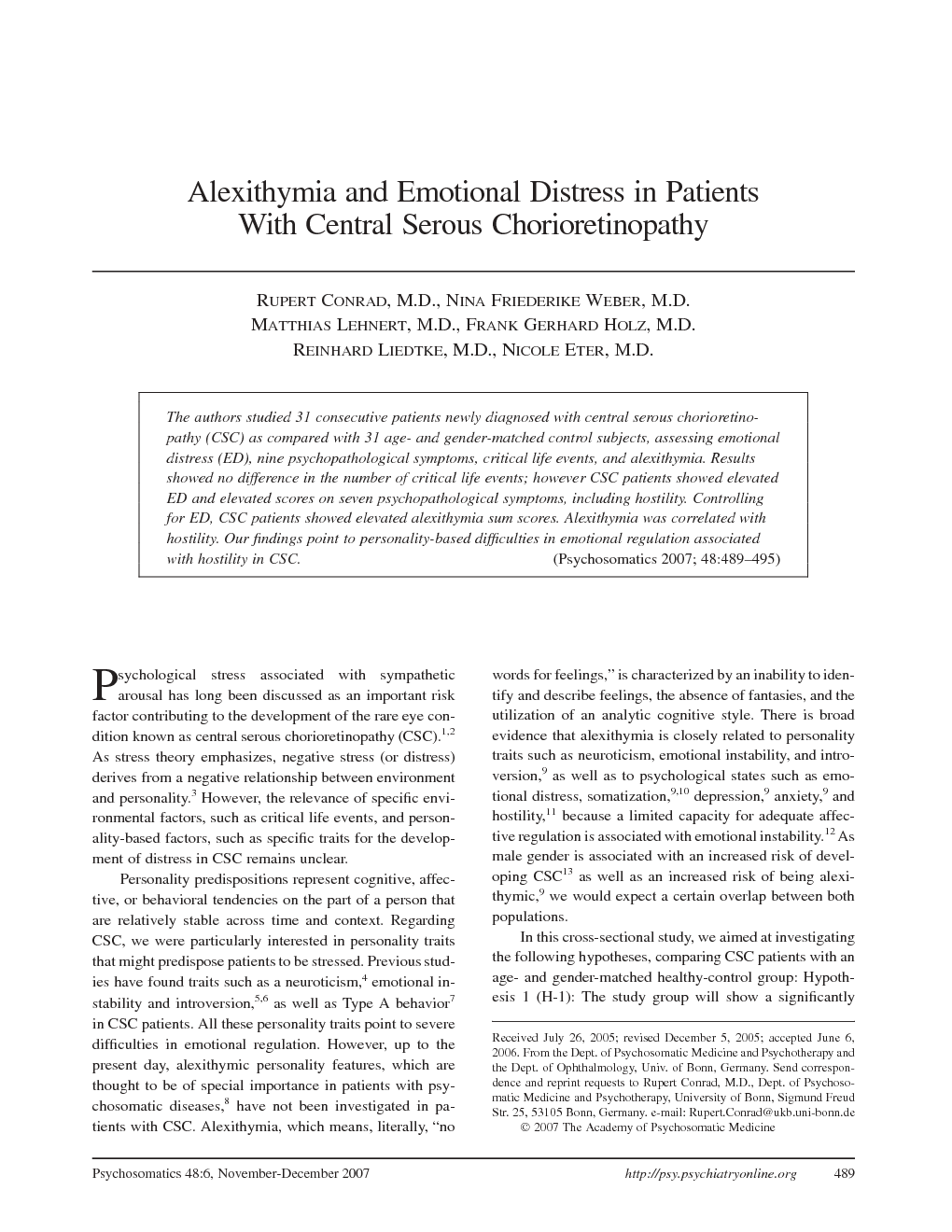 Psychological stress associated with sympathetic arousal has long been discussed as an important risk factor contributing to the development of the rare eye condition known as central serous chorioretinopathy (CSC).1,2 As stress theory emphasizes, negative stress (or distress) derives from a negative relationship between environment and personality.3 However, the relevance of specific environmental factors, such as critical life events, and personality-based factors, such as specific traits for the development of distress in CSC remains unclear. Personality predispositions represent cognitive, affective, or behavioral tendencies on the part of a person that are relatively stable across time and context. Regarding CSC, we were particularly interested in personality traits that might predispose patients to be stressed. Previous studies have found traits such as a neuroticism,4 emotional instability and introversion,5,6 as well as Type A behavior7 in CSC patients. All these personality traits point to severe difficulties in emotional regulation. However, up to the present day, alexithymic personality features, which are thought to be of special importance in patients with psychosomatic diseases,8 have not been investigated in patients with CSC. Alexithymia, which means, literally, “no words for feelings,” is characterized by an inability to identify and describe feelings, the absence of fantasies, and the utilization of an analytic cognitive style. There is broad evidence that alexithymia is closely related to personality traits such as neuroticism, emotional instability, and introversion,9 as well as to psychological states such as emotional distress, somatization,9,10 depression,9 anxiety,9 and hostility,11 because a limited capacity for adequate affective regulation is associated with emotional instability.12 As male gender is associated with an increased risk of developing CSC13 as well as an increased risk of being alexithymic,9 we would expect a certain overlap between both populations. In this cross-sectional study, we aimed at investigating the following hypotheses, comparing CSC patients with an age- and gender-matched healthy-control group: Hypothesis 1 (H-1): The study group will show a significantly higher degree of emotional distress, as measured by the Symptom Checklist–90-R. H-2: In the course of 1 year preceding the onset of symptoms of CSC, the study group will show significantly more critical life events (CLE), as measured by the Munich, Germany, Event List. H-3: The study group will show a significantly higher degree of alexithymia, as measured by the TAS–20 sum score. H-4: In the study group, alexithymia, as measured by the TAS–20 sum score will be significantly related to general emotional distress, as well as to somatization (H-5), depression (H-6), anxiety (H-7), and hostility (H-8), as measured by the SCL-90–R. Method