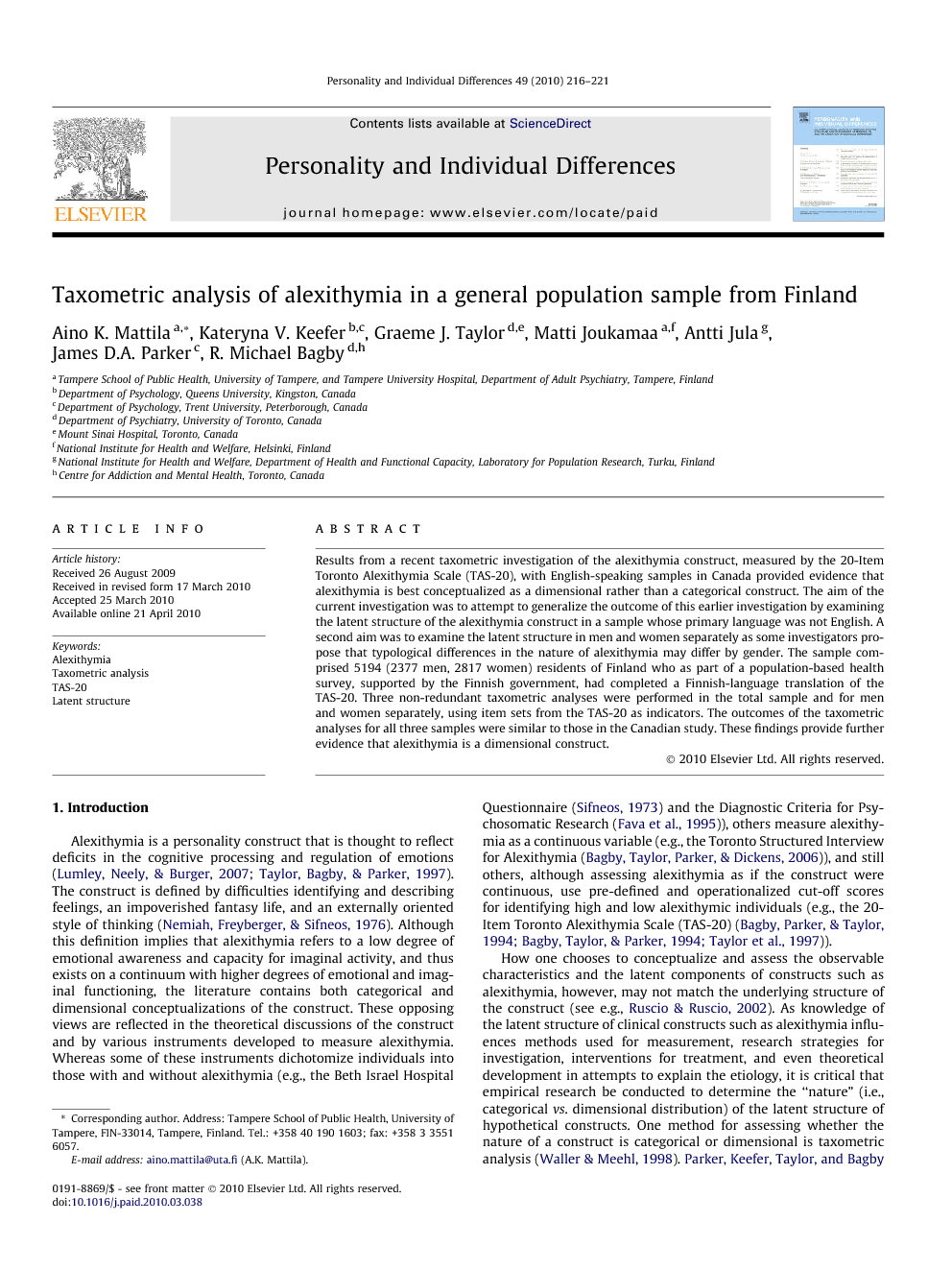 Results from a recent taxometric investigation of the alexithymia construct, measured by the 20-Item Toronto Alexithymia Scale (TAS-20), with English-speaking samples in Canada provided evidence that alexithymia is best conceptualized as a dimensional rather than a categorical construct. The aim of the current investigation was to attempt to generalize the outcome of this earlier investigation by examining the latent structure of the alexithymia construct in a sample whose primary language was not English. A second aim was to examine the latent structure in men and women separately as some investigators propose that typological differences in the nature of alexithymia may differ by gender. The sample comprised 5194 (2377 men, 2817 women) residents of Finland who as part of a population-based health survey, supported by the Finnish government, had completed a Finnish-language translation of the TAS-20. Three non-redundant taxometric analyses were performed in the total sample and for men and women separately, using item sets from the TAS-20 as indicators. The outcomes of the taxometric analyses for all three samples were similar to those in the Canadian study. These findings provide further evidence that alexithymia is a dimensional construct.

Alexithymia is a personality construct that is thought to reflect deficits in the cognitive processing and regulation of emotions (Lumley et al., 2007 and Taylor et al., 1997). The construct is defined by difficulties identifying and describing feelings, an impoverished fantasy life, and an externally oriented style of thinking (Nemiah, Freyberger, & Sifneos, 1976). Although this definition implies that alexithymia refers to a low degree of emotional awareness and capacity for imaginal activity, and thus exists on a continuum with higher degrees of emotional and imaginal functioning, the literature contains both categorical and dimensional conceptualizations of the construct. These opposing views are reflected in the theoretical discussions of the construct and by various instruments developed to measure alexithymia. Whereas some of these instruments dichotomize individuals into those with and without alexithymia (e.g., the Beth Israel Hospital Questionnaire (Sifneos, 1973) and the Diagnostic Criteria for Psychosomatic Research (Fava et al., 1995)), others measure alexithymia as a continuous variable (e.g., the Toronto Structured Interview for Alexithymia (Bagby, Taylor, Parker, & Dickens, 2006)), and still others, although assessing alexithymia as if the construct were continuous, use pre-defined and operationalized cut-off scores for identifying high and low alexithymic individuals (e.g., the 20-Item Toronto Alexithymia Scale (TAS-20) (Bagby et al., 1994, Bagby et al., 1994 and Taylor et al., 1997)). How one chooses to conceptualize and assess the observable characteristics and the latent components of constructs such as alexithymia, however, may not match the underlying structure of the construct (see e.g., Ruscio & Ruscio, 2002). As knowledge of the latent structure of clinical constructs such as alexithymia influences methods used for measurement, research strategies for investigation, interventions for treatment, and even theoretical development in attempts to explain the etiology, it is critical that empirical research be conducted to determine the “nature” (i.e., categorical vs. dimensional distribution) of the latent structure of hypothetical constructs. One method for assessing whether the nature of a construct is categorical or dimensional is taxometric analysis ( Waller & Meehl, 1998). Parker, Keefer, Taylor, and Bagby (2008) recently applied various taxometric procedures to an English-speaking community, university student, and psychiatric outpatient samples in Canada, using the three factors (subscales) of the TAS-20 as indicators. Results from this investigation provided evidence that alexithymia is best conceptualized as a dimensional construct. It might be argued that the outcomes from the Parker et al. (2008) study are “sample-dependent”. The distribution of the indicators from which a dimensional structure was inferred, for example, was derived from an English language-version of the TAS-20, and the results may not be generalizable to non-English-speaking samples. Evaluating the dimensional nature of the alexithymia construct across different language groups is critical as some question the universality of the construct (Kirmayer, 1987). A similar argument might be made with respect to gender as others have reported that men and women score differently on measures of the alexithymia construct (e.g., Franz et al., 2007 and Salminen et al., 1999). Moreover, it has been suggested that alexithymia may present itself in qualitatively different ways for men and women (Moorman et al., 2008), opening the possibility that the dimensional findings reported by Parker et al. (2008), who combined men and women into single samples, might have masked typological distinctions between the genders. It is within the context of these limitations that the current investigation was conducted. More specifically, the aim was to determine if a dimensional structure could be recovered in a single (total) sample of Finnish-speaking persons and in separate samples of men and women. The study was conducted with a large community sample in Finland, in which the participants had completed a validated Finnish-language version of the TAS-20 (Joukamaa et al., 2001).