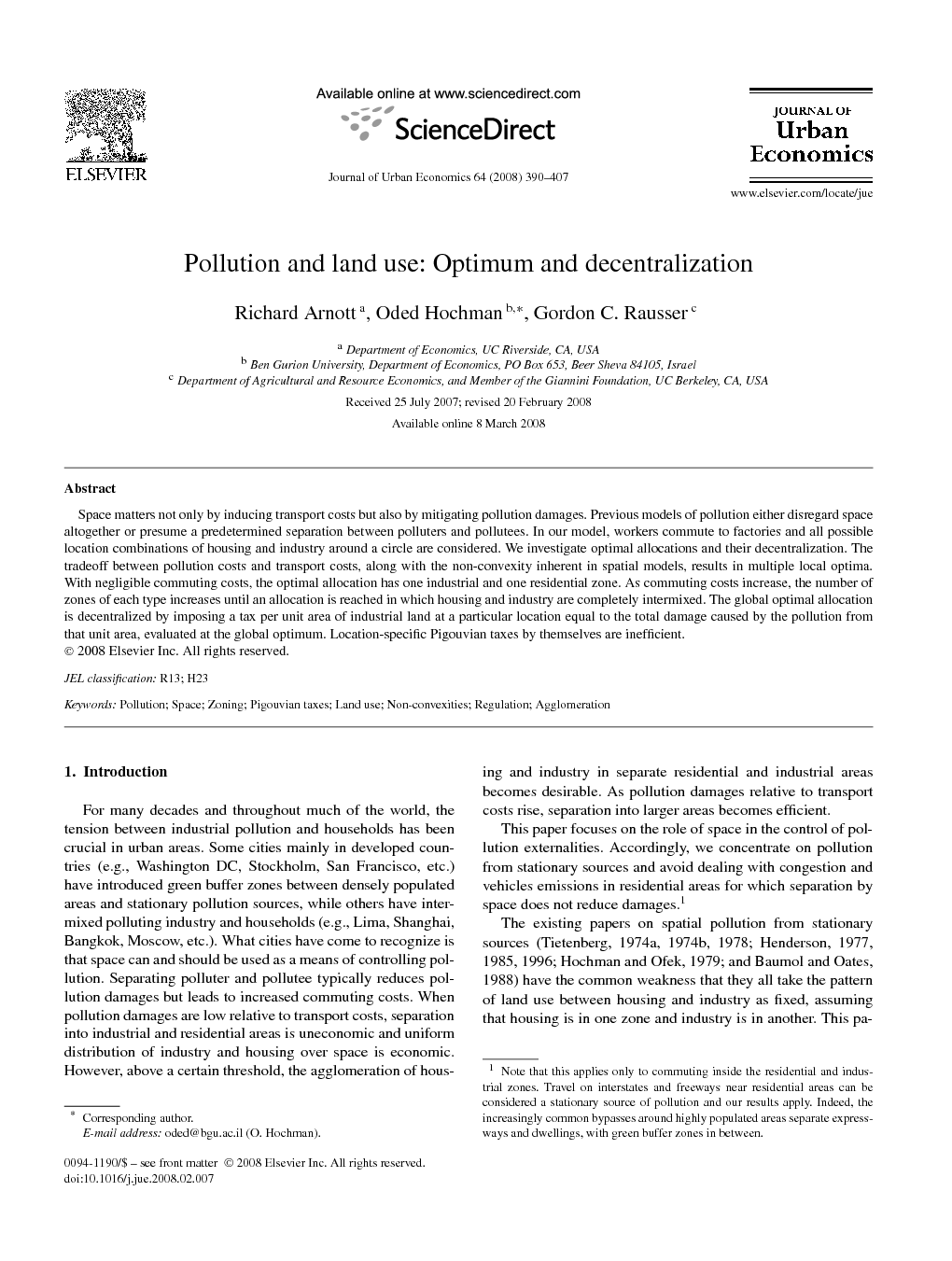 Space matters not only by inducing transport costs but also by mitigating pollution damages. Previous models of pollution either disregard space altogether or presume a predetermined separation between polluters and pollutees. In our model, workers commute to factories and all possible location combinations of housing and industry around a circle are considered. We investigate optimal allocations and their decentralization. The tradeoff between pollution costs and transport costs, along with the non-convexity inherent in spatial models, results in multiple local optima. With negligible commuting costs, the optimal allocation has one industrial and one residential zone. As commuting costs increase, the number of zones of each type increases until an allocation is reached in which housing and industry are completely intermixed. The global optimal allocation is decentralized by imposing a tax per unit area of industrial land at a particular location equal to the total damage caused by the pollution from that unit area, evaluated at the global optimum. Location-specific Pigouvian taxes by themselves are inefficient.

For many decades and throughout much of the world, the tension between industrial pollution and households has been crucial in urban areas. Some cities mainly in developed countries (e.g., Washington DC, Stockholm, San Francisco, etc.) have introduced green buffer zones between densely populated areas and stationary pollution sources, while others have intermixed polluting industry and households (e.g., Lima, Shanghai, Bangkok, Moscow, etc.). What cities have come to recognize is that space can and should be used as a means of controlling pollution. Separating polluter and pollutee typically reduces pollution damages but leads to increased commuting costs. When pollution damages are low relative to transport costs, separation into industrial and residential areas is uneconomic and uniform distribution of industry and housing over space is economic. However, above a certain threshold, the agglomeration of housing and industry in separate residential and industrial areas becomes desirable. As pollution damages relative to transport costs rise, separation into larger areas becomes efficient. This paper focuses on the role of space in the control of pollution externalities. Accordingly, we concentrate on pollution from stationary sources and avoid dealing with congestion and vehicles emissions in residential areas for which separation by space does not reduce damages.1 The existing papers on spatial pollution from stationary sources (Tietenberg, 1974a, 1974b, 1978; Henderson, 1977, 1985, 1996; Hochman and Ofek, 1979; and Baumol and Oates, 1988) have the common weakness that they all take the pattern of land use between housing and industry as fixed, assuming that housing is in one zone and industry is in another.

This paper characterized the social optimum in a spatial economy with pollution, and its decentralization. Its main innovation over previous literature is that land use is completely endogenous. The model is of a ring-shaped economy with residential and industrial land use. Employing a constant-returnsto- scale technology, firms use land and labor to produce a composite good, with emissions as an undesirable by-product. Households supply fixed labor to firms, to which they commute, derive utility from housing and the composite good, and suffer disutility from the concentration of pollution at their place of residence. The optimal land use pattern is then determined by the tradeoff between pollution and commuting costs. At one extreme, when transport costs are high, firms and households are completely intermixed; commuting costs are eliminated but pollution concentration at residential locations is high. At the other extreme, when pollution is highly noxious, households crowd together at one end of the ring and firms at the other end, with buffer zones in between; commuting costs are high but pollution concentrations at residential locations low. Between these two extremes is a wide range of possibly optimal land use patterns—different numbers of pairs of residential and industrial zones, perhaps with buffer zones. Our specification of the mapping from the spatial distribution of pollution emissions to the spatial distribution of pollution concentrations is more general than previous specifications in the literature, though still not completely general. Under our specification, the global optimum can be decentralized with a spatially differentiated tax per unit of industrial land set equal to the additional damages caused by the total emissions from the unit of land, evaluated at the social optimum. A spatially differentiated Pigouvian tax—a tax on emissions—will not decentralize the optimum.