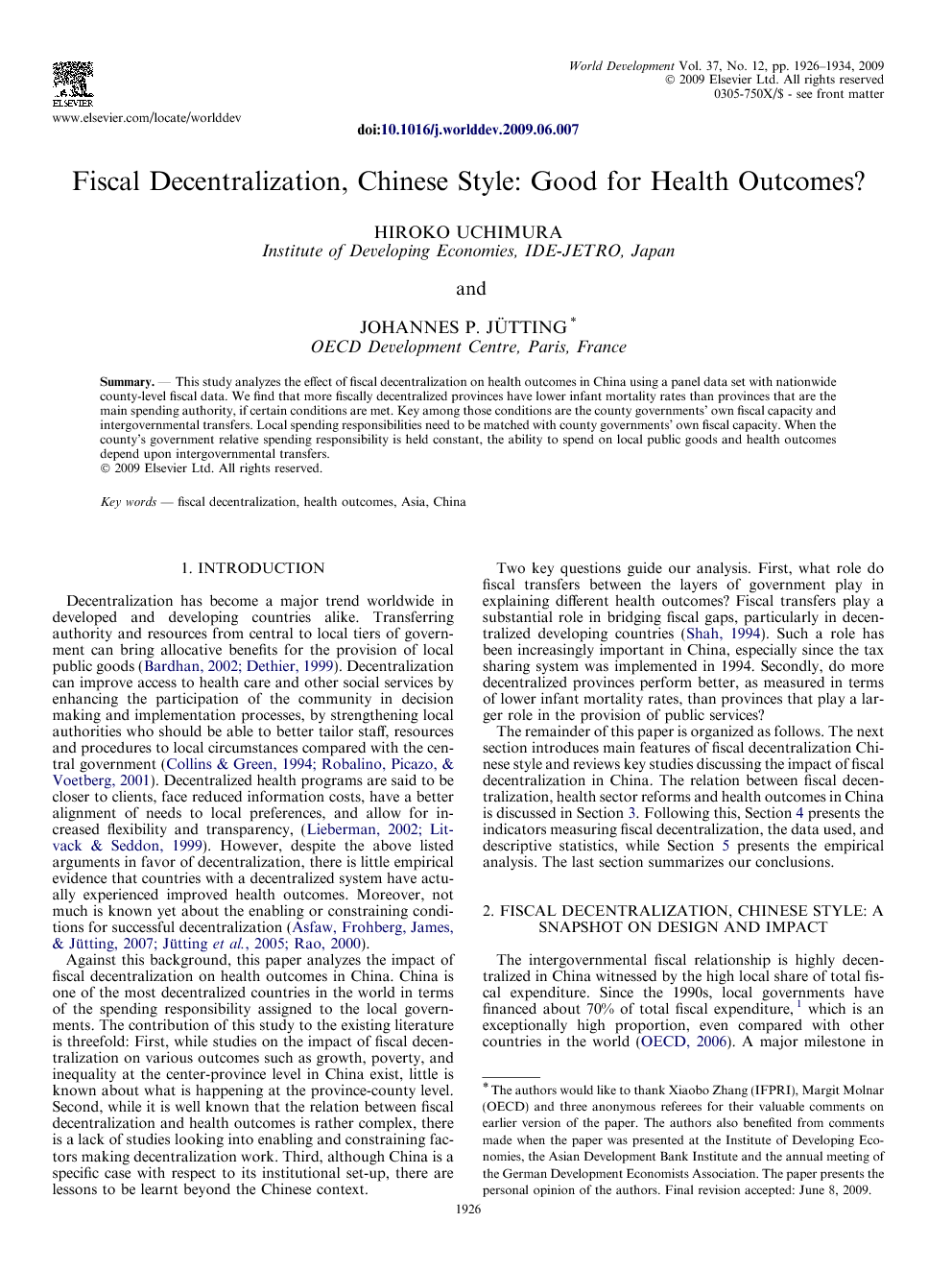 This study analyzes the effect of fiscal decentralization on health outcomes in China using a panel data set with nationwide county-level fiscal data. We find that more fiscally decentralized provinces have lower infant mortality rates than provinces that are the main spending authority, if certain conditions are met. Key among those conditions are the county governments’ own fiscal capacity and intergovernmental transfers. Local spending responsibilities need to be matched with county governments’ own fiscal capacity. When the county’s government relative spending responsibility is held constant, the ability to spend on local public goods and health outcomes depend upon intergovernmental transfers.

Decentralization has become a major trend worldwide in developed and developing countries alike. Transferring authority and resources from central to local tiers of government can bring allocative benefits for the provision of local public goods (Bardhan et al., 2002 and Dethier, 1999). Decentralization can improve access to health care and other social services by enhancing the participation of the community in decision making and implementation processes, by strengthening local authorities who should be able to better tailor staff, resources and procedures to local circumstances compared with the central government (Robalino et al., 2565 and Collins and Green, 1994). Decentralized health programs are said to be closer to clients, face reduced information costs, have a better alignment of needs to local preferences, and allow for increased flexibility and transparency, (Lieberman, 2002 and Litvack, 1999). However, despite the above listed arguments in favor of decentralization, there is little empirical evidence that countries with a decentralized system have actually experienced improved health outcomes. Moreover, not much is known yet about the enabling or constraining conditions for successful decentralization (Asfaw et al., 2007, Jütting et al., 2005 and Rao, 2000). Against this background, this paper analyzes the impact of fiscal decentralization on health outcomes in China. China is one of the most decentralized countries in the world in terms of the spending responsibility assigned to the local governments. The contribution of this study to the existing literature is threefold: First, while studies on the impact of fiscal decentralization on various outcomes such as growth, poverty, and inequality at the center-province level in China exist, little is known about what is happening at the province-county level. Second, while it is well known that the relation between fiscal decentralization and health outcomes is rather complex, there is a lack of studies looking into enabling and constraining factors making decentralization work. Third, although China is a specific case with respect to its institutional set-up, there are lessons to be learnt beyond the Chinese context.

Decentralization is often advocated as a powerful mean improving the efficiency and equity in the provision of public goods such as health care. Bringing policy makers closer to the people, enhancing participation and making the local administration accountable for service provision, are the main vehicles for this to happen, it is argued. The main results of this study leads to the conclusion to be very cautious about advocating decentralization as a “magic bullet” for improving local public goods provision; it very much depends on the design and context. In the case of fiscal decentralization in China we find intergovernmental transfers to counties and their fiscal autonomy as crucial for achieving the desired impact. Due to data limitations, this paper could not go further into the issue what kinds of transfer (conditional or unconditional) are most useful and how they should be designed. This is one important question for further analysis. Generally, the results of the study confirm findings in other countries that fiscal decentralization can indeed help to reduce infant mortality rates, if certain conditions are met. For future work, it would be useful to analyze in other country setting the determinants that are crucial for achieving pro-poor decentralization in the health sector and allowing drawing lessons beyond the country context.