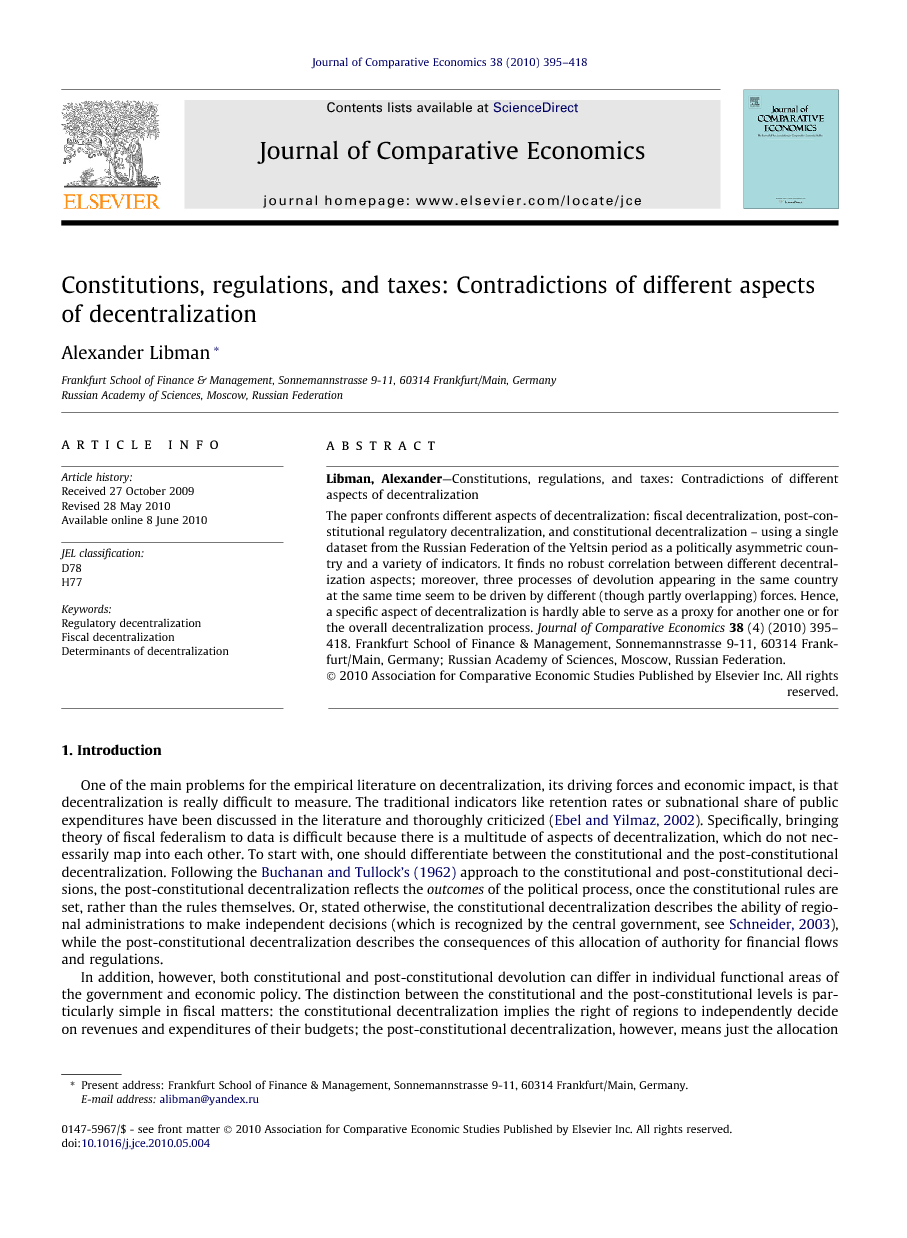 Decentralization encompasses multiple aspects with partly sophisticated connection to each other. This paper tried to look at both interrelation of different aspects of decentralization and the factors of the endogenous devolution using the example of the Russian Federation. In an asymmetric setting with weak rule of law and public hierarchy different forms of devolution became subject to bargaining between the federal government and the regions. However, identical agents seem to generate very different outcomes for different components of the decentralization process. In particular, I looked at the decentralization at the rules level, i.e. allocation of authorities set by regional constitutions, as well as at the decentralization at the outcomes level, i.e. split of tax revenue and the regulation authority. Indeed, constitutional and both post-constitutional level forms of decentralization are not robustly correlated to each other, with the only exception of regulatory decentralization and decentralization in regional constitutions (where, however, the correlation appears because of a small group of regions). The results depend upon the set of controls and the set of regions excluded from the analysis. It is important to notice, that the paper does not attempt to reveal a “true” or “correct” measure of decentralization: all three dimensions may be relevant depending upon the particular policy and research question – one should just carefully identify what one is looking for. Moreover, different aspects of decentralization are driven by different sets of factors. The only two robust factors influencing several dimensions of decentralization are distance from Moscow (a measure of bargaining power: relevant for fiscal and regulatory decentralization) and dummy republic (bargaining rules and/or path dependence: relevant for regulatory and constitutional decentralization). However, even for these variables the impact depends on how regulatory, fiscal or constitutional decentralization is measured. Dummy republic fits the predictions for the Russian federalism, the importance of distance from Moscow is less expected. In addition, for different dimensions of the fiscal decentralization I find an important role of territory (bargaining power), industrial concentration (lobbying) and fiscal flows (fiscal transfers and tax revenue – in this case some of the results seem to be driven by the endogeneity). It is interesting to notice that the sign of the fiscal flows variables is often contradicting the theory, while the signs of other variables are usually theory-consistent. Urbanization often turns out to be significant in the fiscal and constitutional decentralization regressions, but is not robust to specification and partly changes sign. For the power-sharing treaties I find a strong and robust impact of the declarations of regional elites, suggesting that this dimension of decentralization was of a rather “symbolic” nature. Autonomy incorporated in regional constitutions increases for regions with large population (i.e. strong bargaining power). There are a number of limitations for the study from the point of view of the generalization of results. First, all indicators have limited ability to measure the underlying decentralization concepts. Second, the contradiction between unilateral and bilateral devolution and formally highly symmetric design of the Russian federalism may influence the results. Third, I am considering a relatively short time period in an unstable institutional, economic and political environment. For example, the data includes the period of economic crisis in 1998, which had a profound impact on the behavior of all bargaining parties. Finally, this paper has only limited ability to resolve the endogeneity problem (as usually); hence, the results should be treated rather like correlations than causal links. Nevertheless, it still provides additional evidence in favor of the suspicion that different aspects of decentralization are really different from each other in terms of determinants and outcomes, what may be quite important for the empirical studies of the factors and impact of decentralization.