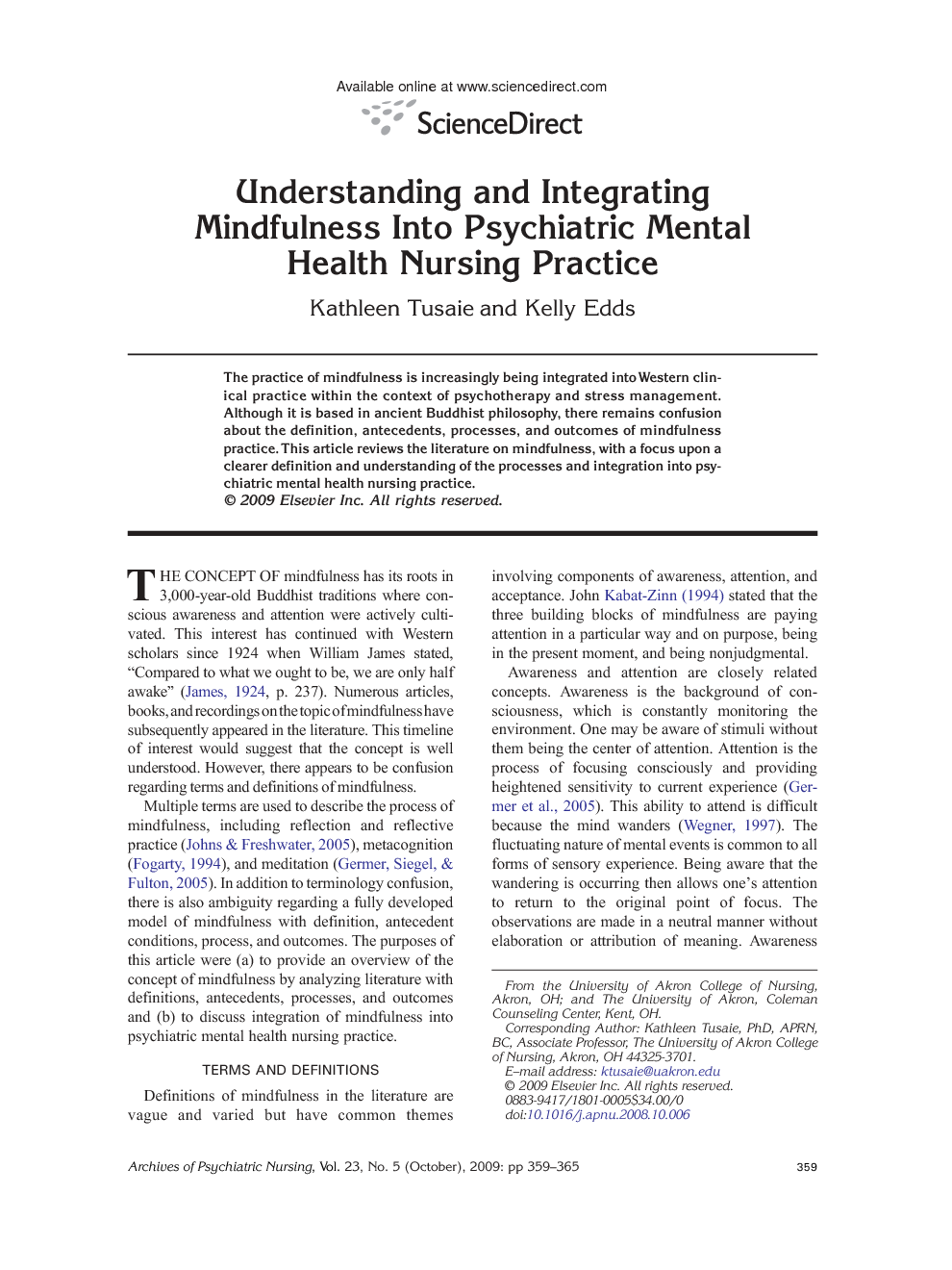 The practice of mindfulness is increasingly being integrated into Western clinical practice within the context of psychotherapy and stress management. Although it is based in ancient Buddhist philosophy, there remains confusion about the definition, antecedents, processes, and outcomes of mindfulness practice. This article reviews the literature on mindfulness, with a focus upon a clearer definition and understanding of the processes and integration into psychiatric mental health nursing practice. THE CONCEPT OF mindfulness has its roots in 3,000-year-old Buddhist traditions where conscious awareness and attention were actively cultivated. This interest has continued with Western scholars since 1924 when William James stated, “Compared to what we ought to be, we are only half awake” (James, 1924, p. 237). Numerous articles, books, and recordings on the topic of mindfulness have subsequently appeared in the literature. This timeline of interest would suggest that the concept is well understood. However, there appears to be confusion regarding terms and definitions of mindfulness. Multiple terms are used to describe the process of mindfulness, including reflection and reflective practice (Johns & Freshwater, 2005), metacognition (Fogarty, 1994), and meditation (Germer, Siegel, & Fulton, 2005). In addition to terminology confusion, there is also ambiguity regarding a fully developed model of mindfulness with definition, antecedent conditions, process, and outcomes. The purposes of this article were (a) to provide an overview of the concept of mindfulness by analyzing literature with definitions, antecedents, processes, and outcomes and (b) to discuss integration of mindfulness into psychiatric mental health nursing practice.

Definitions of mindfulness in the literature are vague and varied but have common themes involving components of awareness, attention, and acceptance. John Kabat-Zinn (1994) stated that the three building blocks of mindfulness are paying attention in a particular way and on purpose, being in the present moment, and being nonjudgmental. Awareness and attention are closely related concepts. Awareness is the background of consciousness, which is constantly monitoring the environment. One may be aware of stimuli without them being the center of attention. Attention is the process of focusing consciously and providing heightened sensitivity to current experience (Germer et al., 2005). This ability to attend is difficult because the mind wanders (Wegner, 1997). The fluctuating nature of mental events is common to all forms of sensory experience. Being aware that the wandering is occurring then allows one's attention to return to the original point of focus. The observations are made in a neutral manner without elaboration or attribution of meaning. Awareness during mindfulness has further been described as open or receptive awareness, being with observations, bare attention, and choiceless awareness (Deikman, 1982 and Kabot Zinn, 1982). Although mindfulness has both state and trait characteristics, it has also been described as a set of skills that can be developed with practice (Bishop et al., 2004 and Linehan, 1993). Therefore, individuals vary not only in their willingness to be aware and sustain attention, but this capacity can also be sharpened or dulled by a variety of factors (Brown & Ryan, 2003). Although multiple terms are used in the literature to describe mindfulness, they are not interchangeable. Similarities and differences between mindfulness and meditation, reflection, and metacognition will be discussed. Openness or nonjudgmental acceptance, which is a building block of mindfulness, can also include a meditation component. However, mindfulness is not meditation. Meditation is to reflect and contemplate or empty the mind to concentrate on a single object (Massion, Herbert, Weheimer, & Kabat-Zinn, 1995). Mindfulness benefits from the ability to concentrate. However, in mindfulness, there is a focus on awareness of objects as they appear in the mind. Concentration only allows for the attention to one object, where mindfulness is the awareness of changing elements of thought. When used together, mindfulness meditation allows for awareness of thoughts while being able to concentrate on a particular object (Germer et al., 2005 and Williams et al., 2007). Reflection involves examining one's responses, beliefs, and assumptions after an unusual or perplexing experience (Loughran, 1996). There is usually a problem-solving process involving a solution with a decision to act (Lowe & Kerr, 1998). Similar to mindfulness, reflection involves self-awareness but does not involve attention to the present moment and being nonjudgmental. Therefore, reflection and mindfulness are similar concepts because they both involve self-awareness but are very different when analyzing process and timing. Metacognition is thinking about thoughts (Bishop et al., 2004). It is the process of monitoring thoughts which are then recognized to be transient events rather than true representations of reality. Therefore, metacognition is a component of mindfulness, but it does not include the additional components of being in the moment and nonjudgmental. Metacognition describes one component of mindfulness, but it is not mindfulness. In summary, this brief analysis of terms and definitions of mindfulness is not exhaustive but may assist with clarification of mindfulness as a multifaceted concept.