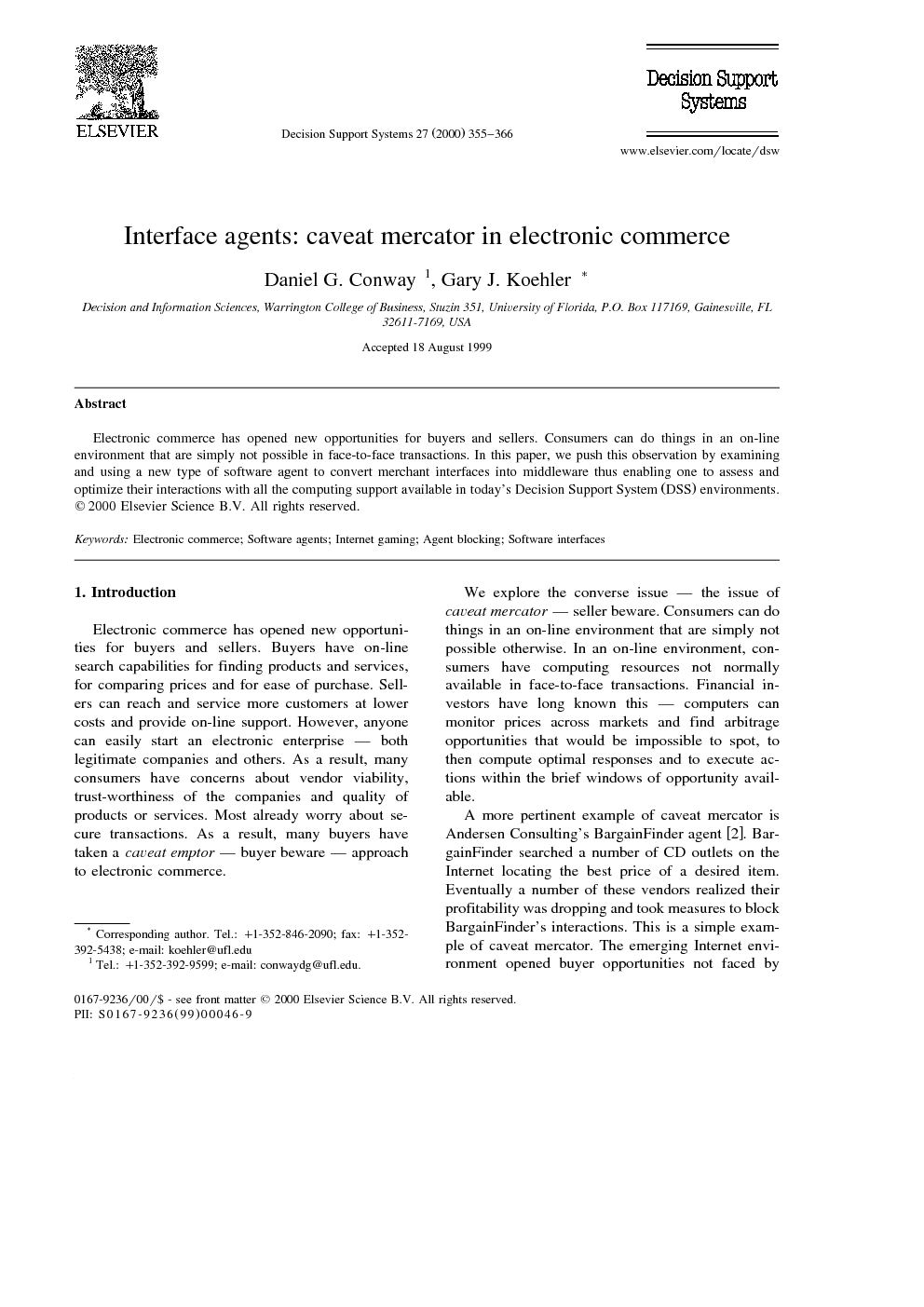 Electronic commerce has opened new opportunities for buyers and sellers. Consumers can do things in an on-line environment that are simply not possible in face-to-face transactions. In this paper, we push this observation by examining and using a new type of software agent to convert merchant interfaces into middleware thus enabling one to assess and optimize their interactions with all the computing support available in today's Decision Support System (DSS) environments.

Electronic commerce has opened new opportunities for buyers and sellers. Buyers have on-line search capabilities for finding products and services, for comparing prices and for ease of purchase. Sellers can reach and service more customers at lower costs and provide on-line support. However, anyone can easily start an electronic enterprise — both legitimate companies and others. As a result, many consumers have concerns about vendor viability, trust-worthiness of the companies and quality of products or services. Most already worry about secure transactions. As a result, many buyers have taken a caveat emptor — buyer beware — approach to electronic commerce. We explore the converse issue — the issue of caveat mercator — seller beware. Consumers can do things in an on-line environment that are simply not possible otherwise. In an on-line environment, consumers have computing resources not normally available in face-to-face transactions. Financial investors have long known this — computers can monitor prices across markets and find arbitrage opportunities that would be impossible to spot, to then compute optimal responses and to execute actions within the brief windows of opportunity available. A more pertinent example of caveat mercator is Andersen Consulting's BargainFinder agent [2]. BargainFinder searched a number of CD outlets on the Internet locating the best price of a desired item. Eventually a number of these vendors realized their profitability was dropping and took measures to block BargainFinder's interactions. This is a simple example of caveat mercator. The emerging Internet environment opened buyer opportunities not faced by real-world merchants. These opportunities resulted from inexpensive searching and comparison capabilities. Although BargainFinder illustrates a caveat mercator situation, we wish to explore a more complex setting where computing and decision making resources are also employed. These tools enable an agent to discover hard-to-see opportunities — or opportunities never exploited when the tools could not be used or not used effectively. These may not be anticipated by merchants nor easily thwarted. BargainFinder was blocked by merchants who stood to lose. This blocking was easy since BargainFinder worked from a central site. Jango [16] circumvented this by working from user sites. Typically software agents are long-lived, semi-autonomous, proactive, and adaptive. An ideal consumer agent would interact with a merchant's agent to find goods, negotiate price, etc. These agents would have to learn and adapt to changing conditions while still striving towards the overall goals of their owner (see Ref. [14] for a good survey of agent usage in electronic commerce). Unfortunately, most on-line consumer-merchant interactions still require direct manipulation of an interface. We take this as a given and propose a software agent that knows how to interact with interfaces. This reduces any merchant application to middleware that can be manipulated in the same manner a human would manipulate it. More importantly, our agent can be endowed with Decision Support System (DSS) and AI capabilities in ways never anticipated by merchants. This research proposes a software agent that works directly through a merchant's web-site interface. This agent treats an e-commerce site as middleware and responds with mouse clicks, typed text, etc. just as a human might. We call this an interface agent. This behavior hides the software agent's activities making it appear as if a human was dealing with the application. However, the software agent can easily bring to bear sophisticated information processing and decision-making tools. We propose that our interface agent can exploit opportunities not present in face-to-face transactions. To test this hypothesis, we developed a prototype and used it in hundreds of thousands of transactions to exploit an opportunity not practical in similar, direct human interactions. Indeed, the very number of transactions undertaken would not have been possible by direct human interactions.This study shows that an interface agent can seriously compromise a merchant's business. Furthermore, we explore measures merchants might take to protect themselves. However, none of our proposals is fool proof. Our results indicate that caveat mercator is a serious consideration. Companies should understand this threat before launching an e-commerce business. This paper brings to light both new DSS opportunities (made possible by an interface agent) and exposes the need for businesses to understand and counter this IT-based threat.In Section 2we briefly review agent literature and propose our interface agent. In Section 3we discuss our test environment, give relevant background information and describe our specific implementation. We tested this model in a real-world setting. Following a long tradition in Artificial Intelligence research, we focused on a gaming environment. The setting we chose to study was Internet Gaming. Besides being fun, it presented an environment that exhibited all the attributes we sought. In Section 4we show the results of the usage of our software agent. Section 5presents methods that merchants can use to block traditional unwanted agents. It is important to understand these tactics to see what advantages an interface agent provides. Surprisingly, these and many common security methods are impotent against interface agents. We present some possible steps merchants might employ against interface agents. Finally, in Section 6we present our conclusion and directions for future research.

This research successfully demonstrated a new type of software agent which converts merchant interfaces into middleware, thus enabling one to assess and optimize their interactions with all the computing support available in today's DSS environments. One area of future research is the need for describing and developing tools to automate the training of the agent to interact with a new interface. All intelligent software agents either have domain knowledge loaded into the agent's knowledge base or are equipped with learning capabilities. We used a combination approach where the graphical data was first captured and interpreted by the authors. The interface agent would then perform pattern recognition searching for these pre-specified objects. Learning new interfaces should not be very difficult since most graphical user interface components are well defined and constitute a relatively small set. The interface agent's usage of a client-side merchant application is completely indistinguishable from a human agent's usage. It operates through the merchant's interface. However, an astute merchant might notice that a customer is making exceptionally good decisions. To the extent that the merchant can ban such individuals, our agent can also be targeted. However, it is relatively easy to disguise our agent's activities. Many optimal actions have little incremental value over sub-optimal actions. The agent might select sub-optimal (even naive) actions in these cases while still using optimal actions in more lucrative situations. Optimality itself is a good disguise. Indeed, we saw many situations where the optimal actions looked naive compared to normal “expert” play. For example, consider the completely contrived case where the dealer has an up card of an 8. The player has a hand totaling 19 and there are 4 cards remaining in the deck — all of them aces. Most players not tracking the deck's state would stand on a 19 vs. an 8. However, hitting the 19 results in a win (a guaranteed 20 vs. a final dealer's total of 19) where standing results in a push (a 19 vs. a 19). There is a well-known statement “pigs get fat but hogs get slaughtered.” A software agent can operate 24 h a day, 7 days a week. This is “hog” activity. However, one can run a software agent 24 h a day, 7 days a week by running a few minutes under each of a large number of different accounts (possibly on different, widely dispersed machines). We have illustrated the value of an interface agent with Internet casinos. Other areas of potential caveat mercator should be identified. Even in the Internet casino environment, other games can be played with positive expected value such as certain video poker games [10]. Many other opportunities exist. One can imagine the simultaneous arbitrage across various auction sites. At the least, new electronic commerce initiatives need to understand this possibility. Conversely, good strategies to thwart interface agents need to be discovered. Otherwise, a significant threat to electronic commerce exists, as illustrated by our research. This threat is not something most merchants understand. They have not been exposed to a real-world counterpart of this cyberspace nuance. For example, traditional casinos operated for hundreds of years before limited versions of optimal play of blackjack were discovered. It took years for casinos to evolve effective strategies to thwart savvy players knowing how to employ these methods. It is important to note that not all adverse agent activities are viewed as such. For example, many merchants found BargainFinder's activities unavoidable and sought other, more traditional, strategies to cope — like being a loss-leader making money on ancillary services, or bundling. So merchants may need to rethink their business plans and find ways to accept the new realities of commerce but still make money. As a reviewer pointed out, another situation yielding caveat mercator concern could arise from consumers interacting with each other, perhaps collusively, perhaps just learning as a group.