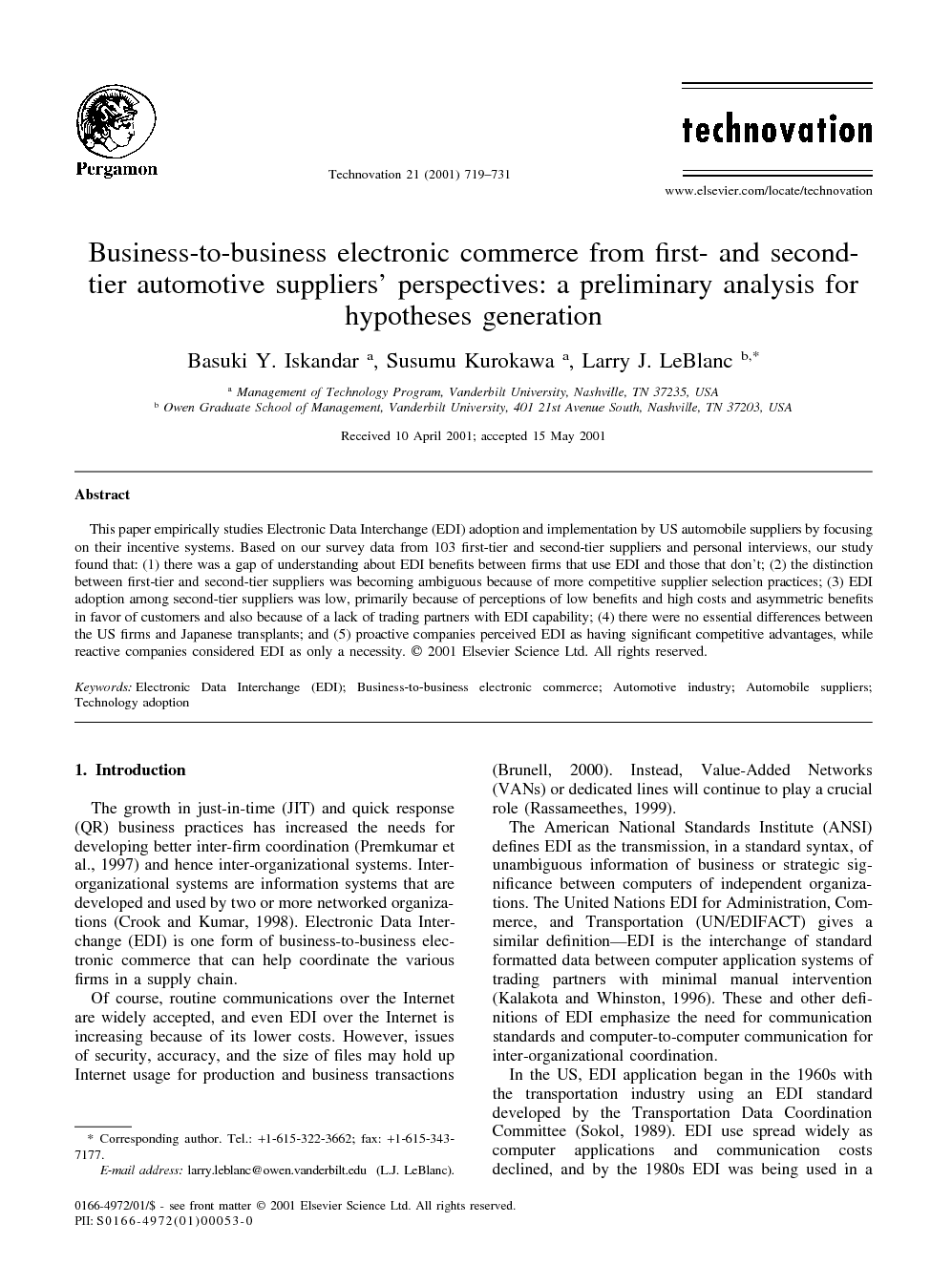 This paper empirically studies Electronic Data Interchange (EDI) adoption and implementation by US automobile suppliers by focusing on their incentive systems. Based on our survey data from 103 first-tier and second-tier suppliers and personal interviews, our study found that: (1) there was a gap of understanding about EDI benefits between firms that use EDI and those that don't; (2) the distinction between first-tier and second-tier suppliers was becoming ambiguous because of more competitive supplier selection practices; (3) EDI adoption among second-tier suppliers was low, primarily because of perceptions of low benefits and high costs and asymmetric benefits in favor of customers and also because of a lack of trading partners with EDI capability; (4) there were no essential differences between the US firms and Japanese transplants; and (5) proactive companies perceived EDI as having significant competitive advantages, while reactive companies considered EDI as only a necessity.

The growth in just-in-time (JIT) and quick response (QR) business practices has increased the needs for developing better inter-firm coordination (Premkumar et al., 1997) and hence inter-organizational systems. Inter-organizational systems are information systems that are developed and used by two or more networked organizations (Crook and Kumar, 1998). Electronic Data Interchange (EDI) is one form of business-to-business electronic commerce that can help coordinate the various firms in a supply chain. Of course, routine communications over the Internet are widely accepted, and even EDI over the Internet is increasing because of its lower costs. However, issues of security, accuracy, and the size of files may hold up Internet usage for production and business transactions (Brunell, 2000). Instead, Value-Added Networks (VANs) or dedicated lines will continue to play a crucial role (Rassameethes, 1999). The American National Standards Institute (ANSI) defines EDI as the transmission, in a standard syntax, of unambiguous information of business or strategic significance between computers of independent organizations. The United Nations EDI for Administration, Commerce, and Transportation (UN/EDIFACT) gives a similar definition—EDI is the interchange of standard formatted data between computer application systems of trading partners with minimal manual intervention (Kalakota and Whinston, 1996). These and other definitions of EDI emphasize the need for communication standards and computer-to-computer communication for inter-organizational coordination. In the US, EDI application began in the 1960s with the transportation industry using an EDI standard developed by the Transportation Data Coordination Committee (Sokol, 1989). EDI use spread widely as computer applications and communication costs declined, and by the 1980s EDI was being used in a wide range of industries, including automotive, retail, and government sectors (Zimmerman, 1996 and Kalakota and Whinston, 1996). The advantages of EDI are not only replacing paper documents with electronic equivalents, but also eliminating clerical errors from duplicate manual data entry (Arunachalam, 1997). This results in faster order processing and therefore lower lead-times between order receipt and fulfillment. The greater accuracy and reduced lead-time both contribute to lower inventory costs and more precise delivery schedules. Electronic surrogates for billing have led to improved cash flows, and fewer data-entry employees have lowered overall administration costs. Eliminating dependence on unreliable postal systems is another advantage. As with other telecommunication technologies, EDI is subject to positive network externality characteristics, i.e., its utility increases with the level of its adoption by other related firms (Brousseau, 1994). A critical number of trading partners must be realized to gain significant benefits of using EDI. Therefore, widespread EDI adoption is considered important for achieving a volume of transactions that make EDI implementation economically justified (Iacovou et al., 1995). Although EDI has been available for approximately thirty years, and its benefits are widely acclaimed, the level of EDI diffusion is considered low (Senn, 1998, Gottardi and Bolisani, 1996 and Brousseau, 1994). In the US, of the 2 million companies with more than 10 employees, only 100,000 companies have adopted EDI (Radosevich, 1997). Many practitioners complain that convincing trading partners to implement EDI is more difficult than implementing EDI in the first place (Iacovou et al., 1995). In fact, an industry joke is that most companies are so unfamiliar with EDI that they do not even know how to spell it (Kalakota and Whinston, 1996). Although EDI is becoming an intensive issue in industry, surprisingly few attempts have been made to investigate empirically the incentive systems for auto suppliers' EDI adoption. One survey was performed by the Industrial Technology Institute Center for Electronic Commerce (Morell et al., 1995). However, the focus of that survey was on small- to mid-sized firms in a variety of industrial sectors including automotive, aerospace, semiconductor, telecommunications, and defense. Arunachalam (1997) states that there has been insufficient insight into adoption and management of EDI systems, and so more empirical studies are needed to enrich the understanding about issues of EDI adoption. In this paper, we study systematically the reasons why EDI is or is not adopted by automobile suppliers in the US. Our approach is a hypothesis-generating type, rather than a hypothesis-testing type. This is because it is difficult to construct hypotheses for relatively new subjects such as EDI use by second-tier suppliers (Cook and Campbell, 1979).