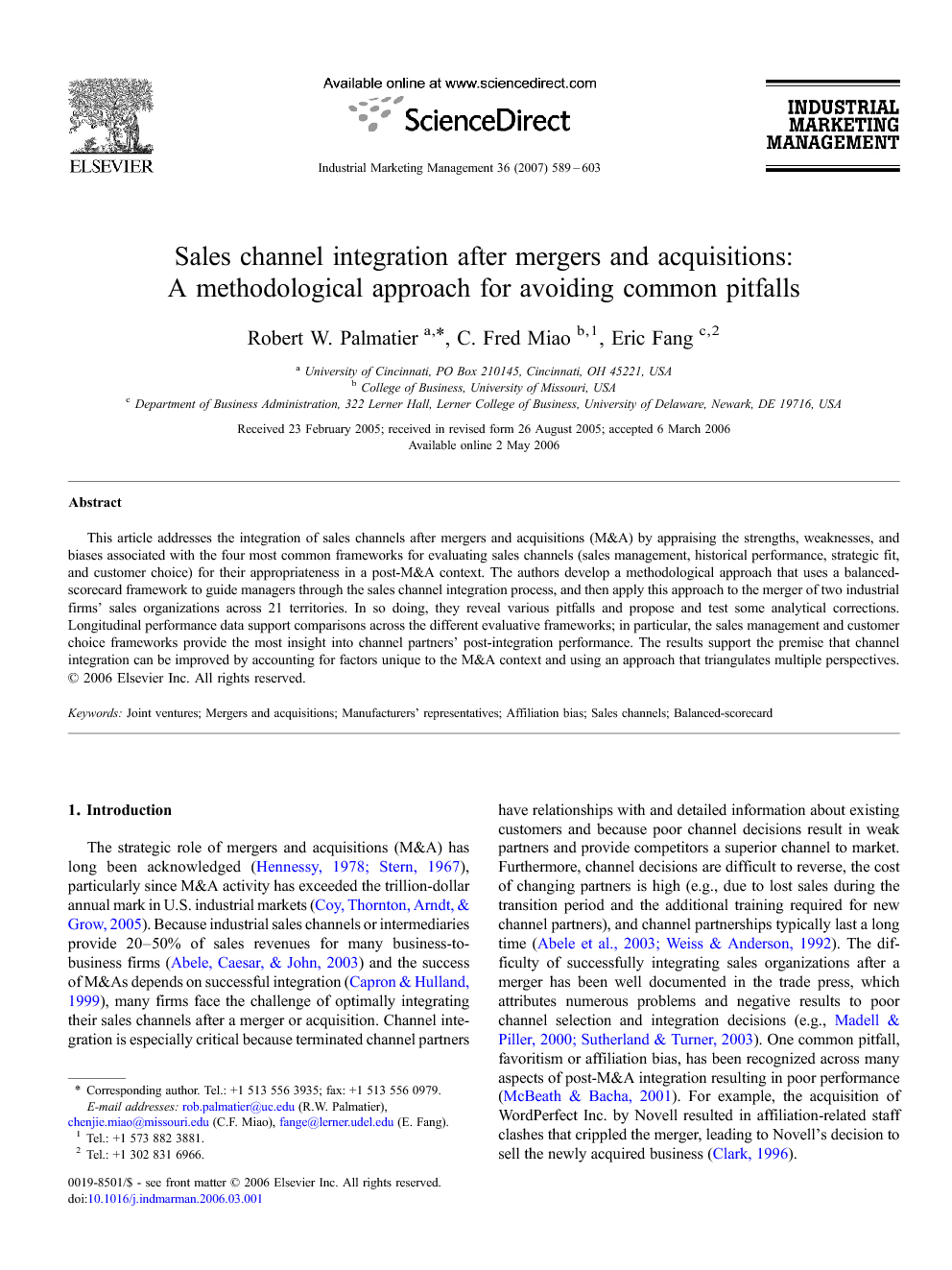 This article addresses the integration of sales channels after mergers and acquisitions (M&A) by appraising the strengths, weaknesses, and biases associated with the four most common frameworks for evaluating sales channels (sales management, historical performance, strategic fit, and customer choice) for their appropriateness in a post-M&A context. The authors develop a methodological approach that uses a balanced-scorecard framework to guide managers through the sales channel integration process, and then apply this approach to the merger of two industrial firms' sales organizations across 21 territories. In so doing, they reveal various pitfalls and propose and test some analytical corrections. Longitudinal performance data support comparisons across the different evaluative frameworks; in particular, the sales management and customer choice frameworks provide the most insight into channel partners' post-integration performance. The results support the premise that channel integration can be improved by accounting for factors unique to the M&A context and using an approach that triangulates multiple perspectives.

The strategic role of mergers and acquisitions (M&A) has long been acknowledged (Hennessy, 1978 and Stern, 1967), particularly since M&A activity has exceeded the trillion-dollar annual mark in U.S. industrial markets (Coy, Thornton, Arndt, & Grow, 2005). Because industrial sales channels or intermediaries provide 20–50% of sales revenues for many business-to-business firms (Abele, Caesar, & John, 2003) and the success of M&As depends on successful integration (Capron & Hulland, 1999), many firms face the challenge of optimally integrating their sales channels after a merger or acquisition. Channel integration is especially critical because terminated channel partners have relationships with and detailed information about existing customers and because poor channel decisions result in weak partners and provide competitors a superior channel to market. Furthermore, channel decisions are difficult to reverse, the cost of changing partners is high (e.g., due to lost sales during the transition period and the additional training required for new channel partners), and channel partnerships typically last a long time (Abele et al., 2003 and Weiss and Anderson, 1992). The difficulty of successfully integrating sales organizations after a merger has been well documented in the trade press, which attributes numerous problems and negative results to poor channel selection and integration decisions (e.g., Madell and Piller, 2000 and Sutherland and Turner, 2003). One common pitfall, favoritism or affiliation bias, has been recognized across many aspects of post-M&A integration resulting in poor performance (McBeath & Bacha, 2001). For example, the acquisition of WordPerfect Inc. by Novell resulted in affiliation-related staff clashes that crippled the merger, leading to Novell's decision to sell the newly acquired business (Clark, 1996). However, research literature provides little guidance regarding this important and increasingly prevalent business need to integrate sales organizations (Rangan, Zoltners, & Becker, 1986). Whereas it sheds some light on the best methods for selecting channel partners (Johnston and Cooper, 1981 and Weiss and Anderson, 1992), managing sales channels (Mehta et al., 2000 and Rangan et al., 1992), and handling M&A (Capron and Hulland, 1999 and Mallette et al., 2003), it provides little insight into integrating sales channels after M&A. Moreover, generalizing from these approaches to the M&A context can be troublesome due to its unique characteristics, including (1) separate sales and marketing organizations; (2) organizations that have only a partial knowledge of customers, products, and channels; (3) the tendency of premerger affiliations or bias to overwhelm other decision criteria; and (4) the need for rapid decisions in an often politically charged environment. Overall, the literature provides limited insight into a frequently confronted business decision that has long-term financial ramifications whose many problems and pitfalls the business community already recognizes. Therefore, the research objectives of this study are to develop and test a methodological approach for optimally selecting and integrating sales channels after an M&A while avoiding some common pitfalls. The proposed framework and process take a “balanced-scorecard” approach (Kaplan & Norton, 1996) and integrate four different sales channel evaluative perspectives identified in the literature. The inputs from multiple perspectives (i.e., salesforce, financial performance, business objectives, customers) in a balanced-scorecard framework support a triangulation across different aspects of the sales channels, help promote organizational learning, and may minimize the impact of some problems unique to the M&A context (e.g., Brinberg and Hirschman, 1986 and Chandy, 2003). The process outlined herein also attempts to minimize conflict among participants, which can result in reduced motivation (Covin et al., 1996 and Walsh, 1989) and protracted legal issues (Mohr et al., 1999 and Weiss and Anderson, 1992). We organize this article as follows: First, we review the applicable literature to appraise the appropriateness of existing sales channel evaluative frameworks and identify any problems or pitfalls associated with them in a post-M&A context. Second, we outline our balanced-scorecard channel selection and integration framework and process, including the modifications needed to minimize context-specific biases. Third, we test the framework and process with an analysis of an acquisition in the industrial market and subsequent sales channel integration across 21 territories that used the proposed methodology. The analyses include an evaluation of post-acquisition longitudinal performance across the different evaluative frameworks. Fourth, we present the key findings, managerial implications, limitations, and future research directions.