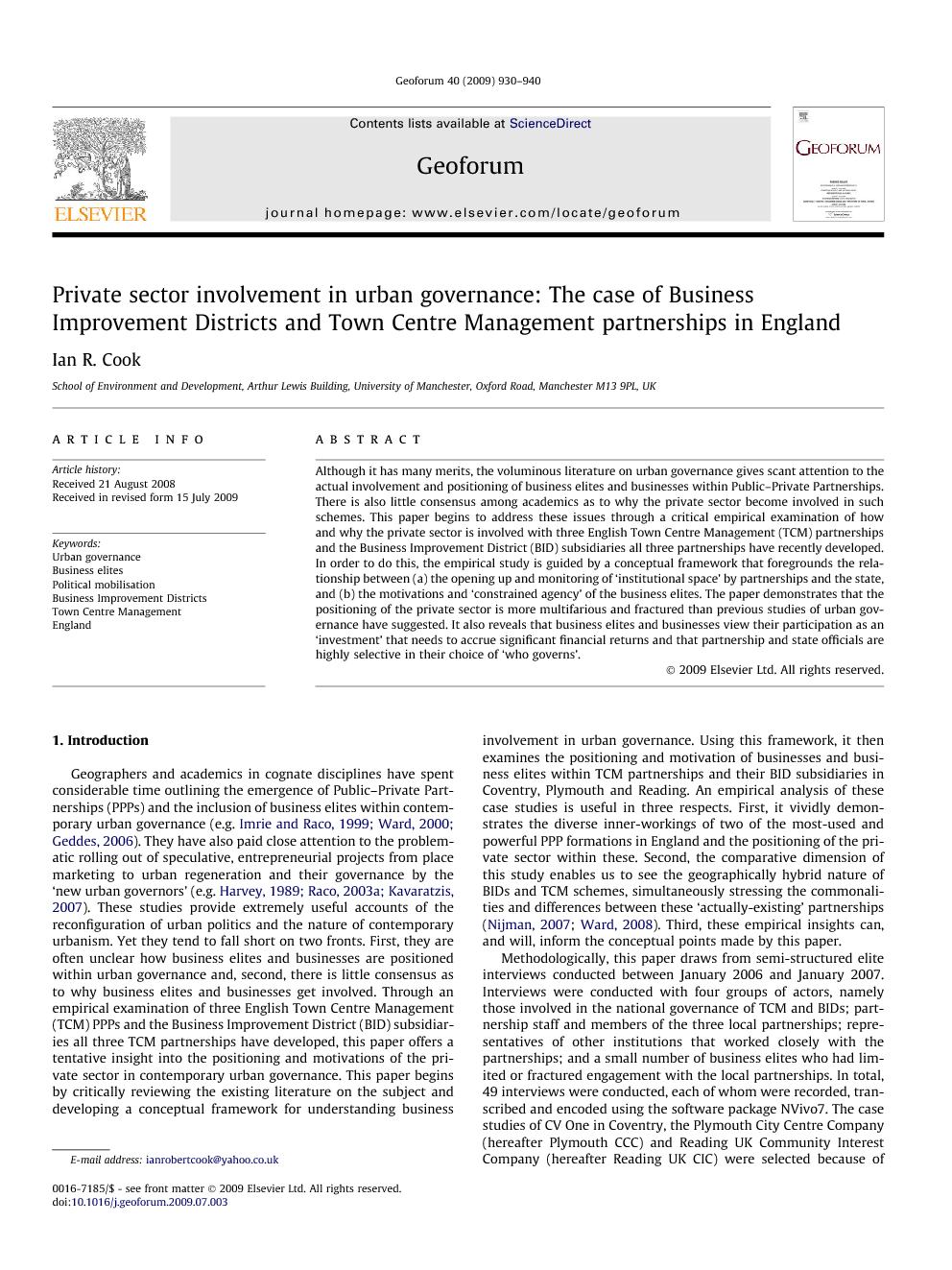 Although it has many merits, the voluminous literature on urban governance gives scant attention to the actual involvement and positioning of business elites and businesses within Public–Private Partnerships. There is also little consensus among academics as to why the private sector become involved in such schemes. This paper begins to address these issues through a critical empirical examination of how and why the private sector is involved with three English Town Centre Management (TCM) partnerships and the Business Improvement District (BID) subsidiaries all three partnerships have recently developed. In order to do this, the empirical study is guided by a conceptual framework that foregrounds the relationship between (a) the opening up and monitoring of ‘institutional space’ by partnerships and the state, and (b) the motivations and ‘constrained agency’ of the business elites. The paper demonstrates that the positioning of the private sector is more multifarious and fractured than previous studies of urban governance have suggested. It also reveals that business elites and businesses view their participation as an ‘investment’ that needs to accrue significant financial returns and that partnership and state officials are highly selective in their choice of ‘who governs’.

Geographers and academics in cognate disciplines have spent considerable time outlining the emergence of Public–Private Partnerships (PPPs) and the inclusion of business elites within contemporary urban governance (e.g. Imrie and Raco, 1999, Ward, 2000 and Geddes, 2006). They have also paid close attention to the problematic rolling out of speculative, entrepreneurial projects from place marketing to urban regeneration and their governance by the ‘new urban governors’ (e.g. Harvey, 1989, Raco, 2003a and Kavaratzis, 2007). These studies provide extremely useful accounts of the reconfiguration of urban politics and the nature of contemporary urbanism. Yet they tend to fall short on two fronts. First, they are often unclear how business elites and businesses are positioned within urban governance and, second, there is little consensus as to why business elites and businesses get involved. Through an empirical examination of three English Town Centre Management (TCM) PPPs and the Business Improvement District (BID) subsidiaries all three TCM partnerships have developed, this paper offers a tentative insight into the positioning and motivations of the private sector in contemporary urban governance. This paper begins by critically reviewing the existing literature on the subject and developing a conceptual framework for understanding business involvement in urban governance. Using this framework, it then examines the positioning and motivation of businesses and business elites within TCM partnerships and their BID subsidiaries in Coventry, Plymouth and Reading. An empirical analysis of these case studies is useful in three respects. First, it vividly demonstrates the diverse inner-workings of two of the most-used and powerful PPP formations in England and the positioning of the private sector within these. Second, the comparative dimension of this study enables us to see the geographically hybrid nature of BIDs and TCM schemes, simultaneously stressing the commonalities and differences between these ‘actually-existing’ partnerships (Nijman, 2007; Ward, 2008). Third, these empirical insights can, and will, inform the conceptual points made by this paper. Methodologically, this paper draws from semi-structured elite interviews conducted between January 2006 and January 2007. Interviews were conducted with four groups of actors, namely those involved in the national governance of TCM and BIDs; partnership staff and members of the three local partnerships; representatives of other institutions that worked closely with the partnerships; and a small number of business elites who had limited or fractured engagement with the local partnerships. In total, 49 interviews were conducted, each of whom were recorded, transcribed and encoded using the software package NVivo7. The case studies of CV One in Coventry, the Plymouth City Centre Company (hereafter Plymouth CCC) and Reading UK Community Interest Company (hereafter Reading UK CIC) were selected because of their differentiated TCM and BID organisational structures (as will be detailed later).

This paper has offered an insight into the positioning of businesses and business elites in urban governance and the motivations behind their involvement through a comparative analysis of TCM and BID partnerships in the urban centres of Coventry, Plymouth and Reading. It has demonstrated that the positioning of the private sector within urban governance is more complex, multifarious, selective and fractured than previous accounts of urban governance and partnership discourses have implied. Varying from partnership to partnership, businesses are nearly always involved with urban governance in at least one of three ways: as internal facilitators (e.g. creators, governors, service deliverers), external facilitators (e.g. voters, funders, lobbyists, consultees) and recipients (e.g. service users, representees, beneficiaries). English BIDs go beyond most business-PPP relations by positioning business occupiers as (external) voters and mandatory funders. It remains to be seen whether these unique tactics will be replicated by non-BID or TCM partnerships. One key issue that can be drawn out from this study is that of scalar relations. Quite simply, the dynamics of business involvement in TCMs and BIDs is not just a local issue. Local decisions, politics, economic plights and organisational structures are vitally important in contingently shaping business involvement. However, as Jessop et al. (1999) have argued, excessively ‘localist’ readings are inadequate as they overlook the ways in which decisions and actions of local actors and the contexts in which they act and make decisions are shaped, subtly and not so subtly, by extra-local actors, institutions, decisions, rules and processes. In this paper, we have seen that a multitude of extra-local factors influence the ways in which the private sector is positioning within TCM schemes and BIDs. These range from the desire of head-offices (nearly always located elsewhere) to cast BID votes and pressure store managers into participating in the BIDs to the national government ‘rule regimes’ which, for instance, develop the legal requirements of company directors and exclude property owners from being taxed and voting in BID ballots. Actors such as the local business elites in Coventry, Plymouth and Reading are not dupes, of course, and have a significant degree of autonomy in how they engage with, or do not engage with, others and in how they interpret and implement centrally prescribed policies and advice. Fundamentally though, they are acting and thinking in a (shifting) context not of their own choosing. Urban politics, in sum, is not confined to the boundaries of the city. The research conducted supports Peck’s (1995) argument that it is state restructuring and the licensing out of state power that creates the institutional space for business elites and businesses to occupy in the first place. Like many other partnerships, TCM schemes would not have been created if councils did not engage in ‘partnership working’ or privatise council services. However, as Wood (2004) correctly notes, the political empowerment of the private sector requires business elites and businesses to get involved. There must be some complicity and activity by the private sector for PPPs such as TCM and BIDs to exist. In line with Logan and Molotch, 1987, Molotch, 1976, Molotch, 1993, Cox and Mair, 1988 and Cox and Mair, 1989 arguments, the study also suggests that the thirst for profit maximisation is the primary motivation for the political mobilisation of the private sector. Whether or not the partnerships and their services will enhance the profitability of their relatively-fixed assets appears to be the central factor in the private sectors’ decisions to donate time, money and resources. This is not to say that other factors, such as a cultural attachment to place, are not important (Wood et al., 1998). Rather, it is to say that they are often only secondary considerations. This study has also demonstrated that material interests do not automatically translate into local political activity in the way that Cox and Mair implicitly suggest (Wood et al., 1998 and Wood, 2004). This would be a functionalist argument. Instead, decisions to take part are made by actors who ‘weigh up’ the potential advantages and disadvantages of taking part, and predict the potential effects on their assets (Justice, 2006). Furthermore, their involvement, on boards especially, is subject to negotiation with the partnerships. Some are encouraged or invited while others are ignored, overlooked or rejected. This leads on to the final key point: private sector involvement is uneven and highly selective. Business elites have more influence on some institutions, policies and services than others, and this influence is temporally and spatially variable. Furthermore, as Peck (1995) noted several years ago, it is often only a select few business elites who are able to take part in these new governance structures. Some are not included or have tokenistic involvement, while others struggle to make their views heard. What is more, the private sectors’ willingness to actually get involved, irrespective of whether the state or partnerships want them to, is highly variable. Many do not share the ‘official line’ that the partnerships will make significant returns on their investments and, as a result, are reluctant to assist. Inclusion and exclusion in urban governance, therefore, is shaped by the willingness and abilities of the private sector to get involved and articulate their views vis-à-vis the partnerships and other state institutions’ entry requirements, monitoring procedures and communication channels. In sum, the politics of business involvement in urban governance is complex, centred primarily on the desire for profit maximisation, and, as the promotional rhetoric of the new urban politics rarely tells us, involves significant and uneven volumes of apathy, dissensus and exclusion.