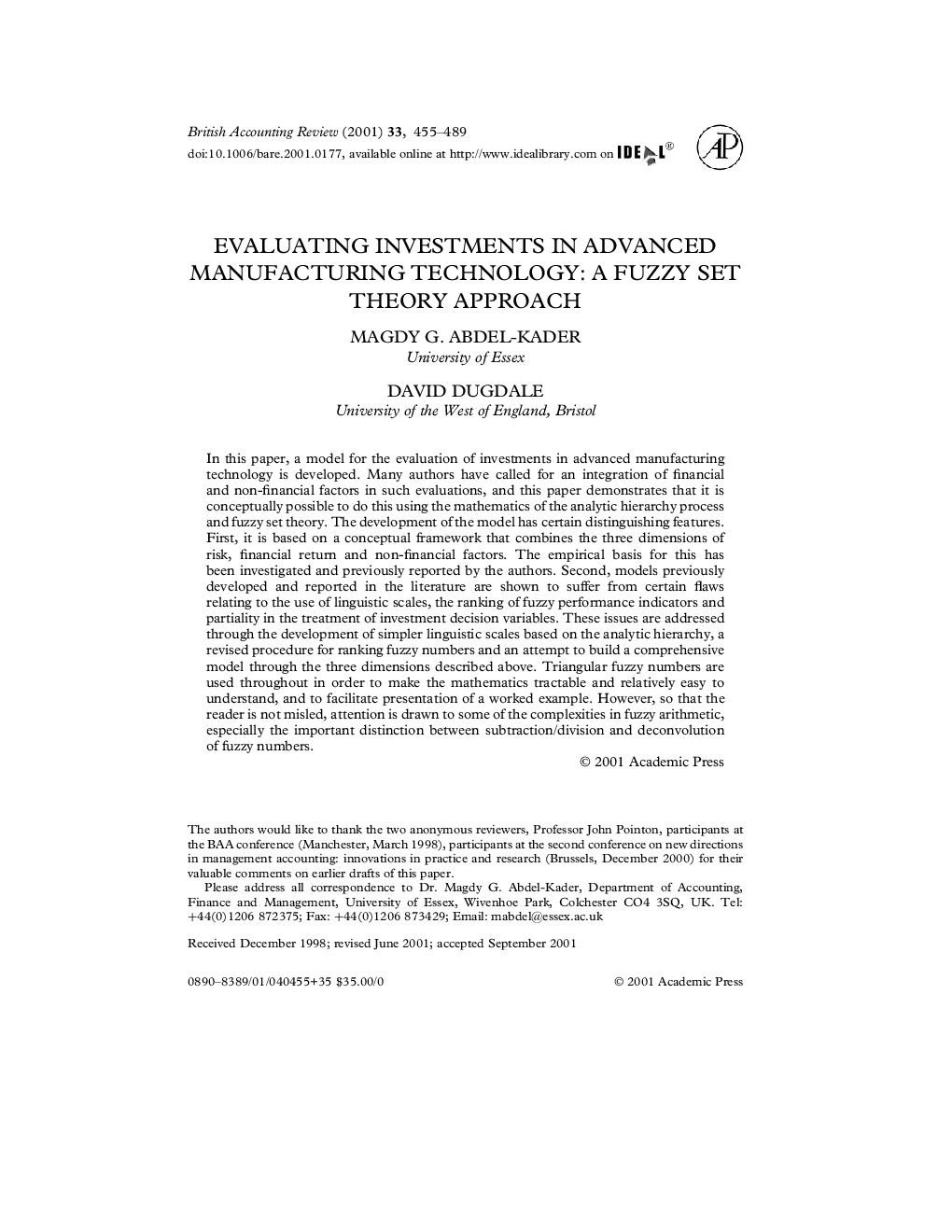 In this paper, a model for the evaluation of investments in advanced manufacturing technology is developed. Many authors have called for an integration of financial and non-financial factors in such evaluations, and this paper demonstrates that it is conceptually possible to do this using the mathematics of the analytic hierarchy process and fuzzy set theory. The development of the model has certain distinguishing features. First, it is based on a conceptual framework that combines the three dimensions of risk, financial return and non-financial factors. The empirical basis for this has been investigated and previously reported by the authors. Second, models previously developed and reported in the literature are shown to suffer from certain flaws relating to the use of linguistic scales, the ranking of fuzzy performance indicators and partiality in the treatment of investment decision variables. These issues are addressed through the development of simpler linguistic scales based on the analytic hierarchy, a revised procedure for ranking fuzzy numbers and an attempt to build a comprehensive model through the three dimensions described above. Triangular fuzzy numbers are used throughout in order to make the mathematics tractable and relatively easy to understand, and to facilitate presentation of a worked example. However, so that the reader is not misled, attention is drawn to some of the complexities in fuzzy arithmetic, especially the important distinction between subtraction/division and deconvolution of fuzzy numbers.

The use of traditional investment models based on return on investment (ROI) or cash flow analysis, payback, net present value, internal rate of return, for Advanced Manufacturing Technology (AMT) projects has been criticized for failing to capture all relevant information. Arguably these models emphasize quantitative, financial analysis but fail to capture many of the ‘intangible’ benefits that should flow from AMT investments such as greater manufacturing flexibility, improved product quality and better employee morale (see for example, Abdel-Kader, 1997; Chen & Small, 1996; Dugdale & Jones, 1995; Accola, 1994; Cheung, 1993; Lavelle & Liggett, 1992; Naik & Chakravarty, 1992; Azzone et al., 1992; Rayburn, 1989; Park & Son, 1988; Srinivasan & Millen, 1986; Kaplan, 1986; ACARD, 1983; Knott & Getto, 1982). It is also argued that the high risk inherent in new technologies often leads to the use of arbitrarily high hurdle discount rates (Accola, 1994; Canada & Sullivan, 1990; Kaplan & Atkinson, 1989; Kaplan, 1986). This disadvantages long-term projects with large cash flows in the later part of their lives, and because there are many different determinants of risk, it is difficult to capture them all through a single modification of the discount rate (Ronen & Sorter, 1972). Also, adjustments to the discount rate are affected by managers’ attitudes toward risk rather than by an explicit representation of the risks inherent in the investment alternatives (Accola, 1994). Lefley (1996, p. 347) concluded: ‘there is a need for a more sophisticated approach to the appraisal of AMT projects, one that will take into account the strategic nature and the full benefits from such investments’. (emphasis added). This echoed Currie (1994, p. viii) who argued for: ‘: : :a new method of evaluating AMT should be developed which includes a wider array of financial and non-financial benefits. This would improve managements’ understanding of some of the key advantages of AMT and, in the process, supplement traditional management accounting techniques (DCF, NPV, payback) by considering the benefits of quality, organisational learning, training and process improvement and innovation’ (emphasis added). Slagmulder et al. (1995) summarized: ‘: : : more and more authors are convinced that good investment appraisal requires that strategic and financial considerations be reconciled and integrated’. In response to this need ‘integrated’ models that can accept both quantitative and qualitative factors have been suggested. Simpler models are based on a weighted combination of attribute scores (Meredith & Suresh, 1986; Nelson, 1986; Parsaei & Wilhelm, 1989) while more sophisticated models are often based on the Analytic Hierarchy Process (AHP) (Naik & Chakravarty, 1992; O’Brien & Smith, 1993; Srinivasan & Millen, 1986; Putrus, 1990; Accola, 1994; Angelis & Lee, 1996). However, even these relatively sophisticated models can be criticized because the use of precise values does not reflect the qualitative and subjective nature of many factors. To overcome this criticism an AMT investment model based on the mathematics of fuzzy set theory (Zadeh, 1965) and hierarchical structure analysis (Saaty, 1980) is developed. The model is designed to permit estimated ‘fuzzy’ values and to provide a consistent method of accounting for non-financial factors. A basis for the comparison of competing alternatives is also provided. The remainder of the paper is organized as follows. The next section provides a brief discussion of the basic elements of fuzzy set theory. This is followed by a review of previous fuzzy investment models. The proposed model is then developed followed by an illustrative example. The last section sets out some conclusions.

In this paper a model for AMT investment decision making has been developed. The model is based on an empirically grounded framework and builds upon several theoretical themes in the AMT investment literature. In particular it draws on models based on the analytic hierarchy process and uses both fuzzy numbers and linguistic variables. The model therefore synthesizes several aspects of existing models and provides a comprehensive overview of the problem. The proposed model does not provide a single measure that combines all factors, rather a distinction was drawn between factors that can be quantified and factors that can only be subjectively assessed. Hence, Accola’s suggestion of a three-dimensional framework was followed in which a separate measure for each dimension: financial return, non-financial benefits and risk, was developed. The final decision is subject to decision makers’ preferences. However, if all benefits can be reasonably quantified in cash flows terms, then the three-dimensional framework can be collapsed into two-dimensions, financial return and risk. In developing the model two issues/problems have been identified. The first issue relates to fuzzy linguistic variables where we note that Wilhelm & Parsaei’s suggestion seems complex and that the fuzzy operations of concentration and dilation when applied to concepts such as ‘important’ lead to counter-intuitive results in the context of investment appraisal. We have suggested a refinement in the construction of fuzzy linguistic scales—making such scales dependent on decision maker’s preferences through the use of pairwise comparisons. The proposed method also avoids the use of concentration and dilation in the construction of the scale. The second issue relates to the difficulties that can arise when fuzzy variables are to be ranked, as they must be when choosing between competing investment projects. This issue has been addressed through the development of a new ranking method building on existing methods described in the literature. We have set out a model to demonstrate that the analytic hierarchy technique can be combined with fuzzy set theory in investment decision making. The technical issues can be overcome and the use of triangular fuzzy numbers together with Chiu & Park’s simplifying assumptions make the specific calculations quite simple. However, this apparent simplicity and availability of specialist software should not obscure the inherent difficulties in the mathematics of fuzzy sets theory. We drew attention in particular, to the issue of deconvolution in subtraction and division of fuzzy numbers.