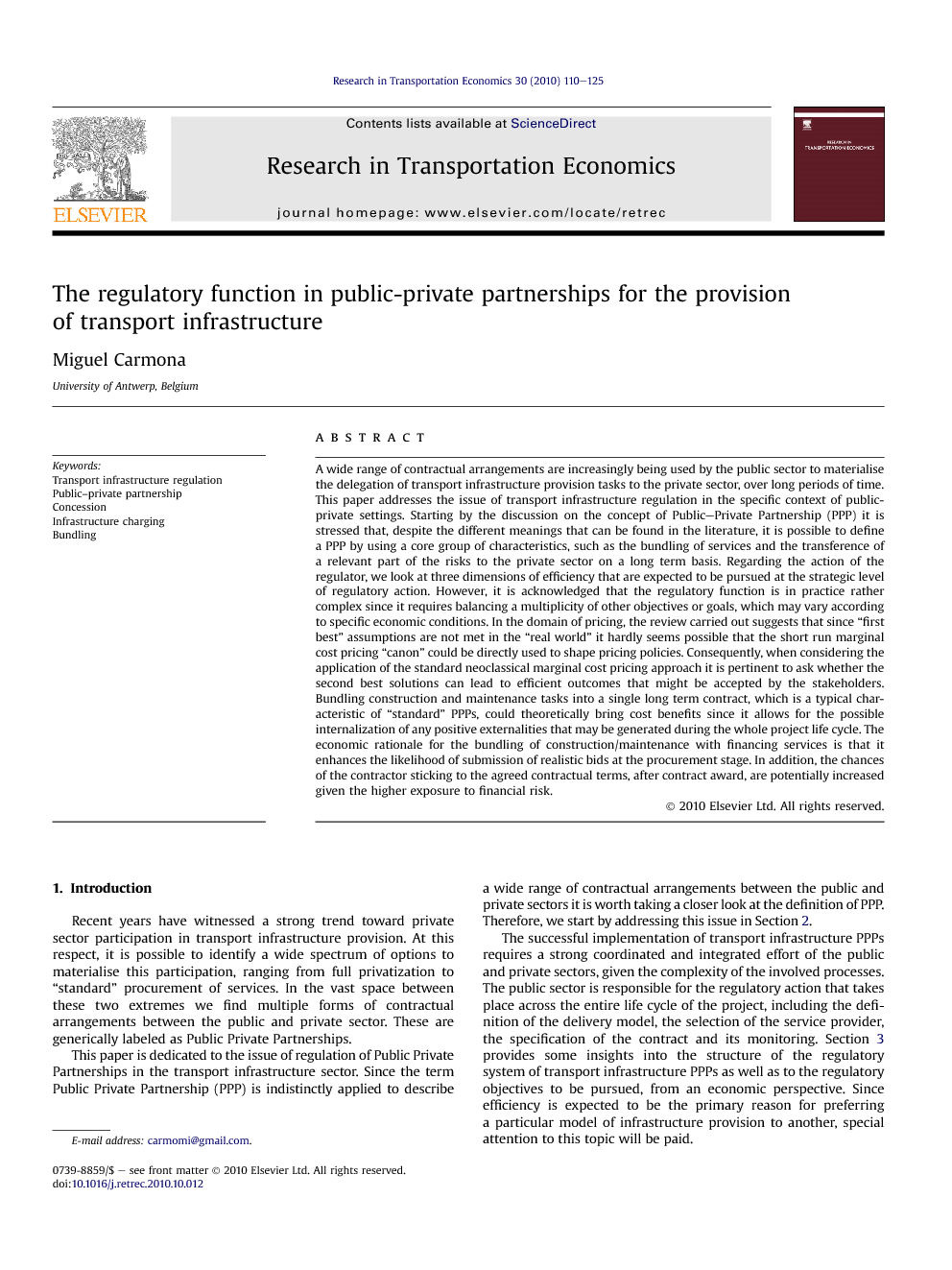 A wide range of contractual arrangements are increasingly being used by the public sector to materialise the delegation of transport infrastructure provision tasks to the private sector, over long periods of time.This paper addresses the issue of transport infrastructure regulation in the specific context of publicprivate settings. Starting by the discussion on the concept of PublicePrivate Partnership (PPP) it is stressed that, despite the different meanings that can be found in the literature, it is possible to define a PPP by using a core group of characteristics, such as the bundling of services and the transference of a relevant part of the risks to the private sector on a long term basis. Regarding the action of the regulator, we look at three dimensions of efficiency that are expected to be pursued at the strategic level of regulatory action. However, it is acknowledged that the regulatory function is in practice rather complex since it requires balancing a multiplicity of other objectives or goals, which may vary according to specific economic conditions. In the domain of pricing, the review carried out suggests that since “first best” assumptions are not met in the “real world” it hardly seems possible that the short run marginal cost pricing “canon” could be directly used to shape pricing policies. Consequently, when considering the application of the standard neoclassical marginal cost pricing approach it is pertinent to ask whether the second best solutions can lead to efficient outcomes that might be accepted by the stakeholders. Bundling construction and maintenance tasks intoa single long term contract, which is a typical characteristic of “standard” PPPs, could theoretically bring cost benefits since it allows for the possible internalization of any positive externalities that may be generated during the whole project life cycle. The economic rationale for the bundling of construction/maintenance with financing services is that it enhances the likelihood of submission of realistic bids at the procurement stage. In addition, the chances of the contractor sticking to the agreed contractual terms, after contract award, are potentially increased given the higher exposure to financial risk.

Recent years have witnessed a strong trend toward private sector participation in transport infrastructure provision. At this respect, it is possible to identify a wide spectrum of options to materialise this participation, ranging from full privatization to “standard” procurement of services. In the vast space between these two extremes we find multiple forms of contractual arrangements between the public and private sector. These are generically labeled as Public Private Partnerships. This paper is dedicated to the issue of regulation of Public Private Partnerships in the transport infrastructure sector. Since the term Public Private Partnership (PPP) is indistinctly applied to describe a wide range of contractual arrangements between the public and private sectors it is worth taking a closer look at the definition of PPP. Therefore, we start by addressing this issue in Section 2. The successful implementation of transport infrastructure PPPs requires a strong coordinated and integrated effort of the public and private sectors, given the complexity of the involved processes. The public sector is responsible for the regulatory action that takes place across the entire life cycle of the project, including the definition of the delivery model, the selection of the service provider, the specification of the contract and its monitoring. Section 3 provides some insights into the structure of the regulatory system of transport infrastructure PPPs as well as to the regulatory objectives to be pursued, from an economic perspective. Since efficiency is expected to be the primary reason for preferring a particular model of infrastructure provision to another, special attention to this topic will be paid. Sections 4 and 5 of this chapter respectively address two key components of regulatory action that are relevant for transport infrastructure PPPs. The first concerns the issue of infrastructure charging, focusing on the prescriptions of economic theory and highlighting the arguments for the adoption of “realistic” policies deviating or departing from canonical theoretical models. A particular topic of interest in this area, addressed in Section 4, is the debate between the advocates of full cost allocation approaches and the supporters of the standard neo-classic marginal cost pricing approach. The second, which is particularly pertinent in the early stage of formulation of the PPP, concerns the bundling of transport infrastructure services. In this area, the discussion is dedicated to the economic rationale of two common approaches to bundling: one is the bundling of construction and maintenance services and the other the bundling of construction/maintenance with financing services. Both bundling approaches can be generally found in transport infrastructure PPPs. It should be stressed that the theoretical review as well as the empirical examples presented in this chapter focus on the particular case of road transport infrastructure, although much of the insights and findings are also applying to PPPs in other transport modes. The final section contains a synthesis of the conclusions.

In this chapter the issue of economic regulation in the context of public-private settings for the provision of transport infrastructure has been addressed. In what concerns the concept of Public Private Partnership (PPP), it appears that albeit conceptual difficulties it is possible to identify a core group of minimum characteristics to define a PPP, such as the bundling of services and the transference of a relevant part of the risk to the private sector on a long term basis. In the case of public budget and public debt restrictions, which constrain the capacity of the public sector to deliver new investments in transport capacity expansion and maintenance, PPPs are generally perceived as a “miraculous” solution. However, the best possible use of limited public resources and the guarantee that the project adds economic value to the society can only be achieved if the political decision makers and regulators put a strong focus on the pursuit of efficiency. It is suggested that three dimensions of efficiency, namely dynamic allocative efficiency, efficiency in transport infrastructure utilisation and productive efficiency should be taken into consideration when specifying single project objectives. To achieve allocative dynamic efficiency it is required that the whole life-cycle social benefits exceed the costs of infrastructure provision. Efficiency in resources use is attained by charging the price that promotes the best possible use of available capacity. In general, the decision on whether to charge or not a project is often complex and requires due attention to the way how distortionary costs of different possible tax financing sources affect the economic value of the project. In practice, the choice between user charges and taxation, from the single project perspective and in the absence of public financing constraints, lies on ex-ante considerations on network traffic expectations, user’s willingness to pay and other political concerns. On this basis, a possible baseline recommendation might consist in not imposing charges at all. This might be the case for a non-congested road with much capacity in relation to traffic over the initial years of operation. Given the long term nature of most PPPs, toll adjustment provisions are a necessary element of the pricing scheme and contribute to manage the impacts of unpredictable variations in traffic demand. The magnitude of the traffic risk, the degree of trust between parties (public and private) and the maturity of the regulatory system and institutional environment are factors that need to be taken into account when formulating efficient toll adjustment schemes. Concerning the discussion on pricing doctrines, it is underlined that since “first best” assumptions are not met in the “real world” it hardly seems possible that the short run marginal cost pricing “canon” could be directly used to shape pricing policies. Consequently, the “hot” question concerning the practical implementation of marginal cost pricing is whether modifications to the pure SRMC principle (i.e. second best solutions) can lead to efficient solutions that are feasible (i.e. accepted by the stakeholders) and realistic (i.e. possible, given overall economic constraints). Still concerning infrastructure charging, it should be stressed that cost allocation approaches are used to derive feasible, fair and efficient charging policies in the context of “hard” public budget constraints. These approaches are generally perceived to perform better in terms of fairness than marginal cost based pricing since all costs are allocated to the infrastructure users. However, cost allocation procedures are not exempted from criticisms, which mainly refer to the issue of arbitrariness in the allocation of common costs. Notwithstanding, recent research suggests that the level of arbitrariness in cost allocation procedures can be substantially reduced through the application of methods based on cooperative game theory. The objective of productive efficiency is linked with cost minimisation in the provision of road infrastructure and requires that outputs are obtained at the least possible cost. However, a decrease in the cost of output does not necessarily means that efficiency is improved from a social perspective. For instance, lower price of labour results in a benefit for the employer but has a negative impact on the worker. The two effects cancel out with no impact on efficiency. Bundling construction and maintenance into a single long term contract, which is a typical characteristic of “standard” PPPs, could theoretically bring cost benefits since allows for the possible internalization of any positive externalities that may be generated during the whole project life cycle. Nevertheless, to the best of our knowledge, robust empirical evidence demonstrating that PPPs are able to provide for lower life-cycle costs and revealing how significant the costs savings are, in the case of transport infrastructure projects, is still to be produced. It should be also pointed out that the economic rationale for bundling of construction/maintenance with financing services is that enhances the chances of submission of realistic bids. In addition, the chances of the contractor sticking to the agreed contractual terms (after contract award) are increased given the higher exposure to financial risk. However, the delegation of financing to the private sector has the drawback of higher financing costs. Therefore, in theory and in the absence of public finance constraints, the decision to delegate the funding component of the project (partially or fully) to the private sector would have to take into account the trade-off between potential superior adherence of the contractor to the agreed terms and the likely higher financial costs of the solution.