عنوان انگلیسی
Does the political and economic context influence the success of a transport project? An analysis of transport public-private partnerships
دانلود فوری مقاله + سفارش ترجمه 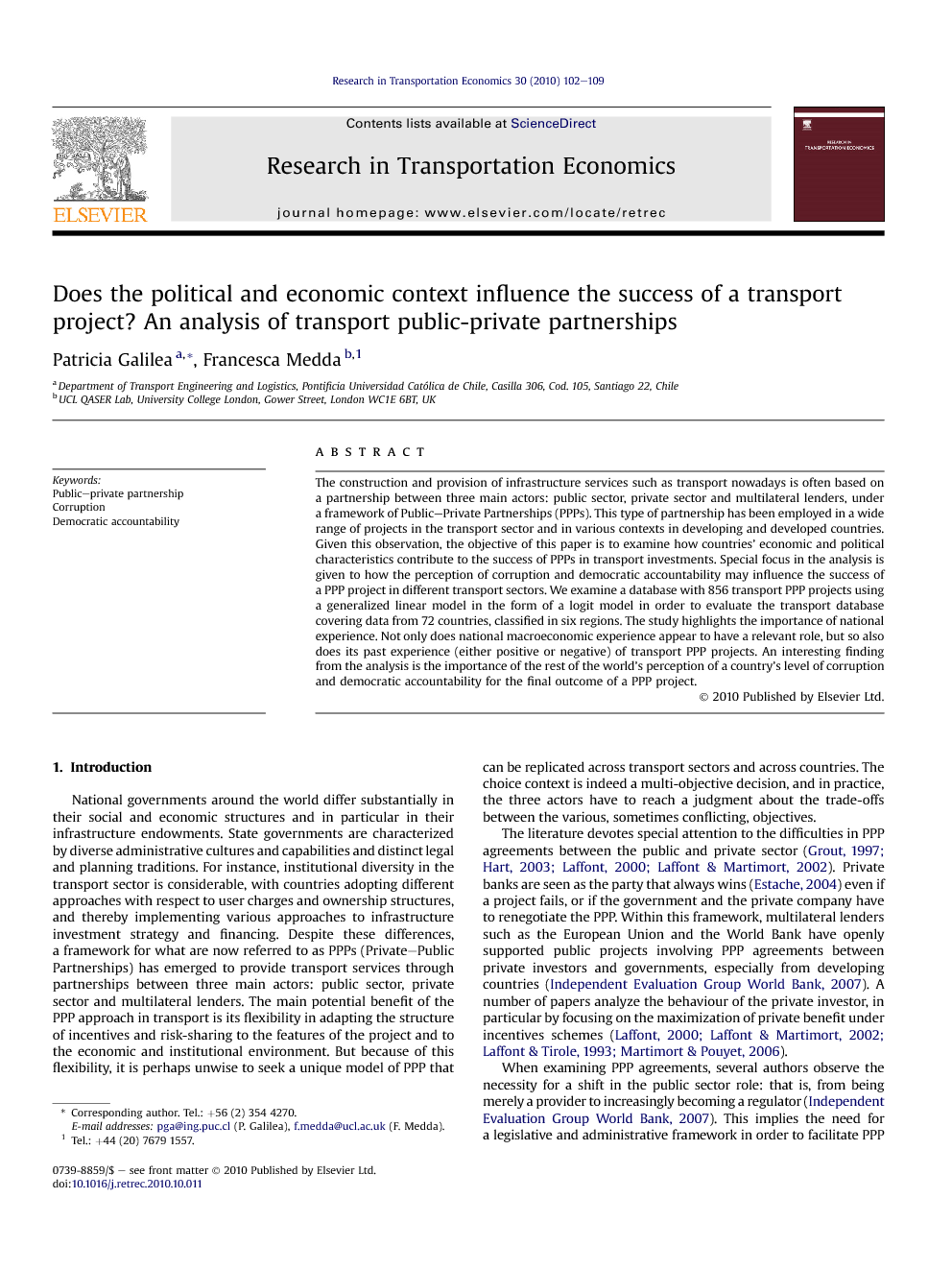 The construction and provision of infrastructure services such as transport nowadays is often based on a partnership between three main actors: public sector, private sector and multilateral lenders, under a framework of Public–Private Partnerships (PPPs). This type of partnership has been employed in a wide range of projects in the transport sector and in various contexts in developing and developed countries. Given this observation, the objective of this paper is to examine how countries’ economic and political characteristics contribute to the success of PPPs in transport investments. Special focus in the analysis is given to how the perception of corruption and democratic accountability may influence the success of a PPP project in different transport sectors. We examine a database with 856 transport PPP projects using a generalized linear model in the form of a logit model in order to evaluate the transport database covering data from 72 countries, classified in six regions. The study highlights the importance of national experience. Not only does national macroeconomic experience appear to have a relevant role, but so also does its past experience (either positive or negative) of transport PPP projects. An interesting finding from the analysis is the importance of the rest of the world’s perception of a country’s level of corruption and democratic accountability for the final outcome of a PPP project.

National governments around the world differ substantially in their social and economic structures and in particular in their infrastructure endowments. State governments are characterized by diverse administrative cultures and capabilities and distinct legal and planning traditions. For instance, institutional diversity in the transport sector is considerable, with countries adopting different approaches with respect to user charges and ownership structures, and thereby implementing various approaches to infrastructure investment strategy and financing. Despite these differences, a framework for what are now referred to as PPPs (Private–Public Partnerships) has emerged to provide transport services through partnerships between three main actors: public sector, private sector and multilateral lenders. The main potential benefit of the PPP approach in transport is its flexibility in adapting the structure of incentives and risk-sharing to the features of the project and to the economic and institutional environment. But because of this flexibility, it is perhaps unwise to seek a unique model of PPP that can be replicated across transport sectors and across countries. The choice context is indeed a multi-objective decision, and in practice, the three actors have to reach a judgment about the trade-offs between the various, sometimes conflicting, objectives. The literature devotes special attention to the difficulties in PPP agreements between the public and private sector (Grout, 1997, Hart, 2003, Laffont, 2000 and Laffont and Martimort, 2002). Private banks are seen as the party that always wins (Estache, 2004) even if a project fails, or if the government and the private company have to renegotiate the PPP. Within this framework, multilateral lenders such as the European Union and the World Bank have openly supported public projects involving PPP agreements between private investors and governments, especially from developing countries (Independent Evaluation Group World Bank, 2007). A number of papers analyze the behaviour of the private investor, in particular by focusing on the maximization of private benefit under incentives schemes (Laffont, 2000, Laffont and Martimort, 2002, Laffont and Tirole, 1993 and Martimort and Pouyet, 2006). When examining PPP agreements, several authors observe the necessity for a shift in the public sector role: that is, from being merely a provider to increasingly becoming a regulator (Independent Evaluation Group World Bank, 2007). This implies the need for a legislative and administrative framework in order to facilitate PPP investments (Medda & Carbonaro, 2007). Although many countries use PPP arrangements, we observe different ways of adopting this approach due to different cultural influences and traditions in planning and management of public works, deficiencies in legal and institutional structures, and different degrees of political awareness and acceptance of the PPP concept. Hammami, Ruhashyankiko, and Yehoue (2006) highlight the potential significance of a country’s past experience in PPPs in attracting further PPP projects to that country. However, we observe that there is as yet no empirical evidence showing how this experience may (or may not) affect later PPP outcomes. Also, the connection between a country’s level of corruption has not been studied in the light of its influence in the success of a transport PPP project. Several studies have been made about corruption and its influence on economic growth (Gould and Amaro-Reyes, 1983, Huntington, 1968, Klitgaard, 1991, Leff, 1964, Mauro, 1995, Schleifer and Vishny, 1993 and United Nations, 1989), but none has been conducted using a stringent microeconomic methodology. The objective of the present paper is to examine how the three actors, public sector, private sector and multilateral lenders, each contributes to the success of PPPs in transport investments, by considering different political and socioeconomic contexts. We will also focus our analysis on the effect of a country’s level of corruption and democratic accountability in the success of a PPP project. The paper is organized as follows: Section 2 presents our hypotheses with their theoretical backgrounds. In Section 3, we describe the dataset used to test the hypotheses previously described, outline the dependent and independent variables employed in our analysis, and explain the modelling procedure. Section 4 describes and analyzes our results on the variables that may affect a PPP outcome and thus concludes the paper.

PPP projects have gained relevance as a way to finance transport infrastructure and services. PPPs have been supported by governments, sponsored by the private sector, and have also been favoured by multilateral agencies. Although there are numerous successful PPP projects, notwithstanding, there have also been a large number of “divorces” (Estache, 2004). In this paper we have presented empirical evidence on the role that country experience in PPPs, private investors, and multilateral lenders may play in the positive outcome of a PPP in transport. A country’s past experience in PPP agreements in transport is important, not only in attracting new investment projects, but also in instilling greater confidence in the success of present projects. This also means that countries with poor past experience, or no past at all, will find it more problematical to complete successful PPP projects. However, if multilateral lenders want to promote PPP investments, they should support projects in countries with limited or no experience and help them set up a regulatory and/or legislative framework for PPP projects. It is not surprising that GDP growth and the current account balance as a percentage of the GDP may impact on the success of a PPP project. Unfortunately, countries that require successful PPPs often have very low (or even negative) GDP growth and a negative account balance. As Hammami et al. (2006) also, highlight development agencies should assist these countries to pull them out of the underdevelopment trap. The perception of a country’s level of corruption and democratic accountability appears to be relevant in the final outcome of a PPP project. Countries with governments perceived as corrupted will hardly find international investors (often those with the most experience in this type of project). Projects developed in countries with governments perceived as having low democratic accountability can achieve better performance than projects in countries perceived as having higher democratic accountability. In this case it seems that autarchies may have a better capacity to assist PPP projects, if needed, than in the case of alternating democracies. The importance of the region where the project is located has proven to be relevant, making Latin American projects more attractive for success, and thus for future investors. Although European and African projects in the developing world do not have a poor record in terms of their success, they do have less experience in PPP agreements in transport, and this situation could be damaging their score (in relation to Latin American projects). Development agencies should focus on these regions, not only to allow them to grow in terms of experience, but also to help them define a regulatory framework for PPP projects. A critical point in our research is certainly the definition used for the success of a PPP, since we consider a variable linked with economic performance, rather than use a variable related to the status of a project. Our further research will be directed towards obtaining more precise investment information in order to broaden our results. We will compare the results with a similar analysis of transport PPP projects in the developed world, since certain conclusions, such as the effect of corruption, may be different in this scenario. Also, it would be interesting to study the success of PPPs focusing within one transport subsector in order to add more specific characteristics and some efficiency indicators into the analysis.