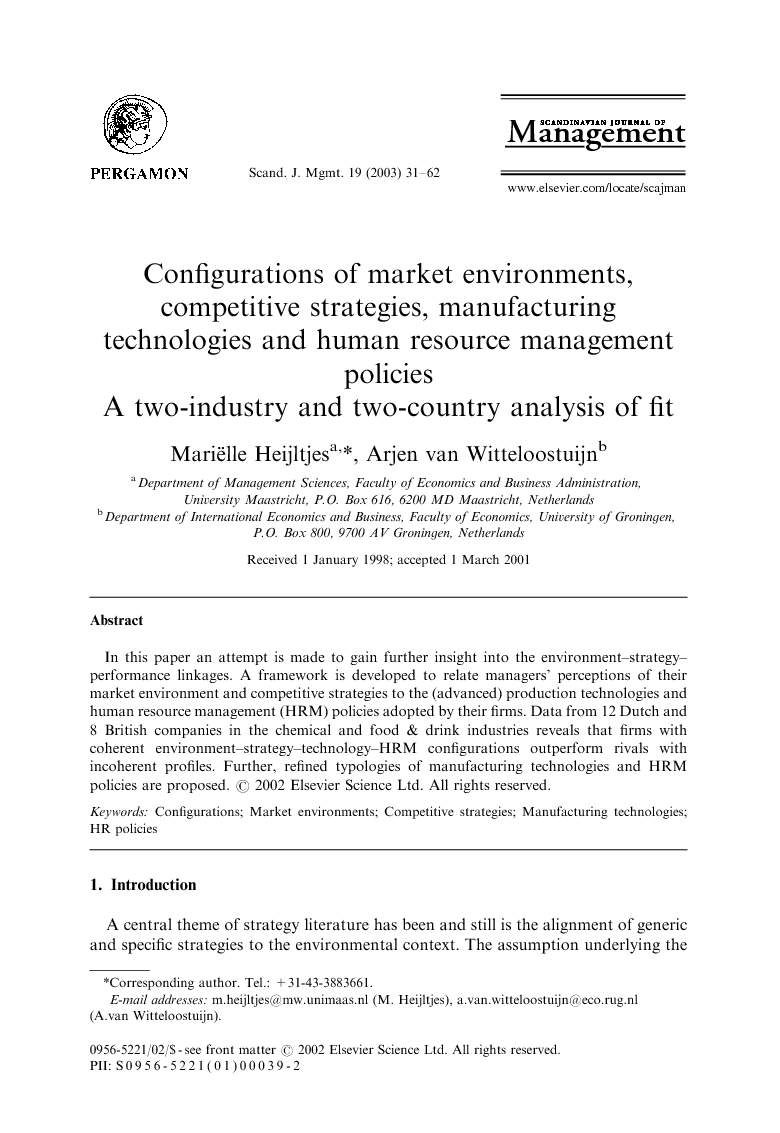 In this paper an attempt is made to gain further insight into the environment–strategy–performance linkages. A framework is developed to relate managers’ perceptions of their market environment and competitive strategies to the (advanced) production technologies and human resource management (HRM) policies adopted by their firms. Data from 12 Dutch and 8 British companies in the chemical and food & drink industries reveals that firms with coherent environment–strategy–technology–HRM configurations outperform rivals with incoherent profiles. Further, refined typologies of manufacturing technologies and HRM policies are proposed.

A central theme of strategy literature has been and still is the alignment of generic and specific strategies to the environmental context. The assumption underlying the great majority of these so-called contingency studies is that a fit between environment, strategy and structure has to be established if the organization is to perform effectively. Over the years this hypothesis has been supported by an innumerable number of empirical studies (e.g., Dess & Davis, 1984; Miller, 1988; Conant, Mokwa, & Rajan Varadarajan, 1990; Powell, 1992; Schroeder, Congden, & Gopinath, 1995; Ward, Bickford, & Keong Leong, 1996). Our main reason for adding another study to the impressive stock of existing research is that most alignment studies focus on a few elements of the environment–strategy–structure relationship only. Rarely have they addressed more than a single internal element at the functional strategy level (Zajac, Kraatz, & Bresser, 2000). Although there is a somewhat larger body of research in the ‘gestalt’ perspective that addresses configurations of mainly environmental, strategy and structural variables simultaneously (e.g., Miller & Friesen, 1984; Chakravarthy, 1986; Roth, 1992), the focus in this tradition is not on the examination of the specifics of the underlying separate relationships. Since the effective implementation of strategy involves the alignment of many different elements, there is a need for multi-dimensional empirical studies that combine insights from fit as ‘gestalt’ and fit as matching perspectives (Venkatraman, 1989; Ward, Bickford, & Keong Leong, 1996). The purpose of this study is therefore to explore empirically the relationship between elements of the market environment, competitive strategy and two functional strategies. Specifically, the present study incorporates manufacturing technology and human resource management (HRM) variables in the general environment–strategy–performance framework, and examines this ‘fit’ argument using a British–Dutch data set. The well-established contingency prediction is, then, that firms with coherent environment–strategy–technology–HRM configurations outperform their rivals whose profiles are incoherent. The current study thus provides a contribution to renewing the “strategy–structure–performance paradigm” (Galunic & Eisenhardt, 1994) by: (i) applying a multi-variable and complex model of fit; (ii) taking account of multi-faceted and potentially reciprocal contingencies; and (iii) developing new concepts of co-alignment elements by proposing alternative typologies. The approach adopted in this paper consists of three broad steps. After discussing our chosen perspective on fit and briefly presenting the sample and methodology, we come to step 1, which consists of an empirical specification of the core variables; step 2 then builds on this specification and offers some propositions on the potential relationships between the variables; step 3 comprises a discussion of the results.