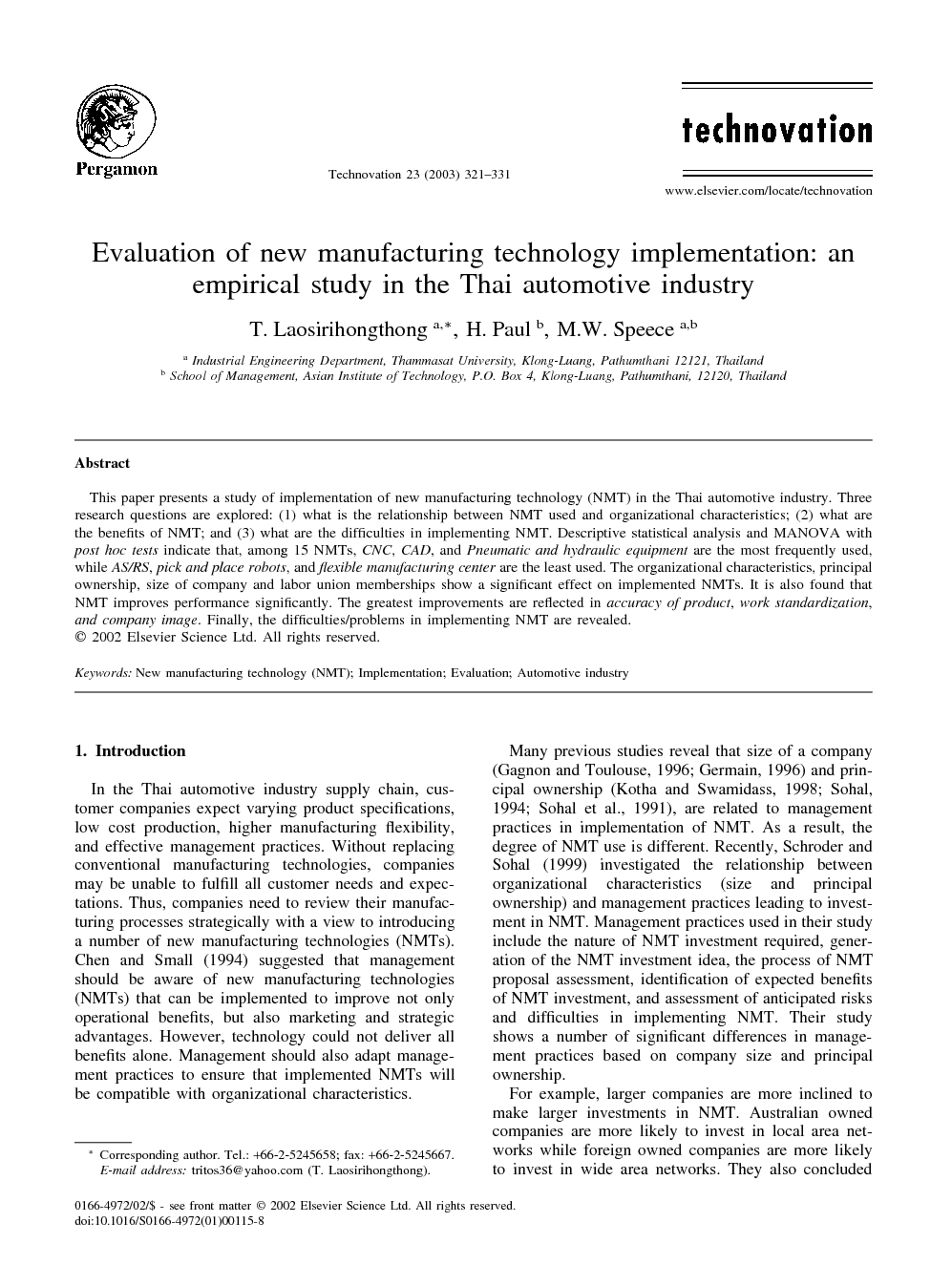 This paper presents a study of implementation of new manufacturing technology (NMT) in the Thai automotive industry. Three research questions are explored: (1) what is the relationship between NMT used and organizational characteristics; (2) what are the benefits of NMT; and (3) what are the difficulties in implementing NMT. Descriptive statistical analysis and MANOVA with post hoc tests indicate that, among 15 NMTs, CNC, CAD, and Pneumatic and hydraulic equipment are the most frequently used, while AS/RS, pick and place robots, and flexible manufacturing center are the least used. The organizational characteristics, principal ownership, size of company and labor union memberships show a significant effect on implemented NMTs. It is also found that NMT improves performance significantly. The greatest improvements are reflected in accuracy of product, work standardization, and company image. Finally, the difficulties/problems in implementing NMT are revealed.

Several conclusions can be drawn from the above results. Most of the NMTs are relatively expensive. It is important for management to understand the usage and applicability of these systems to their companies. The degree of NMT implementation varies widely among companies with different types of ownership. This study indicates that Thai owned companies are more likely to use CNC and CAD than joint venture companies. CAD/CAM is also more widely used in Thai owned than in foreign owned companies. These findings can be explained by the fact that most Thai owned companies have fewer financial, human, and technological resources than foreign owned or joint venture companies. As a result, only stand-alone technologies such as CAD/CAM/CNC are commonly adopted in Thai owned companies. This seems to support of the findings by Kotha and Swamidass (1998) that the nationality of a company has a significant effect in the implementation of NMT. These authors suggest that these differences stem from different access to resources. The study also shows that size of a company influences implementation of NMT in the Thai automotive industry. Companies with more than 200 employees, defined as large by the Ministry of Industry of Thailand, are more likely to adopt NMT than companies with a smaller number of employees. This finding can also be explained by the fact that the cost of adopting these NMTs is much higher than the cost of conventional technologies. In addition, the managerial efforts such as management commitment, human resource management, knowledge about available technology, and technological feasibility analysis are also needed. Large companies are more likely to be capable of undertaking these efforts than small to medium companies. The relation between management and labor play a definite role in the decision to implement NMT. When a good relationship exists, NMT and potential loss of jobs do not threaten the workers. In this study, a relationship between the implementation of NMT and the existence of labor union was indicated for six out of 15 technologies. Companies with labor unions were more likely to adopt these technologies. This study therefore concludes that there seems to be a general level of interdependence between the existence of a union and the implementation of technology. The positive relationship here is different from the negative or lack of relationship found previously. Those studies were done in the West, but it is likely that the different nature of relations between management and labor unions in many Asian countries could explain the positive relationship found in our study. In many Asian countries, including Thailand, when there are unions, they are used to working closely with management, and management is more used to including union interests in their decisions. This study shows that the Thai automotive industry’s use of data-interchange technologies, such as a barcode system and AS/RS is low. So, this group of technologies is recommended for Thai automotive manufacturers who want to be leaders in this industry. They could implement such technologies as a competitive weapon to gain advantage; not many other competitors would have them. This is an example of a proactive approach, which was suggested by Chen and Small (1994). In further research, the distinction between large companies and small to medium companies should be redefined in terms of sales volume and/or technology expenditure.