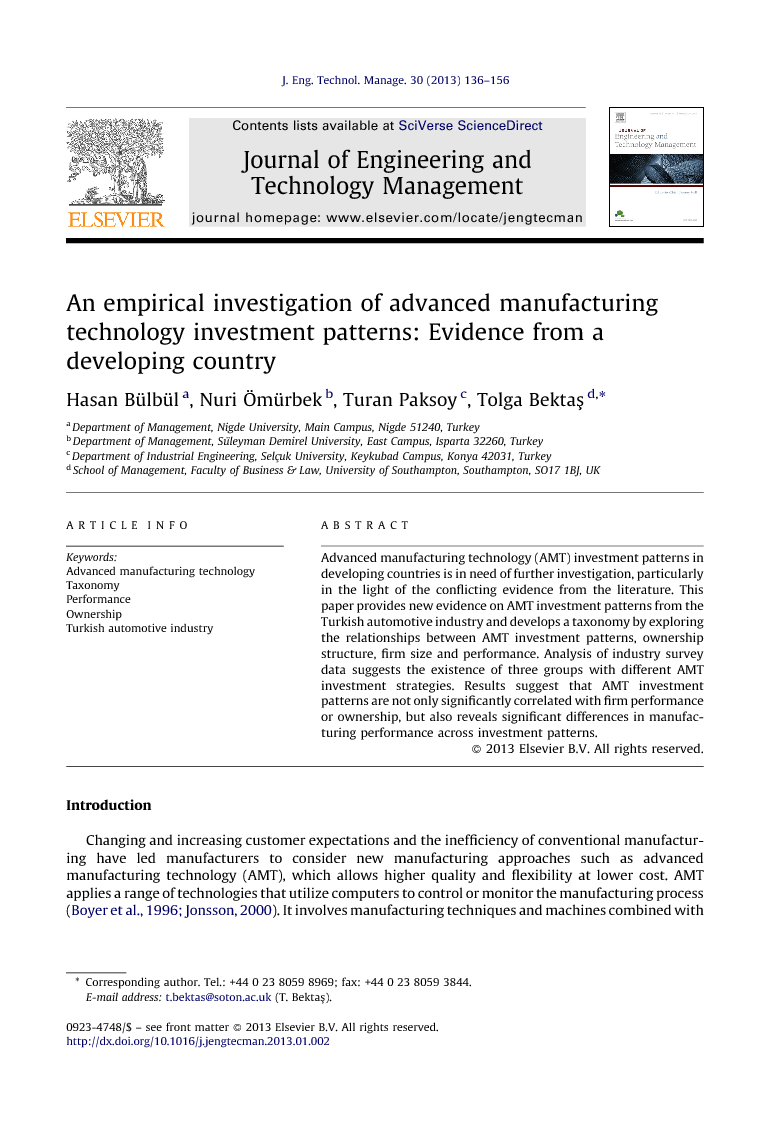 Changing and increasing customer expectations and the inefficiency of conventional manufacturing have led manufacturers to consider new manufacturing approaches such as advanced manufacturing technology (AMT), which allows higher quality and flexibility at lower cost. AMT applies a range of technologies that utilize computers to control or monitor the manufacturing process (Boyer et al., 1996 and Jonsson, 2000). It involves manufacturing techniques and machines combined with information technology, microelectronics and new practices in the manufacturing process (Boyer et al., 1996, Small and Chen, 1997, Burgess and Gules, 1998 and Beaumont et al., 2002). Diaz et al. (2003, p. 579) state that the “relevant literature dealing with an analysis of AMT investment patterns is fairly recent and still relatively scarce”. In their pioneering study, Boyer et al. (1996) proposed a taxonomy of AMTs used in the North American metal-working industries based on relative investment in design, manufacturing and administrative technologies. Following the work of Boyer et al. (1996), Jonsson (2000) and Diaz et al. (2003) present similar taxonomies based on the Swedish metal industry and the Spanish aeronautical industry, respectively. A common characteristic of the studies by Boyer et al. (1996), Jonsson (2000) and Diaz et al. (2003) is their focus on developed countries as far as the analysis of investment patterns in AMT is concerned. However, macro- and micro-economical factors are just important in AMT adoption (Alcorta, 1999), and developing countries face more challenges than developed countries in this respect. For example, firms in developing countries have a less educated workforce, more limited capital and resources, and a less organized economic system relative to firms in developed countries (Prasad et al., 2005). Furthermore, each industry has its own process structure while the type of industry affects the associated manufacturing activities (Hayes and Wheelwright, 1979 and Swamidass and Newell, 1987). For this reason, AMT investments may change from one country and one industry to another, and the technological strategies identified in the previous studies may not be relevant to firms in developing countries. There are three main motivations for this research: (i) the contradictory findings of previous studies empirically exploring the impact of AMT investment strategies on firm performance necessitates further evidence, (ii) the lack of studies exploring AMT investment patterns in developing countries, and (iii) the suggestion repeatedly echoed in the literature to study taxonomies over time and in different contexts ( Miller and Roth, 1994, Kathuria, 2000 and Frohlich and Dixon, 2001), which is taken up in this research. The main aim of this study is to identify whether firms can be differentiated in their investments in AMT and to explore manufacturing and firm performances in the automotive industry of an emerging and developing economy, in this case Turkey1. The study aims to contribute to the operations management literature by (i) providing new evidence from the automotive sector of a developing country in which the use of AMT is highly relevant, which, to our knowledge is a first, and (ii) to provide a taxonomy of AMT investments in this sector and to identify differences and similarities from previous studies. The results are also of use for managers to understand the characteristics of each pattern, and the relationship between the patterns, performance, size, and ownership structure in this context. The rest of the paper is structured as follows. In Literature review and working hypotheses, we present a review of the relevant literature including the existing taxonomies proposed on AMT investments, and describe the working hypotheses. The methodological approach taken in this paper is presented in Methodology, followed by an analysis of the data and presentation of the results in Analysis and results. Conclusions are given in section conclusions.