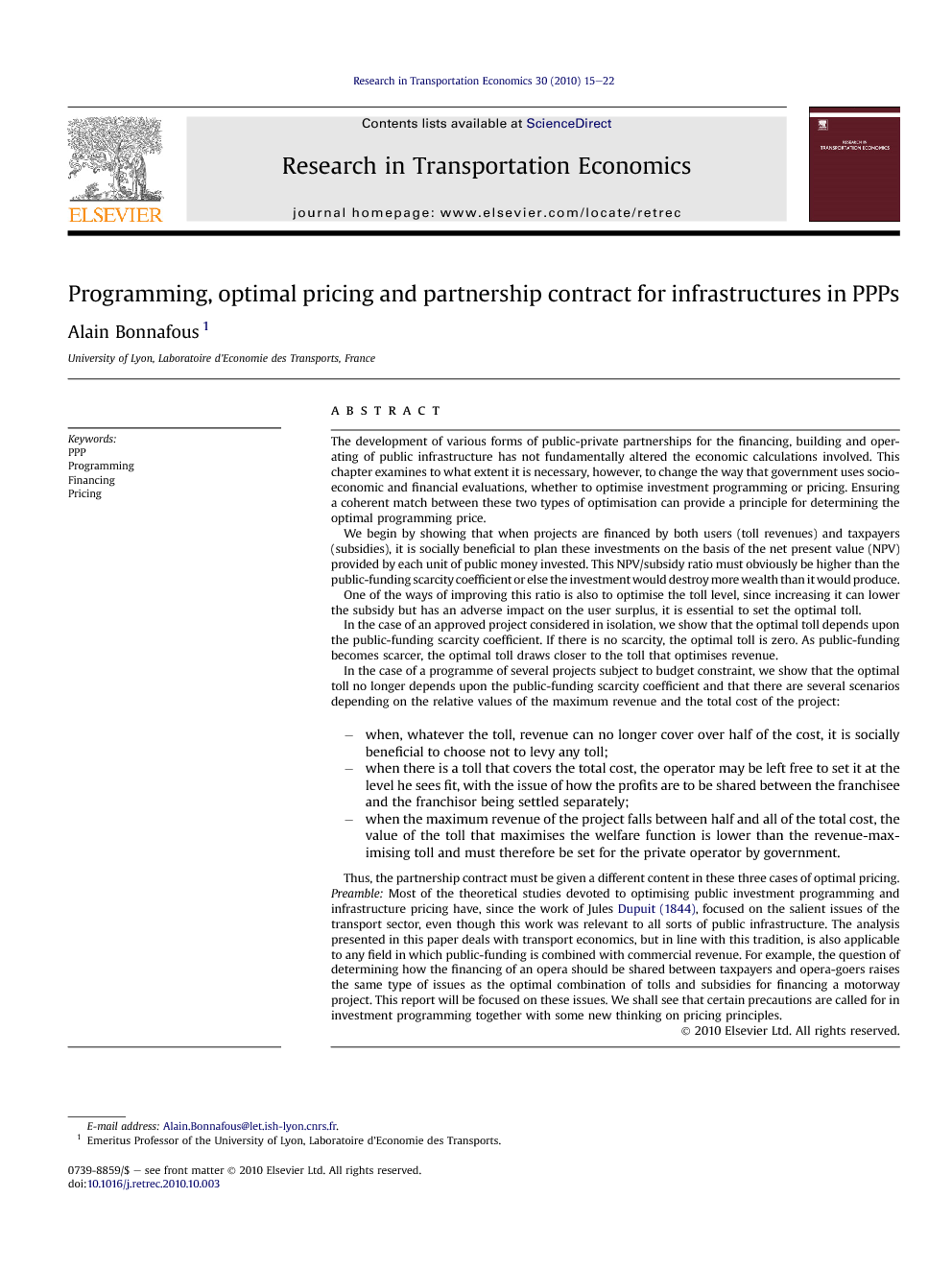 The development of various forms of public-private partnerships for the financing, building and operating of public infrastructure has not fundamentally altered the economic calculations involved. This chapter examines to what extent it is necessary, however, to change the way that government uses socio-economic and financial evaluations, whether to optimise investment programming or pricing. Ensuring a coherent match between these two types of optimisation can provide a principle for determining the optimal programming price.We begin by showing that when projects are financed by both users (toll revenues) and taxpayers (subsidies), it is socially beneficial to plan these investments on the basis of the net present value (NPV) provided by each unit of public money invested. This NPV/subsidy ratio must obviously be higher than the public-funding scarcity coefficient or else the investment would destroy more wealth than it would produce. One of the ways of improving this ratio is also to optimise the toll level, since increasing it can lower the subsidy but has an adverse impact on the user surplus, it is essential to set the optimal toll. In the case of an approved project considered in isolation, we show that the optimal toll depends upon the public-funding scarcity coefficient. If there is no scarcity, the optimal toll is zero. As public-funding becomes scarcer, the optimal toll draws closer to the toll that optimises revenue. In the case of a programme of several projects subject to budget constraint, we show that the optimal toll no longer depends upon the public-funding scarcity coefficient and that there are several scenarios depending on the relative values of the maximum revenue and the total cost of the project: − when, whatever the toll, revenue can no longer cover over half of the cost, it is socially beneficial to choose not to levy any toll; − when there is a toll that covers the total cost, the operator may be left free to set it at the level he sees fit, with the issue of how the profits are to be shared between the franchisee and the franchisor being settled separately; − when the maximum revenue of the project falls between half and all of the total cost, the value of the toll that maximises the welfare function is lower than the revenue-maximising toll and must therefore be set for the private operator by government. Thus, the partnership contract must be given a different content in these three cases of optimal pricing. Preamble Most of the theoretical studies devoted to optimising public investment programming and infrastructure pricing have, since the work of Jules Dupuit (1844), focused on the salient issues of the transport sector, even though this work was relevant to all sorts of public infrastructure. The analysis presented in this paper deals with transport economics, but in line with this tradition, is also applicable to any field in which public-funding is combined with commercial revenue. For example, the question of determining how the financing of an opera should be shared between taxpayers and opera-goers raises the same type of issues as the optimal combination of tolls and subsidies for financing a motorway project. This report will be focused on these issues. We shall see that certain precautions are called for in investment programming together with some new thinking on pricing principles.

The vigorous development of various forms of public-private partnerships in the field of public infrastructure investment and operation has renewed interest in theoretical thinking about what had been considered as methodological givens in the field of the public economy. By definition, a PPP system must combine the rationales of government and of a private operator. The latter’s objective function is the profit of the operation, a profit that is obviously discounted and if appropriate enriched by taking uncertainty into account. The government’s objective function is the discounted variation in social welfare that takes into account, in addition to the operator’s profit, factors such as public spending, user surpluses and environmental impact. Many factors can affect both these objective functions differently, in particular infrastructure pricing, which is in principle not the same depending on whether it optimises the operator’s profits or social welfare. The questions raised by these renewed arrangements between the public sphere and private partners have mainly concerned one of the most fertile fields of recent decades, i.e. the theory of incentives. The studies in this field have focused most especially on the specific nature of a partnership contract and thus the principal/agent relationship, following the ground-breaking work of Jean-Jacques Lafont and Jean Tirolles (1993). Many particularly useful articles on PPPs, including the most recent ones, have continued work within this theoretical tradition (such as Desrieux, 2006 and Hart, 2003). However, little work has been done on the contributions and changes to the public economy implied by this new development. In the specific case of France, a second event renewed the problem of evaluation, and was triggered by the conclusions of the Working Group of the French Planning Authority chaired by Daniel Lebègue (Commissariat General du Plan, 2005). Its mission was to think about the relevant value of what is conventionally known in France as “the discount rate of the Plan”, which had been set at 8% for some twenty years. In addition to the strong theoretical reasons supporting a lower rate (Gollier, 2002), the fact of the matter is that this 8% rate was ill suited to taking environmental externalities into account effectively in the economic calculation, since it resulted in giving a very low weighting to the distant future. For example, a value considered over a 30 year time horizon is virtually divided by 10 if it is discounted at an 8% rate. It is only divided by roughly three with a discount rate reduced to 4%, i.e. the rate that was recommended by the Lebègue Report2 and that was used in official instructions (Ministry for the Environment, 2005). In this way, France aligned itself more closely with the rates used in EU countries, such as 3% in Germany. However, this recommendation had the effect of multiplying the number of new projects considered to be cost-effective, since their net present value (NPV) now became positive if their socio-economic internal rate of return (IRR) fell between 4% and the former rate of 8%. It also generated a growing number of “potential” projects, i.e. for which the optimal implementation date had already passed since their immediate rate of return was higher than the official discount rate. This made it more urgent to rank the potential projects and programme them in an order that would maximise the welfare function. This optimisation not only implies the order of implementation of projects, but also the subsidies that each of them may require and, therefore, the constraint in terms of available public-funding. The aim of this paper is to point out some recent results on this optimisation subject to a public-funding constraint and to formalise the role of pricing when these projects involve a public–private partnership or, more generally, joint financing by users and taxpayers.

To flesh out what we have just seen with some figures and identify some orders of magnitude in a practical case-study, we shall use reference data from the SIMCALECO model developed at the LET (Chevasson, 2007) to test all the implications for the economic calculation of trade-offs used in the official evaluation methods. This model reconstitutes all the calculations laid down in the Guideline “on the economic evaluation methods used for major transport infrastructure projects” (French Ministry of Public Works, 2004) in the case of motorway projects. It gives the calculations for the values of some 140 parameters required in such evaluations, the infrastructure characteristics in a benchmark scenario being as follows: a 90 km stretch of motorway to extend an existing 110 km-long road which, prior to the motorway opening, carries 12,000 vehicles a day; the investment amounts to €400 million while the current operating cost is €200 million, giving a total discounted cost of €600 million (for C above); the initial toll is close to the average toll charged on the network franchised in 2005 (€0.066 per vehicle/km for private cars); the traffic split between road and franchised motorway is simulated with a LOGIT model. This information gives a relatively high ERR of 21%, but a low IRR of 5.1%, which assumes a subsidy of 31% of the total discounted cost to take the IRR up to 10% for the operator. These are the orders of magnitude we are looking for in our analysis, together with some numerical values for the parameters. We accordingly need to calibrate our demand function to obtain at best the traffic and revenues produced by the SIMCALECO model when the toll is varied. As the demand function is stylised in linear form, it can be suitably adjusted to the data in the benchmark scenario by selecting: View the MathML sourced0=10000millionvehicle/kilometres(inautomobilev/kmequivalents)and Turn MathJax on View the MathML sourced0/β=0.25euros(kilometretollatwhichthereisnomoretraffic). Turn MathJax on These few values suffice to draw up the theoretical figures above with orders of magnitude representing specific scenarios. Thus Fig. 4 becomes Fig. 5 below. The social welfare variation is shown with three values for the public-funding scarcity coefficient (1, 1.4 and 1.8).