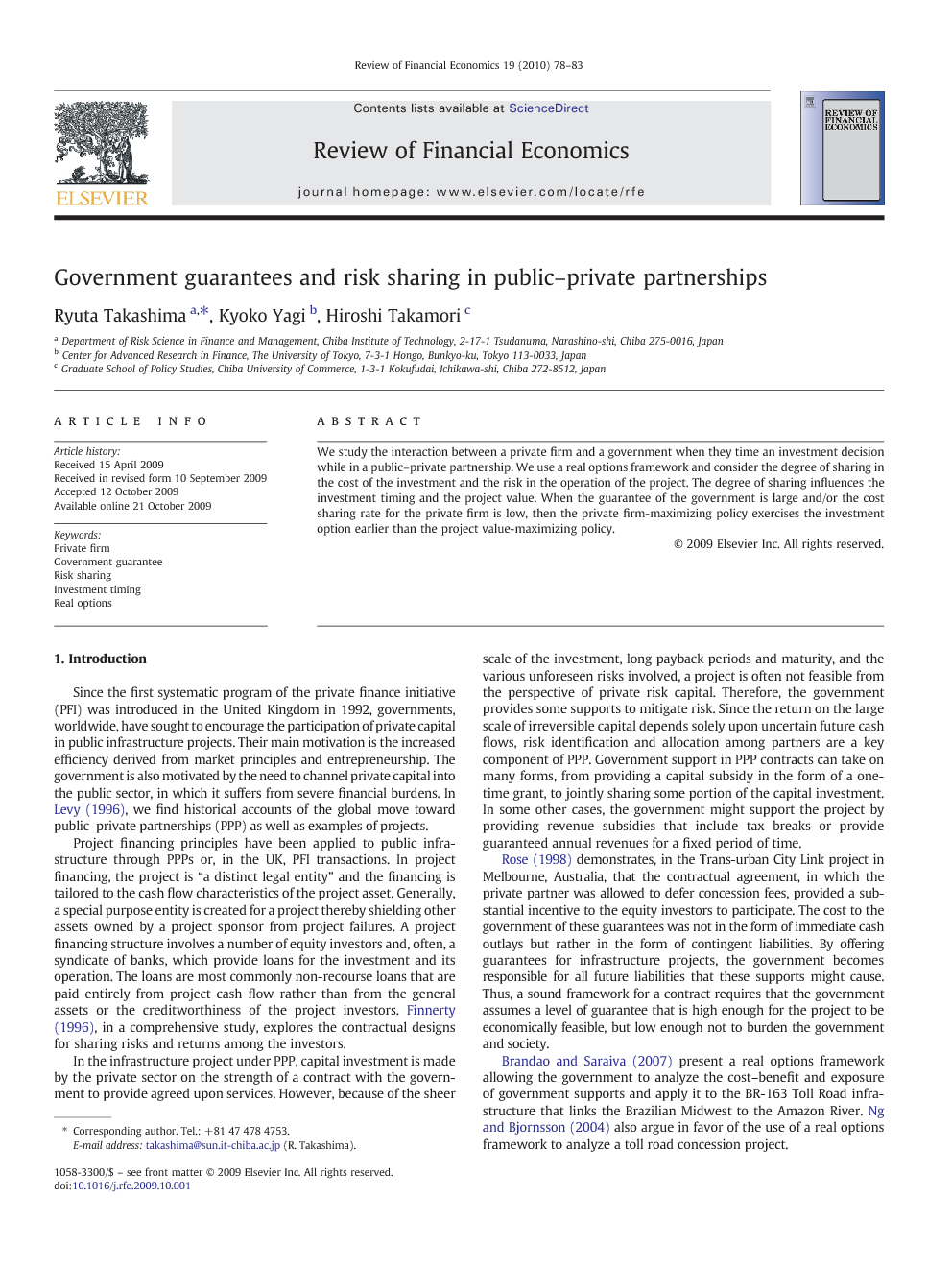 Since the first systematic program of the private finance initiative (PFI) was introduced in the United Kingdom in 1992, governments, worldwide, have sought to encourage the participation of private capital in public infrastructure projects. Their main motivation is the increased efficiency derived from market principles and entrepreneurship. The government is also motivated by the need to channel private capital into the public sector, in which it suffers from severe financial burdens. In Levy (1996), we find historical accounts of the global move toward public–private partnerships (PPP) as well as examples of projects. Project financing principles have been applied to public infrastructure through PPPs or, in the UK, PFI transactions. In project financing, the project is “a distinct legal entity” and the financing is tailored to the cash flow characteristics of the project asset. Generally, a special purpose entity is created for a project thereby shielding other assets owned by a project sponsor from project failures. A project financing structure involves a number of equity investors and, often, a syndicate of banks, which provide loans for the investment and its operation. The loans are most commonly non-recourse loans that are paid entirely from project cash flow rather than from the general assets or the creditworthiness of the project investors. Finnerty (1996), in a comprehensive study, explores the contractual designs for sharing risks and returns among the investors. In the infrastructure project under PPP, capital investment is made by the private sector on the strength of a contract with the government to provide agreed upon services. However, because of the sheer scale of the investment, long payback periods and maturity, and the various unforeseen risks involved, a project is often not feasible from the perspective of private risk capital. Therefore, the government provides some supports to mitigate risk. Since the return on the large scale of irreversible capital depends solely upon uncertain future cash flows, risk identification and allocation among partners are a key component of PPP. Government support in PPP contracts can take on many forms, from providing a capital subsidy in the form of a one-time grant, to jointly sharing some portion of the capital investment. In some other cases, the government might support the project by providing revenue subsidies that include tax breaks or provide guaranteed annual revenues for a fixed period of time. Rose (1998) demonstrates, in the Trans-urban City Link project in Melbourne, Australia, that the contractual agreement, in which the private partner was allowed to defer concession fees, provided a substantial incentive to the equity investors to participate. The cost to the government of these guarantees was not in the form of immediate cash outlays but rather in the form of contingent liabilities. By offering guarantees for infrastructure projects, the government becomes responsible for all future liabilities that these supports might cause. Thus, a sound framework for a contract requires that the government assumes a level of guarantee that is high enough for the project to be economically feasible, but low enough not to burden the government and society. Brandao and Saraiva (2007) present a real options framework allowing the government to analyze the cost–benefit and exposure of government supports and apply it to the BR-163 Toll Road infrastructure that links the Brazilian Midwest to the Amazon River. Ng and Bjornsson (2004) also argue in favor of the use of a real options framework to analyze a toll road concession project. This study applies a real options framework such as Dixit and Pindyck, 1994 and Trigeorgis, 1996, and capital structure models such as Leland (1994) to the project that is analyzed in this paper. Recently, there is a growing body of literature that analyzes the relation between investment and financing decisions of the firms in a real options framework, such as Lyandres and Zhdanov, 2006, Mauer and Ott, 2000, Mauer and Sarkar, 2005 and Sundaresan and Wang, 2007. In this paper we use the framework in these studies to model the risk sharing between a private firm and a government. In this paper, we investigate how contractual arrangements effect the positions of the main partners in a project: the private investors and the government. We aim at formulating a model to facilitate the design of a contract that is attractive to private investors with an equitable cost for government guarantees. The remainder of this paper is organized as follows. Section 2 presents our model for the project finance investment that takes into account cost and risk sharing between the private firm and the government. In Section 3, we derive two investment policies. Section 4 provides the numerical analysis of the investment threshold and the project value. Finally, Section 5 concludes the paper.