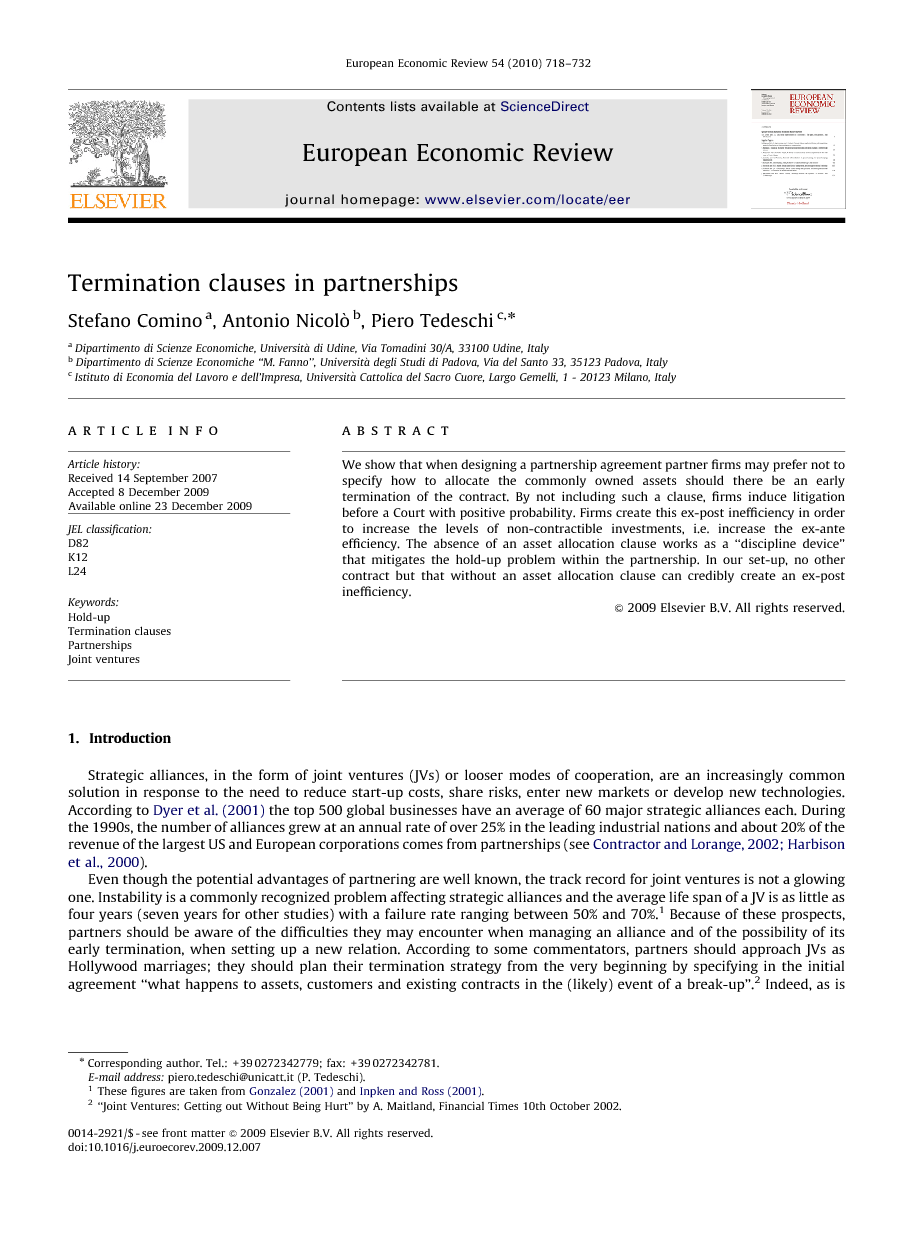 We show that when designing a partnership agreement partner firms may prefer not to specify how to allocate the commonly owned assets should there be an early termination of the contract. By not including such a clause, firms induce litigation before a Court with positive probability. Firms create this ex-post inefficiency in order to increase the levels of non-contractible investments, i.e. increase the ex-ante efficiency. The absence of an asset allocation clause works as a “discipline device” that mitigates the hold-up problem within the partnership. In our set-up, no other contract but that without an asset allocation clause can credibly create an ex-post inefficiency.

The model we have presented shows that when forming a partnership firms may prefer not to specify how to allocate the commonly owned assets in case of an early termination of the alliance. The absence of such an allocation provision induces partners to litigate before a Court with positive probability. This ex-post inefficiency is beneficial for the partners since it works as a “discipline device” that alleviates the hold-up problem: in equilibrium partner firms select larger levels of non-contractible investment in order to reduce the probability of litigation. Relatively few empirical studies focus specifically on partnership termination clauses.27 However, some indirect evidence supporting our results can be found in the empirical literature on the governance form of strategic alliances and in those studies that analyze the rationales to form partnerships rather than maintaining arm's length relationships. The trade-off addressed in our paper closely resembles the classical “commitment vs. flexibility dilemma” that characterizes the choice of the governance form of partnerships. In the literature it is argued that by devoting substantial resources, i.e. by committing, firms reduce their advantages of behaving opportunistically thus increasing the stability of the alliance. Commitment can be achieved in different ways. Equity alliances are considered to require greater levels of financial as well as organizational commitment than non-equity ones. The exchange of “mutual hostages” is another way to increase commitment: by bringing critical assets (the hostages) to the partnership, parties become more vulnerable and therefore less prone to behave in an opportunistic manner.28 A rather robust finding of the empirical literature is that when R&D activities are on the agenda of the partnership commitment is a superior strategy. In fact, in this case partners’ contributions are more likely to be non-contractible, and therefore partners find it profitable to select a commitment strategy in order to lessen the hold-up problem (see, for instance, Gulati, 1995, Pisano, 1989, Oxley, 1997 and Gulati and Singh, 1998). The results in our paper are in line with this finding. A contract without an asset allocation clause makes the partnership costlier to dissolve and therefore it represents an alternative way in which firms may commit to the alliance. As we have shown in the paper, partners might benefit from such a contract provided that investments are non-contractible; a condition more likely to hold in case of R&D partnership, as stressed by the studies quoted above. Moreover in Corollary 2 we have pointed out that the set of parameters for which the absence of a termination clause is beneficial increases in the difference (φH−φL)(φH−φL) of the intermediate asset value. Again, this difference (more in general the support of the probability distribution over the asset's values) is likely to be larger in case of R&D partnership where the intermediate asset is often intangible. Finally, the empirical literature also stresses that the presence of resource complementarities induces firms to select business strategies that require larger levels of commitment (see Harrison et al., 2001). Also in our framework complementarities increase the benefits from signing the contract without asset allocation clause. Suppose for instance that the probability function takes the form p(k1,k2)=min{η(k1+k2+τk1k2),1}p(k1,k2)=min{η(k1+k2+τk1k2),1}, with parameter ττ measuring the level of complementarities. It is possible to show that as ττ enlarges then the set of parameters for which the contract without asset allocation clause is preferred gets larger. We have proven this result in a previous version of the paper, see Comino et al. (2006).