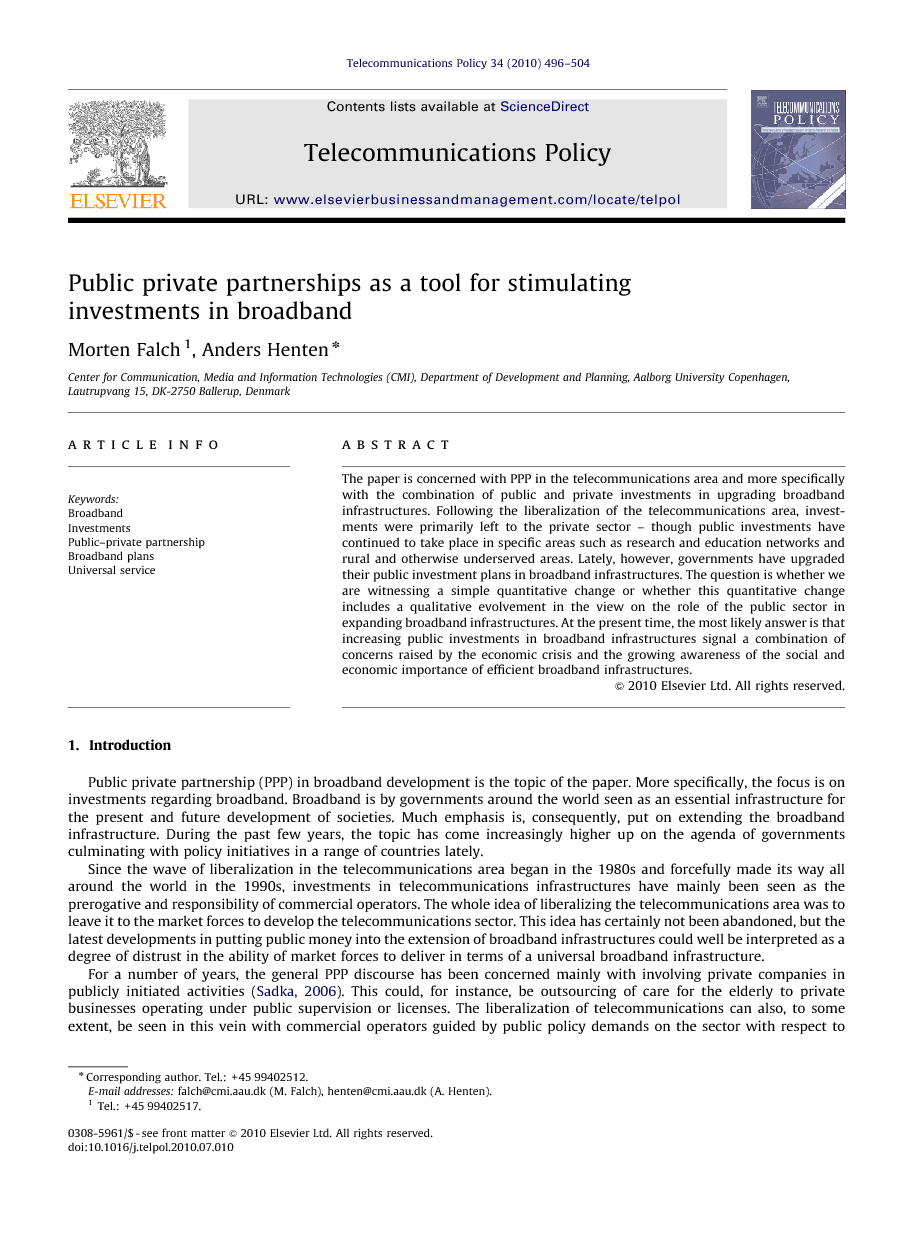 Public private partnership (PPP) in broadband development is the topic of the paper. More specifically, the focus is on investments regarding broadband. Broadband is by governments around the world seen as an essential infrastructure for the present and future development of societies. Much emphasis is, consequently, put on extending the broadband infrastructure. During the past few years, the topic has come increasingly higher up on the agenda of governments culminating with policy initiatives in a range of countries lately. Since the wave of liberalization in the telecommunications area began in the 1980s and forcefully made its way all around the world in the 1990s, investments in telecommunications infrastructures have mainly been seen as the prerogative and responsibility of commercial operators. The whole idea of liberalizing the telecommunications area was to leave it to the market forces to develop the telecommunications sector. This idea has certainly not been abandoned, but the latest developments in putting public money into the extension of broadband infrastructures could well be interpreted as a degree of distrust in the ability of market forces to deliver in terms of a universal broadband infrastructure. For a number of years, the general PPP discourse has been concerned mainly with involving private companies in publicly initiated activities (Sadka, 2006). This could, for instance, be outsourcing of care for the elderly to private businesses operating under public supervision or licenses. The liberalization of telecommunications can also, to some extent, be seen in this vein with commercial operators guided by public policy demands on the sector with respect to universal service requirements and other kinds of regulations. However, the present discourse on PPP in the telecommunications area is turning the other way round. Now, the issue is the involvement of public money in building out the broadband infrastructure in a sector which, to a large extent, has become privatized. The main reason is that a universal broadband infrastructure is seen as a means not only to enhance service provision to the citizens and to improve communications among people in general but also to improve the productivity of other economic sectors and the efficiency of the public sector. Furthermore, a degree of urgency has entered the matter. Governments see broadband as a competitive tool in order to attract international businesses and to position their country in the hierarchy of countries internationally. In this competitive situation, the sentiment is apparently that the private sector is not moving ahead fast enough. In addition, there is the issue of remote and difficult to reach areas where it may not be profitable for commercial operators to build broadband connectivity. This type of issue has generally been dealt with by means of universal service policies. However, universal service policies are mostly related to telephony services. This applies, for instance, to the European Union (EU) where the EU policies in the area deal with telephony and telephone networks. The extension of universal service requirements to broadband has indeed been discussed for some time but has until now been rejected as a general policy. Instead, the promotion of broadband in the EU has been made part of the Lisbon process including policy measures for advancing broadband deployment and penetration (Falch & Henten, 2008). Such policy measures are not only related to the broadband infrastructure (core and access network). They are also related to applications, services and content such as e-health and e-learning, which are promoted by the EU Commission (EU, 2007). In order to develop the use of broadband, the infrastructure side as well as the applications, services and content aspects are in need of attention. They complement each other in the sense that capacity requiring applications raise demands on the infrastructure and that increased capacity will contribute to stimulate the development of ‘heavy’ applications. Attention has continuously been shifting back and forth and in the present broadband surge around the world some countries put more emphasis on the infrastructure side and others on the applications, services and content side. Since the liberalization of the sector began there have been different initiatives with public investments in broadband infrastructures. This applies, for example, to research and education networks and it applies to local initiatives with city networks or networks in rural areas. The new trend is that governments have increasingly started on initiatives to fund broadband infrastructures. This applies, first and foremost, to Australia and Korea, but it also, for instance, goes for the Obama administration in the US and the latest EU initiatives in the area. As the financial crisis developed into a general economic crisis, governments have considered public investments as a way to curb the downturn (Reding, 2009). Investments in all kinds of infrastructures are high on the agenda in this regard – telecommunications being one of them. The question is whether this is just a quantitative change or whether it also signals a qualitative change in the general policy for the development of telecommunications infrastructures. To examine this issue, the paper first includes a section on the PPP concept. Thereafter, the paper examines a selection of the latest larger scale types of PPP in the broadband area. Finally, conclusions are drawn.

This paper is concerned with PPP in the telecommunications area and more specifically with the combination of public and private investments in upgrading broadband infrastructures. Following the liberalization of the telecommunications area, investment was primarily left to the private sector – though public investments have continued to take place in specific areas such as research and education networks and rural and otherwise underserved areas. Lately, however, governments have upgraded their public investment plans in broadband infrastructures. The question is whether we are witnessing a simple quantitative change or whether this quantitative change includes a qualitative evolvement in the view on the role of the public sector in expanding broadband infrastructures. The paper, first, examined the PPP concept as such. While the PPP discourse generally has been preoccupied with private companies taking over and cooperating with public organizations in the delivery of services to citizens, the present PPP discourse in the telecommunications area clearly turns the other way round. This is, for instance, obvious in the Australian case where the plan is to establish a company with majority public ownership to build a new broadband network but later to sell the publicly owned shares to private investors, i.e. a reverse BOT arrangement. In the following section, different national and EU initiatives to expand broadband were examined. Broadband has for a number of years been seen by governments as an essential infrastructure for societies in the ‘information age’. The new development taking shape during the past couple of years is the sense of urgency, which has entered the issue and the additional funds allocated for broadband expansion. The immediate reason for this development is the international economic crisis and the need for creating new jobs. More importantly, however, is the struggle for obtaining or maintaining as high as possible a position in the international economic hierarchy. Broadband is seen as crucial in this context. Many different policy instruments are used in this endeavour including initiatives to boost demand and support supply and to stimulate infrastructure as well as applications, services and content development. As the presentation of the actual policy initiatives in the different countries shows, these kinds of initiatives are used in a variety of blends and combinations. An important issue in this respect is the emphasis on infrastructure building vs. use and applications, services and content development. While public authorities have tended to stay away as much as possible from infrastructure building, support for the ‘softer’ initiatives such as improving user skills and funding application, service and content development has been seen as more legitimate. The new trend that has come about with the latest broadband initiatives is the greater emphasis given to infrastructure projects. Two major types of policy initiatives stand out in this context, namely economic support for infrastructure extension and universal service policies. While universal service policies have been applied regarding telephony in the first phases of the liberalization of telecommunications, governments have been more hesitant with respect to implementing universal service policies for broadband. In Korea, this was, however, the case when the incumbent operator KT was liberalized. In Europe, this has also been discussed for some years, but has not yet resulted in any general universal service initiative in the area. In the US, the FCC now suggests the transfer of universal service funds to the broadband area. The most important type of development is that public money (state aid) is allocated for extending broadband infrastructures. This does not constitute an entirely new trend as public money, at a lower scale for a number of years, has been used for broadband projects. But there is a considerable increase in the funds allocated, of which Australia presently is the most visible example, though other countries are also increasing their investments. This can be interpreted as a degree of mistrust in private investments catering to the importance of broadband extension, and this is what could be signalling a qualitatively new development in the view of the distribution of roles between private and public organizations in broadband-based communications. However, at the present stage, the most likely conclusion is that increasing public investments in broadband infrastructures signal a combination of the concerns raised by the economic crisis and the growing awareness of the importance of efficient broadband infrastructures for the general economic and social development.