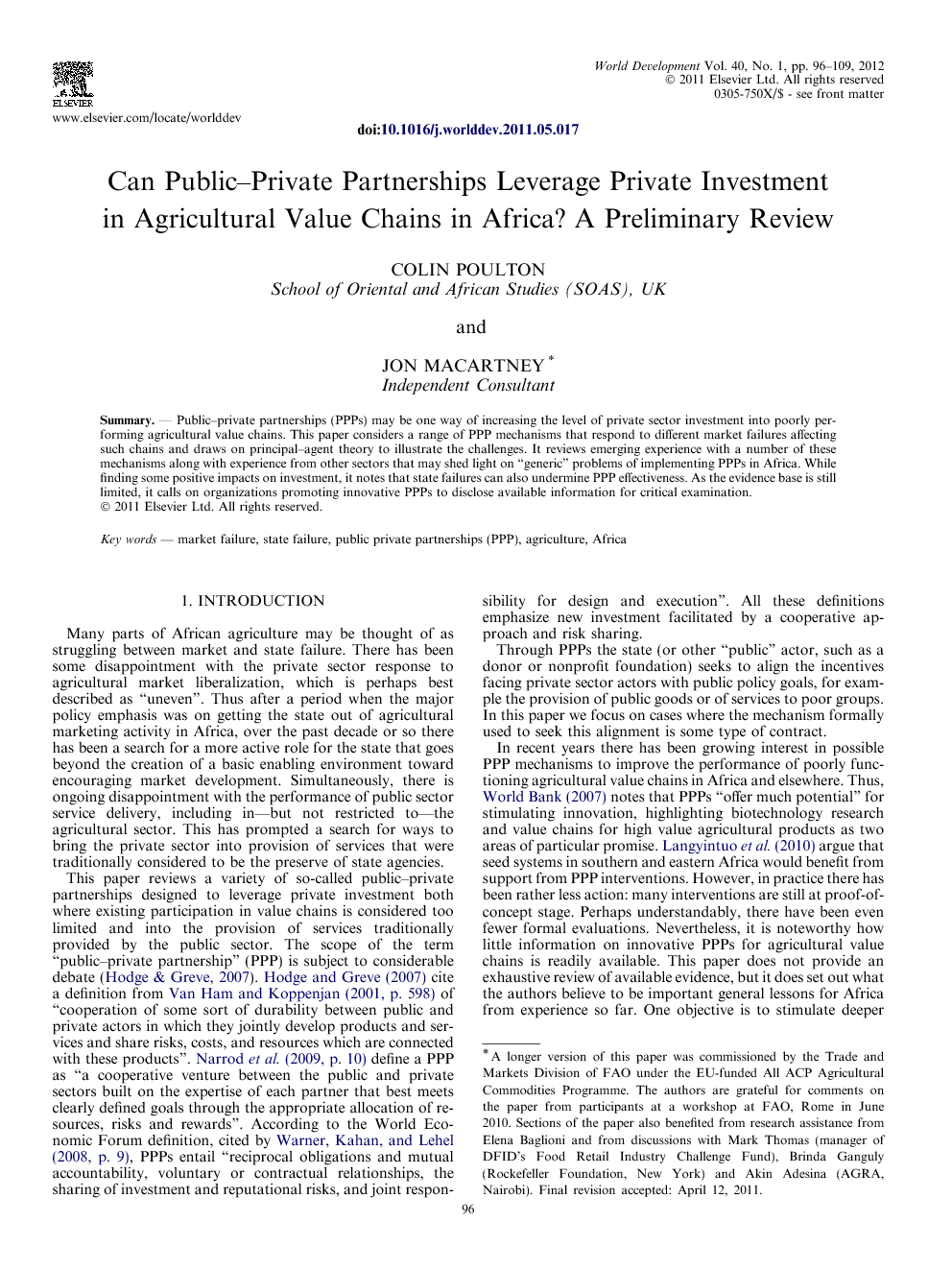 Public–private partnerships (PPPs) may be one way of increasing the level of private sector investment into poorly performing agricultural value chains. This paper considers a range of PPP mechanisms that respond to different market failures affecting such chains and draws on principal–agent theory to illustrate the challenges. It reviews emerging experience with a number of these mechanisms along with experience from other sectors that may shed light on “generic” problems of implementing PPPs in Africa. While finding some positive impacts on investment, it notes that state failures can also undermine PPP effectiveness. As the evidence base is still limited, it calls on organizations promoting innovative PPPs to disclose available information for critical examination.

Many parts of African agriculture may be thought of as struggling between market and state failure. There has been some disappointment with the private sector response to agricultural market liberalization, which is perhaps best described as “uneven”. Thus after a period when the major policy emphasis was on getting the state out of agricultural marketing activity in Africa, over the past decade or so there has been a search for a more active role for the state that goes beyond the creation of a basic enabling environment toward encouraging market development. Simultaneously, there is ongoing disappointment with the performance of public sector service delivery, including in—but not restricted to—the agricultural sector. This has prompted a search for ways to bring the private sector into provision of services that were traditionally considered to be the preserve of state agencies. This paper reviews a variety of so-called public–private partnerships designed to leverage private investment both where existing participation in value chains is considered too limited and into the provision of services traditionally provided by the public sector. The scope of the term “public–private partnership” (PPP) is subject to considerable debate (Hodge & Greve, 2007). Hodge and Greve (2007) cite a definition from Van Ham and Koppenjan (2001, p. 598) of “cooperation of some sort of durability between public and private actors in which they jointly develop products and services and share risks, costs, and resources which are connected with these products”. Narrod et al. (2009, p. 10) define a PPP as “a cooperative venture between the public and private sectors built on the expertise of each partner that best meets clearly defined goals through the appropriate allocation of resources, risks and rewards”. According to the World Economic Forum definition, cited by Warner, Kahan, and Lehel (2008, p. 9), PPPs entail “reciprocal obligations and mutual accountability, voluntary or contractual relationships, the sharing of investment and reputational risks, and joint responsibility for design and execution”. All these definitions emphasize new investment facilitated by a cooperative approach and risk sharing. Through PPPs the state (or other “public” actor, such as a donor or nonprofit foundation) seeks to align the incentives facing private sector actors with public policy goals, for example the provision of public goods or of services to poor groups. In this paper we focus on cases where the mechanism formally used to seek this alignment is some type of contract. In recent years there has been growing interest in possible PPP mechanisms to improve the performance of poorly functioning agricultural value chains in Africa and elsewhere. Thus, World Bank (2007) notes that PPPs “offer much potential” for stimulating innovation, highlighting biotechnology research and value chains for high value agricultural products as two areas of particular promise. Langyintuo et al. (2010) argue that seed systems in southern and eastern Africa would benefit from support from PPP interventions. However, in practice there has been rather less action: many interventions are still at proof-of-concept stage. Perhaps understandably, there have been even fewer formal evaluations. Nevertheless, it is noteworthy how little information on innovative PPPs for agricultural value chains is readily available. This paper does not provide an exhaustive review of available evidence, but it does set out what the authors believe to be important general lessons for Africa from experience so far. One objective is to stimulate deeper debate on the potential of PPPs in the hope of bringing information currently buried in gray literature out into the full public arena. In this paper some reference is made to PPPs in agricultural value chains in other continents, but experience with PPPs in agricultural value chains in Africa is also compared with experience within nonagricultural sectors in Africa. Much of the literature here is quite critical of PPPs in practice and sometimes also as a concept (foisted by donors on unconvinced governments for ideological reasons where privatization of state activities was not considered a viable option). Nonagricultural examples are considered relevant here because the low capacity of many African states and often ambiguous attitudes toward private sector-led development among political elites can be expected to affect public engagement with the private sector irrespective of sectoral boundaries. The paper proceeds as follows: In Section 2 reasons for the poor functioning of agricultural value chains are briefly discussed, leading to an understanding of the types of market (and associated state) failures that PPP mechanisms may be designed to address. Section 3 presents a typology of PPP mechanisms that is used to structure later sections. Section 4 draws on principal–agent theory to highlight the major design challenges facing PPP mechanisms. Sections 5, 6, 7 and 8 review experience with different mechanisms both in nonagricultural and agricultural contexts to address the following questions: • Can PPPs remove or alleviate binding constraints on private investment? • Can contractual arrangements between state and private sector actors incentivize the latter to provide supply chain services in ways that meet public policy objectives? Finally, Section 9 concludes.

The evidence base regarding the effectiveness of PPPs in leveraging private investment in poorly functioning agricultural value chains and the impact of such interventions on smallholder producers is still limited. Many of the mechanisms reviewed in this paper are “pioneering” examples: the number of cases to observe is still low. Moreover, many are still sufficiently recent that one cannot expect impact evaluations to have been conducted. On the other hand, initial evidence on their effectiveness in leveraging private investment should be available, but can be hard to come by. Insofar as evidence does exist, some mechanisms do seem to alleviate binding constraints to private investment. For example, reviews of challenge funds have tended to conclude that they encourage (or hasten) investment with high social returns, although the additionality question remains unresolved. Loan guarantees to agro-dealers have enabled them to expand the volume of their operations. However, it should be noted that these cases were pioneered by international organizations. This paper has not reviewed any cases of successful deployment of PPPs for strengthening agricultural value chains by African state agencies.14 By contrast, it has noted cases where the main constraint on greater private investment in such chains was unpredictable public policy. Even where market failures are present, current state capacity to design and administer effective PPPs may remain a constraint to private investment. This paper has argued that the general framework of performance incentives within many African state agencies is at the root of this capacity problem, which does mean that political commitment can make a difference. If so, there may be an advocacy role for AGRA, among others, in persuading African states to experiment with PPP-type arrangements for poorly functioning agricultural value chains. However, this advocacy role should be accompanied by full disclosure of available information on “pioneering” examples for critical examination.