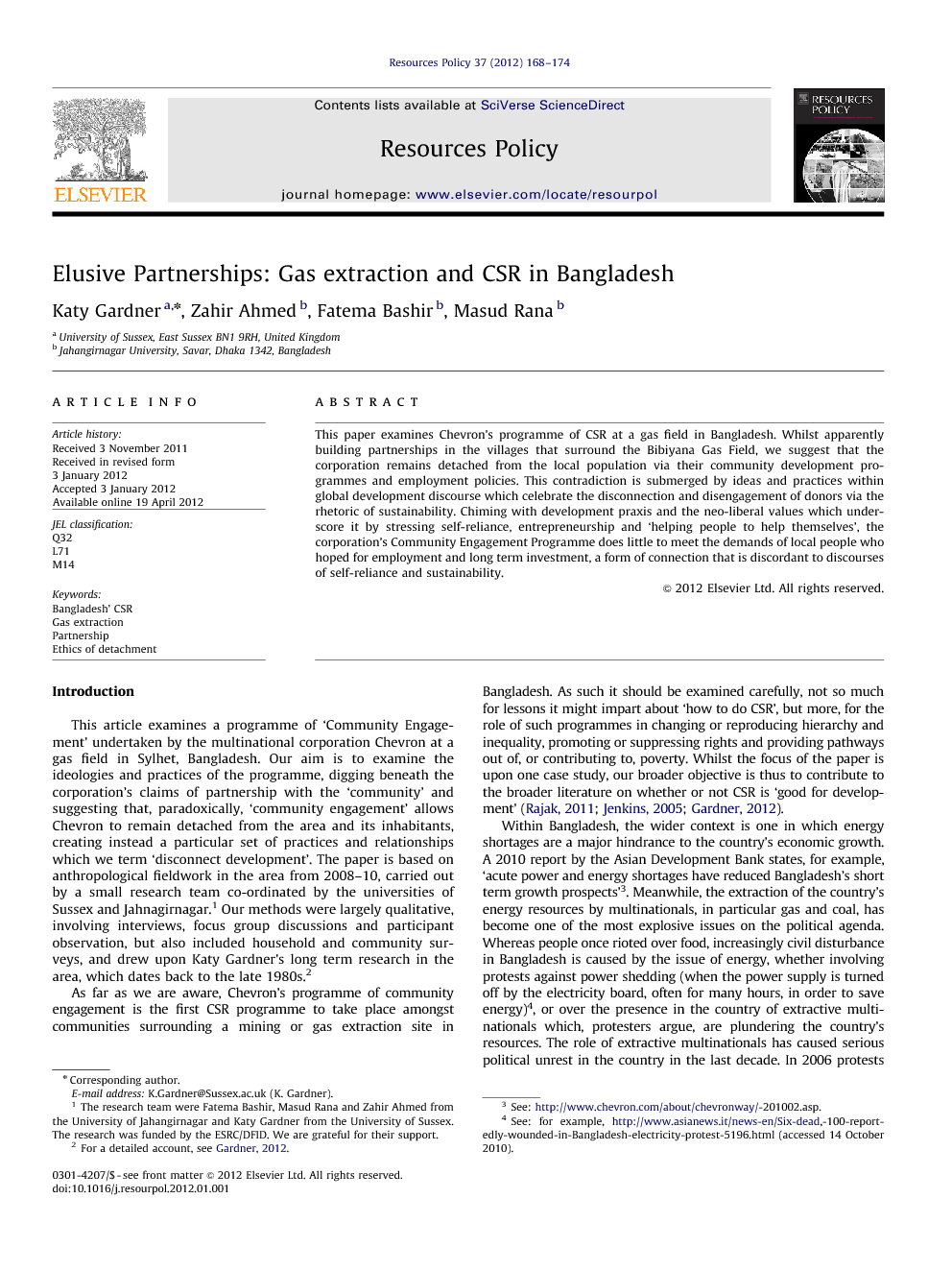 This paper examines Chevron's programme of CSR at a gas field in Bangladesh. Whilst apparently building partnerships in the villages that surround the Bibiyana Gas Field, we suggest that the corporation remains detached from the local population via their community development programmes and employment policies. This contradiction is submerged by ideas and practices within global development discourse which celebrate the disconnection and disengagement of donors via the rhetoric of sustainability. Chiming with development praxis and the neo-liberal values which underscore it by stressing self-reliance, entrepreneurship and ‘helping people to help themselves’, the corporation's Community Engagement Programme does little to meet the demands of local people who hoped for employment and long term investment, a form of connection that is discordant to discourses of self-reliance and sustainability.

This article examines a programme of ‘Community Engagement’ undertaken by the multinational corporation Chevron at a gas field in Sylhet, Bangladesh. Our aim is to examine the ideologies and practices of the programme, digging beneath the corporation's claims of partnership with the ‘community’ and suggesting that, paradoxically, ‘community engagement’ allows Chevron to remain detached from the area and its inhabitants, creating instead a particular set of practices and relationships which we term ‘disconnect development’. The paper is based on anthropological fieldwork in the area from 2008–10, carried out by a small research team co-ordinated by the universities of Sussex and Jahnagirnagar.1 Our methods were largely qualitative, involving interviews, focus group discussions and participant observation, but also included household and community surveys, and drew upon Katy Gardner's long term research in the area, which dates back to the late 1980s.2 As far as we are aware, Chevron's programme of community engagement is the first CSR programme to take place amongst communities surrounding a mining or gas extraction site in Bangladesh. As such it should be examined carefully, not so much for lessons it might impart about ‘how to do CSR’, but more, for the role of such programmes in changing or reproducing hierarchy and inequality, promoting or suppressing rights and providing pathways out of, or contributing to, poverty. Whilst the focus of the paper is upon one case study, our broader objective is thus to contribute to the broader literature on whether or not CSR is ‘good for development’ (Rajak, 2011, Jenkins, 2005 and Gardner, 2012). Within Bangladesh, the wider context is one in which energy shortages are a major hindrance to the country's economic growth. A 2010 report by the Asian Development Bank states, for example, ‘acute power and energy shortages have reduced Bangladesh's short term growth prospects’3. Meanwhile, the extraction of the country's energy resources by multinationals, in particular gas and coal, has become one of the most explosive issues on the political agenda. Whereas people once rioted over food, increasingly civil disturbance in Bangladesh is caused by the issue of energy, whether involving protests against power shedding (when the power supply is turned off by the electricity board, often for many hours, in order to save energy)4, or over the presence in the country of extractive multinationals which, protesters argue, are plundering the country's resources. The role of extractive multinationals has caused serious political unrest in the country in the last decade. In 2006 protests against a proposed open cast mine in Phulbari, in the North East, to be operated by Asia Energy, which, it was said, would leave over 20,000 displaced people, led to the death of three and injury of around a hundred when police shot into the crowd. More recently national agitation has centred around the content of Power Share Contracts with foreign companies, with the activists arguing that these exploit the country's natural resources, leading to large profits for the multinationals, generous backhanders for corrupt government officials and nothing for Bangladesh. In September 2009, for example, a rally called to protest against the leasing of rights to extract offshore gas resources to multinationals led to police violence and the injury of 30 people. At the heart of these protests is the widely held belief in Bangladesh that the state is corrupt. Those protesting at power shedding, for example, accuse electricity board officials of taking bribes, whilst disputes over multinationals revolve around the content of power share contracts, and allegations of bribery by corporations of government ministers. Rumour, counter rumour, civil unrest, accusations and arrests are the order of the day in a fragile democracy marked by lack of accountability, secret deals and limited if no transparency. It is significant that the research was carried out during a period in which the country was controlled by a caretaker government which took radical action over corruption (from 2007–08) arresting and holding in detention hundreds of politicians and business people. Recent reports from groups such as Transparency International suggest that under the new Awami League government, perceptions of corruption remain extremely high.5 The role of the Bangladeshi state and its lack of accountability therefore underscores any discussion of Extractive Industry CSR in Bangladesh. As such, our findings are probably similar to those of other research projects which examine the micropolitics of CSR in contexts where the state is weak and unaccountable (see, for example, Zalik, 2004 and Welker, 2009). As suggested at the end of the paper, besides providing employment and adding to the country's economic growth, corporations aiming at ‘socially responsible’ policies would do well to place their energies in pressing the governments they work with for greater transparency in their dealings, as well as being transparent themselves. Although Chevron is a signatory to the Extractive Industries Transparency Initiative, for example, neither the details of its deals nor the findings of its environmental or social impact assessments are made public in Bangladesh.6 Indeed, whilst the company scores 88% for ‘Organisational Disclosure’ in Transparency International/Revenue Watch's 2011 data, it scores only 8% for ‘Country led disclosure’, figures which hint at corporate double standards.

The irony of disconnect development is striking. Whilst local people are physically, culturally and economically disconnected from the gas field, Chevron must claim connection in order to promote their global reputation for ‘partnership’, so core to their ‘Vision’. Moreover, a particular praxis helps the company achieve the appearance of attachment, whilst following the corporate ethic of detachment (Cross, 2011). We term this ‘disconnect development’ because of the way that discourses of sustainability and ‘helping people to help themselves’ mitigate against the long term provision of services or assistance by donors. Instead, they promote an ideal in which via income generation, microcredit and other globally fashionable practices, the poor are able to make enough of a living to afford the health services, education and other forms of social protection that in countries such as Bangladesh the state is generally unable to provide. Whilst originally rooted in radical leftist theories of power and political change, terms such as ‘empowerment’, used liberally by Chevron executives mask the neo-liberal tenets of contemporary disconnect development: the market is the answer to poverty; the poor must ‘be helped to help themselves’, since the state obviously is not going to help them. In contrast to the development of disconnection, is the development of connection. This is what people mean when they speak of unnoti. Symbolised by connection to the gas supply (which never came about), unnoti involves progress and modernity, an end to poverty via formal employment, improved facilities, and industrialisation. Within connected development, the government would be transparent rather than corrupt, and citizens of a modern state would have the right to access information involving, for example, the deals made with multinationals. In the development of connection, extractive multinationals might have several roles, all of which involve a formalised relationship between the company and the population surrounding the sites of extraction. This population would neither be ‘our community’ nor ‘our partners’, but ‘our hosts’. The first role is the most straightforward: corporate social responsibility must surely, at the very minimum, involve transparent grievance procedures, and an openness concerning the content of environmental and social impact assessments, and corporate profits. Secondly, where possible, corporations should prioritise local people in their employment policies. Finally, Chevron and other multinationals working in countries such as Bangladesh might play a role in supporting governments move away from the politics of informal patronage and corruption towards openness and transparency, placing anticorruption programmes at the centre of their CSR policies.27 None of these changes needs to involve patronage, or taking over the role of the state; what they do require, however, is a process in which rather than aiding disconnect development, the development of connection is encouraged.