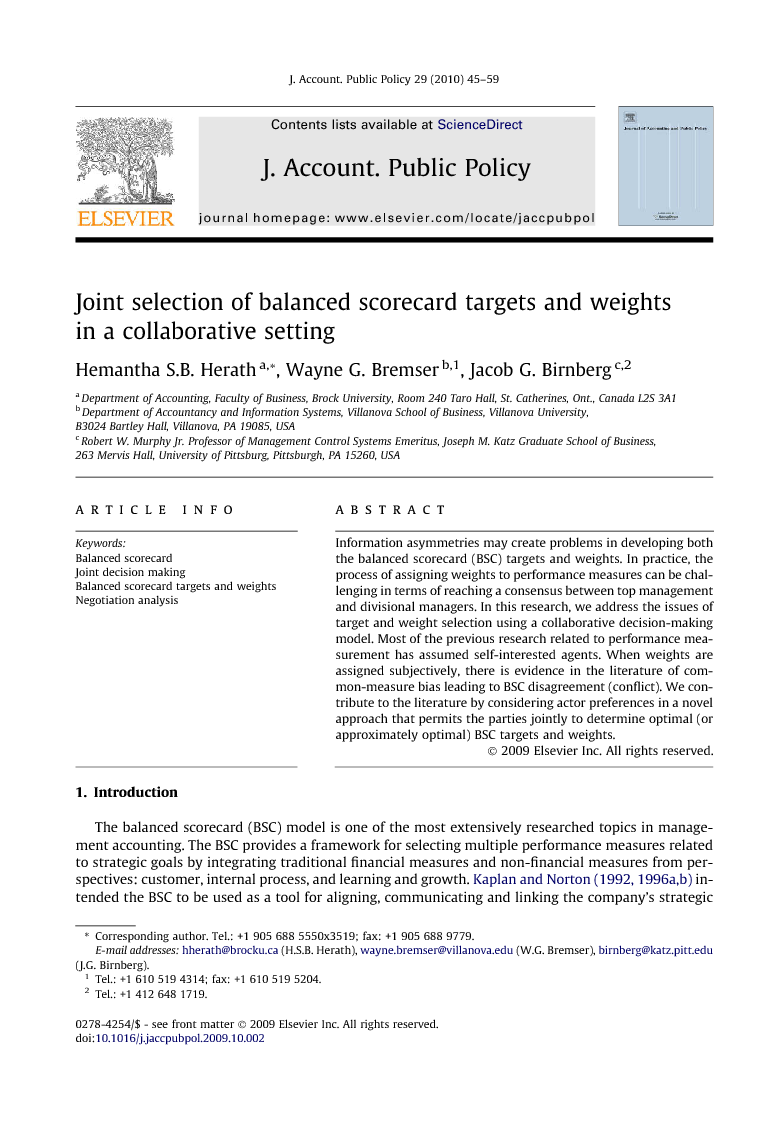 Information asymmetries may create problems in developing both the balanced scorecard (BSC) targets and weights. In practice, the process of assigning weights to performance measures can be challenging in terms of reaching a consensus between top management and divisional managers. In this research, we address the issues of target and weight selection using a collaborative decision-making model. Most of the previous research related to performance measurement has assumed self-interested agents. When weights are assigned subjectively, there is evidence in the literature of common-measure bias leading to BSC disagreement (conflict). We contribute to the literature by considering actor preferences in a novel approach that permits the parties jointly to determine optimal (or approximately optimal) BSC targets and weights.

The balanced scorecard (BSC) model is one of the most extensively researched topics in management accounting. The BSC provides a framework for selecting multiple performance measures related to strategic goals by integrating traditional financial measures and non-financial measures from perspectives: customer, internal process, and learning and growth. Kaplan and Norton, 1992, Kaplan and Norton, 1996a and Kaplan and Norton, 1996b intended the BSC to be used as a tool for aligning, communicating and linking the company’s strategic goals to managers’ incentive compensation. An essential BSC concept is the articulation of hypothesized cause–effect linkages between performance measures (both financial and non-financial) and strategic objectives (Kaplan and Norton, 1993 and Banker et al., 2001). Prior literature has considered issues related to the use of BSC measures in evaluating managers (Ittner and Larcker, 1998, Lipe and Salterio, 2000, Ittner et al., 2003 and Libby et al., 2004). Important issue raised in the literature are (i) the bias towards common (financial) measures and (ii) that causal linkages between driver and outcome measures are often overlooked (Lipe and Salterio, 2000, Malina and Selto, 2001 and Banker et al., 2004). In a recent study, Wong-On-Wing et al. (2007) found that top management have a bias towards common measures and a tendency to overlook the validity of that causal linkages between driver and outcome measures of a BSC. This leads to disagreement (conflict) between top management and divisional managers. Although, Kaplan and Norton, 1992, Kaplan and Norton, 1996a and Kaplan and Norton, 1996b suggest that compensation should be tied to the BSC, they do not provide clear guidance on setting targets and assigning weights to each target. Since a scorecard-linked compensation system’s effectiveness relies heavily on the targets and weights, consensus over causal linkages is important in implementing a truly successful BSC system. However, in practice, reaching a consensus on what weight and the target to assign to each performance measure can be challenging. It therefore is surprising that the issue of fairness (equity) with respect to both the BSC process and outcomes resulting from disagreements also have not been researched adequately in the literature. In this article, we attempt to address these important gaps in the literature. We present a method for assigning weights to measures and selecting targets using a collaborative decision-making approach. More specifically, we draw upon the negotiation analysis literature to develop a BSC model to find an optimal (or approximately optimal) set of targets and weights that are expected to increase the joint value to parties with diverse preferences (signals). We contribute to the literature in the following ways: • We provide an analytical method for the joint selection of BSC targets and weights facilitating consensus building among the parties. • Our approach is new to the BSC literature in the sense that it departs from self-interested behavior to cooperative behavior. • Our method encourages greater participation through joint decision making and an environment that facilitates information sharing, thereby reducing information asymmetry and increasing perceived equity (fairness) in the BSC process. The paper consists of six sections. Section 2 provides the motivation; Section 3 reviews the relevant literature; Section 4 provides the mathematical programming models for the joint (two-party) BSC target and weight selection problem; Section 5 provides a numerical example, and the final section discusses managerial implications, limitations and future research.

In this article, we have developed a novel participative approach to the joint selection of BSC targets and weights. This collaborative decision-making approach can be compared to agency models that focus on competitive behavior. The joint decision approach illustrated in the model avoids the extreme posturing of a competitive environment and offers a starting point for discussing the problem from a more collaborative perspective that encourages the parties to arrive at consensus regarding targets and weights. The model takes into consideration the preferences of the two parties and jointly determines the optimal (or approximately optimal) set of BSC targets and weights that will increase the joint values for the two parties. When the FOTE assumption holds for an organization and diverse preferences exist, collaboration, instead of conflict, increases the total value to the firm (Raiffa et al., 2002). These joint values should also be viewed as optimal to the firm since there is goal congruence. We cited the findings of Bouillon et al., 2006, Rowe, 2004, Rowe et al., 2008, LaPorta et al., 1997 and Casadesus-Masanell, 2004 as suggesting certain settings where managers tend to be open and truthful. Our model requires that the managers involved in the negotiation process make a commitment to FOTE. Negotiation analysis models for the simultaneous selection of optimal targets and weights have not been previously investigated in the BSC literature. The Analytic Hierarchical Process (AHP) is another approach that helps individuals and groups arrive at decisions by incorporating preferences. AHP is a multi-objective, multi-criterion, decision-making approach. Applications of AHP, including more recent suggestions in the area of information security, can be found in Bodin et al., 2005, Bodin and Gass, 2003 and Saaty, 1980 and others. AHP has also been applied to the BSC (e.g., Chan and Lynn, 1991 and Liberatore et al., 1997). Although weights are used for indicating party preferences in both AHP and the proposed model, the two approaches are different. A set of joint optimal targets and weights are simultaneously determined in our proposed model. AHP offers a systematic approach to weigh multiple measures and combine the judgments of different group members, and thereby obtain a representative judgment for the group. In AHP it is shown that the geometric mean satisfies the reciprocal condition in combining the judgments. The proposed model for setting BSC targets and weights has several limitations. The model assumes that the parties have agreed upon the strategic objectives, performance measures and hypothesized cause–effect linkages; and they are open and truthful, which restricts our model’s scope of use to organizations where it is a reasonable assumption. Future research could relax the FOTE assumption and consider a Partial, Open, Truthful Exchange (POTE) setting, where the two parties withhold some information, thereby extending the BSC model to another set of organizations. Another limitation of the proposed model is that it ignores the behavioral and political factors that may influence the target and weight selection. Future research could modify the BSC model for behavioral variables and conduct behavioral experiments. The proposed BSC model is a deterministic model with no feedback mechanism. Future research could investigate how to incorporate uncertainty and learning in a dynamic BSC model. Despite the above limitations, the proposed model addresses several issues raised in the literature. Common-measure bias, BSC conflict resolution (Wong-On-Wing et al., 2007) and the improved reliability of data (Libby et al., 2004) is addressed by considering the preferences of divisional managers who have more information on operational activities and constraints. Banker et al. (2004) suggest that managers with detailed knowledge of strategic linkages will rely on linked performance measures. The negotiation model encourages more communication and leads to a better knowledge of strategically linked targets and their feasibility. Ittner et al. (2003) identify implementation issues such as fairness and equity in BSC bonus systems. The collaborative approach focuses on the importance of shared values and responsibility and entails a fair BSC target and weight setting process