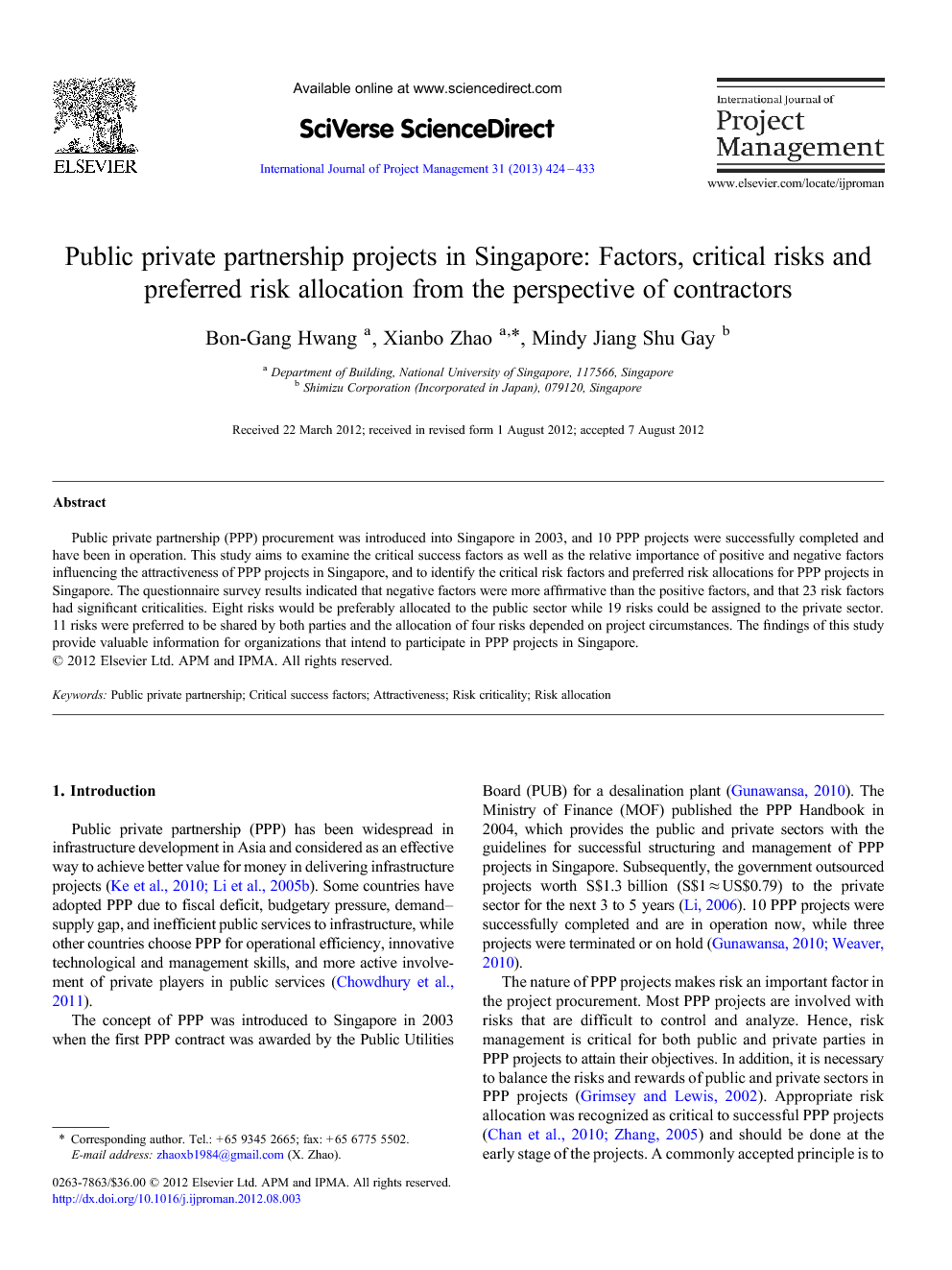 Public private partnership (PPP) procurement was introduced into Singapore in 2003, and 10 PPP projects were successfully completed and have been in operation. This study aims to examine the critical success factors as well as the relative importance of positive and negative factors influencing the attractiveness of PPP projects in Singapore, and to identify the critical risk factors and preferred risk allocations for PPP projects in Singapore. The questionnaire survey results indicated that negative factors were more affirmative than the positive factors, and that 23 risk factors had significant criticalities. Eight risks would be preferably allocated to the public sector while 19 risks could be assigned to the private sector. 11 risks were preferred to be shared by both parties and the allocation of four risks depended on project circumstances. The findings of this study provide valuable information for organizations that intend to participate in PPP projects in Singapore.

Public private partnership (PPP) has been widespread in infrastructure development in Asia and considered as an effective way to achieve better value for money in delivering infrastructure projects (Ke et al., 2010 and Li et al., 2005b). Some countries have adopted PPP due to fiscal deficit, budgetary pressure, demand–supply gap, and inefficient public services to infrastructure, while other countries choose PPP for operational efficiency, innovative technological and management skills, and more active involvement of private players in public services (Chowdhury et al., 2011). The concept of PPP was introduced to Singapore in 2003 when the first PPP contract was awarded by the Public Utilities Board (PUB) for a desalination plant (Gunawansa, 2010). The Ministry of Finance (MOF) published the PPP Handbook in 2004, which provides the public and private sectors with the guidelines for successful structuring and management of PPP projects in Singapore. Subsequently, the government outsourced projects worth S$1.3 billion (S$1 ≈ US$0.79) to the private sector for the next 3 to 5 years (Li, 2006). 10 PPP projects were successfully completed and are in operation now, while three projects were terminated or on hold (Gunawansa, 2010 and Weaver, 2010). The nature of PPP projects makes risk an important factor in the project procurement. Most PPP projects are involved with risks that are difficult to control and analyze. Hence, risk management is critical for both public and private parties in PPP projects to attain their objectives. In addition, it is necessary to balance the risks and rewards of public and private sectors in PPP projects (Grimsey and Lewis, 2002). Appropriate risk allocation was recognized as critical to successful PPP projects (Chan et al., 2010 and Zhang, 2005) and should be done at the early stage of the projects. A commonly accepted principle is to allocate risks to the party best able to manage it at least cost (EC, 2003). The objectives of this study are (1) to examine the critical success factors (CSFs) as well as the relative importance of positive and negative factors that influence the attractiveness of PPP projects in Singapore; and (2) to identify the critical risk factors and preferred risk allocations in PPP projects in Singapore. The findings of this study help both public and private sectors to better understand the important factors for PPP projects as well as risk factors and their allocation, providing valuable information for organizations that intend to participate in PPP projects in Singapore. Following the introduction to this study, the second section provides the background information relating to PPP projects. In the third section, research methodology and a profile of the respondents are presented. Then, data concerning the CSFs for PPP projects, positive and negative factors for PPP projects, risk criticalities and risk allocation preferences are analyzed, and the results are discussed in the fourth section. Finally, the fifth section draws conclusions of this study and recommends further research.

This study examined the CSFs as well as positive and negative factors of PPP projects in Singapore and identified the critical risks and preferred risk allocation based on the inputs from construction companies in Singapore. The respondents perceived “well-organized public agency”, “appropriate risk allocation and sharing” and “strong private consortium” as the top three CSFs for PPP projects. The relative importance of positive and negative factors that influence the attractiveness of PPP projects was also identified. “Better value for money”, “improved risk profile”, and “facilitated creative, innovative and cost-effective solutions” were the top three positive factors. “Lengthy delays in negotiation”, “high participation costs”, “confusion on government objectives and criteria evaluation” and “lack of experience or appropriate skills” were recognized as the top four negative factors for PPP projects in Singapore. The survey results also indicated that the negative factors were more affirmative than the positive factors and that PPP projects were not well accepted by contractors in Singapore. Hence, the Singapore government needs to take more measures to promote PPP projects. 42 risk factors, which were identified from literature review, were ranked based on their criticalities, and 23 of them were found to have significantly high criticalities (mean scores) that ranged from 4.46 to 3.33. “Lack of support from government”, “availability of finance”, “construction time delay”, “inadequate experience in PPP”, and “unstable government” were the top five critical risk factors in PPP projects in Singapore. Risk allocation preferences were explored based on the opinions of the contractors. Seven out of the 42 risks were preferably allocated to the public sector. Six of the seven risks were concerned with political and government policies while the remaining one was the availability of the project site. In addition, 19 risks were preferred to be assigned to the private sector, which implied that the extent of transferring risks from the public sector to the private sector was relatively low compared with that in the UK. These risks were mainly natural risks, financial risks, design and construction risks, as well as operation risks. Moreover, 11 risks, which were difficult to be handled well by only one party alone, fell within the shared risk category. Five of the 11 risks were associated with the relationships between the parties of PPP projects. There were still four risks that can neither be allocated to a party nor shared by both parties. Their allocation should be negotiated based on specific project circumstances. It should be noted that there are common and geographically specific factors and risks affecting PPP projects no matter where these projects are performed. The implication of this study lies in identifying the CSFs, positive and negative factors, as well as the risk criticalities and allocation preferences, which are geographically specific to the PPP projects in Singapore. Nonetheless, the implication of this study is not limited to Singapore because the findings of this study provide valuable information for the international organizations that intend to participate in PPP projects to be performed in Singapore. Thus, this study also contributes to the knowledge body on PPP procurement in the broader global community. Further research can be focused on case studies of successful PPP projects that were completed in Singapore. This is because such case studies can help both public and private sectors learn lessons, strengthen the importance of positive factors and thus increase the attractiveness of PPP procurement. Similar studies can also be conducted to discover the current status of PPP procurement in other countries of ASEAN (Association of Southeast Asian Nations).