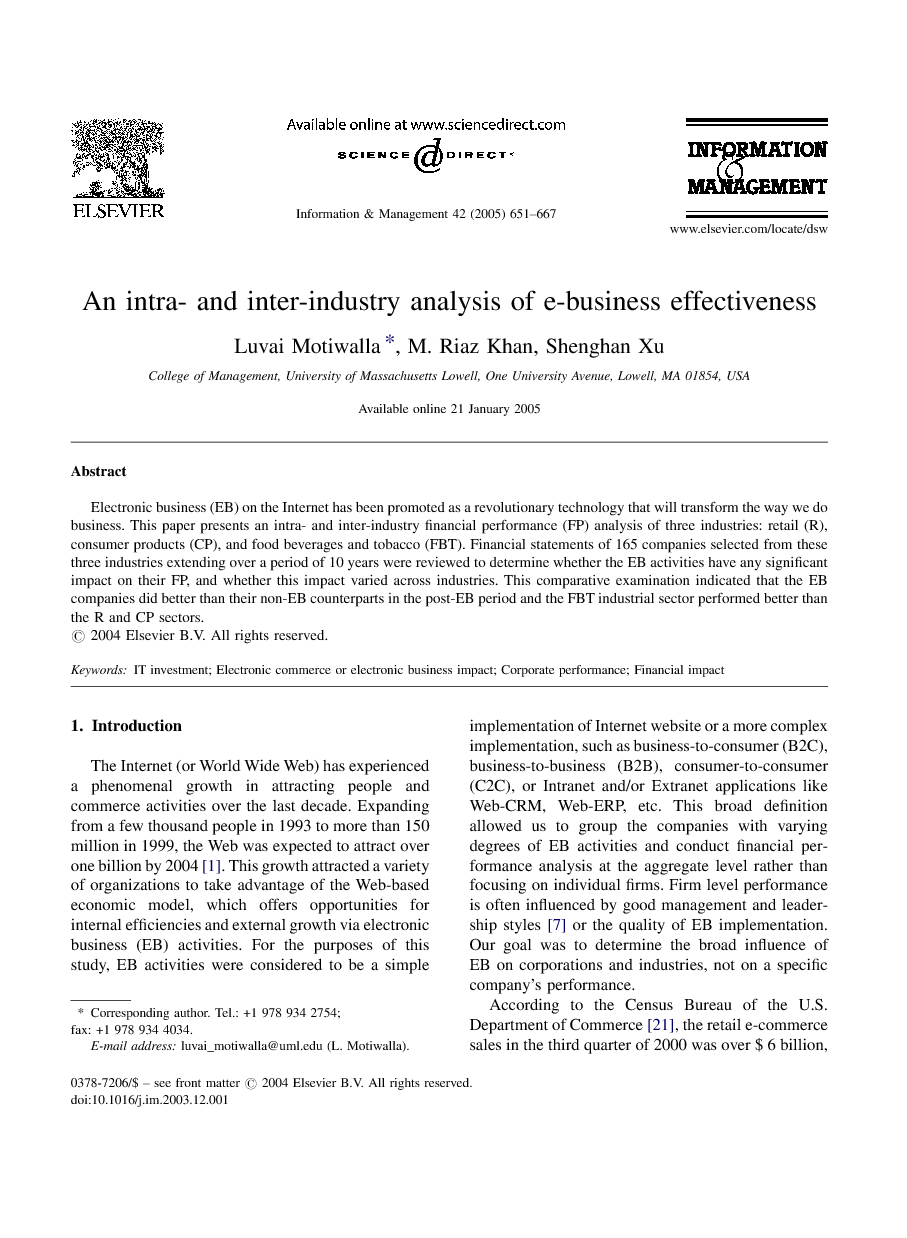 Electronic business (EB) on the Internet has been promoted as a revolutionary technology that will transform the way we do business. This paper presents an intra- and inter-industry financial performance (FP) analysis of three industries: retail (R), consumer products (CP), and food beverages and tobacco (FBT). Financial statements of 165 companies selected from these three industries extending over a period of 10 years were reviewed to determine whether the EB activities have any significant impact on their FP, and whether this impact varied across industries. This comparative examination indicated that the EB companies did better than their non-EB counterparts in the post-EB period and the FBT industrial sector performed better than the R and CP sectors

The Internet (or World Wide Web) has experienced a phenomenal growth in attracting people and commerce activities over the last decade. Expanding from a few thousand people in 1993 to more than 150 million in 1999, the Web was expected to attract over one billion by 2004 [1]. This growth attracted a variety of organizations to take advantage of the Web-based economic model, which offers opportunities for internal efficiencies and external growth via electronic business (EB) activities. For the purposes of this study, EB activities were considered to be a simple implementation of Internet website or a more complex implementation, such as business-to-consumer (B2C), business-to-business (B2B), consumer-to-consumer (C2C), or Intranet and/or Extranet applications like Web-CRM, Web-ERP, etc. This broad definition allowed us to group the companies with varying degrees of EB activities and conduct financial performance analysis at the aggregate level rather than focusing on individual firms. Firm level performance is often influenced by good management and leadership styles [7] or the quality of EB implementation. Our goal was to determine the broad influence of EB on corporations and industries, not on a specific company's performance. According to the Census Bureau of the U.S. Department of Commerce [21], the retail e-commerce sales in the third quarter of 2000 was over $ 6 billion, up by 15.3% from the second quarter and more than 2.5 times the 1998 holiday Internet sales. Internet retail sales increased more than 66% to $ 44.5 billion in 2000 despite the demise of many dot-com companies in the slowing economy. According to Porter [20] the Internet made revolutionary changes to the fundamental business model. For example, Hoffman and Novak [11] found many researchers and business practitioners claiming that the Internet “will change the way we do business” and make a dramatic impact on performances of companies in many industries. However, many investors and executives felt that they were duped into investing millions of dollars more than they needed. Consequently, they do not want to invest more on EB projects of dubious merit. This does not mean that investors are reluctant to make strategic technology investments, but, it does mean closer monitoring of investment in new EB activities. Nonetheless, the Web-based economic model is much more efficient at the transaction cost level [28]. For example, the traditional cost of processing an airline ticket is 8 $ but is only 1 $ through the Web. Similarly, other efficiencies can be derived from marketing and advertisements. Elimination of the middleman in the distribution channel (disintermediation) also can have a big impact on the market efficiency [19]. Other efficiencies are generated by smaller or no inventory, resulting in smaller storage or real-estate space, a larger customer base, and 24 h access for all 7 days per week with no additional cost [26]. Marketing on the Web can result in additional unit sales at very low unit cost. In addition, it also enables higher level of customization to the needs of individual clients [6]. Auto manufacturers, such as Ford and GM, are experimenting with custom designed cars that can be delivered in less than two weeks at a customer's home [27]. Thus, web-enabling business processes is attractive in the new economy where product life cycles are short and efficient and the market for products and services is global. Similarly, management expects a better financial performance. EB also allows organizations to expand their business reach. One key benefit of the Web is access to and from global markets [8]. The Web eliminates several geographical barriers for a corporation that wants to conduct global commerce. But political, trade, and cultural barriers may still make this difficult. While traditional commerce relied on value-added networks (VANs) or private networks, which were expensive and provided limited connectivity [22], the Web makes e-commerce cheaper. Corporations can produce goods anywhere and deliver them electronically or physically via couriers. This enables organization the flexibility to expand into different product lines and markets quickly, with low investments. Secondly, full time availability, better communication with customers, and sharing of the organizational knowledgebase allows the organization to provide better customer service. This translates to better customer retention rates and repeat orders. Finally, the rich interactive media and database technology of the Web allows for unconstrained awareness, visibility, and opportunity for an organization to promote its products and services [24]. This enhances an organizations’ ability to attract new customers, increasing their overall markets and profitability. Despite the recent dot-com failures [10], EB has made tremendous in-roads in traditional corporations. Forrester research found that 90% of the firms they surveyed plan to conduct some e-commerce, B2C, or B2B, and it predicts that EB transactions will rise to about $ 6.9 trillion by 2004. However, there are no macro-economic studies that demonstrate whether the companies in general can benefit from EB. This paper introduces an exploratory measurement model to study the impact of EB activities on financial performance and to conduct an intra- and inter-industry level analysis. The model was evaluated by using financial data from 165 companies in the years 1991–2000; the companies were grouped and analyzed in a comparative analysis. Eighty three of these companies implemented EB activities from 1996. The companies were not pure “click” enterprises, like Amazon.com, e-Bay, or Yahoo, because we were interested on the financial impact of EB. Also, we needed pre-EB activities data, which was not available for pure click companies. Instead, they were traditional brick corporations, such as AutoZone, Fastenal, and others that had decided to compete in the new economy with EB activities and the so-called, brick & click companies. Specifically, our objective was to determine whether the financial data support the claims that EB has boosted the bottom-line performance.

A financial performance analysis of 165 companies over a period of 10 years, as a group and by industry, partially supported the view that EB activities have had favorable impact on the macro performance of the industries. Based on the sample data, no conclusions can be drawn at the firm level. The proposed model may be suitable for measuring the financial impact of EB activities at the group level. By comparing the post-EB performance with the pre-EB performance of the industry, the direction and the magnitude of the impact of such activities on the end result of business functions was determined. Further, by contrasting the performances of EB companies against nEB, the findings reinforced our belief that the EB companies have benefited from innovation and strategic integration, though this was not shown to be statistically significant. While the EB initiatives appear to have had some beneficial impact on business performance, the results have apparently been exaggerated in the e-business literature. If any, the benefits are neither substantial nor similar across an industry or even within a company. Despite these ambiguous results, companies would be well advised to pursue a strategy that includes an EB activity. It is beneficial to enter this arena to remain competitive. This mode of conducting transactions will become just as essential to business as telephones and fax machines were. However, some companies in the industry will always do better than others due to innovative leadership, recruitment, retention, disciplined culture and constant innovation, among other elements.