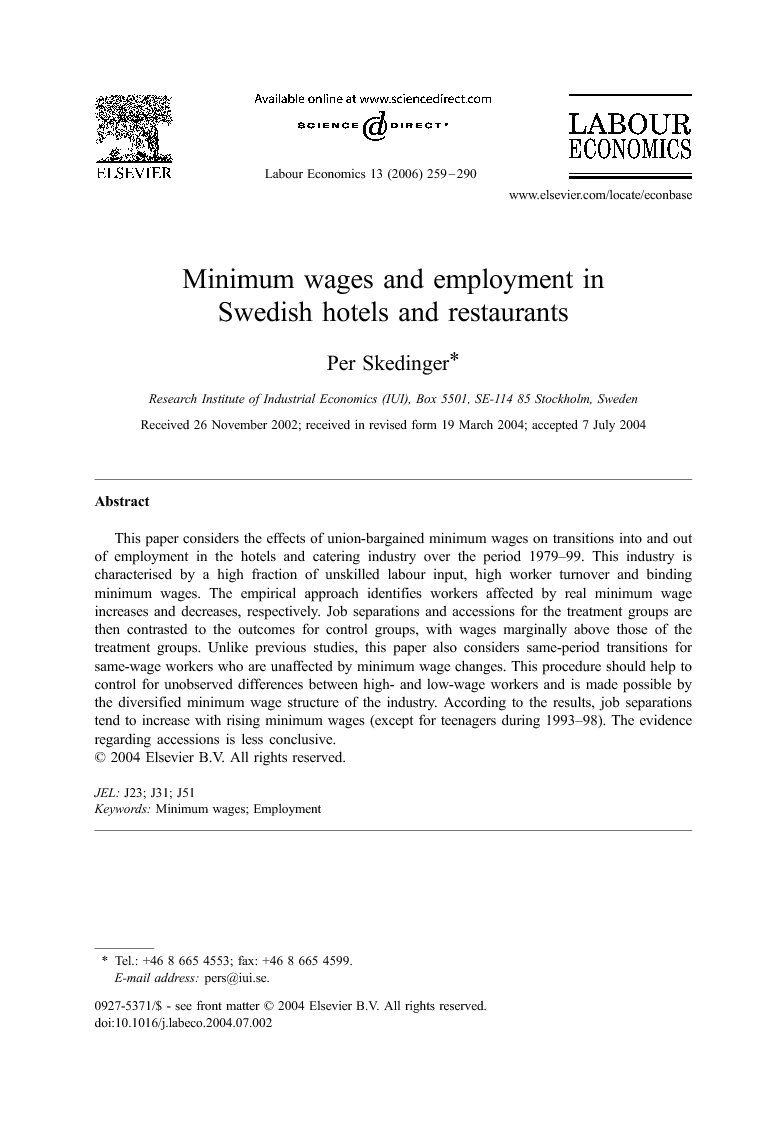 This paper considers the effects of union-bargained minimum wages on transitions into and out of employment in the hotels and catering industry over the period 1979–99. This industry is characterised by a high fraction of unskilled labour input, high worker turnover and binding minimum wages. The empirical approach identifies workers affected by real minimum wage increases and decreases, respectively. Job separations and accessions for the treatment groups are then contrasted to the outcomes for control groups, with wages marginally above those of the treatment groups. Unlike previous studies, this paper also considers same-period transitions for same-wage workers who are unaffected by minimum wage changes. This procedure should help to control for unobserved differences between high- and low-wage workers and is made possible by the diversified minimum wage structure of the industry. According to the results, job separations tend to increase with rising minimum wages (except for teenagers during 1993–98). The evidence regarding accessions is less conclusive.

The employment effects of minimum wages have been subject to extensive empirical scrutiny for decades. In recent work, two different approaches can be identified. The first one considers net worker flows and the overwhelming majority of the studies belong to this category. The second approach deals with gross worker flows. The influential studies by Card and Krueger, 1994 and Card and Krueger, 1995, on U.S. fast-food restaurants, are examples of the net flows approach, as are the British studies by Dickens et al. (1999) and Machin and Manning (1994), and Neumark and Wascher (1992), on U.S. data, although the evaluation methodologies differ in other respects. None of these studies, except Neumark and Wascher (1992), find strong negative employment effects from minimum wage increases, and some even suggest small positive effects.1 This paper follows a line of analysis, in which gross worker flows are considered, used by Abowd et al., 2000a and Abowd et al., 2000b on U.S. and French data, Askildsen et al. (2000) for Norway, Currie and Fallick (1996) and Zavodny (2000) for the U.S., Kramarz and Philippon (2001) for France, and Stewart, 2004a and Stewart, 2004b on U.K. data. The evidence in these studies is mixed. While most find non-negligible negative employment effects from minimum wages, Askildsen et al. (2000) and Stewart, 2004a and Stewart, 2004b do not. The gross flows approach, which requires longitudinal micro-data on individuals, offers the advantage of allowing employment adjustment to minimum wages to be disaggregated into hirings and separations, rather than net changes in the total number of employed. The gross flows approach identifies workers affected by real minimum wage increases and decreases, respectively. Job separations and accessions for the treatment groups are then contrasted to the outcomes for control groups, with wages marginally above those of the treatment groups. The validity of the method hinges, inter alia, on the assumption of comparability of treatment and control groups. Even in the absence of a minimum wage, the control group is likely to exhibit fewer separations and accessions. It is argued that a higher degree of comparability is achieved in this study than in previous analyses. This is due to the unusual quality and detail of the data set employed, covering workers in the hotels and catering industry. The rates within the chosen industry are differentiated by age, region, occupation and experience. A diversified structure is typical for labour markets with union-bargained minimum wages. Although differentiation of rates depending on region and age occur also in statutory systems, industry-, occupation- and experience-specific rates are less common (OECD, 1998). Unlike previous papers using the gross flows approach, this study makes use of the diversified structure in order to identify unaffected workers with the same wages as workers assumed to be affected by increasing or decreasing minimum wages. In addition, the unaffected workers are located in the same industry and have experienced minimum wage changes in the same direction as the affected workers.2 These unaffected workers have been subjected to a “pseudo-experiment”, since they should not be expected to differ in transition probabilities from their respective control groups due to changing minimum wages. The information from the pseudo-experiments should help to control for unobserved differences between high- and low-wage workers and is used as an extra check on the validity of the results. The hotels and catering industry appears to be a suitable candidate for investigating the employment effects of minimum wages. The fraction of unskilled labour input is high and the minimum wages, which apply to all workers and firms, tend to be binding.3 The availability of escape routes to alternative employment with lower minimum wages should be limited, although worker turnover rates are very high. Wage costs constitute 35–40 percent of total factor costs (SHR, 1996), which is more than in manufacturing or in retail services. A potential drawback with the choice of this industry, however, is the existence of underground activity. It is often alleged that employees in the restaurant business are more prone not to declare their earnings than workers in other sectors of the economy. The data set contains over 200,000 observations on unskilled workers and covers the period 1979–99. It includes ample information on worker and firm characteristics—age, gender, hourly wage, occupation, job tenure, type of employment contract, region and firm size. The minimum wages have been collected from the collective wage agreements and added to the data set. This paper proceeds as follows. Section 2 sets out to describe the evolution of minimum wages in hotels and catering over the period of study. The data set is discussed in Section 3, which also describes the empirical strategy. In Section 4, the econometric results are presented. A brief conclusion is given in Section 5.

The empirical approach in this study identifies workers affected by real minimum wage increases and decreases, respectively. Job separations and accessions for the treatment groups are then contrasted to the outcomes for control groups, with wages marginally above those of the treatment groups. The technique is based on the standard competitive model, where employment is determined along the labour demand curve. Using data from hotels and restaurants over the period 1979–99, we find that job separations tend to increase with rising minimum wages (except for teenagers during 1993–98). The evidence regarding accessions is less conclusive. The identifying assumption that employment retention or accessions are the same in the treatment and control groups in the absence of any changes in the minimum wage has been tested in various ways. Firstly, pseudo-experiments arising from the diversified minimum wage structure have been examined. Employment transitions of unaffected workers with the same wages as well as minimum wage changes in the same directions as affected workers have been analysed. The pseudo-treatment effects of the unaffected workers turn out to be non-zero in most cases, which suggests the presence of structural differences between treatment and control groups, not accounted for in the simple-difference analysis. The pseudo-experiments indicate less clear-cut results for decreasing than for increasing minimum wages, since the employment effects are quite sensitive to the choice of comparison groups. Additional experiments, considering increases of the minimum wage to examine entry and decreases to examine exits, seem to corroborate the findings of less robustness pertaining to accessions. In these regressions, there is some evidence of supply effects, i.e., increasing accessions as minimum wages rise. This is contrary to the assumptions of the underlying model of demand-determined employment but may be consistent with a monopsony model. The study deals with employment transitions in and out of a particular industry and does not take into account whether separated workers have found jobs elsewhere. If this is the case, the negative employment effects of increasing minimum wages tend to be mitigated. However, since minimum wages are low in the hotels and catering industry it seems unlikely that laid-off workers, affected by a minimum wage hike, should be able to find employment elsewhere with lower wages. Our results differ from previous studies by, e.g., Card and Krueger, 1994 and Card and Krueger, 1995 on U.S. fast-food restaurants, which failed to establish adverse employment effects from minimum wages. A possible explanation may be that the minimum wage bite in Sweden tends to be larger than in the U.S. (and the U.K.) in general (Dolado et al., 1996, Table 1). In Swedish hotels and restaurants, the minimum wage bite among unskilled workers above the age of 20 is around 85–90 percent of prime-age workers' wages in the same industry. The small employment effects found during the period with substantially reduced minimum wages for teenagers (1993–98) also suggest that the level of minimum wages may be important. It should be cautioned that any remaining unobserved individual heterogeneity may bias the results, to the extent that it is correlated with variables indicating whether a worker is subject to treatment or not. The fact that few individuals are observed over two consecutive periods renders standard fixed-effects estimation in order to control for unobserved individual heterogeneity intractable. There may be other forms of adjustment in the short run, not considered in this study, such as effects on work hours or the incidence of fixed-term contracts. In addition, the changes in the minimum wage structure that have occurred may have had repercussions on wage dispersion, both within the group of unskilled workers and between unskilled and skilled workers.