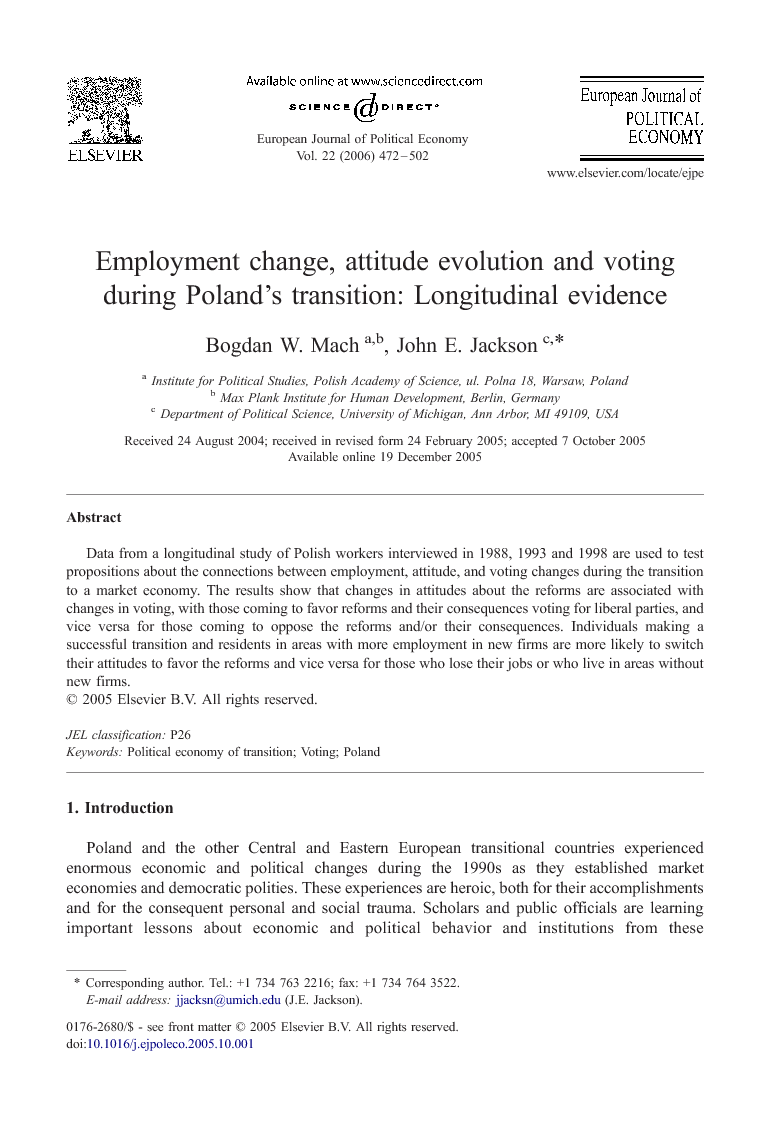 Data from a longitudinal study of Polish workers interviewed in 1988, 1993 and 1998 are used to test propositions about the connections between employment, attitude, and voting changes during the transition to a market economy. The results show that changes in attitudes about the reforms are associated with changes in voting, with those coming to favor reforms and their consequences voting for liberal parties, and vice versa for those coming to oppose the reforms and/or their consequences. Individuals making a successful transition and residents in areas with more employment in new firms are more likely to switch their attitudes to favor the reforms and vice versa for those who lose their jobs or who live in areas without new firms.

Poland and the other Central and Eastern European transitional countries experienced enormous economic and political changes during the 1990s as they established market economies and democratic polities. These experiences are heroic, both for their accomplishments and for the consequent personal and social trauma. Scholars and public officials are learning important lessons about economic and political behavior and institutions from these accomplishments and traumas. These lessons begin to correct some of the excessive, and naïve, views held at the beginning of the transitions. The assumption that stabilization, liberalization, and privatization by themselves are sufficient to create a growing market economy is now widely questioned. Studies of job destruction and job creation in East Central European countries clearly show that economic growth and the successful establishment of a market economy follow a Schumpeterian path, requiring the rapid creation of new firms to replace the old and outmoded enterprises. See Bilsen and Konings (1998), for evidence from Romania, Bulgaria and Hungary; De Loecker and Konings (2005—this issue) on Slovenia; Jackson et al., 1999 and Jackson et al., 2005, and Jackson and Mach (2002), for evidence from Poland; and Jurjada and Terrell (2001), on the Czech Republic and Estonia. The orderly political transitions in many of these countries following intensely contested elections held during economically difficult periods of extensive job destruction attest to the success of the political reforms. These successful transitions refute the predictions of some political scientists and economists that the trauma associated with the economic transition would create such an anti-reform backlash that an open political system might not be able to resist efforts to return parts of the old regimes. In fact, where the economic reforms are most successful, political parties begin to compete for the constituents arising from the new enterprises and in the process even the former Communists became more liberal in their policies (see Grzymaƚa-Busse, 2002). This paper contributes to our understanding of the connections between economic and political transitions by examining hypotheses about how individual and regional employment changes are associated with changes in attitudes about economic policies as well as about how attitudes and changes in attitudes, in turn, are related to changes in how people vote. To test our hypotheses we use a unique set of data from a panel study of Poles first interviewed in 1988, a year before the transition formally began, and then re-interviewed in 1993 and 1998. Appendix A describes these data in detail. We are in the envious position of being able to measure employment changes during two critical periods of the Polish transition, political attitudes at two important junctures in the transition, and vote choices during the three important parliamentary elections in 1991, 1993 and 1997. Analyses of these data provide evidence about the evolution of these dimensions of Poland's political economy that are unavailable from the aggregate and cross-sectional data usually available. The paper is organized into three major sections. The first section describes our propositions about how employment changes are associated with attitude changes, which are then related to vote changes. We build on the existing literature on the political economy of transitions and explicitly add the attitudinal component. This attitudinal component provides both an important conceptual link between employment change and voting, which is missing from many economic models, and an important connection between the consequences of economic reforms and people's voting choices. The next section is an analysis of how attitude changes vary with individual and regional economic changes. This section is followed by a statistical analysis of the association between these attitudes and their changes and the dynamics of voter choice from one election to the next. We conclude with observations about some of the theoretical questions in political economy and about some of the substantive questions of how governments might manage transitions.

A brief summary of our results is that individual and regional employment changes are associated with changes in attitudes about economic policies, which in turn are associated with changes in people's votes. Voting decisions among Poles strongly reflect views about the direction the transformation should take, opinions about how people are faring collectively and personally during the transition, and the emergence of constituencies organized around the activities contributing to the decline of some sectors and the growth of others. The Polish experience clearly suggests that simultaneous economic and political reforms are possible, and the evidence from these panel data point to why. We began with the question of whether the significant employment changes associated with Poland's transition to a market economy are associated with changes in political behavior, and We began with the question of whether the significant employment changes associated with Poland's transition to a market economy are associated with changes in political behavior, and specifically how support and opposition to reform parties are affected by these changes. The evidence shows that those becoming unemployed and those remaining in state enterprises became more likely to vote for parties proposing to slow the reforms and to provide support for the large state enterprises. Conversely, those who became owners and self-employed were more likely to switch their votes to parties promoting the economic reforms. What is a bit surprising is that workers who moved to the private sector, either by finding new jobs or through privatization did not change their attitudes and voting patterns. The detailed analysis of individual attitudes shows that shifts in voting decisions are closely associated with attitudes and changes in attitudes about the direction and success of the reforms. This result is theoretically pleasing in that it provides a behavioral connection between changes in employment status and voting as employment changes are strongly associated with attitude changes, which are related to votes. Beyond individual changes, changes in the local economy in the form of higher rates of de novo job creation are also associated with changes in attitudes, independent of the respondent's employment. These results imply a demonstration effect whereby people who see direct evidence of the reforms' success become more likely to develop pro-reform attitudes, and vice versa for those who do not see any success. A second, and not mutually exclusive interpretation, is that the results offer indirect support for Rodrick's and Fidrmuc's propositions that when state and unemployed workers have, or see, opportunities to obtain new private sector jobs they become less opposed to the reforms and may be more likely to vote for reform parties. State sector workers and the unemployed in regions with a high level of de novo job creation would see greater opportunities than workers in regions with less job creation. The associations between individual and regional success in the transition and changes in attitudes and the substantial association between these attitudes and voting offer a message to reform governments. Analysis of job creation and destruction establishes that successful economic reform requires de novo firm creation and growth. This economic success leads to the growth of liberal constituencies that support reform parties and that can pressure less liberal parties to become more liberal in their platforms. What is particularly significant is that regionally successful reforms are likely to change people's attitudes, even if they themselves are not the entrepreneurs and self-employed, and thereby build further political support for liberal policies and the parties that promote them. The path to successful and simultaneous economic and political reform is through the development of the de novo economy, which both creates jobs and income and builds a liberal political constituency.