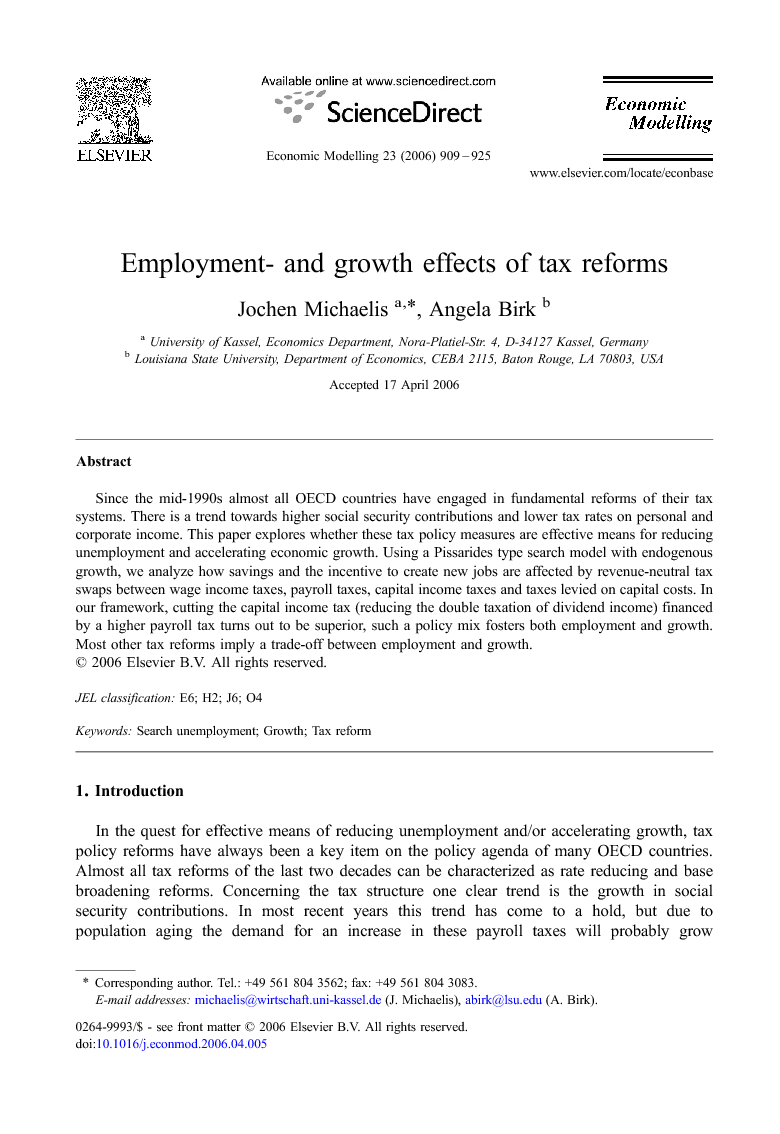 Since the mid-1990s almost all OECD countries have engaged in fundamental reforms of their tax systems. There is a trend towards higher social security contributions and lower tax rates on personal and corporate income. This paper explores whether these tax policy measures are effective means for reducing unemployment and accelerating economic growth. Using a Pissarides type search model with endogenous growth, we analyze how savings and the incentive to create new jobs are affected by revenue-neutral tax swaps between wage income taxes, payroll taxes, capital income taxes and taxes levied on capital costs. In our framework, cutting the capital income tax (reducing the double taxation of dividend income) financed by a higher payroll tax turns out to be superior, such a policy mix fosters both employment and growth. Most other tax reforms imply a trade-off between employment and growth.

In this paper we have analyzed the employment and growth effects of different revenue-neutral tax reforms. The main results are stated in both the abstract and the introduction, so there is no need to repeat them here. Our analysis suggests that there is a “first-best tax reform” in terms of higher employment and growth: cut the capital income tax and – in order to fulfill the budget constraint – increase the payroll tax. It is interesting to note that this policy recommendation is a turn-around to the recommendation given by Daveri and Tabellini (2000), who state that a cut in labor taxes financed by higher capital taxes is good for growth and employment. The reason for these conflicting results remains cloudy, since the models differ in the assumed driving force of growth, the modeling of labor market imperfections and the saving decision of households. Further research is needed in order to identify the crucial assumptions and critical parameters, which determine not only the magnitude but even the sign of the employment and growth effects of tax reforms. Lastly, let us mention two limitations of our framework. We do not have a criterion which allows us to analyze meaningfully the welfare implications of alternative policies. In particular, if the employment and growth effects show different signs, an unambiguous ranking of the tax instruments is not possible and thus the policy conclusions are only vague. A related point is concerned with our focus on analytical results. The method of log-linearization restricts us to small changes in the policy parameters. In order to evaluate large policy shocks and/or to get a numerical assessment of the employment and growth effects, a calibration of the model would be necessary.