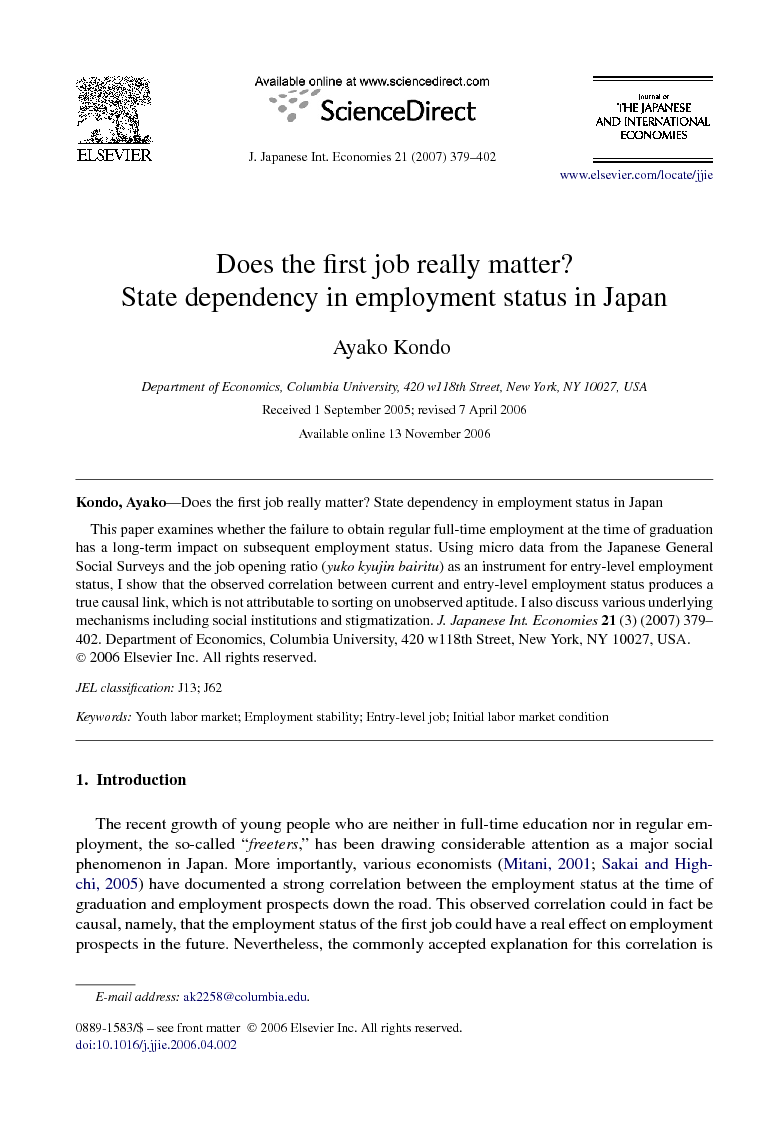 This paper examines whether the failure to obtain regular full-time employment at the time of graduation has a long-term impact on subsequent employment status. Using micro data from the Japanese General Social Surveys and the job opening ratio (yuko kyujin bairitu) as an instrument for entry-level employment status, I show that the observed correlation between current and entry-level employment status produces a true causal link, which is not attributable to sorting on unobserved aptitude. I also discuss various underlying mechanisms including social institutions and stigmatization. J. Japanese Int. Economies21 (3) (2007) 379–402.

Employment status shows strong persistence in Japan. Using the labor market conditions at entry as an instrument, I conclude that the entry-level employment status actually has a considerable causal effect on current status. Furthermore, the instrumental variable exactly identifies persistent negative effects on people who by chance entered the labor force when the market was loose and failed to obtain regular jobs. Thus, this paper challenges the view that the poor performances of freeters can be attributed to their unwillingness to work and ineptitude for regular employment. Loss of skill or morale, if any, seems to be rather a consequence than a cause of being a freeter. A deteriorating youth employment situation could leave a lasting scar on the aggrieved generation. At the same time, a persistent effect of failure at entry gives a clue to understanding the known cohort effects on wages and mobility. When the opportunities for regular full-time employment are largely restricted to recent graduates, a large part of the labor market outcomes of each cohort would be determined at the timing of entry. If so, the labor market conditions in the year of entry may well have long-term effects on wages and mobility. Again, the distinction between a causal relationship and spurious correlation is essential because sorting on unobservable abilities within a cohort can also generate a positive correlation between past and current employment status. There are several potential reasons for the state dependence in employment status in Japan. Among others, I view the social institutions favorable to new graduates and the negative signaling effect as the primary causes, and they are mutually reinforcing. Typical employment practice of Japanese firms and the school-to-work transition system give advantages to new graduates. The social norm that everyone should obtain a regular job right after graduation stigmatizes those who could not obtain a regular job when leaving school. This negative signal prevents employers from hiring those who failed at entry and sustains the social institutions favorable to new graduates. The gap in effects of failure at entry between less educated group and more educated group supports this interpretation, although the small sample size limits ability to perform detailed analysis by demographic group or cohort. An important reservation is that this paper does not reflect the drastic changes after the economic crash in the late 1990s, because those who left school after 1998 are completely excluded from the data. The sudden fall in the proportion of regular full-time workers might have changed the structure of the labor market. It is ambiguous which direction the change was in the short run; on one hand, it might weaken the signaling effect, on the other hand, lack of job opportunity might rather aggravate the effect. In the longer term, everything else being equal, labor shortage due to shrinking youth population might make it easier to find a regular full-time job even for those who lack experience. However, it is precipitant to be optimistic because the supply-driven positive effect may be canceled out if the demand for regular full-time workers also decreases. The deep recession in the late 1990s triggered various changes in the Japanese employment practice, and their consequences are still undetermined. How the undergoing changes in the labor market have affected the consequence of initial disadvantage will be an important topic for future investigation after further data is accumulated.