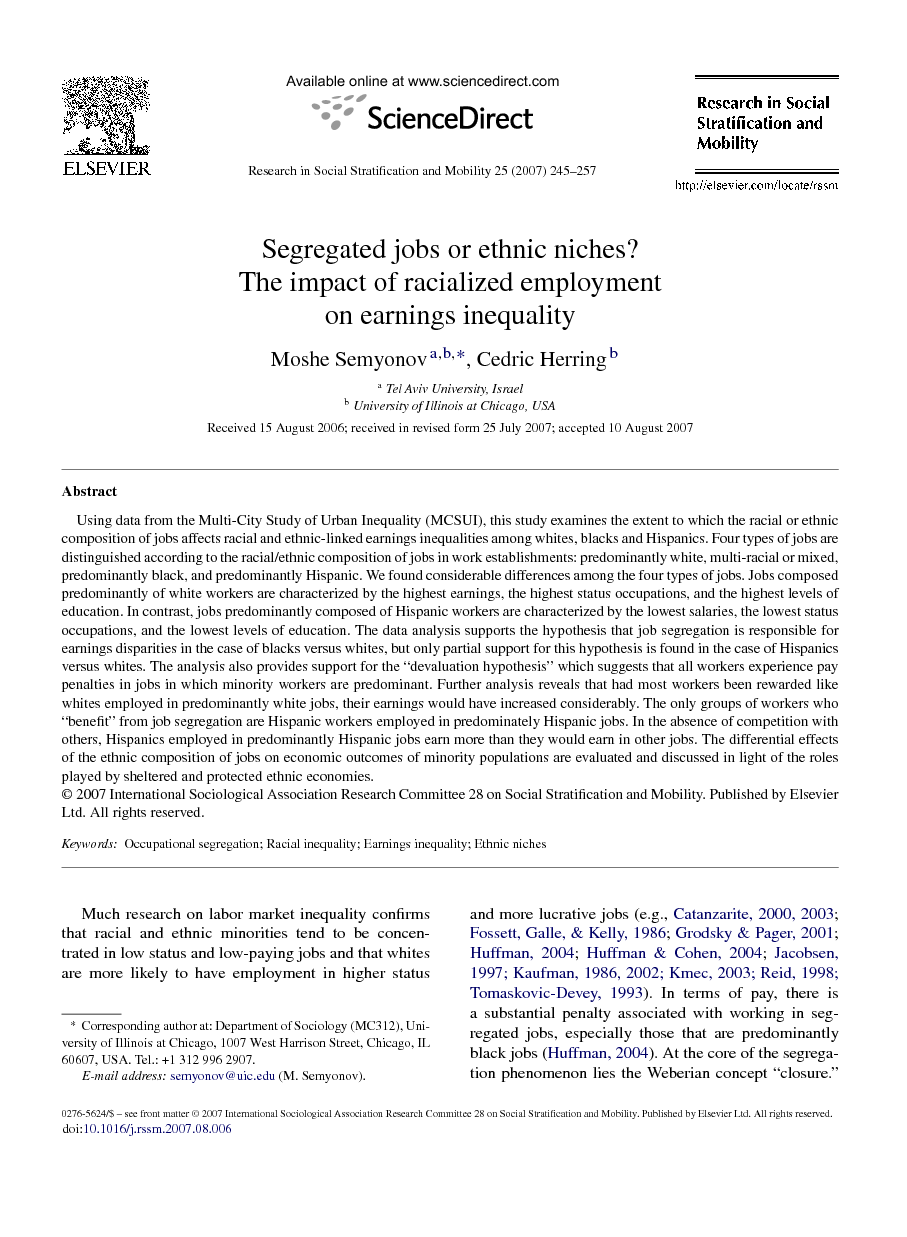 Using data from the Multi-City Study of Urban Inequality (MCSUI), this study examines the extent to which the racial or ethnic composition of jobs affects racial and ethnic-linked earnings inequalities among whites, blacks and Hispanics. Four types of jobs are distinguished according to the racial/ethnic composition of jobs in work establishments: predominantly white, multi-racial or mixed, predominantly black, and predominantly Hispanic. We found considerable differences among the four types of jobs. Jobs composed predominantly of white workers are characterized by the highest earnings, the highest status occupations, and the highest levels of education. In contrast, jobs predominantly composed of Hispanic workers are characterized by the lowest salaries, the lowest status occupations, and the lowest levels of education. The data analysis supports the hypothesis that job segregation is responsible for earnings disparities in the case of blacks versus whites, but only partial support for this hypothesis is found in the case of Hispanics versus whites. The analysis also provides support for the “devaluation hypothesis” which suggests that all workers experience pay penalties in jobs in which minority workers are predominant. Further analysis reveals that had most workers been rewarded like whites employed in predominantly white jobs, their earnings would have increased considerably. The only groups of workers who “benefit” from job segregation are Hispanic workers employed in predominately Hispanic jobs. In the absence of competition with others, Hispanics employed in predominantly Hispanic jobs earn more than they would earn in other jobs. The differential effects of the ethnic composition of jobs on economic outcomes of minority populations are evaluated and discussed in light of the roles played by sheltered and protected ethnic economies.

Much research on labor market inequality confirms that racial and ethnic minorities tend to be concentrated in low status and low-paying jobs and that whites are more likely to have employment in higher status and more lucrative jobs (e.g., Catanzarite, 2000 and Catanzarite, 2003; Fossett, Galle, & Kelly, 1986; Grodsky & Pager, 2001; Huffman, 2004; Huffman & Cohen, 2004; Jacobsen, 1997, Kaufman, 1986, Kaufman, 2002, Kmec, 2003, Reid, 1998 and Tomaskovic-Devey, 1993). In terms of pay, there is a substantial penalty associated with working in segregated jobs, especially those that are predominantly black jobs (Huffman, 2004). At the core of the segregation phenomenon lies the Weberian concept “closure.” According to this concept, “social collectivities seek to maximize rewards by restricting access to resources and opportunities to a limited circle of eligibles” (Parkin, 1979: 99). To put this in Tilly's (1999: 8) words, “categorical inequality” pertains to actions taken by “people who control access to value producing resources solve organizational problems by means of categorical distinctions. Inadvertently or otherwise, those people set up systems of social colosure, exclusion and control.” Indeed, social scientists have viewed segregation in the labor market as one of the most effective mechanisms through which racial and ethnic minorities are denied access to economic rewards. Thus, labor market segregation acts as a major determinant of racial and ethnic inequality. Although researchers uniformly agree that segregation has detrimental consequences for the socioeconomic outcomes of the minority population, several have debated whether concentration of minority workers in a labor market (whether an occupation, an industry, a job or a locality) depresses earnings (or wages) of all incumbents (e.g., Catanzarite, 2003; Hircsh & Schumacher, 1992; Huffman & Cohen, 2004; Kmec, 2003 and Reid, 1998; Tienda & Lii, 1987; Wilson, 1999). To date, most studies on this issue suggest that all incumbents, regardless of their race or ethnicity, pay penalties in labor markets in which the majority of workers belong to a subordinate racial or ethnic minority group. Yet, several researchers specify conditions under which minority members can actually benefit from working in “ethnic niches” in which they are segregated from other racial and ethnic groups. That is, when racial and ethnic minorities constitute a numerical majority in an occupational niche, an industry, or a local labor market, they can gain control and hegemony over the market; hence, they can enjoy relative advantages not available elsewhere (e.g., Aldrich, Cater, Jones, Mcevoy, & Velleman, 1985; Jibou, 1988; Lewin-Epstein & Semyonov, 1994; Pfeffer, 1983; Waldinger, 1996; Waldinger, Aldrich, & Ward, 1990). Similarly, due to segregation, minorities often establish ethnic enclaves or mono-ethnic labor markets in which they are able to shelter themselves from the detrimental consequences of discrimination. At times, they are even able to benefit relatively from employment in the “segregated ethnic labor markets” (Aldrich et al., 1985 and Jibou, 1988; Lewin-Epstein & Semyonov, 1994; Portes & Bach, 1985; Semyonov, 1988; Wilson & Martin, 1982). In this paper, we examine the relationship between the racial and ethnic composition of jobs and earnings inequality. Specifically, we look at whether earnings inequalities among whites, blacks and Hispanics can be attributed to segregation across jobs and whether such segregation produces divergent patterns of earnings inequality. Similar to previous studies on the issue (e.g., Catanzarite & Aguilera, 2002; Kmec, 2003), we distinguish between jobs in work settings which are predominantly composed of minority workers (i.e., blacks and Hispanics) and jobs that are either mixed or that are predominantly composed of white workers. Also similar to previous studies on the issue, we examine the extent to which ethnic composition of jobs intervenes between racial minority status and economic outcomes. We also analyze the degree to which concentration of minority workers in jobs produces earnings penalties for all incumbents. Unlike previous studies on this issue, however, we extend the analysis also to examine the extent to which racial and ethnic segregation across jobs results in different patterns of inequality. By doing so, we will be in a position to better understand the mechanisms through which job segregation affects racially linked earnings inequality in the labor market