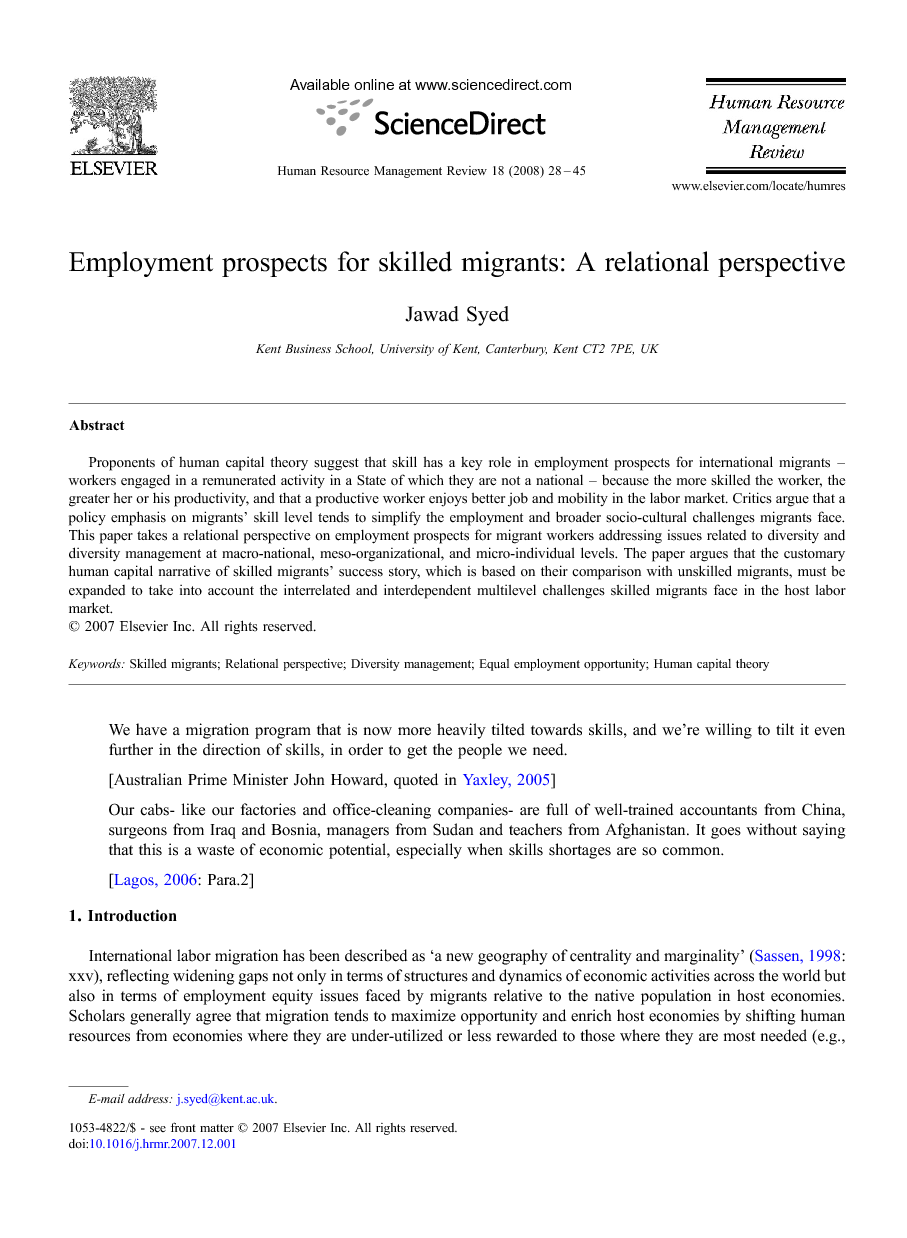 Proponents of human capital theory suggest that skill has a key role in employment prospects for international migrants – workers engaged in a remunerated activity in a State of which they are not a national – because the more skilled the worker, the greater her or his productivity, and that a productive worker enjoys better job and mobility in the labor market. Critics argue that a policy emphasis on migrants' skill level tends to simplify the employment and broader socio-cultural challenges migrants face. This paper takes a relational perspective on employment prospects for migrant workers addressing issues related to diversity and diversity management at macro-national, meso-organizational, and micro-individual levels. The paper argues that the customary human capital narrative of skilled migrants' success story, which is based on their comparison with unskilled migrants, must be expanded to take into account the interrelated and interdependent multilevel challenges skilled migrants face in the host labor market.

International labor migration has been described as ‘a new geography of centrality and marginality’ (Sassen, 1998: xxv), reflecting widening gaps not only in terms of structures and dynamics of economic activities across the world but also in terms of employment equity issues faced by migrants relative to the native population in host economies. Scholars generally agree that migration tends to maximize opportunity and enrich host economies by shifting human resources from economies where they are under-utilized or less rewarded to those where they are most needed (e.g., Benson-Rea and Rawlinson, 2003 and Kerr, 1997). Migrant workers, i.e., those engaged in a remunerated activity in a State of which they are not a national, have a considerable influence on the world economy (Massey & Jess, 1995). For example, in Ireland, migrant workers are estimated to have added up to 3% growth to gross national product between 2003 and 2005 (McDonald, 2007). Similarly, in the USA, there is some evidence that immigrants increase specialization in the economy, enhance the nation's productive capacity, and aid innovation (Anderson, 2006). In the last few decades, there has been a surge in skilled migration, in particular from ‘developing’ to ‘developed’ countries (Iredale 1999), with implications for the broader strategies of national progress and planning (Papademetriou & Yale-Loehr, 1995). The increased mobility of migrants also increases the internationalization of professions and professional labor markets (Iredale, 2001). The result is a complex network of culturally diverse workforces and markets (Bachmann, 2006), an important subject in contemporary academic and policy research. There is a good deal of debate about the issues and challenges migrant workers face in the international labor market. Migrant research generally utilizes human capital theory to explain how individual attributes of migrants affect their labor market outcomes (Ho, 2006). Proponents of this theory usually apply quantitative methods to demonstrate that skill has a key role in employment prospects for international migrants because the more skilled the worker, the greater her or his productivity, and that a productive worker usually enjoys better job and mobility in the labor market (Becker, 1993 and Mincer, 1993). Accordingly, an investment in skill by the individual or the organization is seen as an investment in productivity that returns as income through gainful employment (Mayer, 1996). However, critics argue that there is a hole in our understanding of international migration because human capital studies usually lack in depth qualitative insights into migrants' issues, and that by causally linking employment outcomes to skill, such studies tend to exaggerate the success stories of skilled migrants in host labor markets (Ho & Alcorso, 2004). Consequently, migration policies that rest solely on human capital research may be misguided. Indeed, a narrow emphasis on skills does not explain how the interaction between individuals and their socio-cultural contexts is shaped by the structure of occupational opportunity, which in turn improves or hampers their career development (Miller, 1999).1 The current paper examines the employment prospects for skilled legal migrants (i.e., those legally entitled to work) through a relational perspective that transcends the disciplinary and methodological demarcations (such as human capital, socio-cultural and psychological orientations) that usually characterize migrant research. Based in the literature, the paper uses Syed and Özbilgin's (2007) relational framework for managing diversity to review the employment contexts of migrant workers at macro-national, meso-organizational, and micro-individual levels. Syed and Özbilgin argue that the usual single-level conceptualizations of managing diversity in the realm of legal or organizational policy fail to capture the interplay of multilevel challenges as well as structural and intersectional concerns of equality. They argue that the macro, meso and micro domains of diversity exist in a state of relational interdependence because individual workplace experiences and perspectives are not just a product of but also contribute to the macro-national and meso-organizational responses towards diversity. However, despite the ambitious framework that multilevel perspectives may offer (e.g., House et al., 1995, Klein and Kozlowski, 2000 and Klein et al., 1999), there is little research that can be termed as relational or multilevel in the field of managing diversity. The current paper addresses this gap by examining the multilevel issues skilled legal migrants from developing countries face in their pursuit of employment in developed countries. Drawing on previous research on international migrants in Australia, USA, UK, and other Western industrialized countries, the paper argues that skilled migrants constitute much more than a factor of production flowing across international borders, and that their employment opportunities are not only shaped by their skills and economic factors but also by their perceptions and experiences of the host society and its occupational opportunity structure. Instead of confining migrants' employment opportunities to either the human capital or socio-cultural perspective, this paper's relational approach to the complex issues skilled migrants face takes into account multiple challenges surrounding migrants' employment in host economies. The paper is divided into three main sections. Based on evidence of the disadvantage migrants face in developed countries, the first section argues that skilled migration constitutes a complex phenomenon often misunderstood in policy and research contexts. The second section offers a relational perspective on the issues and challenges skilled migrants face at the macro-national, meso-organization and micro-individual levels. The third section proposes a framework for future empirical research on this topic.