عنوان انگلیسی
When earning is beneficial for learning: The relation of employment and leisure activities to academic outcomes
دانلود فوری مقاله + سفارش ترجمه 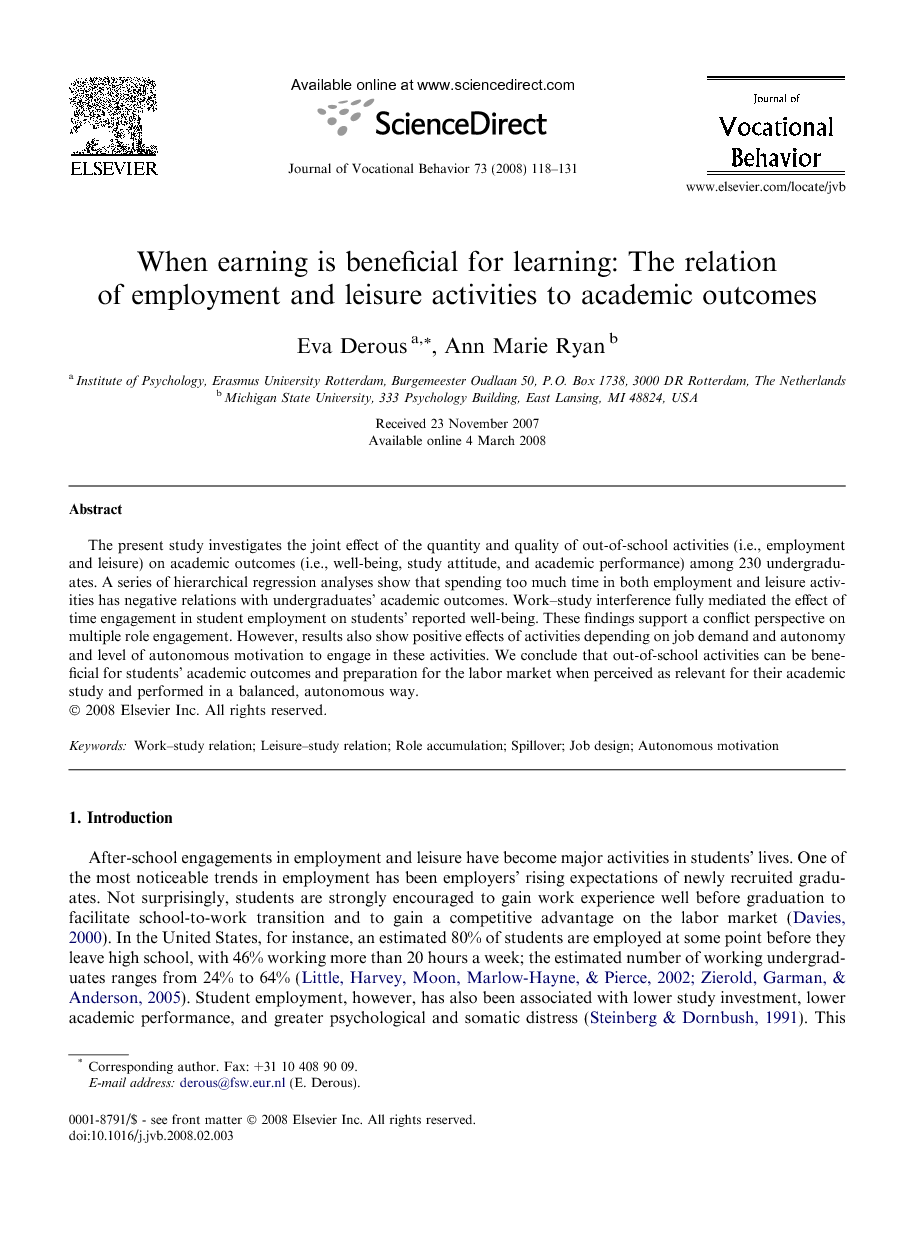 The present study investigates the joint effect of the quantity and quality of out-of-school activities (i.e., employment and leisure) on academic outcomes (i.e., well-being, study attitude, and academic performance) among 230 undergraduates. A series of hierarchical regression analyses show that spending too much time in both employment and leisure activities has negative relations with undergraduates’ academic outcomes. Work–study interference fully mediated the effect of time engagement in student employment on students’ reported well-being. These findings support a conflict perspective on multiple role engagement. However, results also show positive effects of activities depending on job demand and autonomy and level of autonomous motivation to engage in these activities. We conclude that out-of-school activities can be beneficial for students’ academic outcomes and preparation for the labor market when perceived as relevant for their academic study and performed in a balanced, autonomous way.

After-school engagements in employment and leisure have become major activities in students’ lives. One of the most noticeable trends in employment has been employers’ rising expectations of newly recruited graduates. Not surprisingly, students are strongly encouraged to gain work experience well before graduation to facilitate school-to-work transition and to gain a competitive advantage on the labor market (Davies, 2000). In the United States, for instance, an estimated 80% of students are employed at some point before they leave high school, with 46% working more than 20 hours a week; the estimated number of working undergraduates ranges from 24% to 64% (Little et al., 2002 and Zierold et al., 2005). Student employment, however, has also been associated with lower study investment, lower academic performance, and greater psychological and somatic distress (Steinberg & Dornbush, 1991). This may—paradoxically—impair career opportunities since graduates are also assessed by educational achievements (Rynes, Orlitsky, & Bretz, 1997). In this study, we investigated how employment and extracurricular activities relate to undergraduates’ academic outcomes. Whereas previous studies mainly investigated the quantity of engagement, the present research focused also on the quality of this engagement. Using theories of job design, role-conflict, and motivation, we investigated whether (a) type of activity (work vs. leisure), (b) work–study conflict, (c) quality of work, and (d) motivation to engage in activities, may explain the relation of time investment to undergraduates’ study attitude (SA), well-being (W), and academic performance (AP). The Dynamics of Action theory (Atkinson & Birch, 1970) posits that any change from one particular activity to another expresses a change in the strength of underlying behavioral tendencies, which interfere with the engagement and persistence in that particular activity. According to this theory, students’ engagement in one particular activity (e.g., studying) will depend on their motivation and interest in alternative activities (e.g., working or relaxing). For instance, Lens, Lacante, Vansteenkiste, and Herrera (2005) showed that undergraduates’ working hours were inversely related to their study motivation, study attitude, and academic achievement; effects were most negative when students worked excessively long hours. Much like the Dynamics of Action theory, the Conservation of Resources theory (Hobfoll, 2001) posits that people want to conserve the quantity and quality of their resources (i.e., time, energy): While performing multiple tasks, one may lose resources, which in turn may lead to underperformance and distress (Kahn, Wolfe, Quinn, Snoek, & Rosenthal, 1964). The conflict perspective on multiple role engagement, as suggested by both of these theories, predicts a linear, negative relation between the quantity of engagement in out-of-school activities and study attitude, performance and well-being. This negative effect, however, is not consistently found in the literature (e.g., Barling et al., 1995 and Lens et al., 2005). Fifty years ago, Super (1957) postulated that multiple life roles (e.g., work, leisure) can foster adaptability in human development (Hartung, 2002). However, there is scant literature on the effects of the quality of work and leisure activities on undergraduates’ academic outcomes. The primary purpose of this study, therefore, was to investigate the relationship between activity engagement and academic outcomes to a further extent, taking into consideration both the quantity and quality of engagement. Fig. 1 provides an overview of the hypothesized relations.

Our study findings suggest involvement in out-of-school activities can interfere with study attitude and well-being, but this relationship varied according to the type of activities students were involved in. The relation was negative for working time; however, inversed U-shaped relations were found for leisure time. While the linear, negative relation with working time is best predicted from conflict theories like the Dynamics of Action and Conservation of Resources theories, the curvilinear trend between leisure time and outcome variables is better explained by theories on role accumulation (e.g., Greenhaus & Powell, 2006; Warr’s vitamin model, 1987). Whereas multiple roles may lead to negative spillover, role accumulation theories also stress positive interdependencies between roles. That is, role accumulation can provide resources that buffer negative consequences of a stressor in one particular role (e.g., working) and enrich/improve the quality of life in another role (e.g., produce positive spillover in one’s study). In line with the Conservation of Resources model, the detrimental effect of working hours on students’ well-being was fully mediated by their perceived work–study interference, supporting the idea that the quality of engagement (i.e., perceived role-conflict) may be as important as the quantity of engagement in out-of-school activities for well-being. No mediation was found for academic performance and study attitude, suggesting the need to investigate other possible mechanisms. We found positive spillover effects of working and leisure activities on academic outcomes. First, both autonomy-supportive job contexts and students’ autonomous work motivation related positively to study attitude and well-being, indicating the importance of autonomy, either as a situational-induced characteristic or a personal-motivational force. Also moderating effects of autonomous motivation were found such that study attitudes and performance benefited more when working hours was combined with high autonomous motivation to perform the job. Study attitudes were most positive when low working hours were combined with high demands and high working hours were combined with low demands. While jobs with a high amount of working hours and high demands may create role-conflict, non-demanding jobs could also detract one’s interest and attention from less attractive action alternatives (like studying). Indeed, study attitude was also low when both job demands and amount of working time were low. We speculate this type of student to be the overall unengaged student that is not engaged in work or school. Second, for leisure activities, we also found positive spillover effects. Specifically, study attitudes and well-being were higher if leisure activities were performed in a more autonomous way. Further research could investigate whether autonomous motivation may moderate work–study and leisure–study conflicts since role-conflicts may also depend on the amount of autonomy perceived in these activities (see Hofer et al., 2007 and Senécal et al., 2003). Finally, perceived relevance of work related positively to study attitude, as suggested by Mortimer et al., 1992 and Valentine et al., 2002, but perceived relevance of leisure, however, did not relate to any of the outcome variables. We measured relevance of leisure and work activities for study and academic career; hence, the focus might have been on “academic learning”. Tinsley, Hinson, Tinsley, and Holt (1993), for instance, showed that work experiences are more frequently described as providing accomplishment and learning whereas leisure experiences as providing enjoyment, companionship and distraction (see also Bordin, 1994 and Kelly and Kelly, 1994). Thus, leisure activities may be valuable for other reasons than academic learning, such as relaxing. Also, when students advance in their study, they may develop a different set of criteria for what is useful for their academic career and these effects might become much stronger as they make more fine-tuned distinctions.