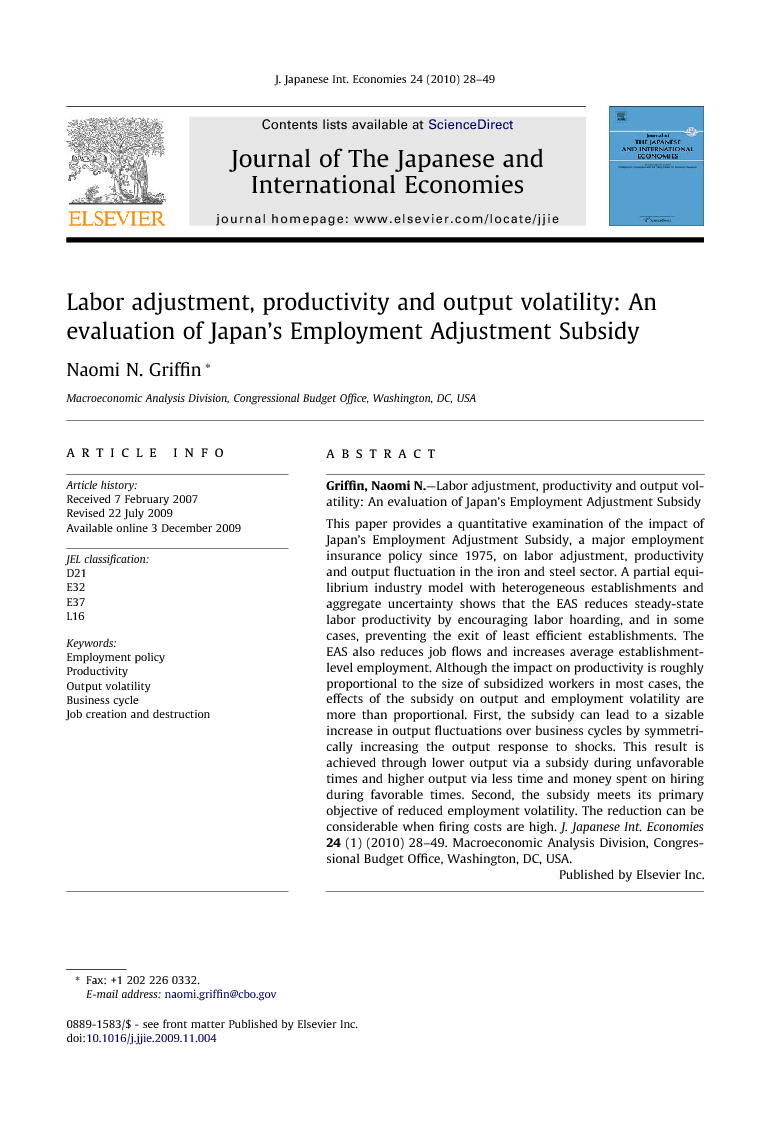 This paper provides a quantitative examination of the impact of Japan’s Employment Adjustment Subsidy, a major employment insurance policy since 1975, on labor adjustment, productivity and output fluctuation in the iron and steel sector. A partial equilibrium industry model with heterogeneous establishments and aggregate uncertainty shows that the EAS reduces steady-state labor productivity by encouraging labor hoarding, and in some cases, preventing the exit of least efficient establishments. The EAS also reduces job flows and increases average establishment-level employment. Although the impact on productivity is roughly proportional to the size of subsidized workers in most cases, the effects of the subsidy on output and employment volatility are more than proportional. First, the subsidy can lead to a sizable increase in output fluctuations over business cycles by symmetrically increasing the output response to shocks. This result is achieved through lower output via a subsidy during unfavorable times and higher output via less time and money spent on hiring during favorable times. Second, the subsidy meets its primary objective of reduced employment volatility. The reduction can be considerable when firing costs are high.

This paper has examined the effects of the EAS, Japan’s major employment insurance program, on average productivity, employment, and the volatility of output and employment over the business cycle, through the examination of the iron and steel industry. The partial equilibrium model described in this paper shows that the subsidy reduces average productivity primarily by increasing the number of unutilized workers. The subsidy could further reduce average productivity by interfering with the process of job reallocation and preventing the exit of the least efficient establishments. Furthermore, simulation exercises reveal that the subsidy may have a much larger impact on the volatility of output and employment. In particular, when firing costs are high, the subsidy increases output volatility by 3% and reduces employment volatility by a quarter over the business cycles, even when the fraction of subsidized workers is about 2%. While measures such as productivity and employment/output volatility are often used to evaluate welfare, I do not intend to draw a normative conclusion on the welfare effect of the subsidy program. Nevertheless, I believe that the implications highlighted in this exercise are important ones, providing policymakers a better understanding of the program and allowing them to more successfully target their policy objectives. Here, I raise a couple of issues for a more complete welfare assessment. First, the paper predicts that the subsidy increases output volatility while reducing employment volatility. Consequently, an assessment of the policy requires an analysis of the cost of output volatility and the benefits of employment stability.49 Second, while some labor market imperfections are assumed for subsidy take-up to take place (i.e., firing restrictions and rigid wage), this paper does not address how the subsidy program may enhance or reduce labor market imperfections.50 The analysis presented here raises several additional issues for further investigation. First, since the quantitative impact of the subsidy on the volatility of output and employment is sensitive to the magnitude of labor adjustment costs, it will be important to quantify these costs accurately to evaluate the potential impact of the subsidy program. Second, the analysis treated the iron and steel industry as an independent economy with no interaction with other industries. New policy implications may arise if inter-industry interactions between high productivity sectors and low productivity sectors are present in the model.51 Third, it seems worthwhile to investigate why the subsidy was so heavily concentrated in the iron and steel sector. Finally, employment volatility during the severe recession of the 1990s was surprisingly mild in Japan compared to other industrial nations, despite the fact that EAS coverage was highly concentrated in certain sectors of the economy.52 It would be worthwhile to investigate other factors that contributed to the stability of employment.