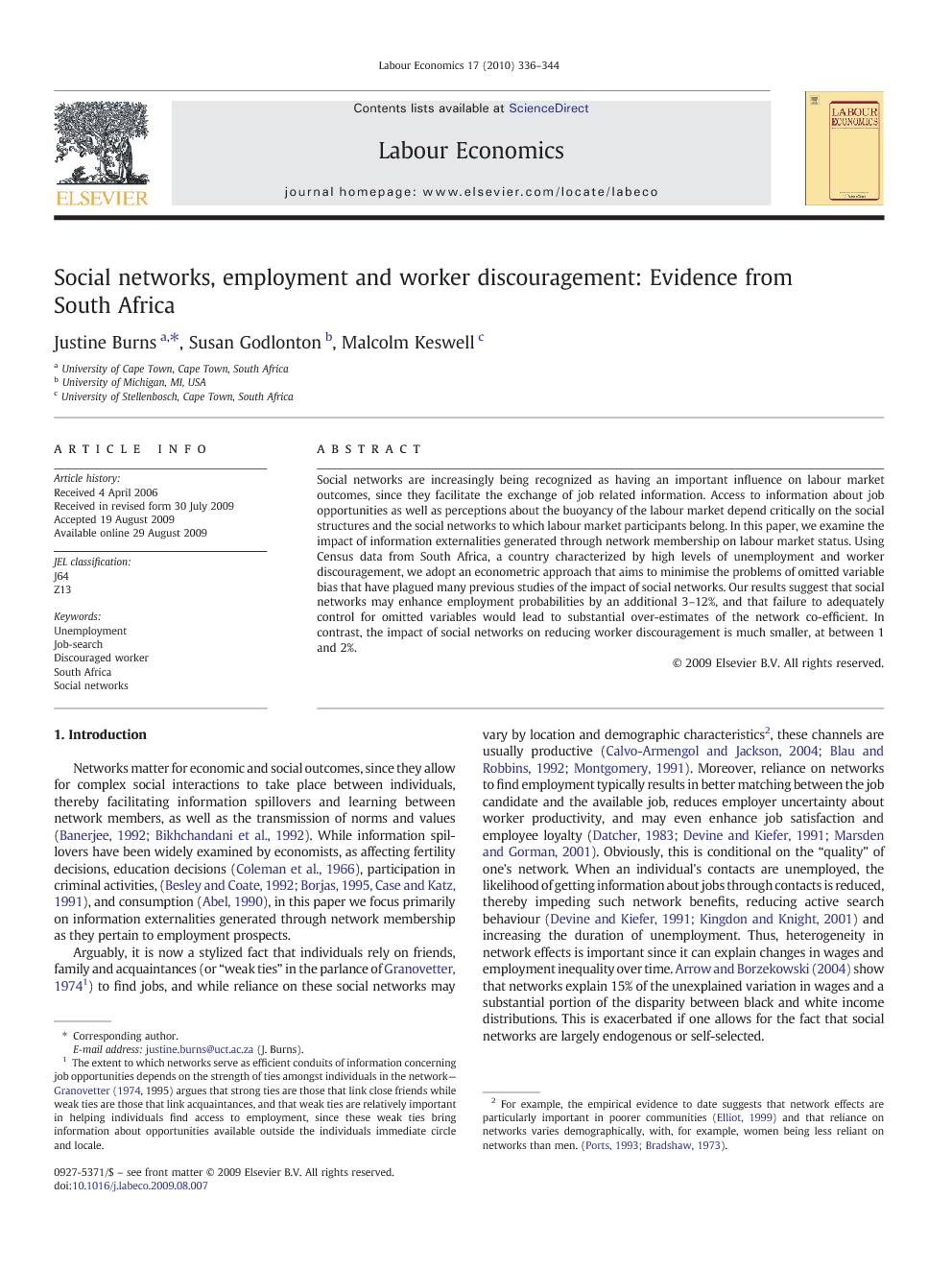 Social networks are increasingly being recognized as having an important influence on labour market outcomes, since they facilitate the exchange of job related information. Access to information about job opportunities as well as perceptions about the buoyancy of the labour market depend critically on the social structures and the social networks to which labour market participants belong. In this paper, we examine the impact of information externalities generated through network membership on labour market status. Using Census data from South Africa, a country characterized by high levels of unemployment and worker discouragement, we adopt an econometric approach that aims to minimise the problems of omitted variable bias that have plagued many previous studies of the impact of social networks. Our results suggest that social networks may enhance employment probabilities by an additional 3–12%, and that failure to adequately control for omitted variables would lead to substantial over-estimates of the network co-efficient. In contrast, the impact of social networks on reducing worker discouragement is much smaller, at between 1 and 2%.

In this paper, we have presented estimates of the magnitude of social networks on employment probabilities and worker discouragement, controlling for as many sources of omitted variable bias as possible. Our results illustrate the importance of properly controlling for omitted variable bias in this type of work, since failure to do so clearly results in an overstatement of the magnitude of the network effects. Even after controlling for various fixed effects and controls for personal and household characteristics, our network co-efficients remain significant, although they have a substantially smaller impact on reducing the incidence of worker discouragement amongst the unemployed than they do on affecting employment probabilities. Indeed, our results suggest to us that there is a lot about worker discouragement that remains unexplained through the usual socio-economic analysis, and may point to the need for a more psychologically grounded behavioural analysis in order to explain this phenomenon more fully. Secondly, while it is clear that informational externalities provided through other employed adult household members are important for enhanced job prospects, information and job opportunities acquired through this means accounts for only a small proportion of the measured social network effect, suggesting an equally important role for “weaker ties” within the social network. However, at the same time, our results also suggest that informational externalities provided through other employed adult household members do not affect the incidence of discouragement among unemployed individuals. This is a phenomenon worthy of further investigation. Our results confirm that the importance of social networks in terms of employment probabilities and in affecting worker discouragement varies demographically. Social networks significantly enhance employment prospects for women, for individuals who did not relocate in the 1996–2001 period, and for those with access to telephones. In contrast, social networks appear to significantly reduce worker discouragement amongst individuals who did relocate in the 1996–2001 period, and those with access to telephones. However, it is important to note that the absence of a significant network effect for specific groups of individuals in our results may reflect lower usage of networks by the specified group to find jobs or to gather information about jobs, but it could also reflect differences in the likelihood of the individual in the specific group being made a job offer for jobs that one hears of through word-of-mouth. It is also the case that employer characteristics will determine to some extent the context in which different types of job search methods operate. In some cases, worker characteristics may be easily observable, while in other cases, recommendations from existing employees may be especially important or valuable. The strength of network effects will vary in these circumstances. In addition, job seekers may vary in terms of their contact availability and in terms of the quality of their networks. In other words, the impact of the social network on individual outcomes depends not only on the size and quality of the network, but also on whether the individual is able to access it effectively. For example, migrants may have greater difficulty accessing the social network since they are relative newcomers to the area, and it is perhaps unsurprising that social networks have smaller effects on the employment probabilities of those individuals who had relocated. However, social networks significantly reduce worker discouragement for those who did relocate. Since it is plausible that these individuals may have relocated to look for work, it is unsurprising that they are significantly more likely to be engaged in active job search. This suggests to us that individuals who move away from their own age–language cohorts may well be qualitatively different from those who stay behind, and again underscores the importance of trying to control for this source of bias in network studies. In this paper, we do not identify the specific ways in which the effectiveness of social networks depend on differences in the characteristics of job seekers, in the characteristics of the contacts they use, or the relationship between job seekers and their contacts and features of the job environment. We simply document the existence of network effects for various groups. Thus, a large number of questions remain unanswered, and in the absence of more detailed survey information of job search and recruitment methods, may remain so. Providing convincing explanations for the difference in magnitude of network effects for different groups is an example of one such question. For example, is it that groups that rely more heavily on social networks to access employment opportunities or gather job information do so because they have skills which are difficult to observe, with the result that employers rely more heavily on social networks in their hiring decisions, or is it that these groups face explicit labour market discrimination in formal hiring processes and thus, have to rely on networks to access employment. Or is it that some groups, for example women, gain more from their social networks than men because their contacts have better information about job opportunities and do a better job of passing this information on. Moreover, while our statistics describing the sample characteristics suggest that some age–language cohorts may find it more difficult to access opportunities in the labour market than others, an unanswered question is whether ethno-linguistic job niches exist in the South African labour market, in much the same way as documented by Waldinger and Bailey (1991) for the USA. To the extent that such ethno-linguistic niches exist, this will reinforce the importance of social ties in job search and employment prospects, but may also serve to inhibit social mobility. Arguably, understanding these kinds of dynamics, which will hinge critically on collecting better data on social networks, will contribute substantially to a better understanding of the complexities inherent in the South African labour market.