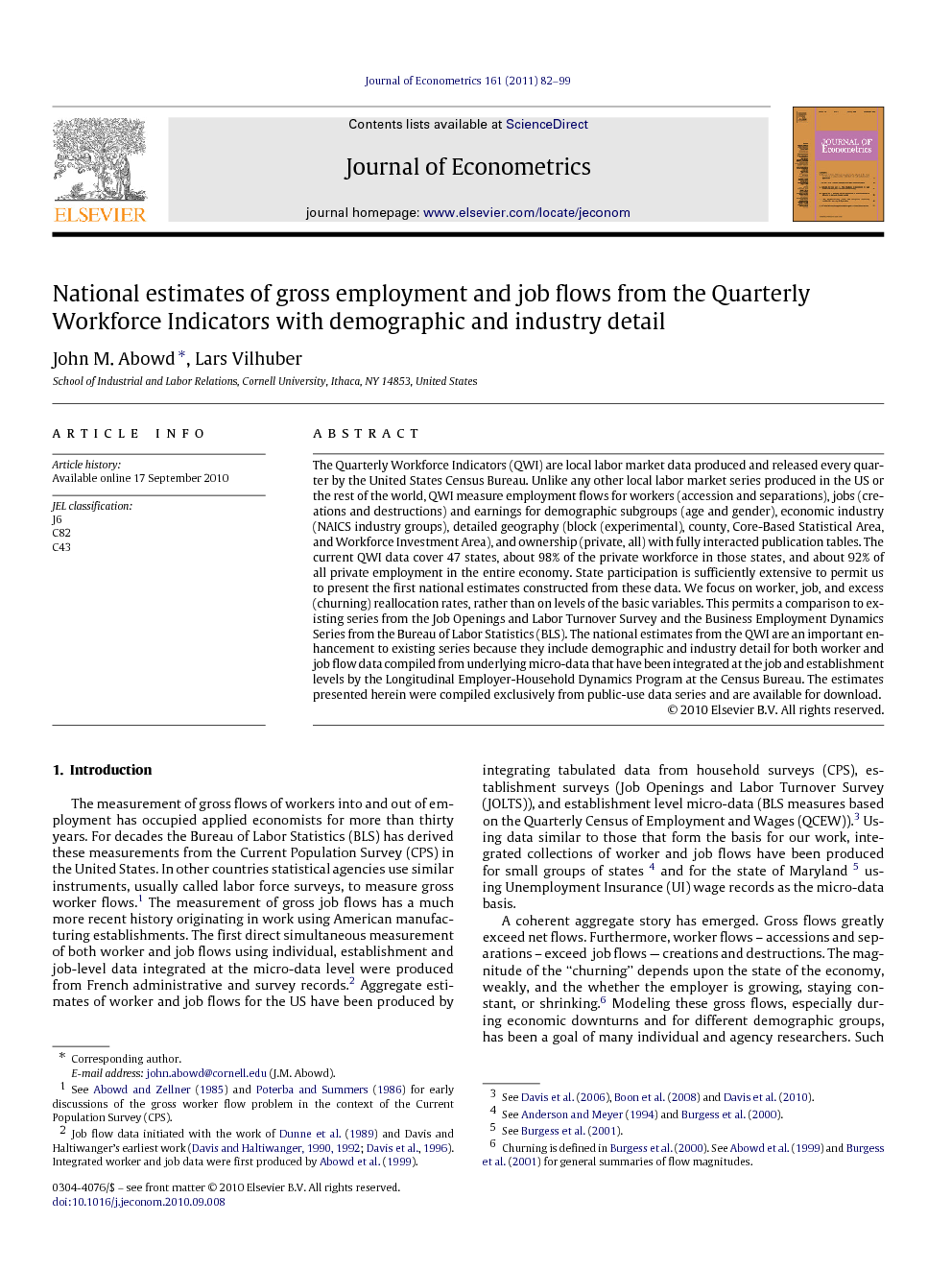 The Quarterly Workforce Indicators (QWI) are local labor market data produced and released every quarter by the United States Census Bureau. Unlike any other local labor market series produced in the US or the rest of the world, QWI measure employment flows for workers (accession and separations), jobs (creations and destructions) and earnings for demographic subgroups (age and gender), economic industry (NAICS industry groups), detailed geography (block (experimental), county, Core-Based Statistical Area, and Workforce Investment Area), and ownership (private, all) with fully interacted publication tables. The current QWI data cover 47 states, about 98% of the private workforce in those states, and about 92% of all private employment in the entire economy. State participation is sufficiently extensive to permit us to present the first national estimates constructed from these data. We focus on worker, job, and excess (churning) reallocation rates, rather than on levels of the basic variables. This permits a comparison to existing series from the Job Openings and Labor Turnover Survey and the Business Employment Dynamics Series from the Bureau of Labor Statistics (BLS). The national estimates from the QWI are an important enhancement to existing series because they include demographic and industry detail for both worker and job flow data compiled from underlying micro-data that have been integrated at the job and establishment levels by the Longitudinal Employer-Household Dynamics Program at the Census Bureau. The estimates presented herein were compiled exclusively from public-use data series and are available for download.

The measurement of gross flows of workers into and out of employment has occupied applied economists for more than thirty years. For decades the Bureau of Labor Statistics (BLS) has derived these measurements from the Current Population Survey (CPS) in the United States. In other countries statistical agencies use similar instruments, usually called labor force surveys, to measure gross worker flows.1 The measurement of gross job flows has a much more recent history originating in work using American manufacturing establishments. The first direct simultaneous measurement of both worker and job flows using individual, establishment and job-level data integrated at the micro-data level were produced from French administrative and survey records.2 Aggregate estimates of worker and job flows for the US have been produced by integrating tabulated data from household surveys (CPS), establishment surveys (Job Openings and Labor Turnover Survey (JOLTS)), and establishment level micro-data (BLS measures based on the Quarterly Census of Employment and Wages (QCEW)).3 Using data similar to those that form the basis for our work, integrated collections of worker and job flows have been produced for small groups of states 4 and for the state of Maryland 5 using Unemployment Insurance (UI) wage records as the micro-data basis. A coherent aggregate story has emerged. Gross flows greatly exceed net flows. Furthermore, worker flows–accessions and separations–exceed job flows — creations and destructions. The magnitude of the “churning” depends upon the state of the economy, weakly, and the whether the employer is growing, staying constant, or shrinking.6 Modeling these gross flows, especially during economic downturns and for different demographic groups, has been a goal of many individual and agency researchers. Such modeling forms the basis for recent work at the BLS 7 where the principle difficulty remains an inability to measure all of the flows at the same consistent microeconomic level — that of the job or employer. Only the estimates based on French employers and those using employers operating in the state of Maryland provide fully integrated microeconomic data approaches in which all of the relevant flows are measured using micro-data at the job level. When the US Census Bureau began publishing the QWI in 2003, it marked the first time that an American statistical agency had attempted to provide labor force stock, flow, and earnings data from a consistent, integrated job-level source. The system is based on the integration of demographic, economic and job-level data using state-level UI and QCEW micro-data linked to Census Bureau censuses and surveys on households and businesses (Abowd et al., 2004). At first, there were only 18 participating states, representing about 30% of the US labor force. By 2009, all but two states (Massachusetts and New Hampshire) had joined the Local Employment Dynamics (LED) Federal/State Partnership that provides the data. Current published QWI data cover 92% of private non-farm employment. Since the system was designed to provide consistent stock and flow information at very detailed geographic, industrial and demographic detail, the fact that participation by states was not universal was not seen as a serious drawback. However, now that participation is essentially universal, this paper constructs national estimates, for the first time, using the same industrial and demographic detail that characterizes the original QWI publication. In addition, this paper provides evidence on the statistical reliability of the national QWI estimates and on their sensitivity to missing state data. In Section 2, we describe the basic public-use data sources that form the core of our national gross flow estimates. Section 3 provides the formulae for our worker, job, and excess reallocation rates and their components. We also describe the series from the QCEW, Business Employment Dynamics (BED), and JOLTS that we use for comparison and imputation, where needed. Section 4 describes how we handled the incomplete QWI data in forming national rates. Section 5 presents our results in both tabular and graphical form. We conclude in Section 6.

Using similar data for the 1990s and a single state (Maryland), Burgess et al. (2000) estimated that the Excess Reallocation Rate (churning) for manufacturing was 11% while that of non-manufacturing sectors was 19%. Using national data for the period from 1993:Q11993:Q1 through 2008:Q32008:Q3., our estimated Excess Reallocation Rate for manufacturing is 17% while the overall rate is 36%. Nationally representative data thus indicate that overall churning is considerably greater than those authors estimated. However, they also estimated that the excess reallocation rates were over 70% of the Worker Reallocation Rates in non-manufacturing and 46% of Worker Reallocation Rates in manufacturing. The non-manufacturing estimate holds up pretty well in nationally representative data. We estimate that the excess reallocation rate (churning) is 73% of the worker reallocation rate nationally over our time period, and not dominated by a trend. In manufacturing, churning is 67% of the worker reallocation rate, which is not as different from non-manufacturing as they found for the state of Maryland. The only other attempts to estimate national Worker Reallocation Rates, (Davis et al., 2006 and Boon et al., 2008), appear to suffer from a serious underestimation bias due to the design of the JOLTS sampling frame and nonrepresentativeness of the reports of large establishments, as described in Davis et al. (2010). We document the magnitude of this bias by showing that our nationally representative worker reallocation rate is, at 49%, more than double the 19% quarterly rate estimated by Davis et al. (2006). Given the demonstrated similarity between our Job Reallocation Rates and those estimated from the BED when they can be compared, it seems reasonable to conclude that our worker reallocation rates, based on the same QWI data as our job reallocation rates, are more representative of the overall private economy than the JOLTS estimates. As already noted, the national Job Reallocation Rate based on QWI inputs shows a similar level, trend, and seasonality to the job reallocation rate based on the BED as described in Spletzer et al. (2004) and Davis et al. (2006). The demonstrated contribution from estimating Job Reallocation Rates from the QWI is that they are accurate enough to permit estimation at the national NAICS sector × age × gender level, thus permitting estimation and forecasting, for the first time, of the interaction between the demographic characteristics and industrial sector. Our figures indicate that job and excess reallocation rates are not very different by gender but, as anticipated, vary enormously by age group, and by age group across industrial sectors. We have created national gross worker and job flow statistics for the period from 1993:Q11993:Q1 through 2008:Q32008:Q3, characterizing worker flows by the Worker Reallocation Rate and job flows by the job reallocation rate. Our methods demonstrate that the Census Bureau’s Quarterly Workforce Indicators can reliably estimate these rates to two significant digits at the national level. Fully saturated estimates by NAICS sector, gender and age group were produced. The incompleteness of the QWI data, which arises from the fact that different states joined the LED Federal/State Partnership at different dates and with historical data of different longevity, does not materially affect the quality of the national QWI data. The national estimates from the QWI are an important enhancement to existing series because they include demographic and industry detail for worker and job flows compiled from underlying micro-data that have been consistently integrated by the Longitudinal Employer-Household Dynamics Program at the Census Bureau. The estimates produced for this paper were compiled exclusively from public-use data series and are available for download.