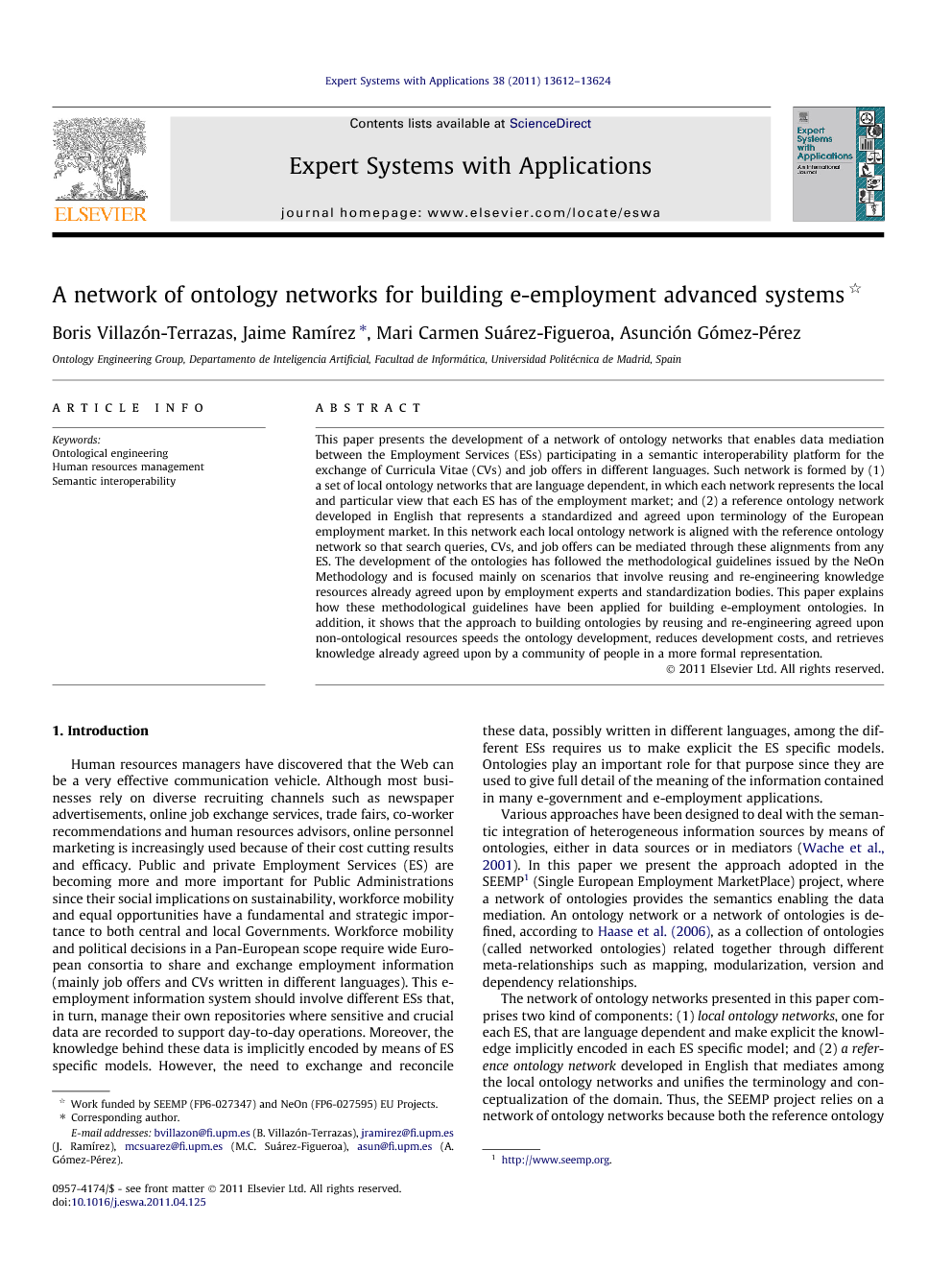 This paper presents the development of a network of ontology networks that enables data mediation between the Employment Services (ESs) participating in a semantic interoperability platform for the exchange of Curricula Vitae (CVs) and job offers in different languages. Such network is formed by (1) a set of local ontology networks that are language dependent, in which each network represents the local and particular view that each ES has of the employment market; and (2) a reference ontology network developed in English that represents a standardized and agreed upon terminology of the European employment market. In this network each local ontology network is aligned with the reference ontology network so that search queries, CVs, and job offers can be mediated through these alignments from any ES. The development of the ontologies has followed the methodological guidelines issued by the NeOn Methodology and is focused mainly on scenarios that involve reusing and re-engineering knowledge resources already agreed upon by employment experts and standardization bodies. This paper explains how these methodological guidelines have been applied for building e-employment ontologies. In addition, it shows that the approach to building ontologies by reusing and re-engineering agreed upon non-ontological resources speeds the ontology development, reduces development costs, and retrieves knowledge already agreed upon by a community of people in a more formal representation.

Human resources managers have discovered that the Web can be a very effective communication vehicle. Although most businesses rely on diverse recruiting channels such as newspaper advertisements, online job exchange services, trade fairs, co-worker recommendations and human resources advisors, online personnel marketing is increasingly used because of their cost cutting results and efficacy. Public and private Employment Services (ES) are becoming more and more important for Public Administrations since their social implications on sustainability, workforce mobility and equal opportunities have a fundamental and strategic importance to both central and local Governments. Workforce mobility and political decisions in a Pan-European scope require wide European consortia to share and exchange employment information (mainly job offers and CVs written in different languages). This e-employment information system should involve different ESs that, in turn, manage their own repositories where sensitive and crucial data are recorded to support day-to-day operations. Moreover, the knowledge behind these data is implicitly encoded by means of ES specific models. However, the need to exchange and reconcile these data, possibly written in different languages, among the different ESs requires us to make explicit the ES specific models. Ontologies play an important role for that purpose since they are used to give full detail of the meaning of the information contained in many e-government and e-employment applications. Various approaches have been designed to deal with the semantic integration of heterogeneous information sources by means of ontologies, either in data sources or in mediators (Wache et al., 2001). In this paper we present the approach adopted in the SEEMP1 (Single European Employment MarketPlace) project, where a network of ontologies provides the semantics enabling the data mediation. An ontology network or a network of ontologies is defined, according to Haase et al. (2006), as a collection of ontologies (called networked ontologies) related together through different meta-relationships such as mapping, modularization, version and dependency relationships. The network of ontology networks presented in this paper comprises two kind of components: (1) local ontology networks, one for each ES, that are language dependent and make explicit the knowledge implicitly encoded in each ES specific model; and (2) a reference ontology network developed in English that mediates among the local ontology networks and unifies the terminology and conceptualization of the domain. Thus, the SEEMP project relies on a network of ontology networks because both the reference ontology and the local ontology are ontology networks by themselves. Furthermore, the whole e-employment ontology network is the result of putting together the reference ontology network and the local ontology networks, and defining a set of alignments or semantic mappings between each local ontology network and the reference ontology network. In the last few years, and within the context of the NeOn project2 a scenario-based methodology, called the NeOn Methodology, has been developed. This methodology aims to build ontology networks by reusing and re-engineering knowledge resources. The development of the SEEMP ontologies has required several reverse engineering processes that take advantage of the existence of non-ontological resources already agreed on either in each local ES or in the European scope in the form of standards. The fact that a consensus in the terminology defined by a non-ontological resource has been reached must not be underestimated since this consensus helps to reduce development costs drastically. The NeOn Methodology (Suárez-Figueroa, 2010) provides detailed methodological guidelines for the different processes and activities involved in the ontology network development process. This paper shows how the NeOn Methodology has been applied successfully in the development of the SEEMP ontology networks. More concretely, the SEEMP prototype has required the development of a reference ontology network and two local ontology networks (for Telmi ES and EURES ES, respectively). In addition, in this paper we have tried to demonstrate that the approach to building ontologies by reusing and re-engineering agreed upon non-ontological resources allows building ontologies faster and with less resources. Moreover, another advantage of this approach is that the ontologies built in this way can reach an immediate consensus. The remaining of the paper is organized as follows: Section 2 presents the goals of the SEEMP project and outlines the proposed interoperability architecture. Section 3 summarizes the NeOn Methodology and emphasizes those aspects most relevant for the development of the SEEMP ontology networks. Section 4 shows how the NeOn guidelines have been applied in building the SEEMP ontologies. Section 5 presents our conclusions and the final section focuses on new lines of research derived from this work.

This paper presents the development of the network of ontology networks that enables data mediation between ESs participating in an e-employment advanced system. This system relies on a semantic interoperability platform for dealing with heterogeneous information both in form and language. The ontology-based solution here proposed to build this complex system uses a network of ontology networks that combines a RO network and several local ontology networks. The network of ontology networks provides the semantics that enables the data mediation. Following this approach, the SEEMP consortium implemented a prototype, formed by the interoperability platform and three fully integrated ESs, capable of dealing with thousands of real CVs and JOs in the IT domain. At the end of the project, this prototype and the ontologies were evaluated (SEEMP Consortium, 2008) by the user partners with satisfactory results, and thus the technical approach adopted was validated. Regarding the ontology construction, our experience in SEEMP has served us to demonstrate that the approach to building ontologies by reusing and re-engineering existing and already agreed upon non-ontological resources permits to build ontologies faster and with less resources; moreover, as a result of reusing resources, the ontologies can reach an immediate consensus and become reference ontologies in their respective domains. Unlike previous e-employment ontologies that were built to be exploited in a regional or a national scope, the RO network here proposed was designed to support interoperability in a European scope. In addition, we must highlight that the RO network is publicly available and provides a richer vocabulary for representing JOs and CVs in the IT domain than previous e-employment ontologies. The expressiveness of the RO network was considered a critical issue in SEEMP, since the greater the expressiveness, the lower loss of information in the mediation process. With respect to the application of the NeOn Methodology, we think that this methodology was especially useful for guiding the steps of the ontological engineers involved since it provides detailed and sufficient guidelines. In fact, we think that this methodology will be really valuable for guiding junior engineers who lack previous experience in building an ontology network, specifically if the network needs to be solidly grounded in NORs. In addition, we think that the existence of a well-defined and structured process for building the ontology network eases the planning, coordination and communication with other non Semantic Web members of the development team, which in turn helps to convey confidence in the final result. It is also worth highlighting that the reuse scenarios posed by the NeOn Methodology has been put in practice for building a really huge network of ontology networks. This, in our opinion, strengthens the validity of our conclusions about the applicability of the NeOn Methodology. In order to illustrate the dimension of the ontologies and the effort performed by the ontological engineers for building them, we outline some data in Table 3 and Table 4.The size of these ontologies deserve a clarification. Most of the concepts, instances and axioms have been generated automatically by using wrappers, as was explained in Section 5. With respect to the data related to effort, it must be said that they include, for each ontology, the effort related to the whole life cycle, i.e., from the ontology requirements specification activity to the implementation activity. In particular, in the case of the RO network effort, it must be added that at least 2 MM were dedicated to the ontology specification activity (including the most intensive phase of the knowledge acquisition). In our opinion, a good ORSD helps to reduce the effort in the remaining activities of the ontology development; therefore, it is essential to dedicate a significant amount of time to this activity. If we compare the effort required, on one hand, by the application ontologies, and on the other hand, by the domain ontologies, we can observe a significant difference. Basically, the reason of this difference is that there are in the ontologies between three and seven different domain ontologies (occupation, economic activity, education levels, etc.), whilst there are just two application ontologies (job seeker and job offer ontologies). Thus, although an application ontology requires more effort than a domain ontology, the largest number of domain ontologies justifies that difference. In addition, it is remarkable the difference between the effort for building the RO network (6 MM), and the effort for building the local ontology networks (0.75 MM and 0.6 MM). This difference exists because (1) most of the knowledge acquisition on human resources management was performed when building the RO network; and (2) when building the local ontology networks, a significant part of the RO network was reused, not only at the implementation level in form of ontology terms existing in the RO network, but also at the design level because of the architecture of the local ontology networks is very similar to the architecture of the RO network. Another important conclusion drawn from our experience is that it would have been impossible to achieve such low effort without the NeOn Methodology scenarios for reusing. These scenarios provided us some clear and detailed guidelines of the activities to carry out in each phase of the ontology network construction. At this point, it must be pointed out that no other work related to the construction of an e-employment ontology has provided as detailed guidelines on the development process as we have done in this paper.