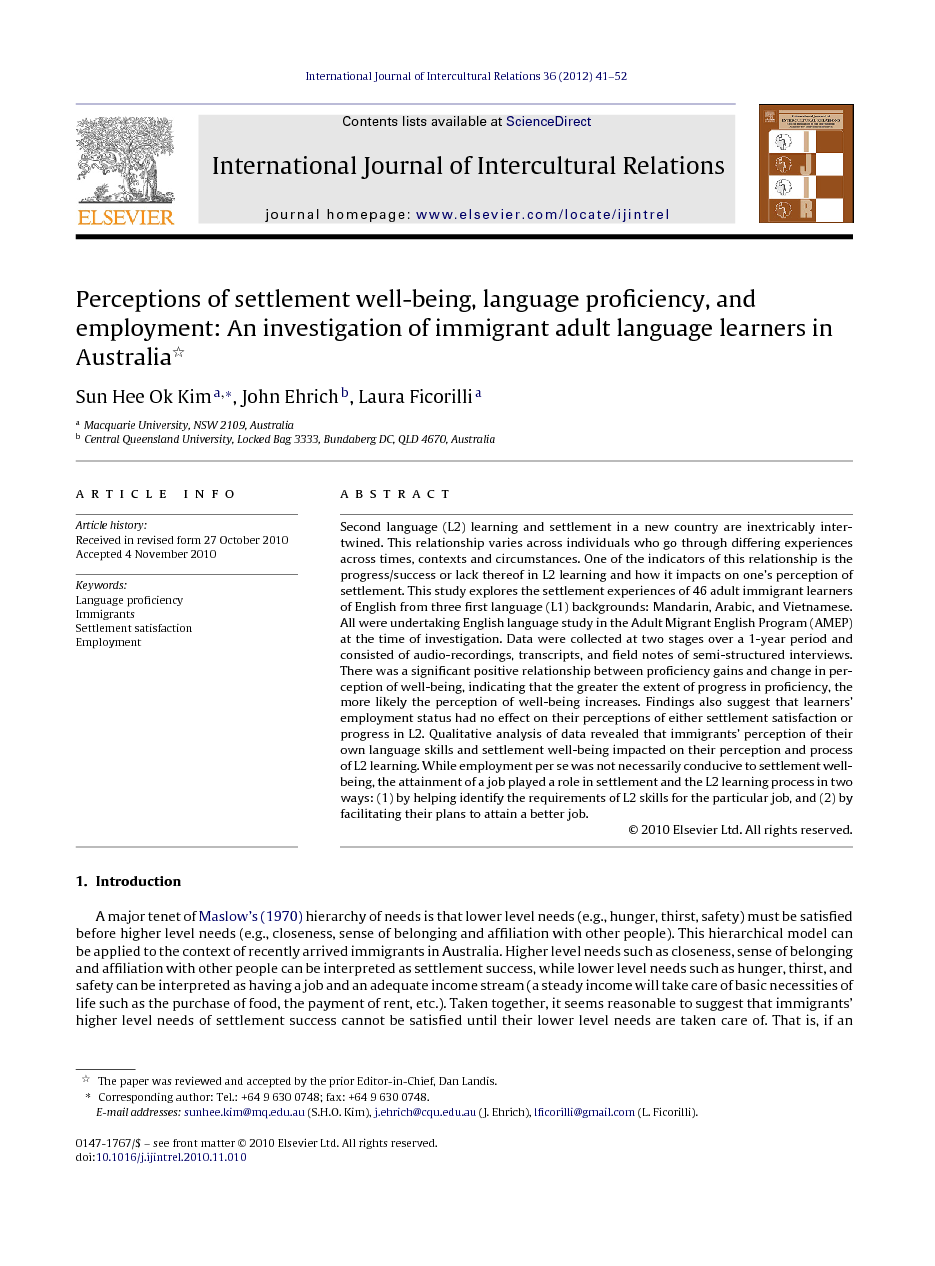 Second language (L2) learning and settlement in a new country are inextricably intertwined. This relationship varies across individuals who go through differing experiences across times, contexts and circumstances. One of the indicators of this relationship is the progress/success or lack thereof in L2 learning and how it impacts on one's perception of settlement. This study explores the settlement experiences of 46 adult immigrant learners of English from three first language (L1) backgrounds: Mandarin, Arabic, and Vietnamese. All were undertaking English language study in the Adult Migrant English Program (AMEP) at the time of investigation. Data were collected at two stages over a 1-year period and consisted of audio-recordings, transcripts, and field notes of semi-structured interviews. There was a significant positive relationship between proficiency gains and change in perception of well-being, indicating that the greater the extent of progress in proficiency, the more likely the perception of well-being increases. Findings also suggest that learners’ employment status had no effect on their perceptions of either settlement satisfaction or progress in L2. Qualitative analysis of data revealed that immigrants’ perception of their own language skills and settlement well-being impacted on their perception and process of L2 learning. While employment per se was not necessarily conducive to settlement well-being, the attainment of a job played a role in settlement and the L2 learning process in two ways: (1) by helping identify the requirements of L2 skills for the particular job, and (2) by facilitating their plans to attain a better job.

A major tenet of Maslow's (1970) hierarchy of needs is that lower level needs (e.g., hunger, thirst, safety) must be satisfied before higher level needs (e.g., closeness, sense of belonging and affiliation with other people). This hierarchical model can be applied to the context of recently arrived immigrants in Australia. Higher level needs such as closeness, sense of belonging and affiliation with other people can be interpreted as settlement success, while lower level needs such as hunger, thirst, and safety can be interpreted as having a job and an adequate income stream (a steady income will take care of basic necessities of life such as the purchase of food, the payment of rent, etc.). Taken together, it seems reasonable to suggest that immigrants’ higher level needs of settlement success cannot be satisfied until their lower level needs are taken care of. That is, if an immigrant lacks a job and has limited access to funds then it is likely that she/he is not in a position to fulfil higher level needs and feel settled in her/his host community. For example, in a study of 42 immigrant Somali women in Australia, McMichael and Manderson (2004) found that a lack of employment opportunities meant immigrants were completely dependent on a small living allowance provided by the government (fortnightly unemployment benefit payments). Such a living allowance covered only the most rudimentary living expenses and prohibited expenditure on more socially oriented activities. Consequently, many Somali women were isolated in their homes and were completely devoid of any support networks or social engagement. Not surprisingly, there was a high rate of depression among Somali immigrants. In other words, as the Somali women were unable to attend to their low level needs (attain a suitable income) they were unable to fulfil their higher level needs (e.g., affiliations with other people, sense of belonging in the community). One of the greatest challenges immigrants face in respect to satisfying the lower level needs of attaining a job concerns their ability (or lack thereof) to speak the target language (TL), that is, the language of their host country. Without TL skills, immigrants face significant barriers to economic and social success. In countries where English is spoken, requirements for a high level of English language proficiency, or what is perceived as ‘functional’, acts as the gatekeeper to employment (Bloch, 2002, Valtonen, 2004 and Wooden, 1994), and further education such as Technical and Further Education (TAFE) in the case of Australia and other tertiary education (Baker and Wooden, 1991 and VandenHeuvel and Wooden, 1996). Attainment of English language proficiency is also important in fulfilling higher level needs such as desire for achievement or independence in these countries where English is the language of academic achievement, professional work and general social interaction (Smolicz & Secombe, 2003). Hence, English language proficiency arguably provides the major route to immigrants’ happiness in Australia. In order to either procure a job or gain entrance into further education to facilitate employment prospects, an immigrant needs to have or to develop a high level of English language proficiency upon arrival in Australia. Attainment of a job and a steady income then enables immigrants to fulfil their higher level needs and increase opportunities to engage in Australian society and experience settlement well-being and happiness. In a nutshell, an immigrant's English language proficiency, his/her feeling of well-being, and employment are inextricably intertwined with each other. Even though prior studies have investigated immigrants’ settlement satisfaction in regard to their employment and/or language proficiency (e.g., Beiser and Hou, 2001, Chiswick et al., 2002, Colic-Peisker, 2009, Colic-Peisker and Tilbury, 2007 and Jasinskaja-Lahti, 2008), few empirical studies have explored these issues within the specific context of the Adult Migrant English Program (AMEP) in Australia (for details of the AMEP, see Ehrich et al., 2010 and Murray and McPherson, 2006). For example, prior AMEP research has mostly focused on aspects of teaching (e.g., Burns, 1996, Burns, 2003, Burns and De Silva Joyce, 2006, Burns and Hood, 1995 and Murray and McPherson, 2006), curriculum (e.g., Brindley, 2000 and Brindley and Slatyer, 2002), or settlement issues of immigrants (e.g., Colic-Peisker, 2009 and Colic-Peisker and Tilbury, 2007). While most research on immigrants has been conducted from a qualitative perspective (see Mathews-Aydinli, 2008), few AMEP studies have investigated the relationships between immigrant well-being and happiness in relation to settlement, English language proficiency and employment attainment (or lack thereof), from either quantitative or qualitative approaches. In order to fill this gap in the research, we explored the relationships between perceptions of settlement well-being, progress in English language proficiency and perceptions thereof, and employment attainment of adult immigrant language learners by adopting a mixed-method approach (Bazeley, 2009, see also Chi, 1997) drawing from a larger AMEP project. Each key variable will be discussed in turn.

Previously, we argued that immigrant happiness in the host community was largely dependent on satisfying lower level needs such as attaining a job and securing a steady income stream. We posited that only after satisfying such lower level needs are immigrants capable of satisfying higher level needs, such as feeling a sense of belonging and social participation in the host community. The basic prerequisite to fulfilling the lower level needs is English language proficiency. Without proficiency in the English language, immigrants lack the basic tools to acquire work and to participate fully in the host community. Therefore, we explored the relationships between three main variables: immigrant self-perceptions of settlement well-being (levels of happiness), employment status, and English language proficiency. Our analysis revealed the complexities of the relationships between theses variables. Consistent with our predictions we found that increased English language proficiency also increased the likelihood of settlement well-being and happiness. In other words, immigrants with greater gains in English language proficiency were more likely to experience more positive change in their feeling of happiness than those with less gains. This finding is consistent with prior research (Jasinskaja-Lahti, 2008) and highlights the urgent need of immigrants to quickly acquire English. Quite literally, their happiness depends on progress in their ability to speak English. We also predicted that immigrants with jobs would be happier than immigrants without jobs. The idea here was that those with jobs would be financially more capable of satisfying lower level needs and hence be in a better position to fulfil higher level needs. Thus their levels of happiness would increase. However, this was not found to be the case. Job attainment did not increase immigrant happiness. Furthermore, English language proficiency did not appear to have an effect on immigrant job attainment. These findings can be better understood by an examination of the quality of the jobs attained by the immigrants. English language proficiency did not appear to be a factor in the types of jobs immigrants had attained possibly because they were lower level/status jobs, as shown in our analysis. This is consistent with prior studies which have shown that immigrants tend to take on low-level jobs out of sheer survival necessity (cf., Chiswick et al., 2002, Jasinskaja-Lahti, 2008 and Stevens, 1999; see also Ehrich et al., 2010). Considering that many of the immigrants in our sample had reported being under considerable financial pressure, this seems a reasonable speculation. Importantly, such low level and low status jobs would fail to provide significant financial benefits. Therefore, it is likely that immigrants’ lower level needs of acquiring a reasonable level of income were not achieved. This may explain why those with jobs were not happier than those without. In a nutshell, the quality of the jobs attained was not high enough to pave the way towards immigrants’ fulfilment and satisfaction. These jobs failed to provide the financial opportunities necessary to meet the higher level needs of sense of belonging and worth and participation in the host community. Hence their happiness did not increase. In light of the above findings we adjust our model to include two new variables which temper immigrants’ perceptions of their settlement well-being and happiness: (1) the quality of the jobs attained and (2) their relevance to immigrants’ ultimate goals of settlement. That is, the satisfaction of lower level needs is largely dependent on the quality and/or relevance of jobs attained. Lower quality jobs provide limited financial and linguistic opportunities for immigrants to move forward to satisfy their higher level needs. We believe that higher level jobs would provide more financial opportunities to facilitate the fulfilment of higher level needs, such sense of belonging and social participation in the larger community. Furthermore, relevance of a job to their ultimate goals and to their perceptions of progress plays a significant role in shaping their pathways to settlement. In addition, a lack of recognition of pre-immigration credentials may increase immigrants’ dissatisfaction with lower level jobs and affect their sense of belonging. Of course, this is somewhat speculative and needs confirmation through further research.