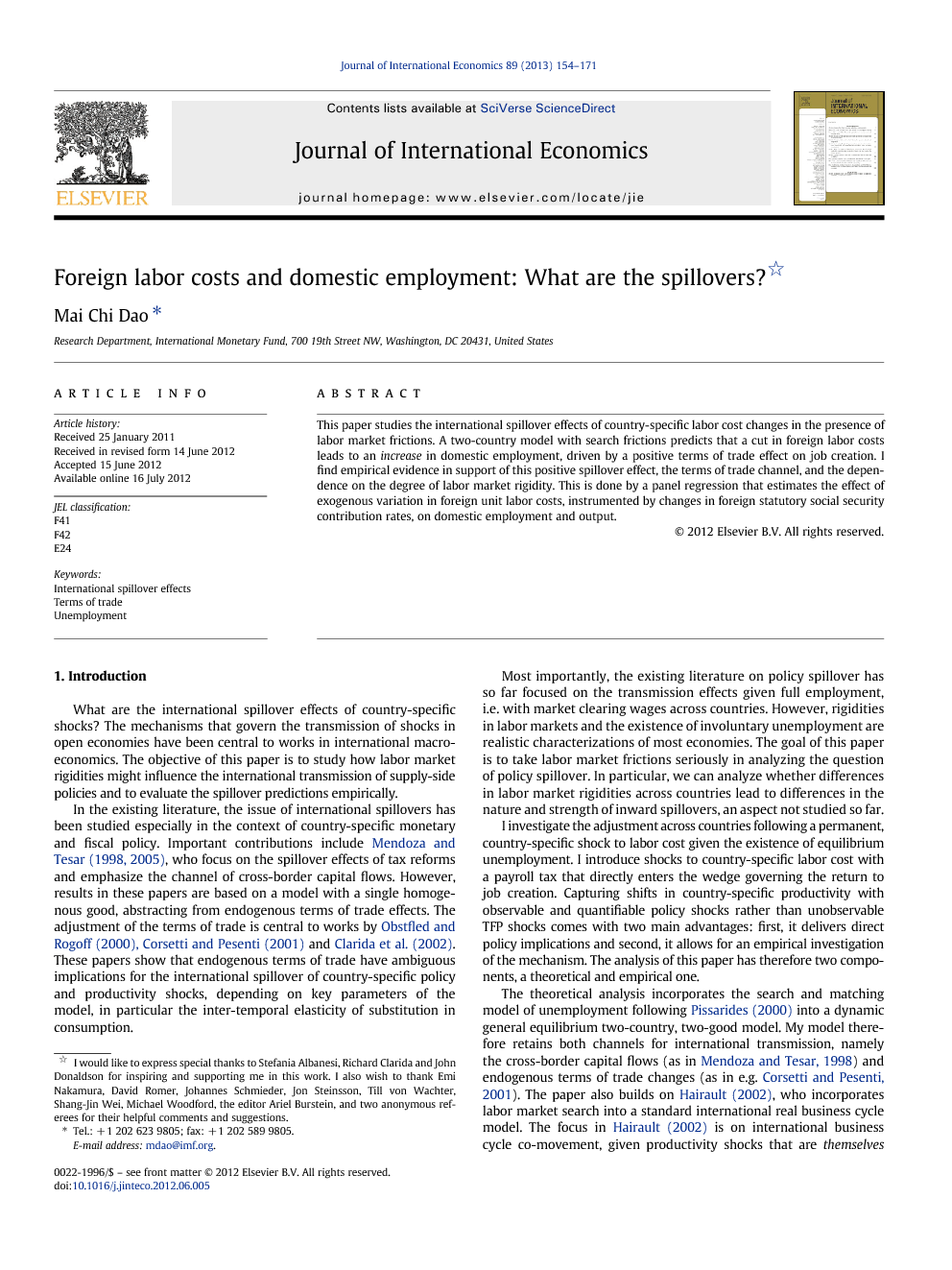 This paper studies the international spillover effects of country-specific labor cost changes in the presence of labor market frictions. A two-country model with search frictions predicts that a cut in foreign labor costs leads to an increase in domestic employment, driven by a positive terms of trade effect on job creation. I find empirical evidence in support of this positive spillover effect, the terms of trade channel, and the dependence on the degree of labor market rigidity. This is done by a panel regression that estimates the effect of exogenous variation in foreign unit labor costs, instrumented by changes in foreign statutory social security contribution rates, on domestic employment and output.

What are the international spillover effects of country-specific shocks? The mechanisms that govern the transmission of shocks in open economies have been central to works in international macroeconomics. The objective of this paper is to study how labor market rigidities might influence the international transmission of supply-side policies and to evaluate the spillover predictions empirically. In the existing literature, the issue of international spillovers has been studied especially in the context of country-specific monetary and fiscal policy. Important contributions include Mendoza and Tesar, 1998 and Mendoza and Tesar, 2005, who focus on the spillover effects of tax reforms and emphasize the channel of cross-border capital flows. However, results in these papers are based on a model with a single homogenous good, abstracting from endogenous terms of trade effects. The adjustment of the terms of trade is central to works by Obstfled and Rogoff, 2000 and Corsetti and Pesenti, 2001 and Clarida et al. (2002). These papers show that endogenous terms of trade have ambiguous implications for the international spillover of country-specific policy and productivity shocks, depending on key parameters of the model, in particular the inter-temporal elasticity of substitution in consumption. Most importantly, the existing literature on policy spillover has so far focused on the transmission effects given full employment, i.e. with market clearing wages across countries. However, rigidities in labor markets and the existence of involuntary unemployment are realistic characterizations of most economies. The goal of this paper is to take labor market frictions seriously in analyzing the question of policy spillover. In particular, we can analyze whether differences in labor market rigidities across countries lead to differences in the nature and strength of inward spillovers, an aspect not studied so far. I investigate the adjustment across countries following a permanent, country-specific shock to labor cost given the existence of equilibrium unemployment. I introduce shocks to country-specific labor cost with a payroll tax that directly enters the wedge governing the return to job creation. Capturing shifts in country-specific productivity with observable and quantifiable policy shocks rather than unobservable TFP shocks comes with two main advantages: first, it delivers direct policy implications and second, it allows for an empirical investigation of the mechanism. The analysis of this paper has therefore two components, a theoretical and empirical one. The theoretical analysis incorporates the search and matching model of unemployment following Pissarides (2000) into a dynamic general equilibrium two-country, two-good model. My model therefore retains both channels for international transmission, namely the cross-border capital flows (as in Mendoza and Tesar, 1998) and endogenous terms of trade changes (as in e.g. Corsetti and Pesenti, 2001). The paper also builds on Hairault (2002), who incorporates labor market search into a standard international real business cycle model. The focus in Hairault (2002) is on international business cycle co-movement, given productivity shocks that are themselves correlated across countries. The focus of my analysis is instead on a country-specific (i.e. internationally uncorrelated) policy shock and to study in particular how the labor markets across countries adjust to this. This exercise gives a sharper implication for the spillover mechanism since it is not confounded by the correlation of underlying shocks and is more conducive to empirical tests. The model predicts that following a payroll tax cut in country 1, employment in both country 1 and country 2 increases. The mechanism works as follows. The tax cut in country 1 triggers a positive supply effect in country 1. This improves the terms of trade for country 2, which in turn, increases the return to a job match in country 2. In equilibrium, wages in country 2 also increase due to the rent-sharing mechanism of wage bargaining. However, common surplus maximization ensures that higher wages do not offset the increased return to hiring. Consequently, a positive supply shock in country 1 always entails a positive spillover effect on employment in country 2. Helpman and Itskhoki (2010) also analyze the impact of lowering domestic labor market frictions on the trading partner, but use a static Melitz-type trade model with search frictions in two sectors, endogenous firm entry and varying trade impediments. While the terms of trade channel is also present in their model, the main spillover mechanism relies on workers' inter-sectoral reallocation and firms' entry decision following a change inrelative prices. Nevertheless, lower labor cost in the domestic economy also leads to lower unemployment in the foreign economy in their model, although the implication for welfare is more differentiated. The main contribution of my paper is empirical. Since the key result of the model is the positive spillover effect on employment across countries, it is natural to investigate whether this prediction is in fact consistent with data. There are inherent difficulties in identifying exogenous shifts in tax policies. Most studies, e.g. Blanchard and Perotti (2002), essentially rely on a cyclical adjustment of government spending and tax revenues using long run elasticities of these fiscal components with respect to output fluctuations. This paper uses another approach to identify country-specific tax variation. Instead of relying on measures of effective aggregate tax rates or cyclically adjusted tax revenues, I use a statutory tax rate that enters directly the firm's labor cost, namely the statutory rate of employer social security contribution. To evaluate the main implication of the model, I use a panel of 17 OECD countries from 1981 to 2006 to estimate the impact of exogenous variation of foreign unit labor costs on domestic output and employment. I instrument exogenous variations in the foreign unit labor costs with statutory social security contribution rates of trading partner countries. Consistent with the prediction of the model, lower foreign labor costs lead to improved terms of trade and an increase in the domestic employment rate. Furthermore, in line with the model prediction, countries with higher average unemployment rates experience stronger positive spillovers, implying that labor market rigidity indeed plays an important role for cross-country spillovers. The paper is organized as follows. Section 2 describes the model, Section 3 discusses the simulation results for the spillover analysis and some sensitivity checks. Section 4 presents the empirical analysis and Section 5 concludes.

Models in the open-economy literature that are used to analyze international spillover effects of policy shocks rarely account explicitly for the role of labor market rigidities. The goal of this paper was to explore whether differences in labor market rigidities across countries, e.g. due to different institutions or structural mismatches, can lead to differences in the spillover effect a country might experience. When there is unemployment resulting from search and matching frictions in the labor markets, the prediction for the spillover effect on employment is unambiguous. An expansion of the supply of foreign goods increases domestic terms of trade, which in turn improve the rents to a domestic job match, so that employment in the domestic country increases. The degree of the labor market rigidity, in turn, matters for the magnitude of the spillover effect on employment: more rigidity, i.e. higher unemployment in the domestic labor market lowers the workers' bargaining power. Under this condition, a given terms of trade improvement leads to a smaller wage increase and larger employment spillover. The predictions for the spillover effect on employment and output are tested empirically using a panel of OECD countries from 1981 to 2006. I find that an exogenous decrease in the foreign unit labor costs in manufacturing leads to a statistically significant positive spillover effect on domestic employment, while the effect on output is much less pronounced. This is consistent with the predictions of the model. Furthermore, higher long-term average unemployment is associated with a stronger inward spillover, implying that countries with large labor market frictions and high unemployment are most likely to gain in terms of jobs and employment spillover from a trading partner's supply-side reform. The results also lead to the conclusion that Walrasian models with full employment are at best not helpful in understanding the spillover, because frictions do not exist and hence have no role to play for the transmission mechanism, and at worst misleading as they, under common calibration, imply qualitatively different spillover effects than those found in the data. The results of this paper shed light on various policy discussions in the international context. For example, the issue of international policy transmission has been long debated in the European Union. Despite a high degree of harmonization of policies in goods and financial markets, labor market policies are still decided mainly at the national level. Some countries have advocated for more labor market liberalization in concerted action at the European level.23 This paper's results provide a theoretical and empirical justification for this argument. Another related question is whether increased trade with developing countries where labor costs are low will lead to higher unemployment in industrialized countries due to loss of competitiveness. Results in this paper suggest that with equilibrium unemployment, the improved terms of trade could actually increase domestic job creation. There are several avenues for future research. In terms of the theoretical analysis, questions such as spillover effects of capital or consumption taxes, or monetary and fiscal policy can also be studied in this framework. Another interesting question for a stochastic version of the model is what role the labor market plays in determining the impact of foreign countries' monetary and fiscal rules on domestic macroeconomic volatility. Empirically, further insights into the channels of international policy transmission at the micro level could be obtained using industry or firm-level data.