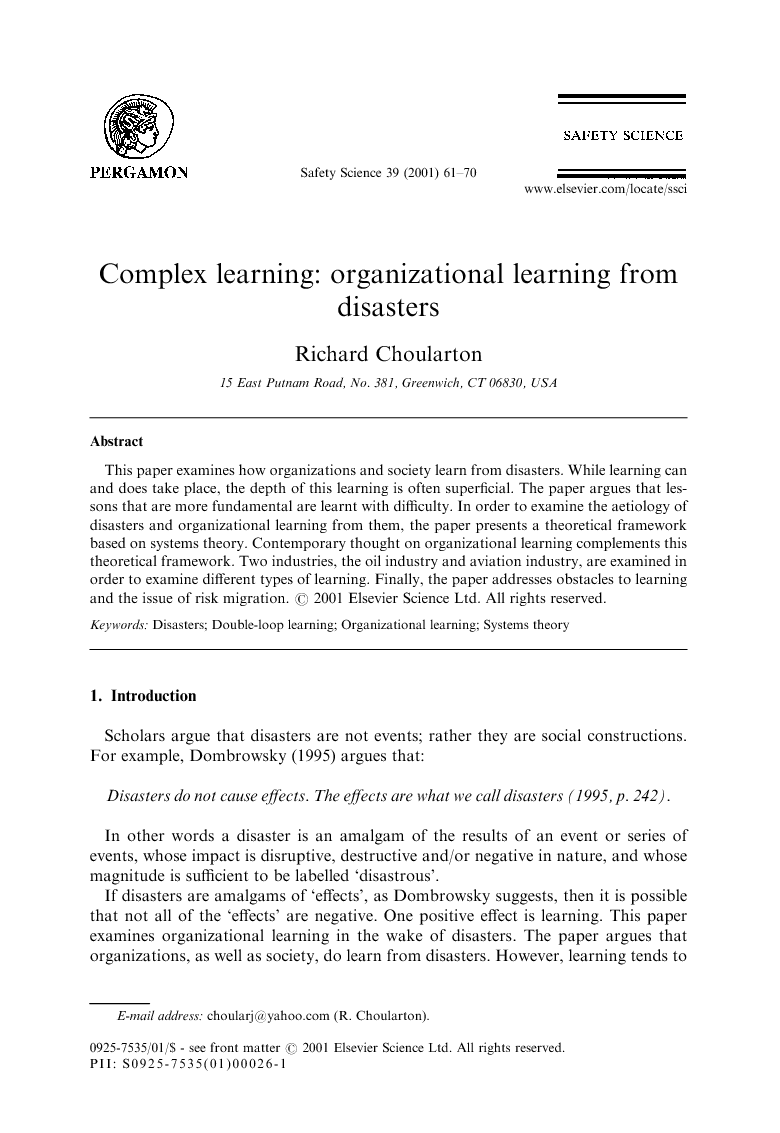 This paper examines how organizations and society learn from disasters. While learning can and does take place, the depth of this learning is often superficial. The paper argues that lessons that are more fundamental are learnt with difficulty. In order to examine the aetiology of disasters and organizational learning from them, the paper presents a theoretical framework based on systems theory. Contemporary thought on organizational learning complements this theoretical framework. Two industries, the oil industry and aviation industry, are examined in order to examine different types of learning. Finally, the paper addresses obstacles to learning and the issue of risk migration.

Scholars argue that disasters are not events; rather they are social constructions. For example, Dombrowsky (1995) argues that: Disasters do not cause effects. The effects are what we call disasters (1995, p. 242). In other words a disaster is an amalgam of the results of an event or series of events, whose impact is disruptive, destructive and/or negative in nature, and whose magnitude is sufficient to be labelled ‘disastrous’. If disasters are amalgams of ‘effects’, as Dombrowsky suggests, then it is possible that not all of the ‘effects’ are negative. One positive effect is learning. This paper examines organizational learning in the wake of disasters. The paper argues that organizations, as well as society, do learn from disasters. However, learning tends to occur at different levels. While superficial learning is common, more fundamental lessons are harder to learn. The paper will begin by developing an outline of a theoretical framework for examining and analyzing organizational learning in the wake of disasters. A general sociological disaster theory outlined by Mayntz (1997) is used to put disasters in a broad societal context. Social theory on the aetiology of disasters, or the disaster cycle, complements this broad societal framework. This section is important because it provides a framework, which allows disasters to be analyzed in a systematic manner. In the context of this framework, different types of learning will then be discussed. This theoretical framework will be applied to two case studies, examining aviation safety and oil spills. The case studies pay special attention to learning processes. Examples of how difficult it is to learn fundamental lessons will highlight the challenges that organizations face in ensuring the future mitigation of analogous disasters. Finally, conclusions will be presented discussing obstacles to learning from disasters. These obstacles include organizational issues, such as poor safety cultures, and societal issues such as risk migration

Both Birkland and Perrow present special circumstances, which have lead to the incorporation of lessons learnt. Both have also shown that achieving double-loop learning is problematic and does not occur easily, due to many obstacles. Sagan (1993) presents four constraints on organizational learning. First, feedback from the real world is often ambiguous. This allows pre-conceived and convenient positions to be supported through different interpretations of the available information. Second, post-event adjustment often takes place in a highly charged or political environment in which blame is sought. This is a characteristic of the recovery stage of the disaster cycle identified by Smith (1990), which prevents open and objective learning from taking place. Third, faulty reporting from those individuals with vested interests in obscuring the truth prevent objective analysis of the situation. Finally, secrecy, or the failure of internal organizational communication due to restrictions on information flow, prevents learning from taking place. Within organizations these limitations can be linked with Argyris and Schon, 1974 and Argyris and Schon, 1978 concept of Model I behaviour, which is dominant in government, industry and elsewhere in society. Model I behaviour is defensive in nature, results in inefficiency and averts double-loop learning (Bain, 1999). Model I behaviour is governed by four values which include rationality, winning, achievement, and the suppression of negative feelings (Bain, 1999). These four factors in an organizational setting do not permit auto-critical analysis, either at the organizational level or more generally at the societal level. In systems dominated by Model I behaviour single-loop learning is the only form of learning likely to occur, since addressing the root causes of an event would focus on loss and not gain, and would dwell on the negative past which tends to be suppressed. Finally, it is possible that the achievement of double-loop learning makes the balance between the requirements of a system and the problem it faces unsustainable. For example, Browning and Shelter (1992) show how the Oil Pollution Act of 1990 led to increased costs for American oil companies. This led these and other companies to increase their international activities in countries with less rigid legal requirements — countries where the lessons of Exxon Valdez had not been learnt. This shift in oil company operations to ‘less expensive’ countries is a form of risk migration, a concept introduced by Adams (1995). Adams argues that a balance between perceived dangers and potential rewards governs risk decisions. In essence, if the rewards compensate the perceived danger, the risk will be taken. This is a similar concept to that of Mayntz's balance between the requirements and problems a system must deal with in defining the system's precautionary norms. Adams (1995) contends that when one risk is reduced, others appear in compensation. In a study of speeding motorists, Adams noticed that when a traffic light or stop sign appeared on a road where speeding was problematic, although there was a reduction in speeding on that road, speeding increased on other nearby roads. In other words, the risk migrated to the other roads. In the case of the Exxon Valdez, lessons were learnt in the context of American society. However, the risk migrated to other countries where the perceived dangers, in fines or loss of revenue for the oil companies, were less. In this paper it has been shown that learning can take place from disasters. However, achieving a level of learning which addresses the root causes of disasters, is difficult. Model I behaviour, prevalent in society, is not conducive to a productive didactic process. Moreover, when learning does take place, a process of risk migration may offset any gain made through learning.