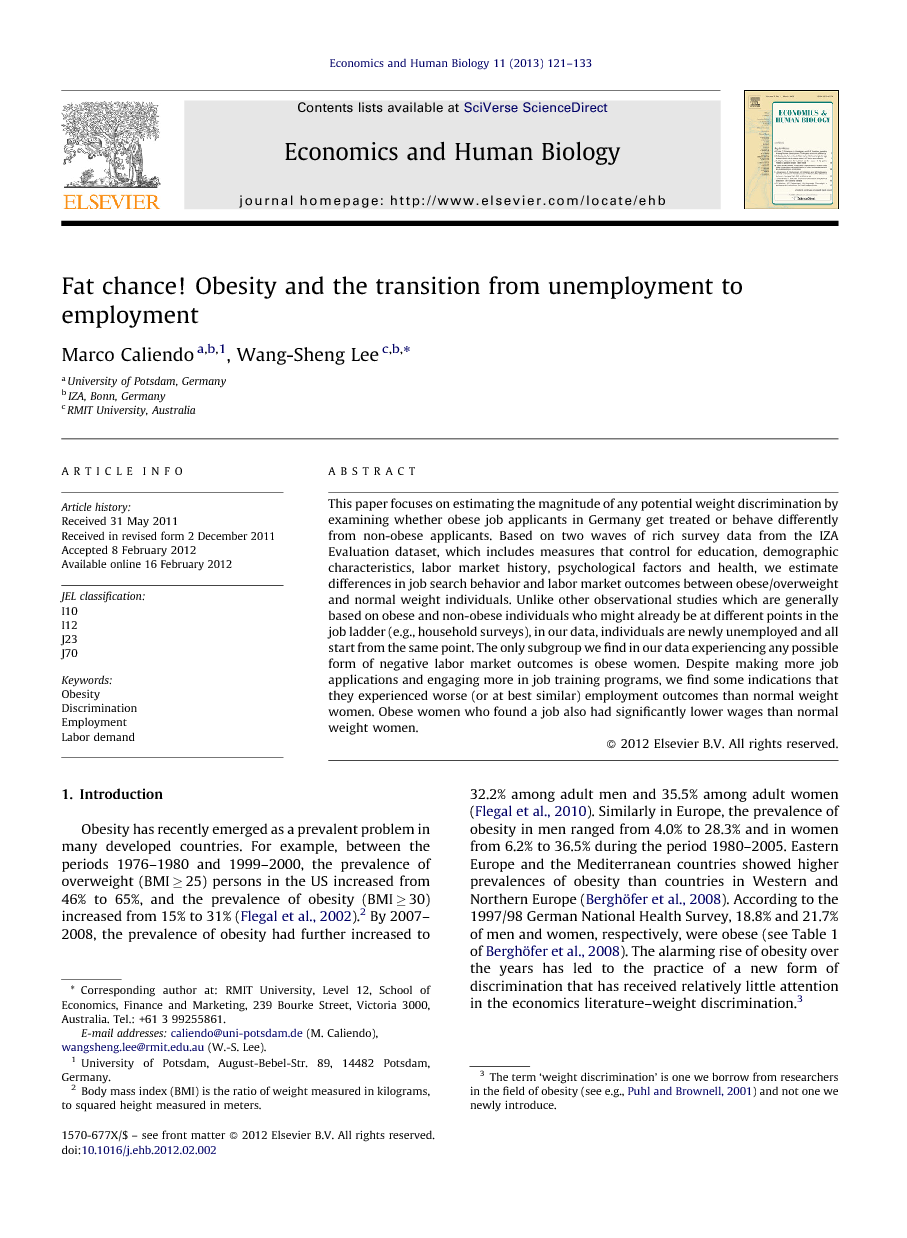 This paper focuses on estimating the magnitude of any potential weight discrimination by examining whether obese job applicants in Germany get treated or behave differently from non-obese applicants. Based on two waves of rich survey data from the IZA Evaluation dataset, which includes measures that control for education, demographic characteristics, labor market history, psychological factors and health, we estimate differences in job search behavior and labor market outcomes between obese/overweight and normal weight individuals. Unlike other observational studies which are generally based on obese and non-obese individuals who might already be at different points in the job ladder (e.g., household surveys), in our data, individuals are newly unemployed and all start from the same point. The only subgroup we find in our data experiencing any possible form of negative labor market outcomes is obese women. Despite making more job applications and engaging more in job training programs, we find some indications that they experienced worse (or at best similar) employment outcomes than normal weight women. Obese women who found a job also had significantly lower wages than normal weight women.

Obesity has recently emerged as a prevalent problem in many developed countries. For example, between the periods 1976–1980 and 1999–2000, the prevalence of overweight (BMI ≥ 25) persons in the US increased from 46% to 65%, and the prevalence of obesity (BMI ≥ 30) increased from 15% to 31% (Flegal et al., 2002).2 By 2007–2008, the prevalence of obesity had further increased to 32.2% among adult men and 35.5% among adult women (Flegal et al., 2010). Similarly in Europe, the prevalence of obesity in men ranged from 4.0% to 28.3% and in women from 6.2% to 36.5% during the period 1980–2005. Eastern Europe and the Mediterranean countries showed higher prevalences of obesity than countries in Western and Northern Europe (Berghöfer et al., 2008). According to the 1997/98 German National Health Survey, 18.8% and 21.7% of men and women, respectively, were obese (see Table 1 of Berghöfer et al., 2008). The alarming rise of obesity over the years has led to the practice of a new form of discrimination that has received relatively little attention in the economics literature–weight discrimination.3 Researchers estimate that at present, weight discrimination is comparable to rates of race and age discrimination, especially among women. In 1995–1996, weight discrimination was reported by 7% of US adults. In 2004–2006, that percentage rose to 12% of adults (Andreyeva et al., 2008). Puhl and Brownell (2001) published the first comprehensive review of several decades of research documenting bias and stigma toward overweight and obese persons. Their review summarized weight stigma in domains of employment, health care, and education, demonstrating the vulnerability of obese persons to many forms of unfair treatment. It highlighted that weight discrimination is rampant in the workplace, health care and education arenas. Based on data from the National Survey of Midlife Development in the US, a nationally representative sample of adults aged 25–74 years, Roehling et al. (2007) found that overweight respondents were 12 times more likely, obese respondents were 37 times more likely, and severely obese respondents were 100 times more likely than normal weight respondents to report employment discrimination. In addition, women were 16 times more likely to report weight-related employment discrimination than men. A meta-analysis of 32 experimental studies which investigated weight discrimination in employment settings was recently conducted by Roehling et al. (2008). Typically, such experimental studies ask participants to evaluate a fictional applicant's qualifications for a job, where his or her weight has been manipulated (through written vignettes, videos, photographs or computer morphing). Outcome variables examined in these studies included hiring recommendations, qualification/suitability ratings, disciplinary decisions, salary assignments, placement decisions, and co-worker ratings. Across studies, it was demonstrated that overweight job applicants and employees were evaluated more negatively and had more negative employment outcomes compared to non-overweight applicants and employees. This paper focuses on examining whether newly unemployed and obese job applicants in Germany get treated or behave differently from non-obese applicants. Despite evidence that obese people experience discrimination, to date, with the exception of the state of Michigan in the US, which enacted a law in 1977 prohibiting discrimination against overweight people, there are no laws protecting overweight people from discrimination in employment, education, and health care. In Germany, the 2006 General Equal Treatment Act (Allgemeines Gleichbehandlungsgesetz) was introduced only after a long and controversial legislative procedure. This was intended to be a combination of four EU Equality Directives (2000/43, 2000/78, 2002/73 and 2004/113) and prohibits discrimination based on race or ethnical origin, religion or belief, sex, disability, age or sexual orientation. Discrimination against the obese is not explicitly mentioned in the 2006 Act but the new anti-discrimination culture in Germany could plausibly have indirect effects on them. In addition to observing the employment outcomes of job applicants, a novel feature of our data set is that we also have information on the search behavior of job applicants. We therefore will be given insights as to whether any observed differences in labor market outcomes have arisen because one group simply was less motivated or tried less hard to look for a job, or possibly because they had different access to labor market training programs. To preview our findings, we find that overweight men, obese men and overweight women experience no discrimination in terms of access to programs that are part of active labor market policies (ALMP) or in their employment and wage outcomes. The only group we find in our data experiencing any possible form of negative labor market outcomes is obese women. Despite making more job applications and engaging more in job training programs, we find some indications that they experienced worse (or at best similar) employment outcomes than normal weight women. Obese women who found a job also had significantly lower wages than normal weight women. The rest of this paper is organized as follows. Section 2 describes the data in more detail. Section 3 provides more background and discusses some theoretical motivations, whereas Section 4 presents the methods used. The empirical results are provided in Section 5. Finally, Section 6 concludes.

The economics literature has focused on estimating the effects of many different forms of discrimination. Like other forms of discrimination, weight discrimination is highly dependent on public perception. It is therefore a useful exercise to carry out empirical studies on many different subgroups of the population to measure the full extent of any discrimination that might exist in society. In this paper, we examined the issue of whether obese job applicants that newly enter unemployment in Germany have different job search behaviors from non-obese applicants, whether they participate at the same rate in ALMP programs and whether they are regarded differently by employers. The thought experiment was to hold a ‘beauty contest’ where employers choose whom to hire first from a line up of unemployed persons. Unlike other observational studies which are generally based on obese and non-obese individuals who might already be at different points in the job ladder (e.g., household surveys), in this case, individuals all start from the same point—they are newly unemployed. In the sense that we are trying to create a hypothetical experiment whereby individuals newly entering unemployment are assigned to different weight groups, our study design might be viewed as being somewhere in-between an experimental study and a standard observational study. Our results suggest that no discrimination occurs for overweight males and females. Obese men also do not appear to suffer any forms of discrimination. The only group we find in our data experiencing any possible form of negative labor market outcomes is obese women. Compared to normal weight women, obese women made more job applications and engaged more in job training programs. At the same time we find some indications that they experienced worse (or at best similar) employment outcomes than normal weight women. One possible interpretation of these results is that obese women need to search harder in order to achieve similar employment outcomes as normal weight women. Obese women who found a job also had significantly lower wages than normal weight women even after controlling for an extensive set of personal characteristics. Although this might partly be an empirical realization of the fact that obese women were willing to accept lower wages to begin with, it could also reflect discrimination on the part of employers. Our data do not allow us to disentangle whether health problems among the obese might be the result of past discrimination, or whether obesity causes health problems. Further research on understanding the interaction between obesity, health and labor market outcomes will be useful.