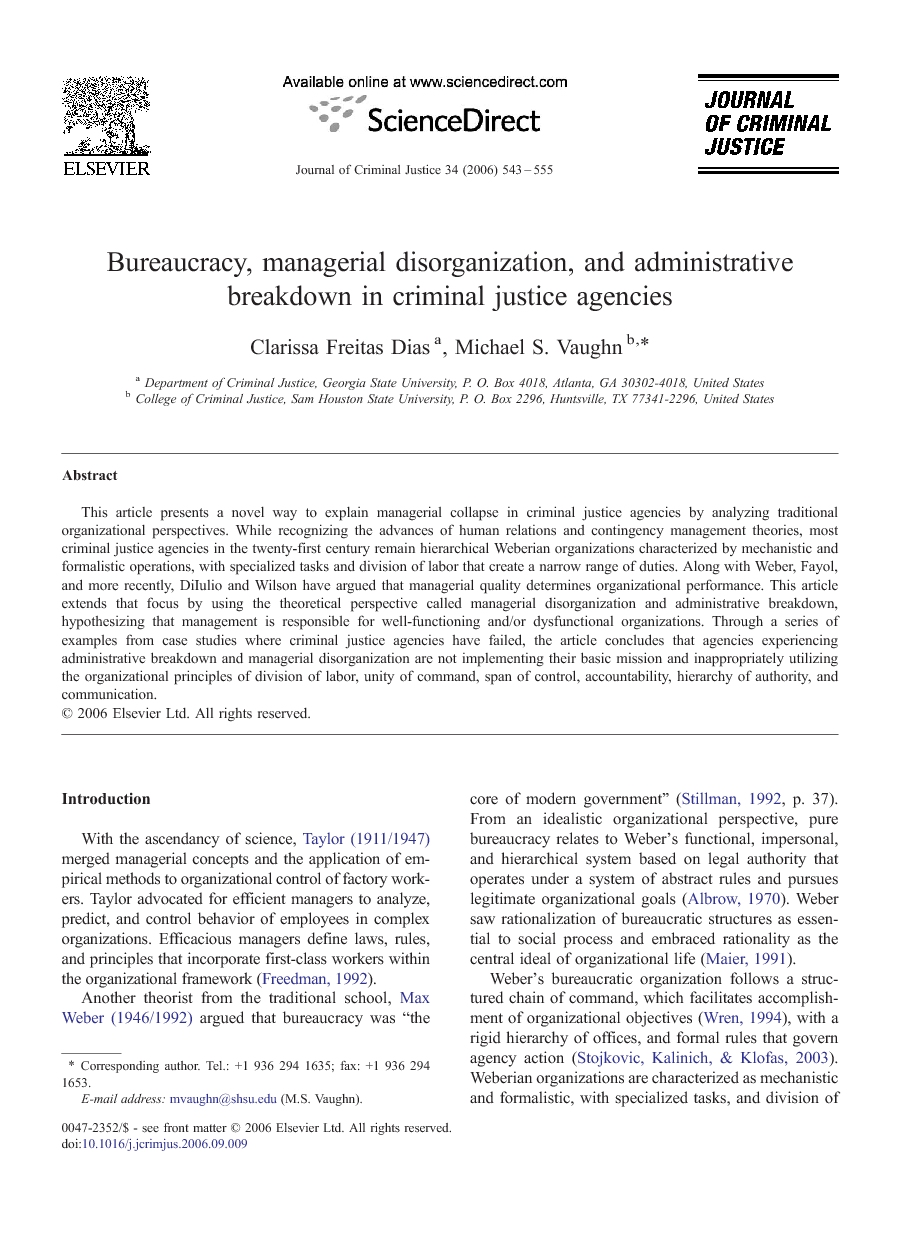 This article presents a novel way to explain managerial collapse in criminal justice agencies by analyzing traditional organizational perspectives. While recognizing the advances of human relations and contingency management theories, most criminal justice agencies in the twenty-first century remain hierarchical Weberian organizations characterized by mechanistic and formalistic operations, with specialized tasks and division of labor that create a narrow range of duties. Along with Weber, Fayol, and more recently, DiIulio and Wilson have argued that managerial quality determines organizational performance. This article extends that focus by using the theoretical perspective called managerial disorganization and administrative breakdown, hypothesizing that management is responsible for well-functioning and/or dysfunctional organizations. Through a series of examples from case studies where criminal justice agencies have failed, the article concludes that agencies experiencing administrative breakdown and managerial disorganization are not implementing their basic mission and inappropriately utilizing the organizational principles of division of labor, unity of command, span of control, accountability, hierarchy of authority, and communication.

This article offers a novel theoretical approach to explain managerial disorganization and administrative breakdown in criminal justice agencies. Explaining organizational failure through breakdown and disorganization theory, which assesses agency success on criminal justice managers, this article joins the call for a return to the study of management as a key variable in criminal justice scholarship (DiIulio, 1990a, DiIulio, 1990b, DiIulio, 1991, DiIulio, 1994a, DiIulio, 1994b and Wilson, 1989). Successful bureaucratic agencies are exemplified by managers with effective communication skills who implement a functional span of control within the hierarchy of authority, practice strict accountability, rely on a mix of formal written and informal verbal communication, operate with clear goals and objectives, and delegate appropriate tasks to subordinates. While outside the scope of this current article, successful criminal justice agencies may also use elements of Elton Mayo's human relations theory and the contextual approaches of situational and contingency management (for a detailed discussion, see Houston, 1995). Poor management results in breakdown and disorganization within criminal justice agencies. Managers who ignore warning signs (Boin & Van Duin, 1995)–lack of task specialization and divisionalization, unclear goals, inappropriate delegation of authority that shifts accountability (O'Loughlin, 1990), distorted lines of communication (Garret, 2001), and a malfunctioning unity of command–fail to anticipate risk and demonstrate inability to recover quickly in response to threat (Comfort et al., 2001). Managers fail organizationally when they mismanage Fayol and Weber's elements of the organization, which can lead to breakdown and disorganization of the entire system. Agencies experiencing managerial breakdown and administrative disorganization are frequently plagued with systemic patterns of normalized deviance (Weick, 1993). Structural dysfunction fosters subordinates' isolation from legitimate authority. Managers construe an environment that can lead subordinates to ignore organizational goals and objectives. Operational dysfunction is the result or absence of supervisors, consequently no one to report to, undefined chain of command, and ambiguous unity of command, which results in no one from which to receive orders (Weick, 1993). Organizations are dysfunctional because managers are not accountable. Dysfunctional agencies lack the structure or operational capacity to deal with problem behavior or organizational collapse, so there is no bureaucratic management structure in place to respond appropriately to a problem (Weick, 1976). During crisis situations, organizations experiencing breakdown and disorganization are incapable of being managed effectively. Dysfunctional agencies have no unity of command, little hierarchy of authority, a great deal of employee autonomy, enhanced individual employee discretion, little supervision and accountability, planned unresponsiveness to society problems, and operate with a wide span of control. Dysfunctional agencies do not focus on data driven activities; subordinates within dysfunctional agencies do not operate with unity of direction or a set of coherent agency goals (Maguire & Katz, 2002). The way public organizations are managed has a significant bearing on the quality of system performance (DiIulio, 1989). DiIulio (1987) posits that the quality of prison life depends mainly on the quality of management. He asserts that prisons managed by a strong and stable team of like-minded executives, structured in a paramilitary, security-driven, bureaucratic fashion, and coordinated proactively in conjunction with the demands of relevant outside actors including legislators, judges, and community leaders had higher levels of order, safety, security, and service than prisons managed in the absence of performance indicators. Similarly, Useem and Kimball's (1989) analysis of prison riots found that breakdown in security procedures contributed to riots, including the absence of routine counting and frisking of inmates, the lack of a system to control contraband, and the failure of guards to routinely search prisoners' cells. Useem and Kimball (1989) concluded that conditions of confinement may lead to prison riots, but administrative breakdown and disorganization makes their frequency and intensity more severe. Well-functioning organizations exist within bureaucratic structures as long as managers effectively implement Weber and Fayol's organizational principles. Managers of bureaucratic agencies are successful as long as they create specifically defined meaningful work opportunities for their employees, train their subordinates in detail, and establish goals and objectives to clarify the unity of direction. Successful bureaucracies create a well-defined hierarchy of authority, operate a well-functioned unity of command, and appropriately delegate tasks so as to maintain accountability for actions taken. Future research should focus on the extent to which bureaucratic criminal justice organizations operate within a human relations framework (Miller & Braswell, 1997). Researchers should explore the degree to which an organizations' bureaucratic structure fosters change or serves to be an impediment to change. Conventional wisdom has decried bureaucratic agencies as relics of the past, completely inefficient and useless in today's modern world. Even so, bureaucratic management systems are the norm, not the exception, in criminal justice agencies in the twenty-first century. Given the paramilitaristic nature of most criminal justice agencies, more criminal justice research needs to focus on management as an explanation for organizational failure and dysfunction. This perspective needs to be applied to a variety of criminal justice agencies, including law enforcement, community and institutional corrections, juvenile justice, as well as the criminal and civil courts.