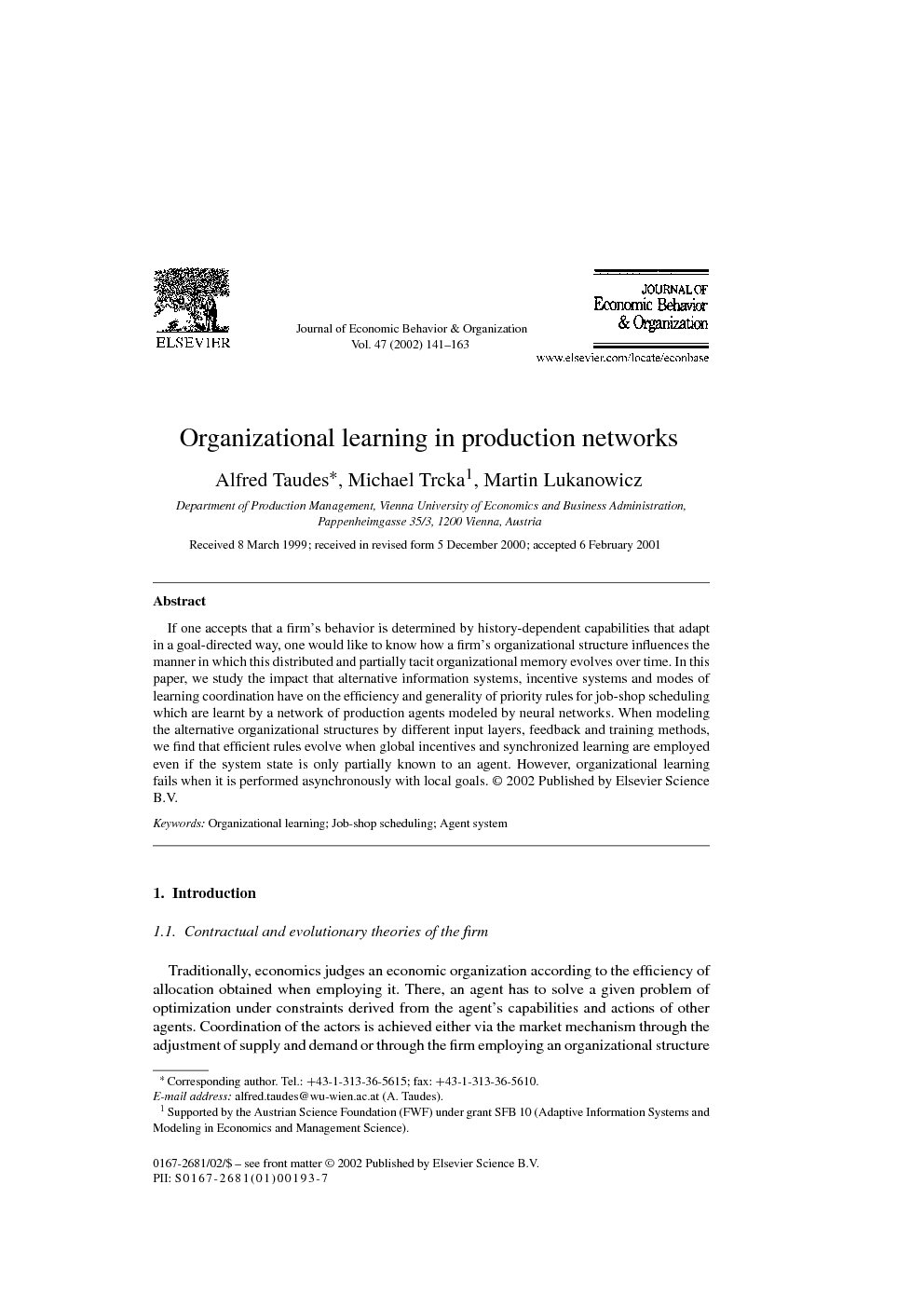 If one accepts that a firm’s behavior is determined by history-dependent capabilities that adapt in a goal-directed way, one would like to know how a firm’s organizational structure influences the manner in which this distributed and partially tacit organizational memory evolves over time. In this paper, we study the impact that alternative information systems, incentive systems and modes of learning coordination have on the efficiency and generality of priority rules for job-shop scheduling which are learnt by a network of production agents modeled by neural networks. When modeling the alternative organizational structures by different input layers, feedback and training methods, we find that efficient rules evolve when global incentives and synchronized learning are employed even if the system state is only partially known to an agent. However, organizational learning fails when it is performed asynchronously with local goals.

We investigated various aspects of a hypertext organization for job-shop scheduling in a production network in the sense that scheduling routines evolve under coordinated learning in an exploration phase and are then routinely applied in an exploitation phase. The main findings of our inquiry into this organizational learning problem can be summarized as follows. • Uncoordinated learning with local goals is inferior as, under this setting, it is hard to find proper cause–effect relations. It seems appropriate only for obtaining a fast initial improvement. If this organizational structure is chosen, one should find a learning rate that is a good compromise between ambiguous learning and learning too slowly. In general, a lower learning rate is advantageous. In this respect, our findings coincide with those by Lounamaa and March (1987). • Coordinated learning has its price in the form of a higher coordination effort. For the problems studied in this paper, it turned out that the strongest coordination—namely the learning of one commonly applied rule based on synchronized experimentation and global feedback—yielded the best results. Improving this setting locally did not improve the results. Thus, in this case the diversity in the distributed organizational memory was not advantageous. This finding can be one reason for the recently emerged interest in supply chain management which stresses the need to centralize the planning and control of production and logistics for firms operating in a network of supply relations (see, e.g. Poirier, 1999). • In most cases, it was found that a strategy with foresight was beneficial. Taking into account also the previous results, we suggest that incentives based on local machine utilization are not good for organizational learning. Altogether, the results obtained strongly support the notion that a process-oriented organization coupled with teams that coordinate and evaluate continuous improvement as described, e.g. in Monden (1995) or Lillrath and Kano (1989) is the best way of organizing organizational learning. • On the other hand, the information system used can be quite parsimonious. In general, good results are obtained by a global static information system where the information about the operations is generated when the load is passed on to the production network. Furthermore, the information can be moved together with the parts to be produced via the operations to be scheduled, and on this basis, the decisions in the exploitation phase can be made autonomously. Also, the additional effort expended on the communication needed by a strategy with foresight only requires the local exchange of data between two agents. • The results obtained contradict the analytical separation between production and governance structure made in transaction cost economics. In our case, production costs are a function of the quality of the scheduling rules learnt which depends on the mode of governance used (see Hodgson, 1998 for a similar line of reasoning). Clearly, while having empirical support and correlating to other similar works, the results described above only hold for the problem studied in this paper. Thus, the development of analytical models of organizational learning would be a fruitful field of further research. Other areas of interest could be the explicit modeling of the coordination needed for integrating the distributed organizational memory into a common one when a single rule shall be evolved as well as the study of combined autonomous-coordinated learning schemes.