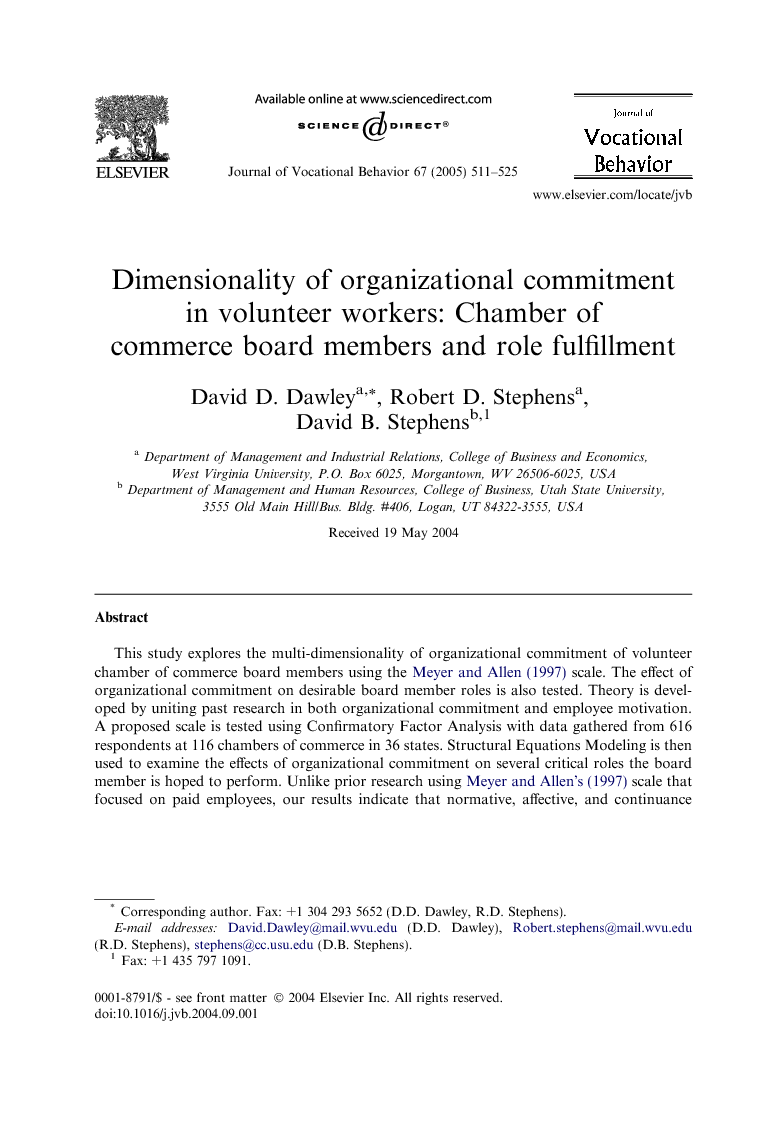 Organizational commitment is a multi-dimensional construct that has been shown to influence several positive job outcomes including reduced absenteeism and turnover (Riketta, 2002), self-reported citizenship (Meyer, Allen, & Smith, 1993), work effort (Bycio, Hackett, & Allen, 1995), and job performance (Meyer, Stanley, Herscovitch, & Topolnytsky, 2002). The vast majority of studies in this area have looked at the commitment of paid employees (Allen and Meyer, 1990, Mathieu and Zajac, 1990, Meyer and Allen, 1997 and Meyer et al., 2002). A few studies, however, have examined organizational commitment of volunteers rather than employees (Dailey, 1986 and Pearce, 1993). These volunteer studies used the former Porter, Steers, Mowday, and Boulian (1974) OC instrument, and volunteer workers have yet to be studied using any variation of Meyer and Allen’s (1984) multi-dimensional scale. In the last 20 years, the preponderance of published OC studies have used refinements of Meyer and Allen, 1984, Meyer and Allen, 1991 and Meyer and Allen, 1997 23-item instrument. Volunteers are fundamentally different from paid employees in that the behavior of volunteers is less likely to be subject to “coercive” power than is the behavior of paid employees. This is due to the fact that volunteers are less likely to be dependent on organizational rewards than are employees who depend on the income from their employer for their livelihood (Pearce, 1993). Volunteers are also more likely to be part-time rather than full-time organizational participants and may have additional roles at other organizations. One group of organizational actors for whom the concept of commitment has been ignored by researchers is volunteer board of directors. Directors potentially play a central part in the realization of organizational outcomes. Like other volunteers, they are usually part-time rather than full-time organizational participants and are likely to have additional professional responsibilities at other organizations, either as board members, business owners, employees, or a combination of these positions. In the case of not-for-profit organizations, the directors are most likely volunteers in the sense of receiving no monetary compensation for their service on the board. The purpose of this paper is to unite recent research on organizational commitment and motivation to examine the applicability of Meyer and Allen’s (1997) scale to volunteer chamber of commerce board members, a group that has not been studied in this context before. The instrument is then tested empirically on a population of volunteer board members at non-profit chambers of commerce.

A commonly used statistical procedure to control for common method bias is the Harmon one-factor test (Podsakoff, MacKenzie, Lee, & Podsakoff, 2003). The underlying premise of this procedure is that if one general factor emerges through factor analysis, then a significant amount of method bias exists. We entered all 23 commitment items into a factor analysis. Results from the unrotated factor solution suggested the presence of six factors with eigenvalues greater than one, accounting for 60.2% of the total variance. This finding suggests that a significant amount of common method variance was not present. The mean scale scores for the three types of commitment assessed were remarkably similar and suggest that our volunteer chamber board members expressed relatively even amounts of commitment based on normative, affective, and continuance based on low alternatives. The item means and standard deviations within each scale are reported below. The normative scale had an item mean of 5.22, and a standard deviation of 1.59. The affective scale had an item mean of 5.24, and a standard deviation of 1.46. The low alternative scale had an item mean of 5.18, and a standard deviation of 1.41. The reliability estimates (Cronbach’s α) for the normative, affective, and low alternative scale were .75, .72, and .69, respectively. The reliabilities of the normative and affective scales were consistent with prior literature (Meyer et al., 2002), and the low alternative scale was consistent with that found by McGee and Ford (1987). The appropriate method for causal model testing using latent variables is the two-step procedure for testing structural equation models as suggested by Anderson and Gerbing (1988). The first step in this procedure uses Confirmatory Factor Analysis (CFA) to assess the fit of the commitment items to their respective scale. Input for CFA is the covariance matrix all scale items. Our data was nested in 116 organizations, thus raising a concern of non-independence bias. According to Hox (2002), calculation of the pooled within-groups (PWG) covariance matrix with df = N − G is necessary to use as LISREL input and corrects for bias due to intraclass correlation. We used the freeware program SPLIT2 (Hox, 2002), to compute the PWG covariance matrix. While the literature is divided over the use of a three- or four-factor model as discussed earlier, our first hypothesis is that volunteer data would follow a three-dimension factor structure—normative, affective, and continuance commitment based on low alternatives. To test Hypothesis 1 that this three-factor model would be a more appropriate lens for analyzing volunteer data, we performed four CFAs—one each for four different models as indicated in Table 2. Using LISREL 8.54 (Joreskog & Sorbom, 1999), the fit indices of each model were computed and are displayed in Table 1. In general, a root mean squared error of approximation (RMSEA) of less than .05, and normed (NFI), confirmed (CFI), and adjusted goodness of fit indices (AGFI) greater than 0.90, indicate a good fit of the data to the specified model (Bollen, 1989). The results offer support for Hypothesis 1 that the proposed three-factor model (normative, affective, and continuance commitment based on low alternatives) provides the best fit of the four models tested.Concurrent with the first step CFA outlined above, the two-step procedure uses CFA to assess the fit of the director role items to their respective scale. The director role CFA fit indices χ2 = 13.99 (9 df), RMSEA = .043, AGFI = .968, NFI = .990, and CFI = .994 indicate a good fit of the director role data to a one-factor model. We tested our fully specified model by using LISREL 8.54 (Joreskog & Sorbom, 1999). Input for LISREL 8.54 is the computed PWG computed covariance matrix based on the correlation matrix for the variables of interest. Means, standard deviations, and inter-item correlations are shown in Table 2.The fit indices for the fully hypothesized model were: χ2 = 466.96, df = 218, RMSEA = .042, NFI = .911, CFI = .938, and AGFI = .930. These fit indices indicated a good fit of the data to the hypothesized model. The full model with path coefficients and item loadings is shown in Fig. 1.