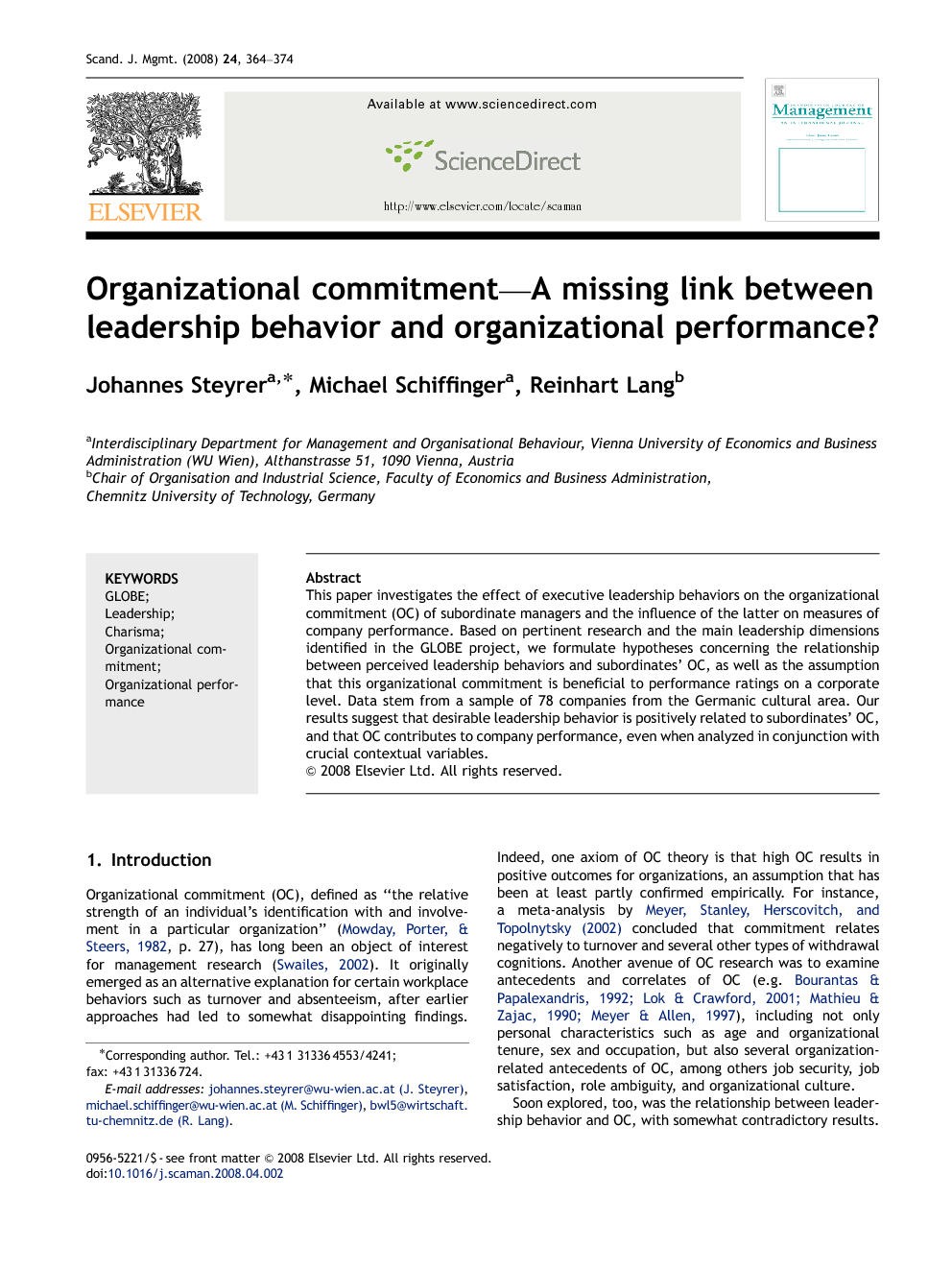 This paper investigates the effect of executive leadership behaviors on the organizational commitment (OC) of subordinate managers and the influence of the latter on measures of company performance. Based on pertinent research and the main leadership dimensions identified in the GLOBE project, we formulate hypotheses concerning the relationship between perceived leadership behaviors and subordinates’ OC, as well as the assumption that this organizational commitment is beneficial to performance ratings on a corporate level. Data stem from a sample of 78 companies from the Germanic cultural area. Our results suggest that desirable leadership behavior is positively related to subordinates’ OC, and that OC contributes to company performance, even when analyzed in conjunction with crucial contextual variables.

Organizational commitment (OC), defined as “the relative strength of an individual's identification with and involvement in a particular organization” (Mowday, Porter, & Steers, 1982, p. 27), has long been an object of interest for management research (Swailes, 2002). It originally emerged as an alternative explanation for certain workplace behaviors such as turnover and absenteeism, after earlier approaches had led to somewhat disappointing findings. Indeed, one axiom of OC theory is that high OC results in positive outcomes for organizations, an assumption that has been at least partly confirmed empirically. For instance, a meta-analysis by Meyer, Stanley, Herscovitch, and Topolnytsky (2002) concluded that commitment relates negatively to turnover and several other types of withdrawal cognitions. Another avenue of OC research was to examine antecedents and correlates of OC (e.g. Bourantas and Papalexandris, 1992, Lok and Crawford, 2001, Mathieu and Zajac, 1990 and Meyer and Allen, 1997), including not only personal characteristics such as age and organizational tenure, sex and occupation, but also several organization-related antecedents of OC, among others job security, job satisfaction, role ambiguity, and organizational culture. Soon explored, too, was the relationship between leadership behavior and OC, with somewhat contradictory results. Thus, some studies found OC to be influenced by participative decision-making and consideration (e.g. Glisson and Durick, 1988, Jermier and Berkes, 1979 and Savery, 1991), flexibility, emphasis on rules and regulations, hierarchy and role specialization (Zeffane, 1994), as well as by various aspects of organizational politics and leadership power (Wilson, 1995). On the other hand, O’Reilly and Roberts (1978), Hampton, Dubinsky, and Skinner (1986), Johnston, Parasuraman, Futrell, and Balck (1990) and Savery (1991) reported no linkage between OC and leadership behavior, while Hunt and Liebscher (1973) found a negative association between leaders’ production emphasis and some aspects of OC. By contrast, more recent studies investigating charismatic and transformational leadership have shown, with some consistency, a positive relationship with followers’ OC (Avolio et al., 2004, Barling et al., 1996, Bono and Judge, 2003, Dubinsky et al., 1995, Dumdum et al., 2002, Lowe et al., 1996, Walumbwa and Lawler, 2003 and Walumbwa et al., 2005). This posited link between leadership behavior and followers’ commitment raises the question of where commitment is focused. Employees are likely to be committed to multiple and different actors, goals and values. The relationships between the various foci of commitment have been illuminated by Becker and Billings (1993), who differentiated essentially between commitment to the immediate superior or work group (local commitment) and that to top management and the organization as a whole (global commitment). Empirical findings from Hunt and Morgan (1994) suggest that commitment to top management is the best predictor of overall OC. In their theoretical considerations, Meyer and Allen even go a step further: “It should be kept in mind, however, that when we as researchers measure commitment to the organization as a whole, we are probably measuring employees’ commitment to ‘top management’” (Meyer & Allen, 1997, p. 19). Our study therefore focuses on leaders at the senior executive level, on the assumption that these play a crucial role in shaping employees’ OC. While the connection between charismatic/transformational leadership and OC is fairly well established (DeGroot, Kiker, & Cross, 2000), the results relating to a possible link between OC and performance are more ambiguous and indicate only a weak relationship (Caruana et al., 1997, Keller, 1997 and Meyer et al., 2002). This is especially so when independent performance measures are employed instead of subjective self-rating (Dumdum et al., 2002 and Swailes, 2002). The preceding brief overview leads us to the two questions this study addresses: (1) How does senior leadership behavior influence followers’ OC? (2) What relationship, if any, exists between OC and measurements of corporate performance?

Hypotheses 1–5 posit a positive relationship between particular leadership dimensions and subordinates’ OC. Table 1 shows the bivariate correlations between all the leadership dimensions examined and OC. A comparison of means for the German versus the Austrian sample on the leadership dimensions and OC only showed one significant difference for autonomous leadership (not included in the hypotheses), where the Austrian sample had a higher average. The results presented refer to the data aggregated at company level. ICC and rwgrwg values do not point towards problems with data aggregation. The mean rwgrwg values for OC and the leadership scales range between 0.83 and 0.96 (±0.3±0.3 and 0.06), except for autonomous leadership (0.77, ±0.28±0.28), with few companies falling below the 0.7 threshold commonly accepted in the literature (James, Demaree, & Wolf, 1993). ICC values, too, were slightly above 0.7 for most dimensions, except for OC (0.68) and self-protective leadership (0.52), which is still acceptable (Klein et al., 2000). Autonomous leadership once again had the lowest value (0.36).