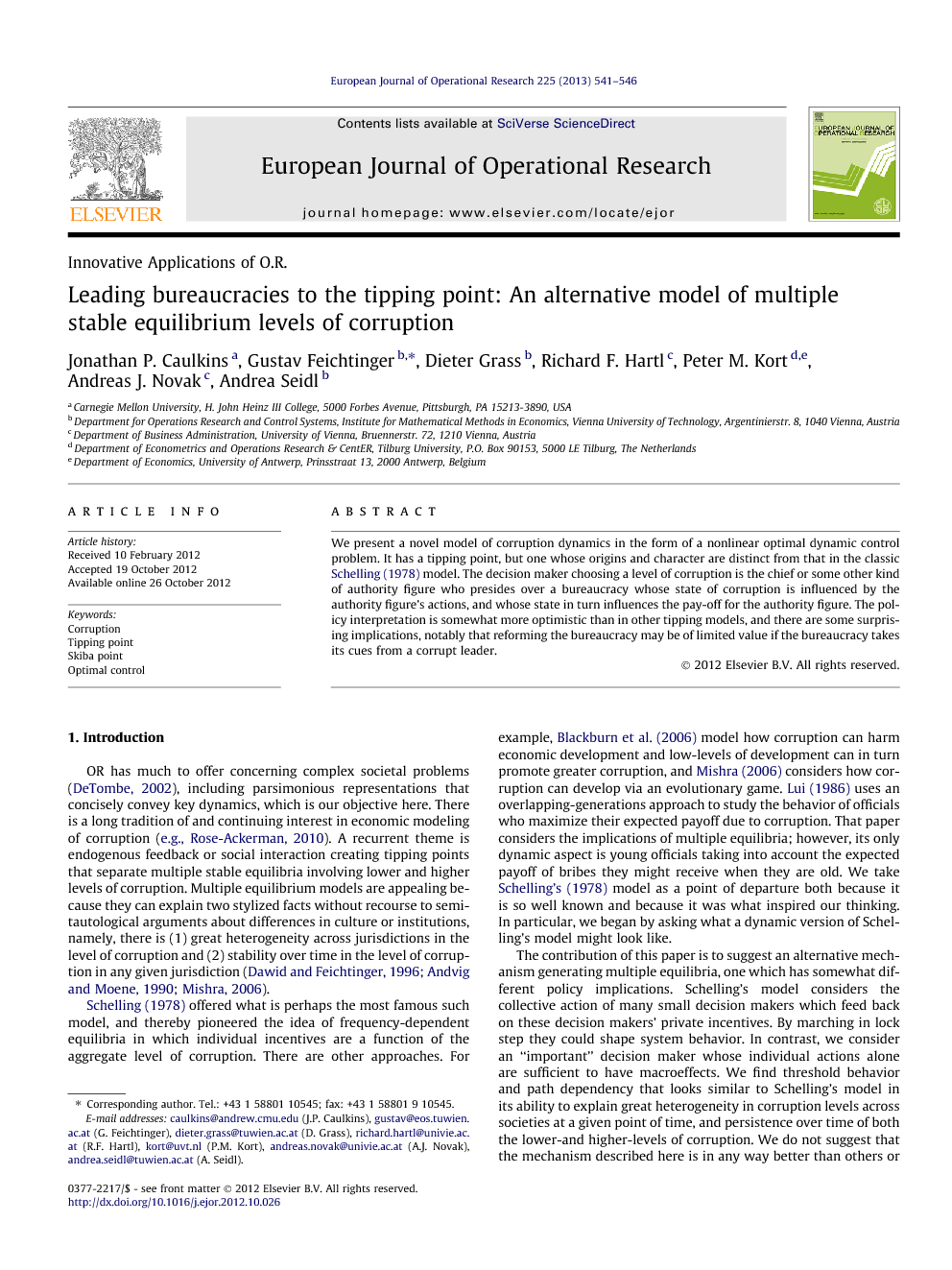 We present a novel model of corruption dynamics in the form of a nonlinear optimal dynamic control problem. It has a tipping point, but one whose origins and character are distinct from that in the classic Schelling (1978) model. The decision maker choosing a level of corruption is the chief or some other kind of authority figure who presides over a bureaucracy whose state of corruption is influenced by the authority figure’s actions, and whose state in turn influences the pay-off for the authority figure. The policy interpretation is somewhat more optimistic than in other tipping models, and there are some surprising implications, notably that reforming the bureaucracy may be of limited value if the bureaucracy takes its cues from a corrupt leader.

OR has much to offer concerning complex societal problems (DeTombe, 2002), including parsimonious representations that concisely convey key dynamics, which is our objective here. There is a long tradition of and continuing interest in economic modeling of corruption (e.g., Rose-Ackerman, 2010). A recurrent theme is endogenous feedback or social interaction creating tipping points that separate multiple stable equilibria involving lower and higher levels of corruption. Multiple equilibrium models are appealing because they can explain two stylized facts without recourse to semi-tautological arguments about differences in culture or institutions, namely, there is (1) great heterogeneity across jurisdictions in the level of corruption and (2) stability over time in the level of corruption in any given jurisdiction (Dawid and Feichtinger, 1996, Andvig and Moene, 1990 and Mishra, 2006). Schelling (1978) offered what is perhaps the most famous such model, and thereby pioneered the idea of frequency-dependent equilibria in which individual incentives are a function of the aggregate level of corruption. There are other approaches. For example, Blackburn et al. (2006) model how corruption can harm economic development and low-levels of development can in turn promote greater corruption, and Mishra (2006) considers how corruption can develop via an evolutionary game. Lui (1986) uses an overlapping-generations approach to study the behavior of officials who maximize their expected payoff due to corruption. That paper considers the implications of multiple equilibria; however, its only dynamic aspect is young officials taking into account the expected payoff of bribes they might receive when they are old. We take Schelling’s (1978) model as a point of departure both because it is so well known and because it was what inspired our thinking. In particular, we began by asking what a dynamic version of Schelling’s model might look like. The contribution of this paper is to suggest an alternative mechanism generating multiple equilibria, one which has somewhat different policy implications. Schelling’s model considers the collective action of many small decision makers which feed back on these decision makers’ private incentives. By marching in lock step they could shape system behavior. In contrast, we consider an “important” decision maker whose individual actions alone are sufficient to have macroeffects. We find threshold behavior and path dependency that looks similar to Schelling’s model in its ability to explain great heterogeneity in corruption levels across societies at a given point of time, and persistence over time of both the lower-and higher-levels of corruption. We do not suggest that the mechanism described here is in any way better than others or even that the various mechanisms are mutually exclusive. Perhaps several mechanisms can play a role. Rather, we seek only to provide a concise description of this alternative mechanism. The next section explains our model. The model takes the form of a linear-quadratic optimal dynamic control problem, so its qualitative solution structure can be derived analytically, as seen in Section 3. Section 4 concludes with the model’s implications for a higher-level social planner or reformer who prefers for society to be in a low-corruption state. The social planner could be a constitutional convention designing the framework for a new system of government or an altruistic individual or agency that acts to monitor and respond to institutional corruption. In general, the present model offers somewhat greater optimism about the potential for a corrupt society to be pulled back to a low-corruption state.

We considered a corruption model inspired by, but distinct from, Schelling’s (1978) classic model. In our model the only optimizing decision maker is the senior political leader, and that leader receives two distinct types of benefits from corruption, that which depends directly and only on his or her own actions and those which are creamed from a bureaucracy that in turn collects bribes from the populace. Likewise, the leader suffers (convex) costs from both his or her own corruption and from the degree of corruption in the bureaucracy. The bureaucrats’ decisions are not modeled explicitly; they take their cues from the senior leadership, adjusting the level of corruption over time to conform to the leader’s example. Structurally, four types of solutions are possible: (1) No corruption, (2) Maximum corruption, (3) An intermediate amount of corruption, and (4) Path dependency involving a Skiba point, reminiscent of the original Schelling (1978) model. Path dependency occurs only when there is a synergistic interaction between the degree of corruption of the leader and that of the bureaucracy, such as when the leader extracts a share of the bribes collected by the corrupt bureaucracy. Path dependency, when it exists, takes the following form. If the level of corruption in the bureaucracy is initially below this critical level, then it is optimal for the leader to be relatively clean, and corruption will ebb toward zero. The decision maker may not be entirely honest; he or she might initially extract some bribes while the overall culture of corruption is still relatively high, but both the leader and bureaucracy become less corrupt over time, with the leader ceasing corrupt activity before the bureaucracy does. On the other hand, if initially the bureaucracy’s level of corruption exceeds this Skiba threshold, then it is in the leader’s self-interest to exploit the resulting income-generating possibility by also being corrupt, with the result that both the leader and the bureaucracy will become increasingly corrupt over time. Schelling’s model illustrated micro-motives and macrobehavior, in which the collective action of many small decision makers fed back on those decision makers’ private incentives. Schelling’s decision makers were too small to influence the system individually, but if all such actors marched in lock step they could shape system behavior. Here, in contrast, we model an “important” decision maker whose individual actions alone are sufficient to have macroeffects. Those effects feed back on the decision maker’s incentives. The result is threshold behavior and path dependency that would look from the outside very much like Schelling’s model in its ability to explain great heterogeneity in corruption levels across societies at a given point of time, and persistence over time of both the lower-and higher-levels of corruption. For any given leader, the policy conclusions are similar to those of Schelling’s model. A society stuck in the high-corruption equilibrium will stay there unless and until there is some powerful change that pushes the system up and over the tipping point and down the other side. However, our model does not involve “enforcement swamping” (Kleiman, 1993 and Kleiman, 2009), so the magnitude of the required surge may be less extreme. Our model also admits a story of individual reformers. Suppose a reform minded individual wins political leadership, meaning someone for whom the private gains of corruption are not appealing (α and β small). If that person remains in power long enough for the bureaucracy’s corruption to fall below the tipping point, then subsequent administrations may be corruption-free even if they are led by people of average ethical character. Conversely, one particularly venal leader could, if in power long enough, have such a bad effect on an originally clean bureaucracy as to make high-levels of corruption a stable fixture of that society at least until an extraordinary reformer came on the scene. So in some respects our model is slightly less pessimistic than Schelling’s (1978) model regarding the prospects for pulling a corrupt society back to a low-corruption steady state. It does warn, though, that if the political leader sets the tone for the bureaucracy’s level of corruption, then even if the bureaucracy’s corruption synergistically enhances the leader’s rewards from being corrupt, “draining the swamp” by expelling corrupt bureaucrats may not be effective. When corruption flows from the top, the reforms may need to target the top leadership.