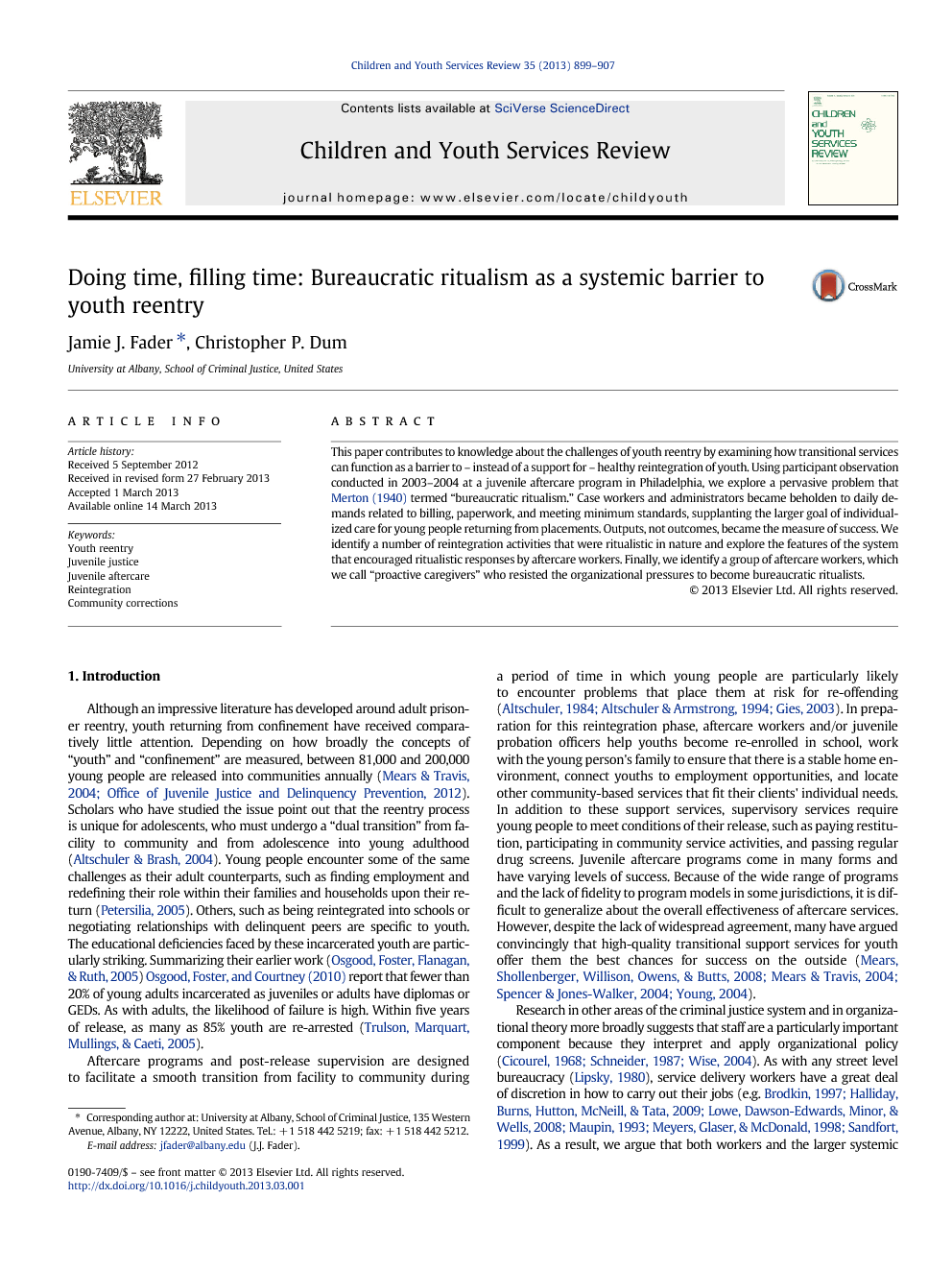 This paper contributes to knowledge about the challenges of youth reentry by examining how transitional services can function as a barrier to – instead of a support for – healthy reintegration of youth. Using participant observation conducted in 2003–2004 at a juvenile aftercare program in Philadelphia, we explore a pervasive problem that Merton (1940) termed “bureaucratic ritualism.” Case workers and administrators became beholden to daily demands related to billing, paperwork, and meeting minimum standards, supplanting the larger goal of individualized care for young people returning from placements. Outputs, not outcomes, became the measure of success. We identify a number of reintegration activities that were ritualistic in nature and explore the features of the system that encouraged ritualistic responses by aftercare workers. Finally, we identify a group of aftercare workers, which we call “proactive caregivers” who resisted the organizational pressures to become bureaucratic ritualists.

Although an impressive literature has developed around adult prisoner reentry, youth returning from confinement have received comparatively little attention. Depending on how broadly the concepts of “youth” and “confinement” are measured, between 81,000 and 200,000 young people are released into communities annually (Mears and Travis, 2004 and Office of Juvenile Justice and Delinquency Prevention, 2012). Scholars who have studied the issue point out that the reentry process is unique for adolescents, who must undergo a “dual transition” from facility to community and from adolescence into young adulthood (Altschuler & Brash, 2004). Young people encounter some of the same challenges as their adult counterparts, such as finding employment and redefining their role within their families and households upon their return (Petersilia, 2005). Others, such as being reintegrated into schools or negotiating relationships with delinquent peers are specific to youth. The educational deficiencies faced by these incarcerated youth are particularly striking. Summarizing their earlier work (Osgood, Foster, Flanagan, & Ruth, 2005) Osgood, Foster, and Courtney (2010) report that fewer than 20% of young adults incarcerated as juveniles or adults have diplomas or GEDs. As with adults, the likelihood of failure is high. Within five years of release, as many as 85% youth are re-arrested (Trulson, Marquart, Mullings, & Caeti, 2005). Aftercare programs and post-release supervision are designed to facilitate a smooth transition from facility to community during a period of time in which young people are particularly likely to encounter problems that place them at risk for re-offending (Altschuler, 1984, Altschuler and Armstrong, 1994 and Gies, 2003). In preparation for this reintegration phase, aftercare workers and/or juvenile probation officers help youths become re-enrolled in school, work with the young person's family to ensure that there is a stable home environment, connect youths to employment opportunities, and locate other community-based services that fit their clients' individual needs. In addition to these support services, supervisory services require young people to meet conditions of their release, such as paying restitution, participating in community service activities, and passing regular drug screens. Juvenile aftercare programs come in many forms and have varying levels of success. Because of the wide range of programs and the lack of fidelity to program models in some jurisdictions, it is difficult to generalize about the overall effectiveness of aftercare services. However, despite the lack of widespread agreement, many have argued convincingly that high-quality transitional support services for youth offer them the best chances for success on the outside (Mears et al., 2008, Mears and Travis, 2004, Spencer and Jones-Walker, 2004 and Young, 2004). Research in other areas of the criminal justice system and in organizational theory more broadly suggests that staff are a particularly important component because they interpret and apply organizational policy (Cicourel, 1968, Schneider, 1987 and Wise, 2004). As with any street level bureaucracy (Lipsky, 1980), service delivery workers have a great deal of discretion in how to carry out their jobs (e.g. Brodkin, 1997, Halliday et al., 2009, Lowe et al., 2008, Maupin, 1993, Meyers et al., 1998 and Sandfort, 1999). As a result, we argue that both workers and the larger systemic context in which reentry organizations operate are important, but largely overlooked, aspects of youth reentry. In this article, we examine the obstacles to successful reentry from the perspectives of juvenile aftercare workers as they responded to the organizational dilemmas and constraints posed by the juvenile justice system in one large jurisdiction. Our findings suggest that a pervasive problem in the system of aftercare services is what Merton (1940) termed “bureaucratic ritualism,” where the goals of the organization or system are replaced by rigid adherence to rules. Workers and administrators become beholden to daily demands related to billing, paperwork, and meeting minimum standards, losing sight of the larger picture of providing individualized care to vulnerable young people returning home from residential placements. We identify a number of reintegration activities that are ritualistic in nature and explore the features of the system that encourage ritualistic responses by aftercare workers. We describe a group of aftercare workers, which we call “proactive caregivers” who resist the organizational pressures to become bureaucratic ritualists. Finally, we discuss the promising role of such workers in improving the quality and effectiveness of aftercare services.