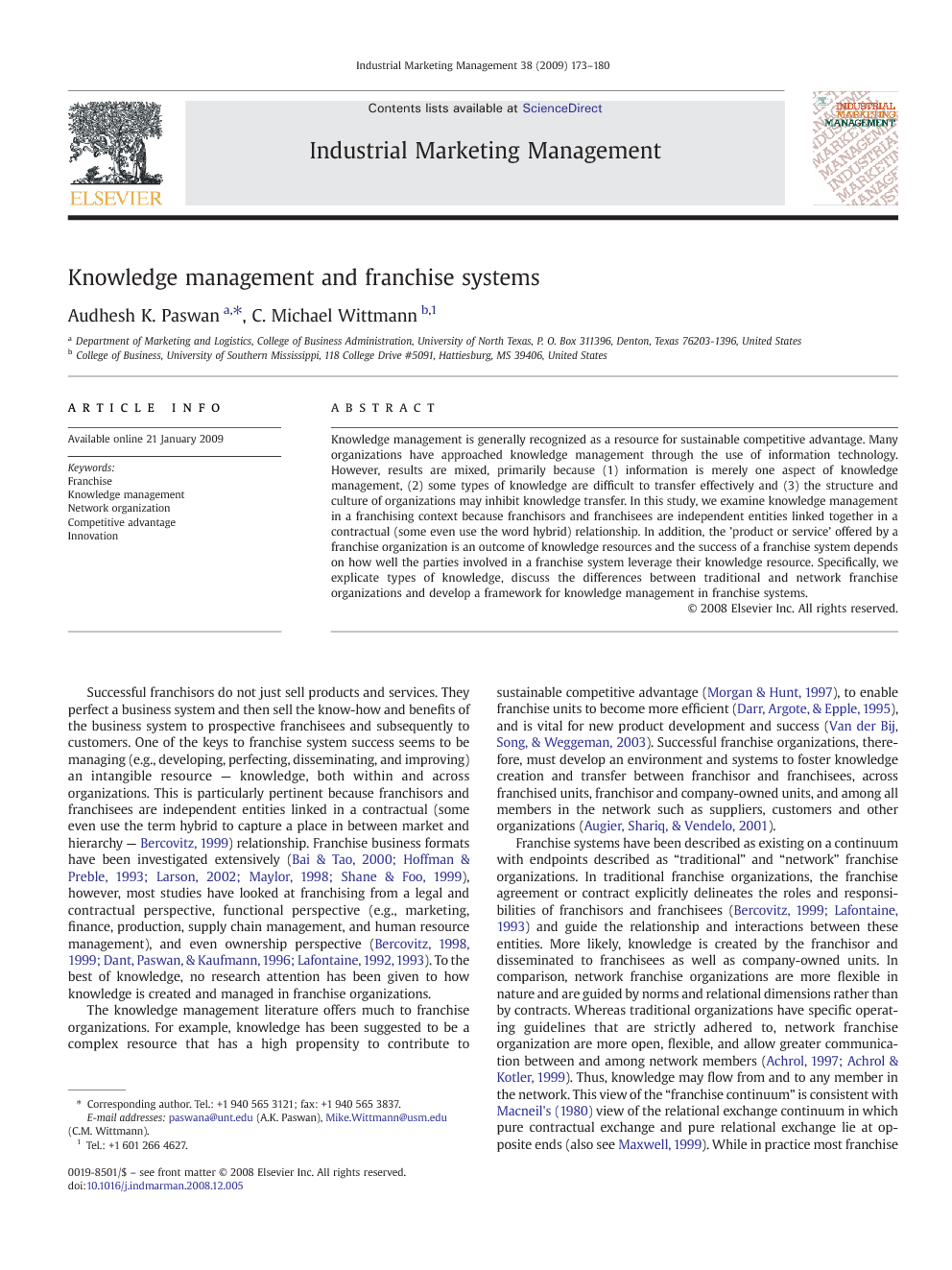 Successful franchisors do not just sell products and services. They perfect a business system and then sell the know-how and benefits of the business system to prospective franchisees and subsequently to customers. One of the keys to franchise system success seems to be managing (e.g., developing, perfecting, disseminating, and improving) an intangible resource — knowledge, both within and across organizations. This is particularly pertinent because franchisors and franchisees are independent entities linked in a contractual (some even use the term hybrid to capture a place in between market and hierarchy — Bercovitz, 1999) relationship. Franchise business formats have been investigated extensively (Bai and Tao, 2000, Hoffman and Preble, 1993, Larson, 2002, Maylor, 1998 and Shane and Foo, 1999), however, most studies have looked at franchising from a legal and contractual perspective, functional perspective (e.g., marketing, finance, production, supply chain management, and human resource management), and even ownership perspective (Bercovitz, 1998, Bercovitz, 1999, Dant et al., 1996, Lafontaine, 1992 and Lafontaine, 1993). To the best of knowledge, no research attention has been given to how knowledge is created and managed in franchise organizations. The knowledge management literature offers much to franchise organizations. For example, knowledge has been suggested to be a complex resource that has a high propensity to contribute to sustainable competitive advantage (Morgan & Hunt, 1997), to enable franchise units to become more efficient (Darr, Argote, & Epple, 1995), and is vital for new product development and success (Van der Bij, Song, & Weggeman, 2003). Successful franchise organizations, therefore, must develop an environment and systems to foster knowledge creation and transfer between franchisor and franchisees, across franchised units, franchisor and company-owned units, and among all members in the network such as suppliers, customers and other organizations (Augier, Shariq, & Vendelo, 2001). Franchise systems have been described as existing on a continuum with endpoints described as “traditional” and “network” franchise organizations. In traditional franchise organizations, the franchise agreement or contract explicitly delineates the roles and responsibilities of franchisors and franchisees (Bercovitz, 1999 and Lafontaine, 1993) and guide the relationship and interactions between these entities. More likely, knowledge is created by the franchisor and disseminated to franchisees as well as company-owned units. In comparison, network franchise organizations are more flexible in nature and are guided by norms and relational dimensions rather than by contracts. Whereas traditional organizations have specific operating guidelines that are strictly adhered to, network franchise organization are more open, flexible, and allow greater communication between and among network members (Achrol, 1997 and Achrol and Kotler, 1999). Thus, knowledge may flow from and to any member in the network. This view of the “franchise continuum” is consistent with Macneil's (1980) view of the relational exchange continuum in which pure contractual exchange and pure relational exchange lie at opposite ends (also see Maxwell, 1999). While in practice most franchise organizations will lie somewhere in between, comparison of organizations at the endpoints provides a foundation for better understanding of knowledge management in franchise systems. The purpose of this research is to develop a framework that purports to explain knowledge transfer in franchise organizations. Towards this goal, we integrate research from the knowledge and information management (Augier et al., 2001, Herschel et al., 2001, Menon and Varadarajan, 1992, October and Nonaka, 1994) and franchise and business network research streams (Achrol, 1996, Achrol, 1997, Achrol and Kotler, 1999, Anderson et al., 1994, October, Miles and Snow, 1992, Paswan et al., 2003, Snow, 1997, Snow et al., 1992 and Walker, 1997 ). Specifically, we first provide an overview of knowledge management literature followed by its implications for competitive advantage. Next, we discuss the traditional and network type of franchise organizations and develop research propositions (see Table 1). We conclude with a discussion of a research agenda and limitations.