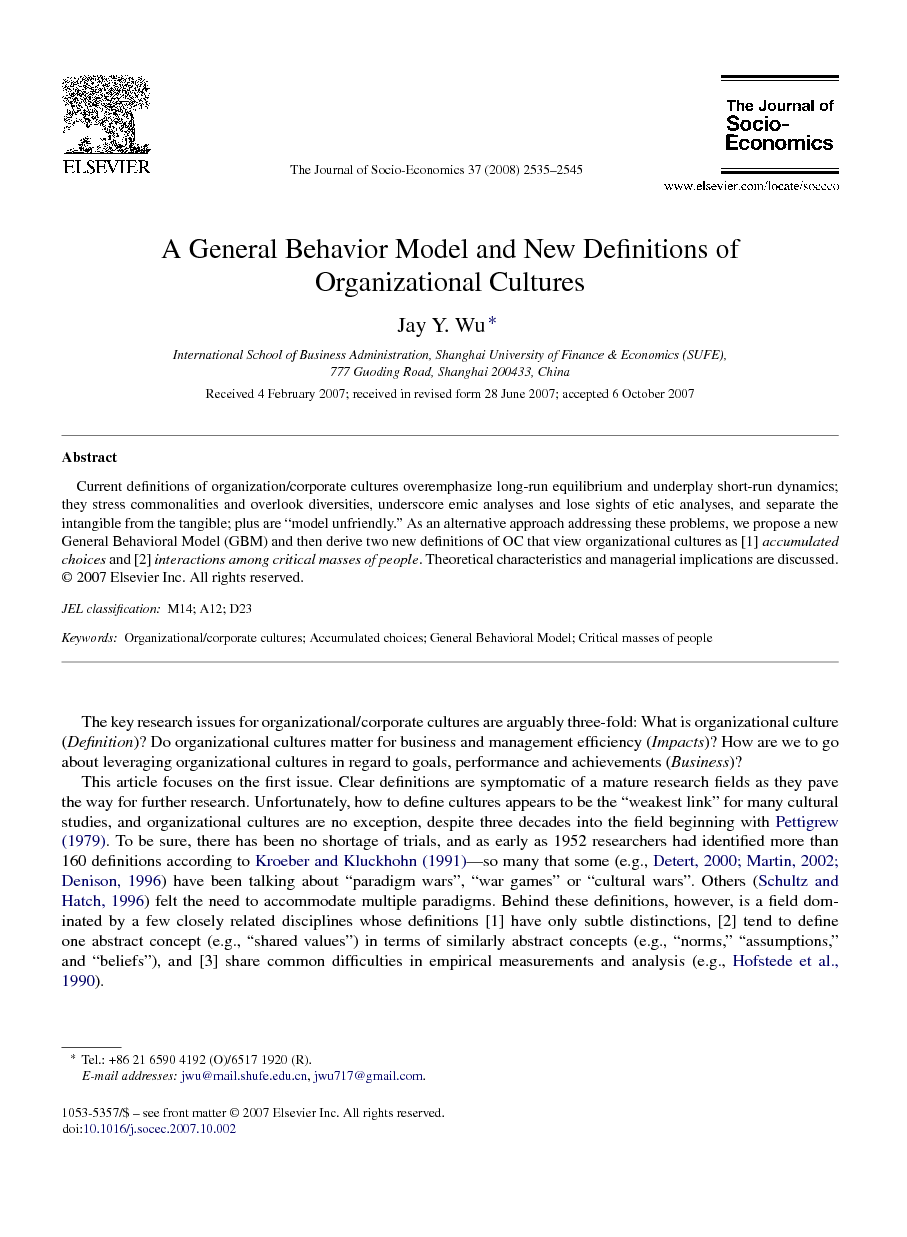 Current definitions of organization/corporate cultures overemphasize long-run equilibrium and underplay short-run dynamics; they stress commonalities and overlook diversities, underscore emic analyses and lose sights of etic analyses, and separate the intangible from the tangible; plus are “model unfriendly.” As an alternative approach addressing these problems, we propose a new General Behavioral Model (GBM) and then derive two new definitions of OC that view organizational cultures as [1] accumulated choices and [2] interactions among critical masses of people. Theoretical characteristics and managerial implications are discussed.

1.1. Introducing GBM We now present an axiomatic model that may be called the “General Behavioral Model”. In its symbolic form we have: equation(1) View the MathML sourceyt,i=f∑k=1K1yt−k,i∑k=0K2pt−k,if∑k=0K3∑j≠iJxt−k,j, ∑k=0K4τt−k Turn MathJax on The left hand side denotes a particular behavior of the ith individual at time t. In an organization, this could be a top executive's untruthful quarterly finance report to Wall Street, or, in a more positive spirit, an employee's decision to stay extra hours until clients’ problems get fixed. Terms on the right hand side are divided into three sets by two vertical lines, where terms before the vertical line are conditional upon the terms after. Thus, the first term denotes the same ith individual's similar, related, or identical behavior at previous times (from one up to K1 steps back in one's lifetime). Using the same examples, this could be the executives’ untruthful move in the previous quarters. The next p stands for (personal) preferences of the same ith individual at present time t as well as at previous times (up to K2, which may or may not equal K1), as revealed or stated from past behaviors under similar tradeoff situations. The third term is a complex function (note the extra ‘f’ in front of the nested parenthesis) of two terms. One sigma (∑) collects impacts along time from the instantaneous t to a potentially long way (up to K3 steps, ∀K3 > K1; ∀K3 > K1, considering that aggregates last longer than individuals) back, and another stands for the “critical masses of people” or a function of social aggregates excluding the ith individual. The last term, τ, separated by a comma, represents resource constraints, including natural, technical, and situational constraints facing the ith individual at time t and possibly before that (up to K4, ∀K4 ≤ K1, considering that the constraints for any particular behavior last shorter than one's lifetime, steps back). In words, the GBM says one's current behavior is contingent on his/her past behaviors, his/her revealed and stated preferences, the aggregates’ influences and external factors or resource constraints either shared or unique to each behavior/person. Fig. 1 below shows the GBM graphically.