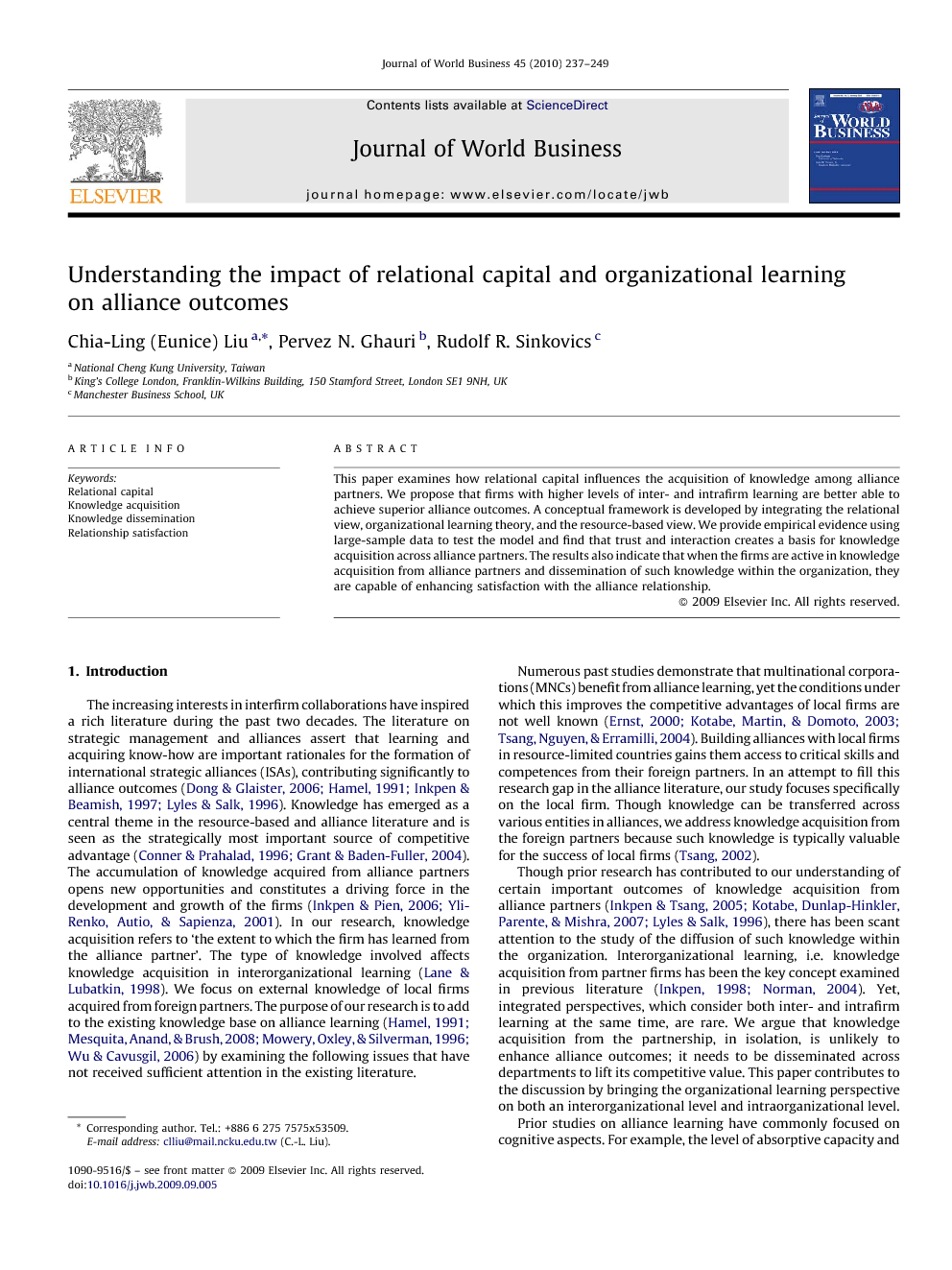 This paper examines how relational capital influences the acquisition of knowledge among alliance partners. We propose that firms with higher levels of inter- and intrafirm learning are better able to achieve superior alliance outcomes. A conceptual framework is developed by integrating the relational view, organizational learning theory, and the resource-based view. We provide empirical evidence using large-sample data to test the model and find that trust and interaction creates a basis for knowledge acquisition across alliance partners. The results also indicate that when the firms are active in knowledge acquisition from alliance partners and dissemination of such knowledge within the organization, they are capable of enhancing satisfaction with the alliance relationship.

The increasing interests in interfirm collaborations have inspired a rich literature during the past two decades. The literature on strategic management and alliances assert that learning and acquiring know-how are important rationales for the formation of international strategic alliances (ISAs), contributing significantly to alliance outcomes (Dong and Glaister, 2006, Hamel, 1991, Inkpen and Beamish, 1997 and Lyles and Salk, 1996). Knowledge has emerged as a central theme in the resource-based and alliance literature and is seen as the strategically most important source of competitive advantage (Conner and Prahalad, 1996 and Grant and Baden-Fuller, 2004). The accumulation of knowledge acquired from alliance partners opens new opportunities and constitutes a driving force in the development and growth of the firms (Inkpen and Pien, 2006 and Yli-Renko et al., 2001). In our research, knowledge acquisition refers to ‘the extent to which the firm has learned from the alliance partner’. The type of knowledge involved affects knowledge acquisition in interorganizational learning (Lane & Lubatkin, 1998). We focus on external knowledge of local firms acquired from foreign partners. The purpose of our research is to add to the existing knowledge base on alliance learning (Hamel, 1991, Mesquita et al., 2008, Mowery et al., 1996 and Wu and Cavusgil, 2006) by examining the following issues that have not received sufficient attention in the existing literature. Numerous past studies demonstrate that multinational corporations (MNCs) benefit from alliance learning, yet the conditions under which this improves the competitive advantages of local firms are not well known (Ernst, 2000, Kotabe et al., 2003 and Tsang et al., 2004). Building alliances with local firms in resource-limited countries gains them access to critical skills and competences from their foreign partners. In an attempt to fill this research gap in the alliance literature, our study focuses specifically on the local firm. Though knowledge can be transferred across various entities in alliances, we address knowledge acquisition from the foreign partners because such knowledge is typically valuable for the success of local firms (Tsang, 2002). Though prior research has contributed to our understanding of certain important outcomes of knowledge acquisition from alliance partners (Inkpen and Tsang, 2005, Kotabe et al., 2007 and Lyles and Salk, 1996), there has been scant attention to the study of the diffusion of such knowledge within the organization. Interorganizational learning, i.e. knowledge acquisition from partner firms has been the key concept examined in previous literature (Inkpen, 1998 and Norman, 2004). Yet, integrated perspectives, which consider both inter- and intrafirm learning at the same time, are rare. We argue that knowledge acquisition from the partnership, in isolation, is unlikely to enhance alliance outcomes; it needs to be disseminated across departments to lift its competitive value. This paper contributes to the discussion by bringing the organizational learning perspective on both an interorganizational level and intraorganizational level. Prior studies on alliance learning have commonly focused on cognitive aspects. For example, the level of absorptive capacity and the complexity of knowledge affect knowledge transfer between partners (Lane et al., 2001 and Simonin, 2004). Relation-capital investments are critical in knowledge acquisition, especially in turbulent environments (Dhanaraj, Lyles, Steensma, & Tihanyi, 2004). Relational capital in alliances refers to a relational rent generated in an exchange relationship that cannot be generated by either firm in isolation (Dyer & Singh, 1998). Relational capital has been identified as a resource that is created through social network processes (Dyer and Singh, 1998 and Wathne and Heide, 2004). We identify three key dimensions of relational capital essential to alliance learning: trust, transparency, and interaction. We examine the link between these three factors and the role of relational capital in acquiring knowledge from foreign partners. We also believe that the literature dealing with relational capital, learning and alliance outcomes has not been integrated in a systematic fashion, leaving gaps in the understanding of the links among the concepts. Some stress the linkage between relationship development and knowledge transfer in alliances (Dyer and Hatch, 2006, Sarkar et al., 2001 and Uzzi and Lancaster, 2003), and others highlight the connection between knowledge process systems (i.e., knowledge acquisition and sharing) and alliance satisfaction (Inkpen and Pien, 2006, Lyles and Salk, 1996 and Norman, 2004). The former links the relational view and organizational learning theory; the latter links organization learning theory and the resource-based view. Very few attempts, however, have yet been made to relate key concepts from the relational view, organizational learning theory and the resource-based view. By emphasizing the important link between relational capital, inter- and intrafirm learning and alliance outcomes, we seek to contribute to a further convergence between different domains of research. Specifically, our study pursues the following research questions: (a) how relational capital impacts on the acquisition of knowledge from foreign partners to the local firms, (b) how dimensions of relational capital, specifically trust, transparency, and interaction, between alliance partners interrelate, and (c) how inter- and intrafirm learning influence alliance outcomes.

Based on the previous literature about alliance learning, a holistic framework was first proposed, then empirically modified and tested. One of the major contributions of this article is the integration of different streams of theories from past research. Three dimensions of relational capital (trust, transparency and interaction) are identified from disciplines such as the relational view and relationship-management studies (Cullen et al., 2000, Dyer and Singh, 1998, Kandemir et al., 2002, Roath et al., 2002 and Wathne and Heide, 2004). From the resource-based view, the firm will sustain competitive advantages by acquiring rare resources and accumulating difficult-to-imitate capabilities (Beamish and Kachra, 2004, Conner and Prahalad, 1996, Grant, 1991 and Makadok, 2001). We also adopt the perspective of organizational learning to propose that the firm should not only focus on acquiring new knowledge from its partners but also disseminating such knowledge within the organization (Crossan and Berdrow, 2003, Gold et al., 2001, Nevis et al., 1995 and Walter et al., 2007). Such a model pulls together the main streams of the ISA theories and deals with the intricate cross-links between the various constructs involved. As most of the prior literature on alliance learning is based on research into joint ventures, scholars assert that equity-based arrangements can promote more interfirm knowledge transfer (Buchel and Killing, 2002, Inkpen, 2000, Kogut, 1988 and Mowery et al., 1996). However, this research provides the novel insight that alliance learning is effective within the context of contractual collaborative partnerships between buyers and suppliers. Although the alliance structures and similarities between the alliance partners may facilitate knowledge acquisition, the empirical results of this research suggest that learning opportunities are not limited by the mode or symmetry of the partnerships. Research on international strategic alliances has primarily focused on alliances between partners in developed countries. This adoption of the perspective of resource-rich MNC partners, while excluding the views of their resource-limited NIC partners, has produced conflicting results (Ernst, 2000 and Tsang et al., 2004). This research analyzes what permits resource-limited firms to compete in the highly competitive IT industry from the perspective of Taiwanese IT suppliers. The results show how the local firms compensate for their size-related disadvantages through international linkages with their MNC partners. The extant literature that relates organizational learning to alliance outcomes is relatively inadequate. An early stream of research on the outcome of alliances identified factors that influence alliance stability and duration (Dussauge, Bernard, & Will, 2000). Another stream of research has focused on alliance outcomes as the result of the collaboration process and partner linkage from a more evolutionary view (Doz, 1996 and Dussauge et al., 2000). This research complements prior studies by systematically examining the influences of external knowledge acquisition and internal knowledge dissemination on relationship satisfaction.